When Jonathan Bamba joined Lille from Saint-Etienne in the summer, it was considered one of the best deals of the transfer window. The Ivorian was brought in on a free transfer, having been regarded for years as one of the brightest young talents in French football.

Lille have since reaped the benefits. the forward has made a significant contribution in a team that sit second in Ligue 1, only behind the imperious Paris Saint-Germain. And at 22-years-old, he is likely to continue his upward trajectory.

Bamba’s form this season – he has scored an impressive seven goals in 13 games for Les Dogues – has inevitably attracted the intention of some of Europe’s biggest clubs. We take a look at his strengths, weaknesses and style of play ahead of what could be a big 2019 for the youngster.

Who is Jonathan Bamba?

Patience has been required with the France Under-21 international. He did not truly break through into the Saint-Etienne first team until last season, by which time he had been at the club for six years.

Bamba, who spent six years at hometown club Alfortville before his move to Les Verts in 2011, had several loan spells after making his Ligue 1 debut against PSG in 2015. It was a chance to prove himself, to show that he was worthy of an opportunity at the Stade Geoffrey-Guichard.

That is what he did. At Paris FC, Saint-Trond and Angers, his talent was clear. He was still raw and unpolished, but that would come in time. Saint-Etienne had seen enough, and last season he was finally handed his chance.

Bamba did not waste it. By the end of the campaign, he had scored seven goals and provided nine assists in 34 appearances. He earned a call-up to the France Under-21 squad and played three times. His ability was unquestionable.

But a contract dispute with the club meant that he was, for a short period, dropped to the reserve team. Despite his undoubted importance to the team and his clear potential, there was a suggestion that he might soon be on his way.

“I think he’s very good,” said the club’s manager, Jean-Louis Gasset. “I’ll go out of my way for him to stay here. If I had to give advice to him, it would be to stay here. He can flourish here.”

But Bamba didn't stay. Instead, he chose to join Lille, where he has thrived. Playing predominantly on the left, the forward has already matched his highest tally of goals in a season. And he has scored in big games: two against his former club, and two against Marseille.

If he continues at this rate, expect to see his name in the headlines far more often.

The 22-year-old is equally as comfortable on either his left or right foot. He is quick and skilful, fleet of foot and technically gifted. He can pick a pass, shoot with power and accuracy and dribble past defenders with ease.

In an attacking sense, he has all the attributes required to perform consistently at the top level. Bamba’s directness, his ability to maintain close control of the ball, makes him a constant problem for opposition defenders.

The Frenchmen has significantly increased his goal threat this season, too. His goals per game average is up from 0.24 last season to 0.55, and from fewer total scoring attempts (1.58 per 90 compared with 2.38). He has become more economical in front of goal: his shooting accuracy has increased from 36.7% to 55%.

This is a clear sign of his development. He is shooting less regularly but with more precision; he is becoming refined, closer to the finished article.

It is difficult to avoid given his style of play, but Bamba is prone to losing the ball more often than his teammates would like. He is dispossessed, on average, 3.4 times per 90 minutes.

Given his average number of successful take-ons is just 1.1 per game – Hatem Ben Arfa’s is 5.05 by comparison – a better rate of ball retention might be expected.

The hope is, that should improve with further development and experience. Bamba is still young, still honing his way of playing, and occasional mistakes are inevitable.

What he offers this Lille team far overshadows any minor weak points. 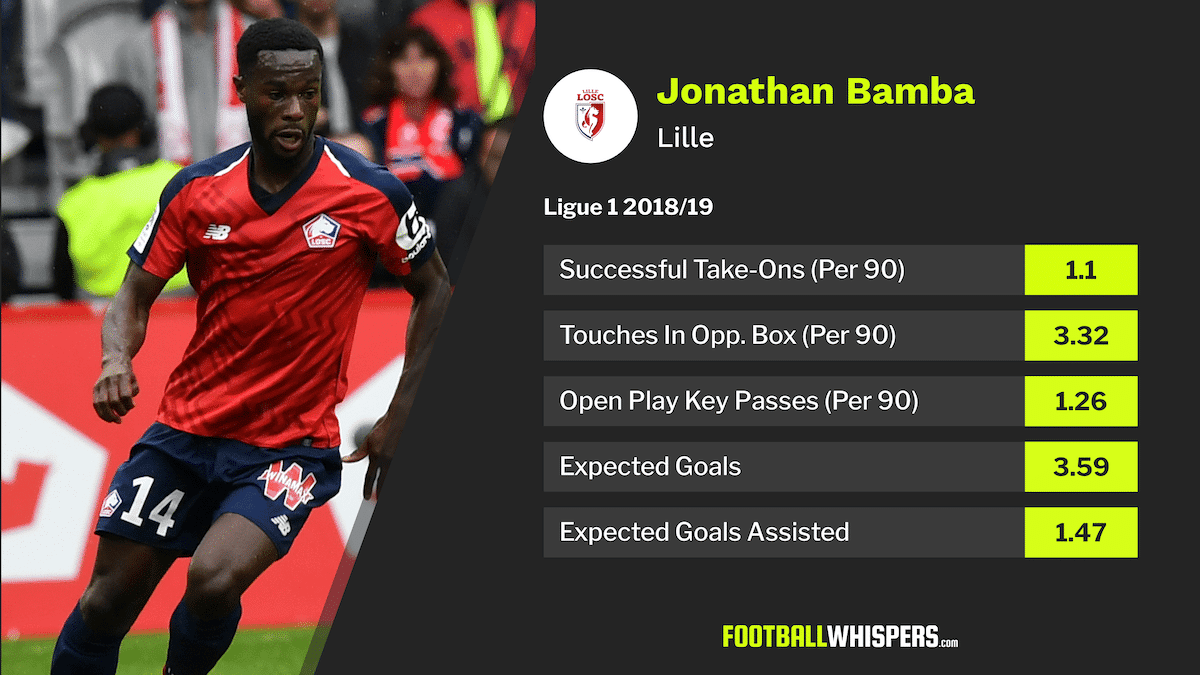 Lille secured Bamba on a five-year deal last summer, so they are clearly in no rush to see him move elsewhere. But demand could soon be high.

Before he joined the northern club, there were rumours of interest from Premier League clubs West Ham United and Crystal Palace, as well as Serie A giants Inter.

And, according to Sport.de, Borussia Dortmund and Napoli are monitoring his progress. A move in the immediate future may be unlikely, but Bamba has already put himself on the radar of some of Europe’s elite clubs.