Few footballers polarise opinion quite like John Stones. To some, he is a liability, a defender without the necessary defensive capacity and a damning symbol of the modern game’s supposed obsession with playing out from the back. To others, he is a ball-playing antidote to English football’s historic preference for simplistic centre-backs and a crucial piece of the strategic jigsaw for Pep Guardiola’s Manchester City.

Somehow it has become difficult to analyse Stones without swaying towards one of these two deeply entrenched camps. However, logic tells us there must be a middle ground, a nuanced shade of grey somewhere between the black and white. At 22 years of age, it isn’t possible to confirm absolutely what Stones’ level is. Instead, what is needed is long-term thinking based on an assessment of his current ability, as well as a willingness to understand and accept the complexity of his situation. 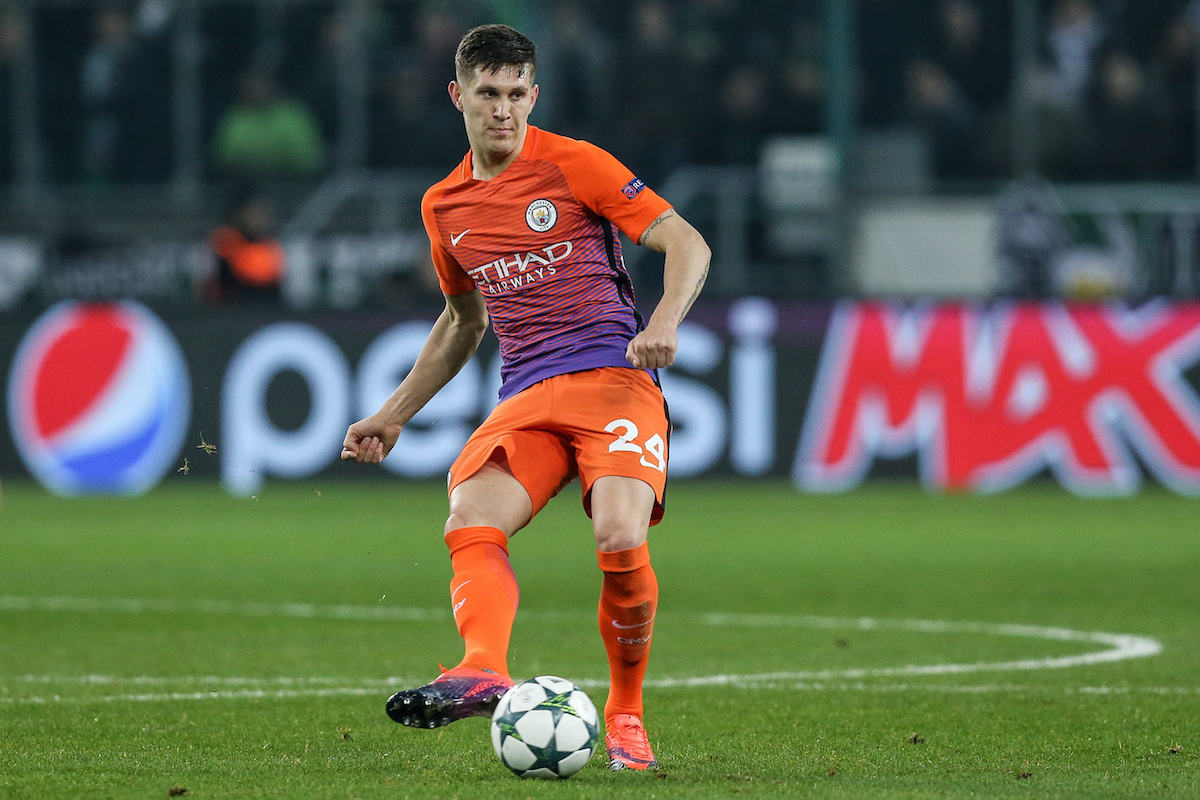 One particular piece of criticism that seems to have stuck with the young defender over the years is the notion that he cannot defend. Before analysing his strengths and weaknesses, it is important to address this criticism. Simplifying Stones’ game to defensive ability is highly reductive, now more than ever considering he plays for Manchester City, who enjoy more possession (60.3 per cent on average according to WhoScored) than any other team in the Premier League.

Of course Stones’ reading of the game, defensive positioning, tackling competence and aerial ability are all relevant, and it’s interesting to note that he actually wins a higher percentage of his attempted tackles than team-mates Nicolas Otamendi and Aleksandar Kolarov.

But these are by no means the only aspects needed to succeed in the back line of a Guardiola system, within which it is equally important, if not more so, to be intelligent in possession, both on and off the ball. The Catalan manager’s footballing ideals are so systemic and all-encompassing that, just as the attackers are expected to contribute effectively to the defensive phase, so too the defenders are expected to contribute effectively to the attacking phase.

Stones is not simply a centre-back. He is, simply, a ball-playing centre-back. This term offers a fairer, fuller description of what he brings to Guardiola’s team, and therefore allows us to critique him based on his role for Manchester City as opposed to outdated or incorrect notions of what the club’s centre-backs should and shouldn’t do. 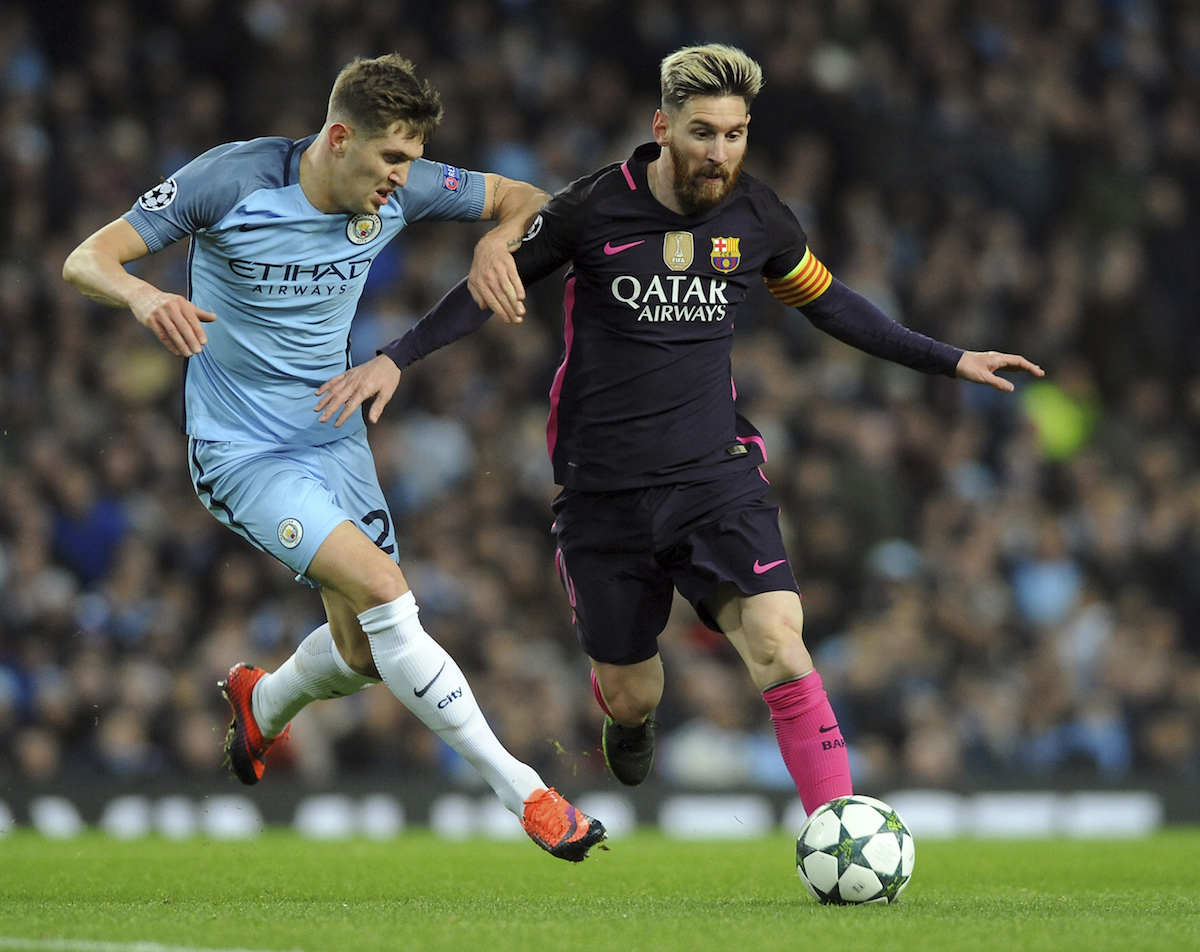 There are a number of highly rated ball-playing centre-backs operating in Europe’s major leagues today who could be used as a frame of reference for Stones, including Bayern Munich’s Jerome Boateng and Mats Hummels, Barcelona’s Gerard Pique, Juventus’ Leonardo Bonucci and Napoli’s Kalidou Koulibaly.

Ignoring their individuals weaknesses (Hummels’ lack of mobility; Koulibaly’s lapses in concentration; etc.), it is possible to identify common qualities across this quintet. All are sound passers combining technical proficiency with game intelligence. They also possess good positional awareness, the ability to drive forward with the ball at feet and composure under pressure.

Stones undoubtedly has a fine range of passing, and is capable of distributing the ball accurately over long and short distances. However, one issue that has arisen more than once during his career thus far has been the communication of his passing. The body position and actions of a player on the ball are their own form of language, one that can be used both to deceive opponents as well as to inform team-mates of where to be. Stones sometimes lacks clarity in this respect, as evidenced below where a mix-up with a simple pass led to a Southampton goal. 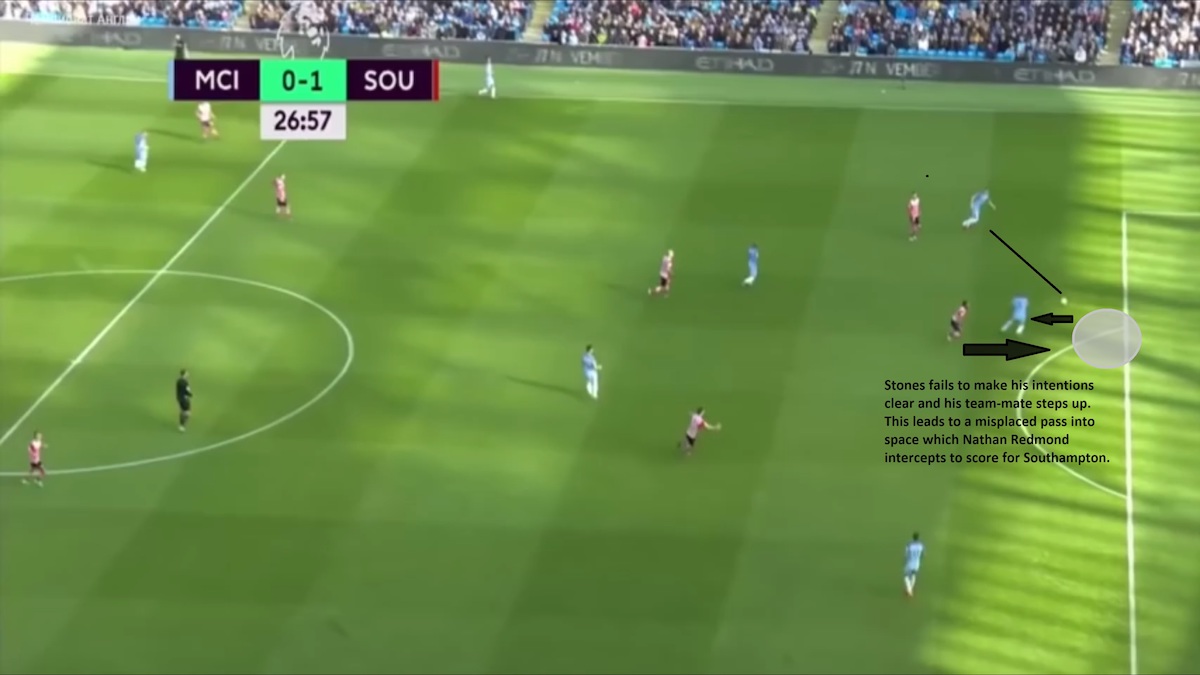 Here, Stones dummies to pass forward before passing back to Fernandinho. However, his dummy deceived his team-mate, who steps up and vacates the space into which Stones sent his pass. Nathan Redmond capitalised, intercepting the ball before scoring for Southampton.

While his passing may at times lack decisiveness, Stones is perceptive when it comes to making himself available for team-mates. He tends to know when and where he is needed, as seen in the below image.

Here, Stones passes the ball back to Wilfredo Caballero and, recognising his goalkeeper’s need for a viable passing lane, reacts instantly by sprinting to his left to offer an option. Guardiola’s sides require clean, progressive build-up and thus the Englishman’s positional understanding in these early stages of possession is crucial to this particular aspect of Manchester City’s play.

Understanding of positioning and space are positive characteristics for any ball-playing centre-back, as is passing accuracy. And, with a 91 percent completion rate, Stones’ passing is more accurate than any other Premier League centre-back. However, he does at times suffer from what is either an unwillingness or inability to spot the penetrative pass.

In order to open up the opposition, Manchester City require their central defenders to play through pressure when possible. This means that, rather than passing around the opposition, they should attempt to play balls into more dangerous central areas behind the opposition’s lines.

Below, Stones is presented with a clear opportunity to do this, but he instead opts for the less effective sideways pass. These passes are far easier to defend as they take place in front of the opposition.

Stones’ occasional proclivity for passing sideways or backwards when a penetrative forward pass is available suggests an unwillingness to take risks. This, however, is not evident in the frequency with which he attacks the opposition’s defensive block.

His marauding forward runs are a bold, if at times wayward, sign of his composure under pressure. Previously he lacked direction but, with the correct instruction, he has the confidence and technical requirements to drive forward and draw out the opposition, creating space behind.

Indeed, not only are his take-on statistics are up on last term, his percentage of take-ons completed has increased dramatically from 74.19 percent to 94.44 percent.

Stones undoubtedly has work to do, but he does possess many of the necessary attributes to become a high-quality ball-playing centre-back. And, while his form has wavered this season, it would be wrong to blame any individual when considering the existence of holistic problems — it’s no coincidence that Stones’ season has mirrored that of Manchester City as a team, starting well before fading quickly.

It’s also worth noting that opponents have targeted him, as Everton’s Romelu Lukaku did (see below image) in the knowledge that he is his team’s best player when it comes to bringing possession forward from the back. 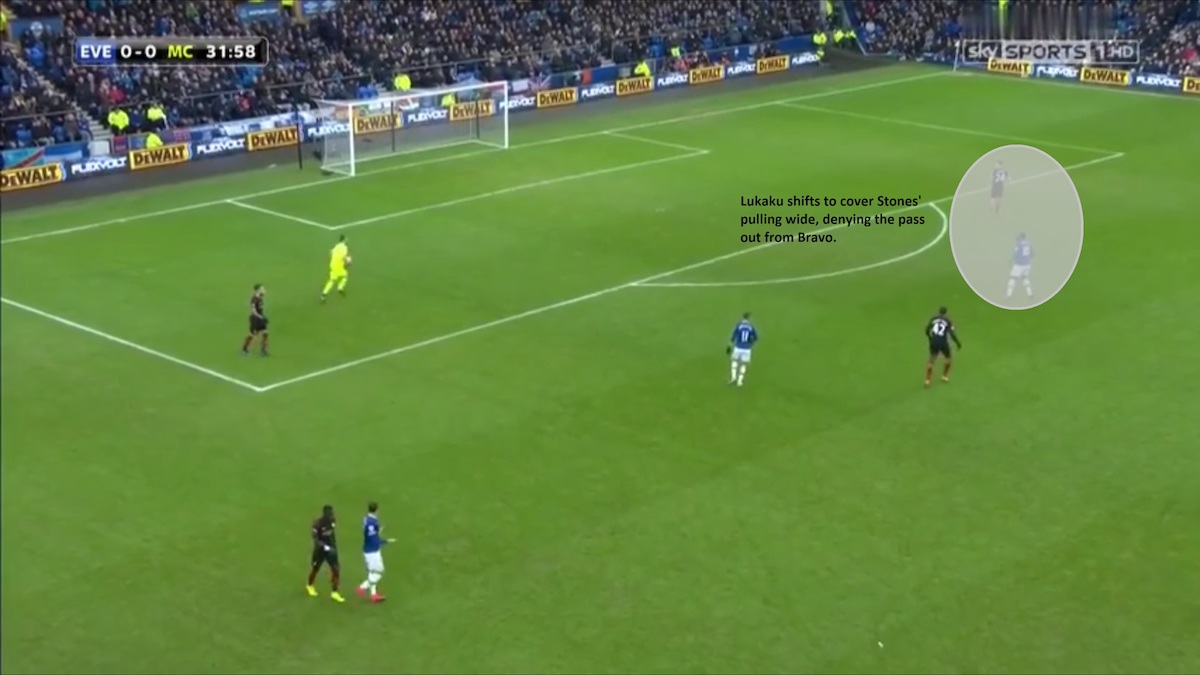 Guardiola is an intense coach with very specific stylistic demands, but he is also a visionary with a history of devoting time to the development of his passion projects.

Under his auspices, Pique went from Manchester United reject to Barcelona regular, while Boateng went from error-prone to majestic working with him at Bayern Munich. It is not outside the realms of possibility that Stones could undergo a similar transformation, especially when considering the manager’s own words. 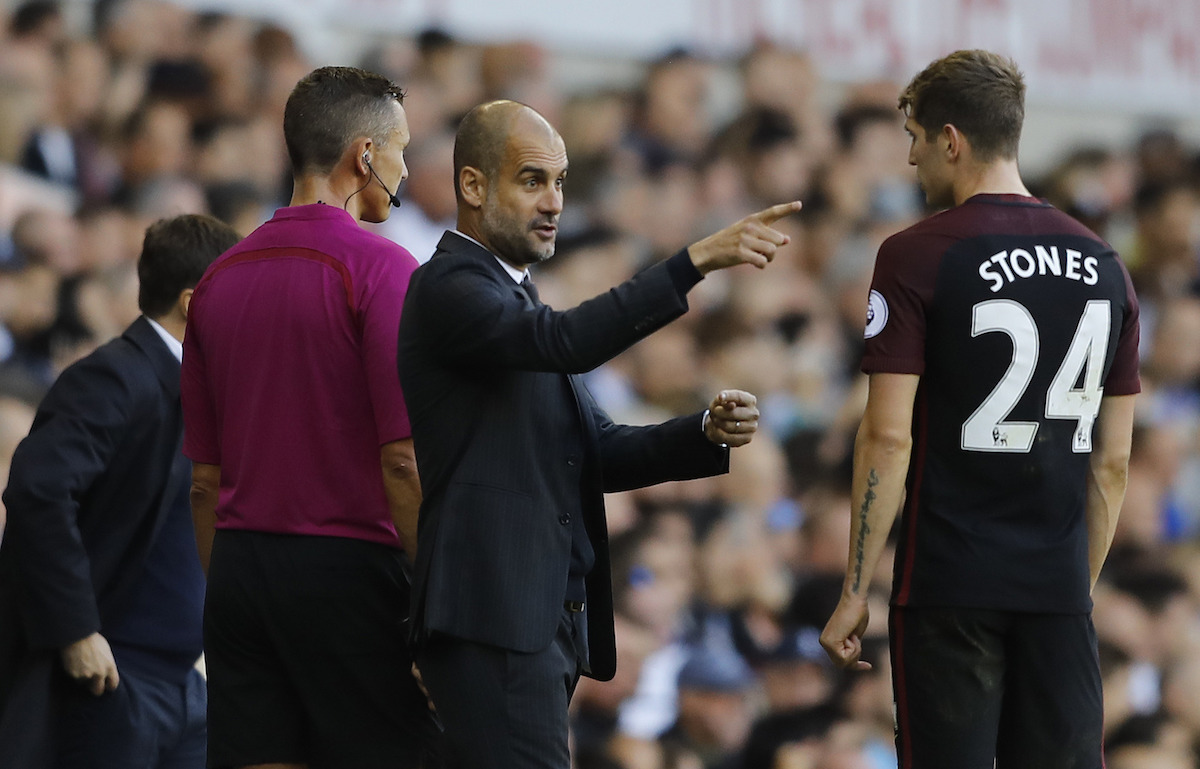 “He’s young, he has to improve but he’s open and has a lot of personality,” Guardiola told the Simon Bajkowski of the Manchester Evening News when asked about Stones. “All the big clubs buy huge players. John is one of them, I don’t have doubts about that.”

All statistics provided by Squawka unless otherwise stated.