England’s centre-back wanders out of defence with the ball at his feet, pointing in both directions as to where he wants his team-mates to move to in order to avoid Lithuania’s narrow midfield.

The position game has been drilled into him by Pep Guardiola, his manager at club level, who spends his time on the sidelines in both training and matches barking orders to his young defender.

Before he joined Manchester City, John Stones was a good ball playing centre-back who, after the most promising of starts at Everton, had developed a tendency to be over-confident, careless, and cavalier. This lead to accusations that, if anything, he spends too much time on the ball.

But the raw abilities were there, and the rawest of all was what attracted Guardiola to this unlikely English libero.

“John Stones has more personality than all of us in this room put together, more balls than everyone here. I like that. I love him,” said the Catalan manager following a draw at home to Liverpool during his first season in Manchester.

“Under pressure, the people criticise him, so I am delighted to have John. With all his huge amount of mistakes. I love him. I love guys with this personality. Because it's not easy to play central defender with this manager. It's not easy. You have to defend 40 metres behind and make the build-up.”

Heading into the new season the critics have turned into champions, and at international level the new kid on the block is no longer trying impossible balls to poorly positioned team-mates – he’s telling them where to go to receive a pass first.

At club level his team-mates are a great help, but in the recent international break it was evidentH the same structure isn’t in place with England.

The likes of Stones, Raheem Sterling, and the man who Guardiola is trying to turn into an English Dani Alves, Kyle Walker, could be as important as their coach to his countries team development – just as Adam Lallana has improved England thanks to his own club manager, Jürgen Klopp.

Gareth Southgate hand long been planning the use of a back three with England and early qualification meant he got to try the system a game sooner than he might have anticipated.

Stones wears the number six shirt for England, and the positional term “No.6” is now regularly used to describe a deep-lying midfielder. Playing in the sweeper role could allow him to do both defensive and midfield duties.

The image below is one of several examples from England's final World cup Qualifier against Lithuania where Stones is carrying the ball out from the back while simultaneously telling his team-mates where to move.

Harry Winks (7) was impressive on his debut, and has already moved into a favourable position from an earlier order, but on the right side Jordan Henderson is poorly positioned. He's blocking off the pass out to the right full-back, and should be in the area Stones is pointing to, circled. 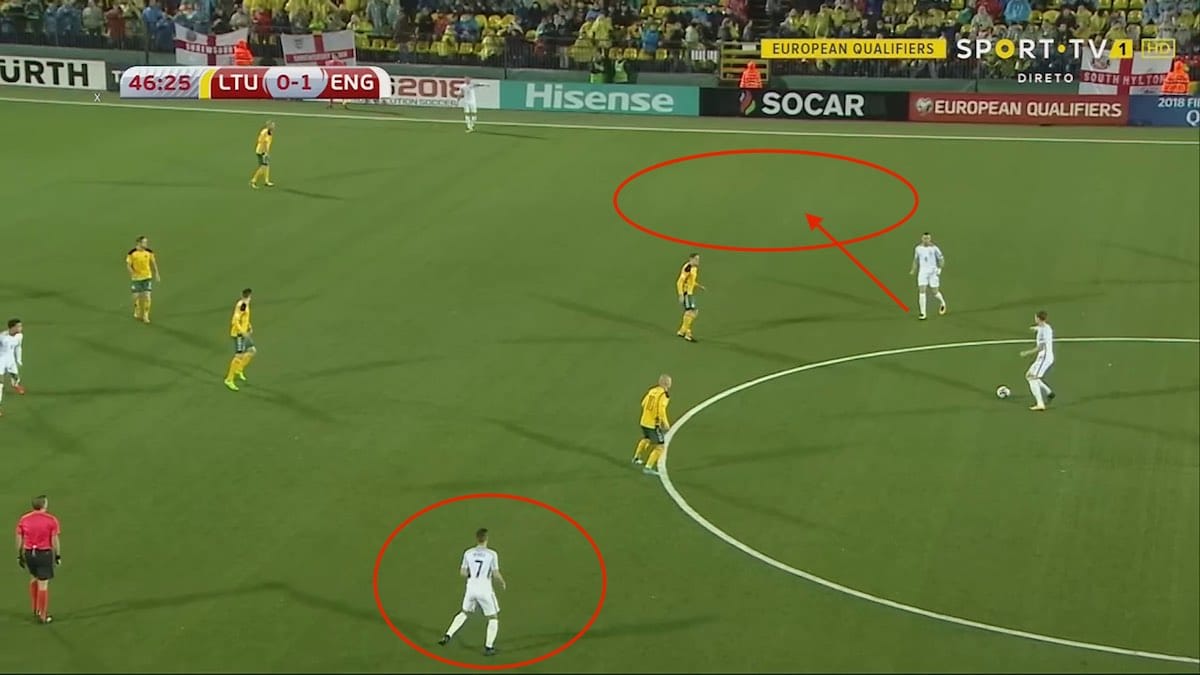 The centre-backs out of the picture bottom left and top right are providing more than enough defensive cover, leaving Henderson and Winks free to move into the half-space on each side.

At City, thanks to their manager’s meticulous training, they are all on the same page; moving into spaces to receive passes, before working the ball up the pitch into dangerous areas; to dangerous players.

Glen Hoddle, searching desperately for something to say during the drab victory in Lithuania, promoted the ball-playing potential in the wide areas of Southgate’s back three. But the best position for England to carry the ball out from the back would be from the centre. Stones has regularly played there for his club, and is the first choice for the role when Guardiola uses a defensive trio.

Given the dearth of quality in England’s midfield it makes complete sense for the central defender to step out into midfield. This allows the midfield players to perform a more workmanlike job in the channels and the wing-backs to push on even further.

Though it was something of an experimental team selection in Lithuania, the wing-backs were given complete freedom to attack thanks to Stones holding fort and the defensive base provided by the two wide defenders in the three.

The average positions show right wing-back Kieran Trippier (2) as one of the team’s most advanced players, and the formation is similar one which City have used this season.

The images below show England’s last game against Lithuania, and City’s opening game of the season against Brighton. Stones (5 and 6) is the middle centre back in both, and for England he becomes the defensive midfielder too, as Southgate’s side don’t have a specialist in the position. 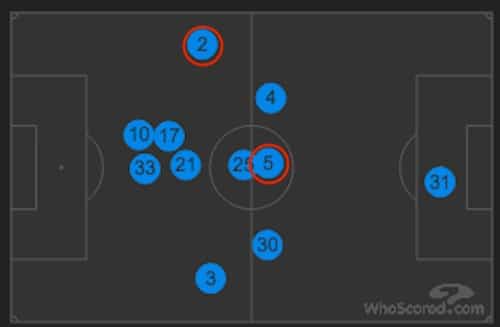 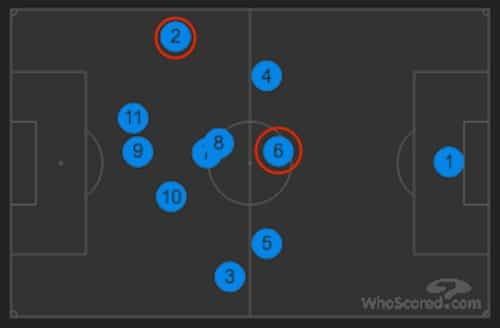 As England get used to this formation Stones may even end up stationed where Fernandinho (25) is in the top image, but if he's asked to do regular defensive work as the sweeper, this will always drag his average position back to the other side of the halfway line.

City have an exciting talent on their hands who could be the latest player to benefit from Guardiola's tutelage at club and international level. The manager has transformed the positioning, mindset and ultimately shaped the career of many a player during his time at Barcelona and Bayern Munich, and Stones appears to be his latest project.

It's been a while since there has been a genuine libero at the top level in world football, and though Guardiola's sides have flirted with them in the past, his latest football experiment in England could give their national team every reason to use one. That's if they've got the Stones.