Manchester United‘s transfer policy appears to be moving in a notably different direction this summer, with a newfound focus on up-and-coming prospects as opposed to targeting established stars.

Two prodigious youngsters have already walked through the doors at Old Trafford, with 21-year-old speed merchant Daniel James joining from Swansea City for a reported £15million and England Under-21 right-back Aaron Wan-Bissaka signing from Crystal Palace for a fee in excess of £45million.

But the Red Devils are still being linked with a host of players as Ole Gunnar Solskjær continues to rebuild a United squad that is in drastic need of fresh faces after a disappointing sixth-place finish in the Premier League last season.

And one story that has undoubtedly caught the eye is that the Red Devils are weighing up an eye-watering £50million for Aston Villa midfielder John McGinn, the Scottish international who enjoyed an impressive 2018/19 campaign with the Midlands side.

The 24-year-old is a key component in the Villans’ midfield, but is he ready to wear the Manchester United shirt and would he warrant such a huge outlay of funds? 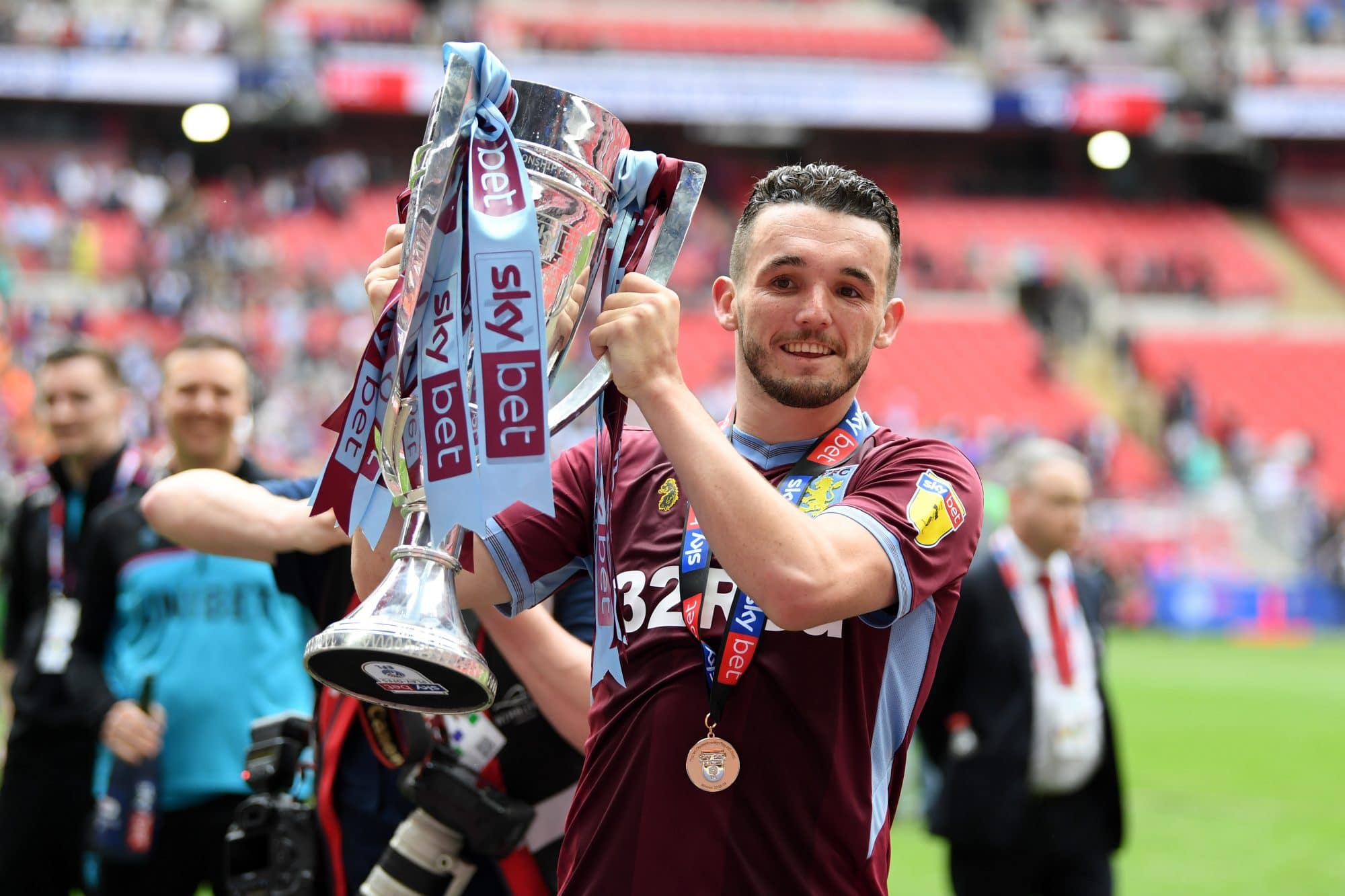 McGinn’s rise to prominence has slowly gathered pace since he made his Scottish Premiership debut for St Mirren in the 2012/13 season. He racked up 98 appearances in all competitions prior to the club’s relegation from the top flight, during which time he was part of one of the greatest moments in the Buddies’ history; beating Hearts 3-2 in the Scottish League Cup final in 2013.

A somewhat sidewards move to Scottish Championship club Hibernian followed in 2015, but it was at Easter Road that McGinn began attracting admirers after an outstanding three seasons.

He was part of the side that won Hibernian’s first Scottish Cup since 1902, before securing promotion back to the top flight the following season and starring for the Hibees in 2017/18.

It soon became clear McGinn wouldn’t be playing for a mid-table Scottish Premiership side for very long, as champions Celtic and English Championship heavyweights Aston Villa showed interest in the midfield maestro.

What the stats say 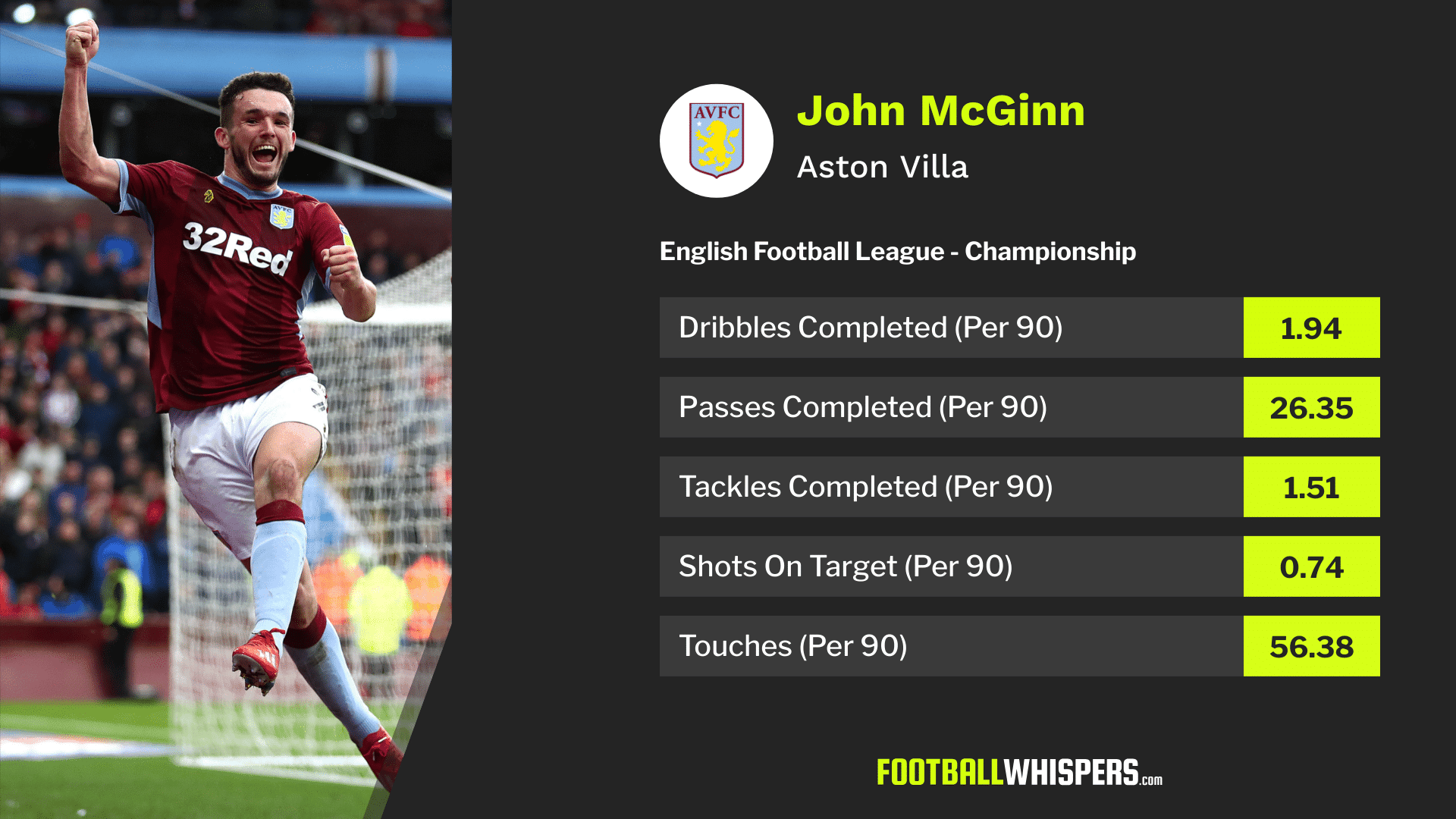 We can get a clearer idea of the type of player McGinn is from his statistics while playing for Aston Villa in the Championship; he is a midfielder who wants to get forward and contribute in the final third.

At first glance, a season total of seven league goals is a pretty healthy return, but this needs to be weighed up against the fact McGinn attempted an average of 2.55 shots per 90 – the 15th highest number of attempts by any midfielder in the Championship.

Only 31 of those efforts were on target, meaning McGinn had the ninth-highest number of shots off target per 90 among midfielders in the second tier (1.09).

Those numbers don't reflect well on McGinn in terms of his potency in front of goal, and Manchester United fans will perhaps only be slightly more impressed by the midfielder’s defensive stats.

He completed 1.5 tackles per 90, which puts him in the top 40 for that metric among Championship midfielders. That's after attempting 2.15 tackles per 90, with a success rate of just under 70 per cent suggesting that while McGinn is a competent ball winner he is certainly not one of the division's best.

Red Devils’ fans looking enviously at Manchester City and Liverpool’s successful high pressing game may at least be buoyed by McGinn’s ability to win the ball high up the pitch.

He regained possession in the final third an average of 0.64 times per 90 in the 2018/19 campaign, which puts him in the Championship's top 30 midfielders. McGinn also ranks highly in terms of dispossessing the opposition across the whole pitch, with an average of 2.22 dispossessions a game representing the 14th best return of any midfield player.

Further encouragement can be found when Solskjaer’s latest target has the ball at his feet – completing an average of 1.6 dribbles per 90, which places him inside the division’s top ten.

However, his passing accuracy still leaves something to be desired, with McGinn’s pass completion numbers only just falling into the top 100 Championship midfielders from last season.

There’s little doubt McGinn’s career is on an upward trajectory and it’s hard to argue with his achievements to date. He’s yet to be fazed by any challenge, despite a relatively rapid rise from the Scottish Championship to the Premier League and has picked up two promotions and two major trophies in just seven full seasons.

McGinn is held in particularly high esteem by the supporters, players and management at Aston Villa so certainly passes the eye test, but the statistics indicate he's not yet ready for a huge step up. It’s also worth noting, too, that those numbers compare him to other players in the second tier – a significant step downwards from the Premier League.

Aston Villa’s star midfielder could ultimately end up being a top player at the highest level, but he would represent a risk for Manchester United at a time when they’ll need big-money additions to hit the ground running.

Wan-Bissaka has a year of top-flight football under his belt while James has been acquired for what equates to little more than pocket change in today's transfer market; there will not be great expectation placed upon him.

McGinn would be expensive and unproven. If an asking price of £50 million is to be believed then signing him would be a major gamble, and one that United would be best avoiding.