As Celtic romped to a domestic treble of Scottish Premiership, Scottish Cup and Scottish League Cup last season, midfield was perhaps their most important and effective area.

The tenacity, aggression and commitment of club captain Scott Brown, the touch and creativity of Stuart Armstrong, and the drive and skill of Callum McGregor were all pivotal elements in the Scottish giants’ successes.

However, as Celtic look to build a squad capable of maintaining their grip on the domestic scene while also progressing in Europe, additions could be made to this area. And one of the more recent rumours involves John McGinn.

The Hibernian midfielder enjoyed an excellent 2016/17 campaign of his own, helping his club back into the top flight. But, at 22 years of age, he could well be ready for a step up.

Here, Football Whispers assesses if McGinn would be an improvement on Celtic’s existing midfield options. 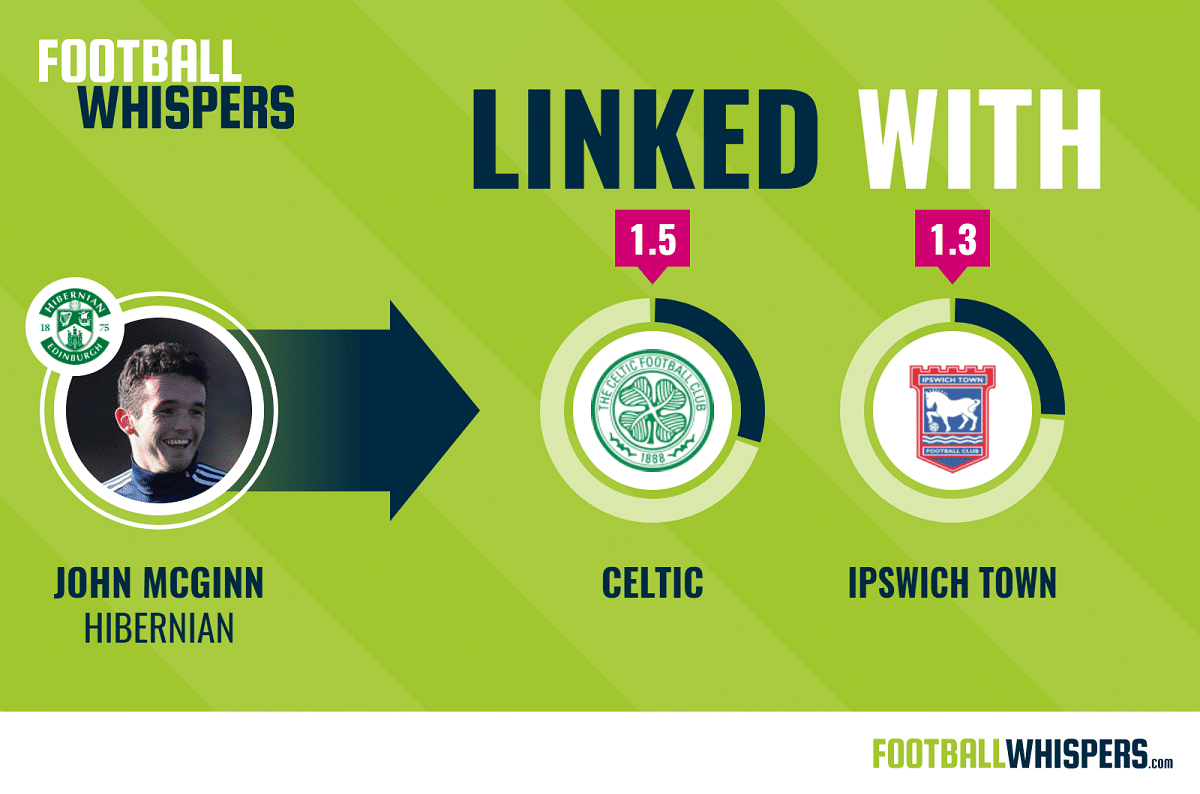 Having broken through at St. Mirren, McGinn joined Hibs in 2015. He was brought in to help guide the club back into the Scottish Premiership, but he would end up achieving much more than that during an eventful first two seasons at Easter Road.

His maiden campaign saw a 114-year hoodoo come to an end, as the Edinburgh side lifted the Scottish Cup. The 22-year-old central midfielder was instrumental to the achievement, appearing in every single one of the team’s seven fixtures in the competition.

Last season, McGinn aided Hibs to promotion via a comfortable first-place finish in the Scottish Championship, fulfilling a key objective.

Over the course of the past two years, the youngster has established himself as a regular call-up to Gordon Strachan’s Scotland national team, despite playing outside of the top tier. He was awarded the man of the match for his display on his debut against Denmark in 2016, and has since made two further appearances for his country.

Speaking of his development as a player during his time at Hibs, McGinn stated that: “I’m absolutely a better player now than I was when I last played in the Premiership. I was very raw – and slightly chubbier – when I was there with St Mirren and I’m looking forward to hopefully proving that I’ve come on a long way in the weeks and months ahead.

“I do like to think I’m the same in some regards. I like to think I still play without fear. When I broke into the St Mirren team thing went pretty well for me and I managed to hit the ground running.

“There are always challenges that come your way and I’m probably better prepared to deal with them now I’ve been at Hibs. I’m a little older, a little wiser and we’ve had a few setbacks so that all adds to your experience.”

Evidently, McGinn feels ready to play in the Scottish Premiership. And the fact he has been used at senior international level in recent years backs up this belief – he is simply too good to continue operating anything below his country’s highest division.

However, the player has also suggested that he sees his future being at Hibs, and he is clearly excited about the idea of taking the club back into the top flight, saying: “We need to get the club back to where it belongs in the top half of Scottish football. The manager said we’re the second best team in Scotland and it’s nice he thinks that of us.

“Hibs will be an attractive proposition for a lot of players so hopefully we can use that to improve us. We want to keep the nucleus of the squad and add quality.”

WHAT WOULD MCGINN BRING TO CELTIC?

McGinn may be concentrating on Hibernian for the time being, but at some stage a move away will become almost inevitable. The only real uncertainty regards when, not if, that move will transpire.

If recent reports are to be believed, the move could come about sooner than initially expected. English Championship side Ipswich Town are said to have had a bid of £1.2million for the player rejected, though they will come back with an improved offer.

Meanwhile, those in charge of first-team affairs at Celtic have made no secret of their appreciation for McGinn’s qualities, something that hints they may be prepared to rival the Tractor Boys for the player’s signature.

The Scottish champions’ assistant manager Chris Davies told Herald Scotland that: “He's a player I admire. Yes, I think he's a good player, but it's not fair for us to start speculating on bringing this player or that when they belong to other clubs.

“He had a really good season last year and I'm aware of him being a really good player. That's as far as that one goes. We know what we want and we're working towards that.”

While Davies’ words didn’t fuel the reports, they did confirm that Celtic are aware of McGinn and what he brings to the table. Indeed, the manager, Brendan Rodgers, has openly stated his admiration for the Hibs youngster.

The former Liverpool boss, having watched the player, said: “He is very industrious and looks a great lad. He knows the game, you can see that with the way he fills in positions.

“Defensively he’s strong, he puts his foot in and can make a tackle. He doesn’t oversell himself, he’s technically very good when he tackles. Tactically he looks like he’s got a good understanding of the game.

“He passes it well and had a couple of good moments in the game when he moved into the box. He was a real driving force for them.” 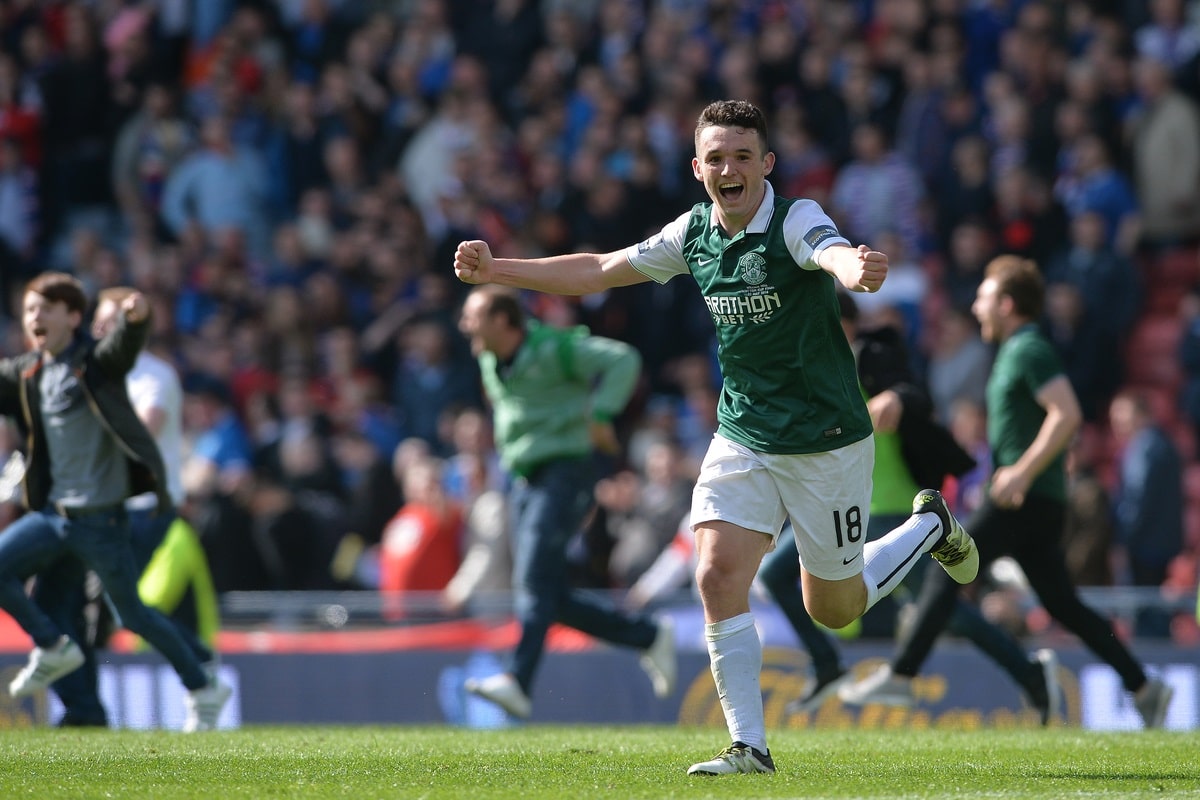 A dynamic and wholehearted operator, McGinn is more of a shuttler or ball-winner than the likes of Armstrong or McGregor. Were Celtic to sign him, he would likely be tasked with helping to press and defend from the front, leaving creative responsibilities – for the most part – to the aforementioned duo.

The 22-year-old’s defensive ability and indefatigable running make him an effective player without the ball, and he could well be seen as the long-term successor to Brown, who is now 32 years of age – in Rodgers’ midfield.

McGinn may not be an immediate improvement on Celtic’s current midfield options. He isn’t quite as technically gifted or incisive as Armstrong or McGregor, and he lacks the experience and strength of Brown. But, with time on his side, he would be an excellent strategic addition to the squad.