At the time, the Aston Villa midfielder had one season of football under his belt in the Championship having moved from Hibernian in the summer of 2018. Courted by Celtic, McGinn eventually moved to Villa Park after the Bhoys reportedly refused to up their £2million bid. The Villans swooped in with a £5million offer and tied up the deal.

On paper, it was a gamble. A significant outlay for a player with no experience outside of Scotland and only 15 goals across five seasons in the Scottish top-flight. If he failed to deliver then Villa would’ve struggled to recoup their money.

But fast forward to the end of the 2018/19 season and it was McGinn’s goal which fired Dean Smith’s men into the Premier League. Villa edged the Championship final against Derby County with their No.7 scoring what turned out to be the match-winning strike.

The goal at Wembley was his seventh of the season, making it his most prolific to date. Still, there was nothing there to suggest he was a £50million player.

But people are no longer laughing.

McGinn netted a hat-trick for Scotland in the 6-0 win over San Marino to take his tally for the season to seven in all competitions. The 24-year-old has three goals for Villa in the Premier League and has arguably been their best and most consistent player.

We may only be eight games into the new campaign and it’s premature to start making bold statements, but McGinn looks right at home. Furthermore, he’s not just doing a job for Villa, he looks to have all the tools and traits required to be a standout Premier League midfielder. 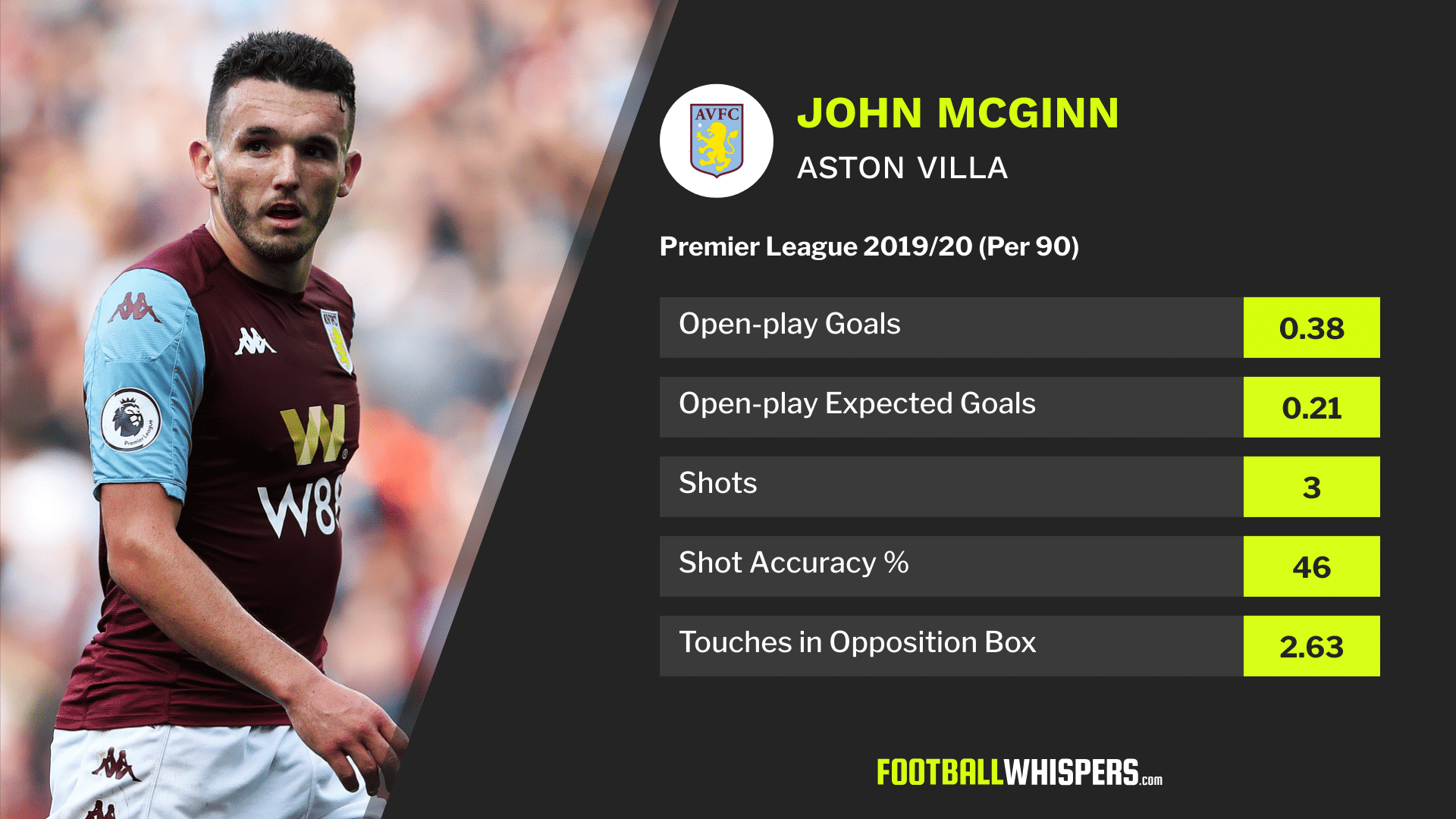 The 24-year-old has more goals than Kevin De Bruyne, James Maddison and Paul Pogba this season. He’s exceeding his expected goals per 90 return of 0.21 but even without the overperformance, his average is still impressive for a midfielder turning out for a struggling Aston Villa side.

Remarkably, he’s taking three shots per 90 and landing 46 per cent of them on target. For context, back-to-back Golden Ball winner Mohamed Salah is only averaging 0.31 more shots than McGinn this season.

The Scotland international is doing an outstanding job to fashion out shooting opportunities with such regularity, especially given he’s starting in the middle third of the pitch. Combine that with the fact he’s averaging fewer than three touches in the penalty area per 90 and Villa have a genuine threat on their hands. 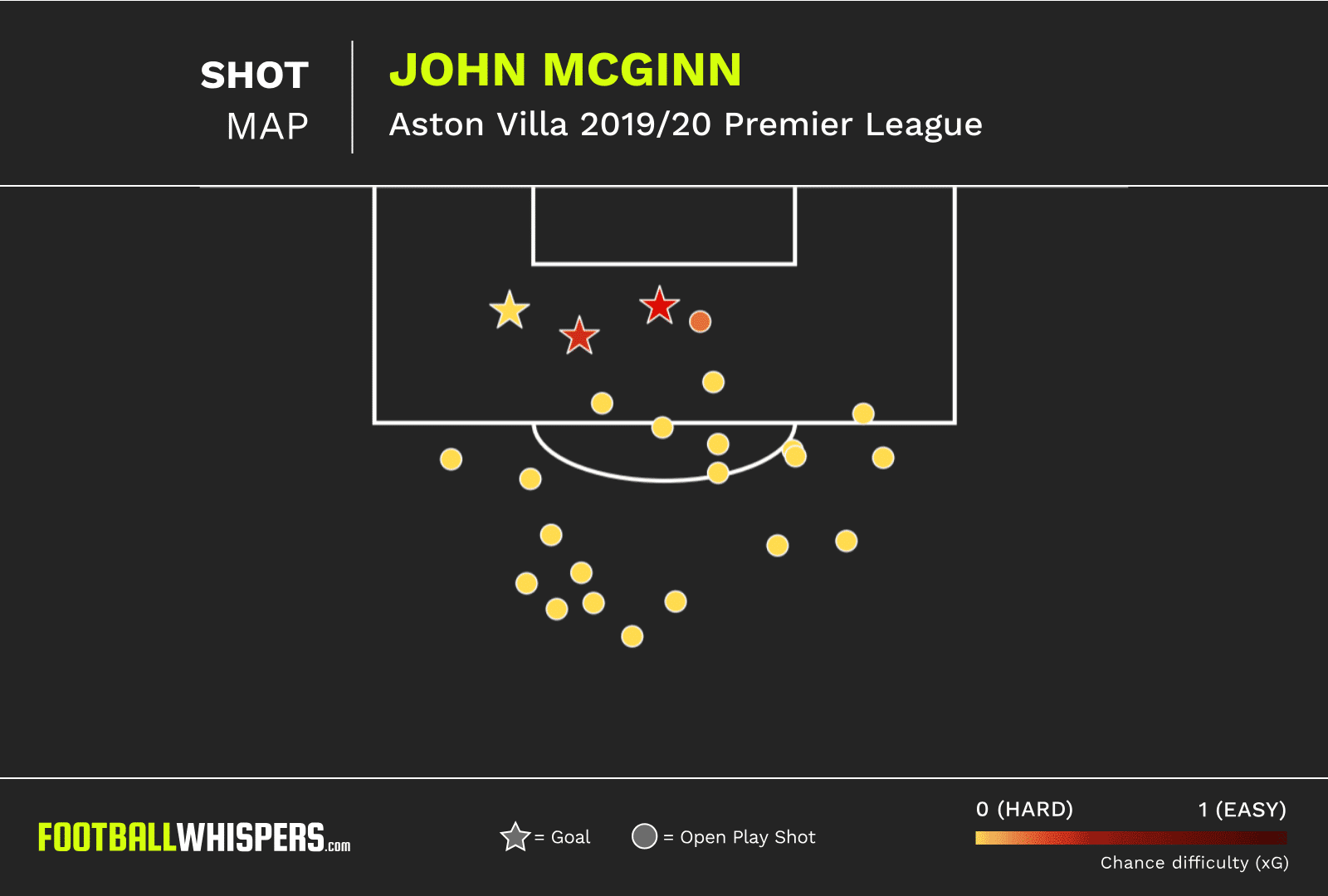 McGinn is taking a large number of his efforts from distance and he’s yet to score one from outside the 18-yard box. When he gets into the area, he’s prolific. Playing for a more dominant team could see the former St Mirren man develop into the Premier League’s next great goalscoring midfielder.

The left-footed maestro has already netted away at Spurs and Arsenal and bagged against a usually resilient Burnley side at Villa Park. At the end of the day, a goal is a goal no matter who it comes against, but the quality of opposition McGinn finds himself scoring against shows he can cut it against some of the best teams the Premier League has to offer.

If McGinn’s averages remain the same for the entire season then his expected goals total would be close to around the eight mark. It might not seem overly impressive but posting those open-play averages as a middle third player would make the Scotland international one of the best in the English top-flight.

That sort of average betters what Pogba and Maddison managed during the 2018/19 campaign. And those two midfielders are regularly being linked with £80million plus moves elsewhere. The £50million being mooted for the 24-year-old could actually be a bargain if he proves this run of form isn’t just a hot streak.