Johan Cruyff wasn’t just the most elegant and graceful footballer ever to play the game, he was also the brains behind a playing style that many sides have tried to emulate, but few have succeeded.

Cruyff was the godfather when it came to ability, pace, balance, dribbling and vision; the way he saw the game meant that if a defender wanted to go on a foraging run up-field, a midfielder would simply fill in for him at the back and stay there. It was a way of playing the game that made every team he was involved in a joy to watch.

He brought individual brilliance, intelligence, strategy and, more importantly, enjoyment to the game. Forget Lionel Messi, Andrés Iniesta and tiki-taka, his way of playing the game, both as a player and as a coach, was catalytic, inspirational and oozed renaissance and for that reason Johan Cruyff has made Football Whispers Top 10 Number 10s – the full list can be found here.

Cruyff had joined Ajax at the age of 10 but had to wait until he was 17 before he made his debut for the club in November 1964. It wasn’t until the following season though that he really made a name for himself and becoming the first name on the team sheet every game thanks to his prolific goal scoring form. In seven games he scored eight times throughout that winter, including a hat-trick in a demolition of Telstar which ended up 6-2 and then scoring four against FC Veendam a week later. As the season came to an end his tally was 25 goals in 23 games and went some way to helping Ajax win the league championship.

Ajax defended their title the following season and also lifted the Dutch cup which completed Cruyff’s first ever double. He ended the season as the top marksman in the Eredivisie with 33 goals. Cruyff’s success at Ajax continued as they won the league for the third time in a row the following season while he was named footballer of the year in Holland once again.

The 1969-70 season brought another league and cup double for Cruff as well as being named Dutch footballer of the year yet again for the third successive year. But by the beginning of the following season he had suffered a serious groin injury and by the time he returned against PSV in October 1970 he wasn't wearing his traditional number nine shirt. Instead he was wearing the 14 jersey a switch he ultimately made a permanent change for Ajax and his country.

The talk was that Cruyff was set to leave Ajax in 1970 but the Dutchman signalled his intent by signing a new seven year contract with Ajax – by the end of the season, he had again been voted Dutch footballer of the year as well as winning the Ballon D’or.

In 1972 Cruyff was instrumental as Ajax won their second consecutive European Cup by beating Inter Milan 2-0 in the final with the Dutchman getting a brace. He ended the season as the top scorer in the league with 25 goals, taking Ajax to yet another league and cup double. Ajax also won the Intercontinental Cup beating Independiente from Argentina, not to mention a win over Rangers in January 1973 to claim the European Super Cup. 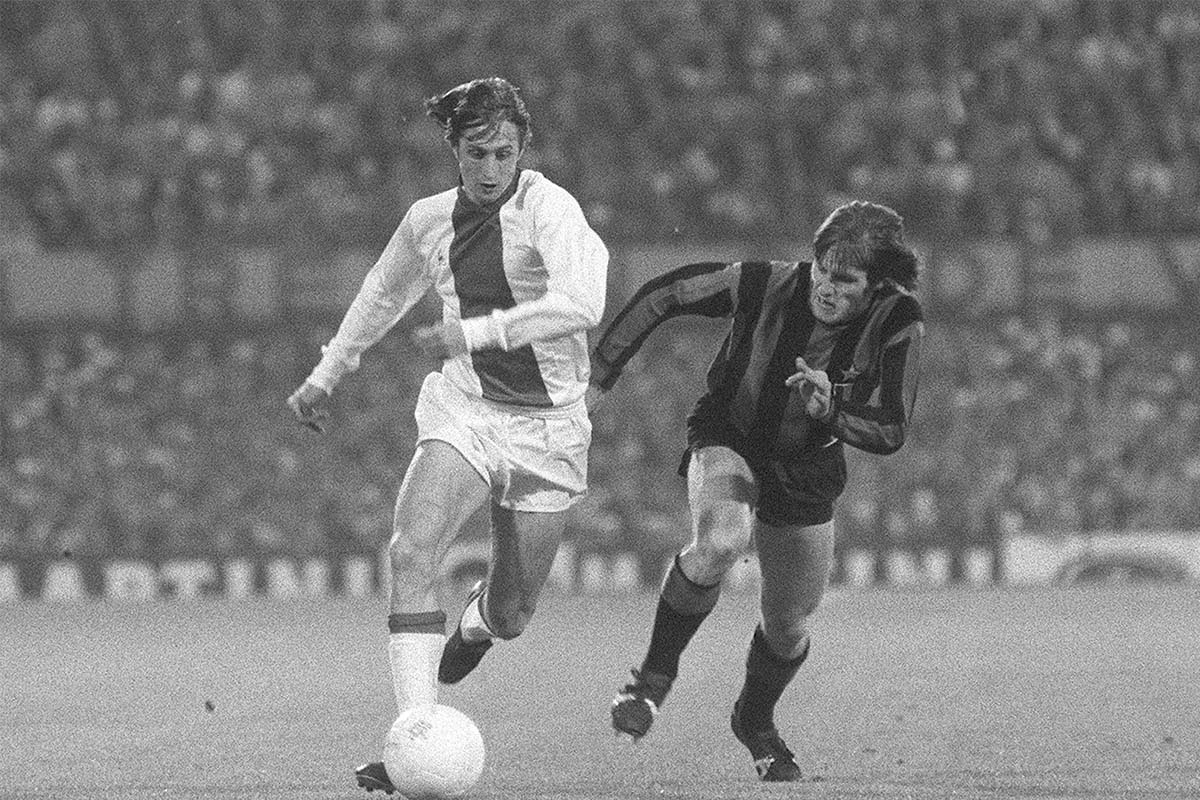 The 1972-73 would also be remembered for Ajax winning a third successive European Cup after they beat Juventus 1-0 the first time any side had achieved that feat since the great Real Madrid side of the 1950s.

Cruyff did eventually leave his beloved Ajax for Barcelona in 1973 after something of a soap opera. The club had tried to sign him for the past three years without success but it was Vic Buckingham, the man who had first discovered the Dutchman for Ajax, who warned the Catalan side that he had to be signed at any cost for fear of missing out, and they didn’t need telling twice.

Barça had to pay 120 million pesetas (around £13 million) in order to lure the Dutchman away from Ajax, a record at the time, but due to contractual complications it wouldn’t be until the eighth match of the season that the fans would finally get to see the player they believed would transform their fortunes.

Barcelona had made something of a poor start to the season, with two wins, two draws and three defeats, leaving them 14th in the table. Cruyff made his debut against Grenada, who were no mugs at the time, and after a dull first, the Dutchman scored two second half goals to cement his place in Barcelona folklore.

He soon became the idol that Barcelona had been looking for, a representative of modern European football, and with Cruyff came the expectation of ending the wait to win a league title once again; with the last success being back some fourteen years. The media hype was such that Cruyff would even be the subject of an autobiographical film about his life released just weeks after his arrival.

If Cruyff hadn’t already won over the Barca fans after announcing that he chose to sign for them instead of Real Madrid, he also opted for the name Jordi for his newly born son – a traditional Catalan name. In his time at the Nou Camp he was instrumental in the side winning La Liga, the first time the club had done so since 1960 as well being named European Footballer of the Year. But in truth his success was modest compared to his Ajax career with just the one Spanish championship and one Spanish Cup to his name after 174 games and 64 goals.

Like so many great players of the time Cruyff’s future would lie in America as the North American Soccer League continued to pilfer some of the greatest names in their efforts to promote soccer in the States. He signed a lucrative deal with the Los Angeles Aztecs and was voted NASL Player of the Year in his first season. But in truth Cruyff struggled to fit in to the American way, as the standard was somewhat below him, and after a failed season at the Washington Diplomats he returned to Europe.

After Leicester City had almost broken the bank to bring Cruyff to England a deal could not be agreed upon and he signed for Spanish second division side Levante instead. But injuries and disagreements with the club blighted his time in Spain, meaning he only made 10 appearances and scored two goals. After they failed to secure promotion to the first division Levante failed when it came to the financial agreements that were specified in Cruyff’s contract. So after his short-lived period in Spain, Cruyff returned to Ajax in 1980 as a ‘technical advisor’ for Coach Leo Beenhakker.

Cruyff certainly carried on where he had left off as he was part of a managerial team that would go on to win the league and cup double in 1982, he even signed a new contract as a player for the club and scored on his return against Haarlem. But the relationship was to end on a sour note. Come the end of the season, Ajax would not offer him a another deal with a furious Cruyff instead signing for Ajax’s arch-rivals Feyenoord. Cruyff’s revenge was sweet as Feyenoord won the Eredivisie for the first time in a decade as part of a league and cup double. 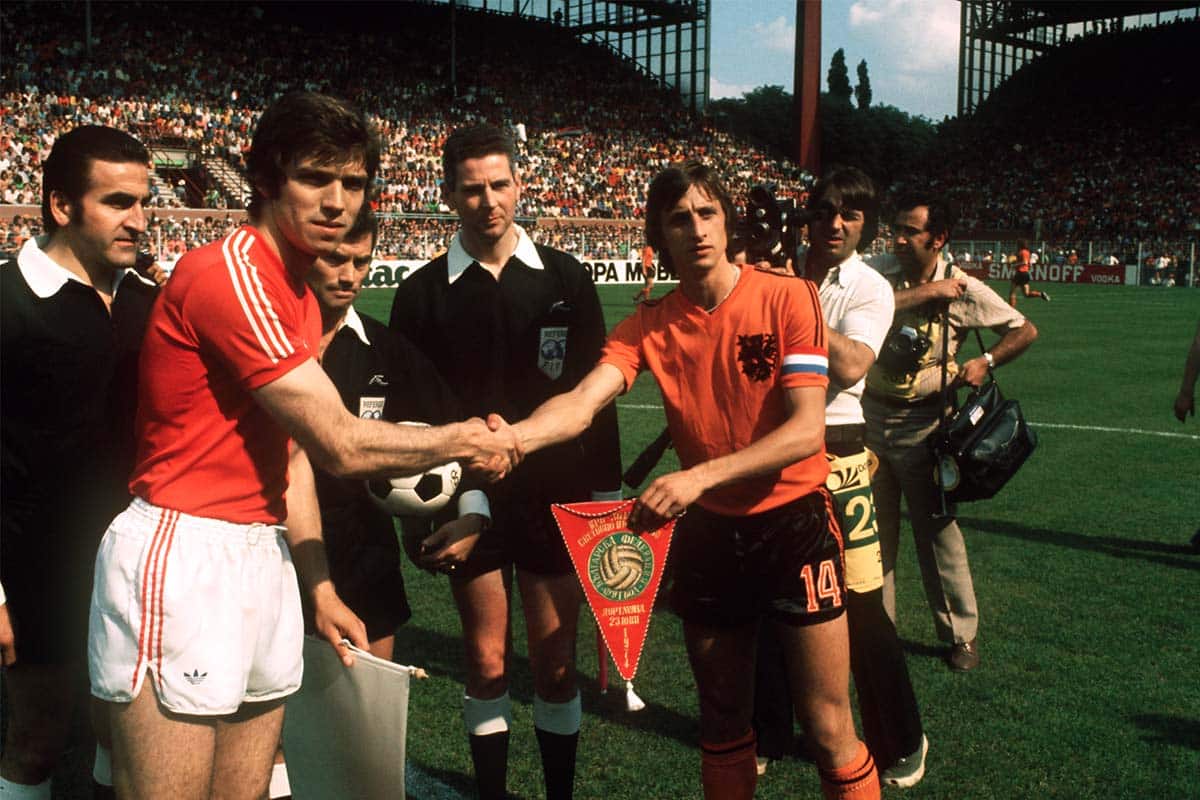 For Holland Cruyff was as much a maverick as he’d been for the clubs he represented. In 48 matches for his country he scored 33 goals and the team were never defeated in a game which he scored. He also had the “honour” of becoming the first Dutch player to be sent off in his second ever game for the Netherlands. Team sponsor Adidas even manufactured a unique jersey for him as he refused to wear the famous three stripes due to a lucrative contract with Puma – he wore the kit with only two stripes.

But for a player who had won so much in the game, Cruyff’s international career was something of a disappointment. The Netherlands were runners-up in the 1974 World Cup but being named Player of the Tournament was something of a consolation. They comfortably eased their way to the final having beaten Argentina, East Germany and Brazil. Cruyff even scored two against Argentina and one against Brazil to put out the defending champions, but they would fall agonisingly short in the final, losing 2-1 to West Germany.

To fully appreciate Cruyff’s playing career a quick look at what he won will illustrate to anyone who never had the pleasure of seeing him play just what an incredible talent he was: Nine Dutch league titles, six Dutch Cups, one Intercontinental Cup, two UEFA Super Cups, one UEFA Intertoto Cup, one La Liga title, one Copa del Rey and of course three European Cups.

Once his playing days had come to an end Cruyff excelled in the dugout with the same panache that he had on the pitch, becoming one of the most renowned coaches of his generation. Returning to his beloved Ajax as manager, Cruyff led the side to Dutch Cup success in 1985/86 and 1986/87, along with the Cup Winners’ Cup; but it was with Barcelona that Cruyff reached his pinnacle. He masterminded the Catalans’ four consecutive La Liga titles between 1990 and 1994, while he would also win the European Cup against Sampdoria at Wembley in 1992.

Yes, there have been players who have won more in the game and managers who have achieved greater honours, but when it comes to his elegance as a footballer and the style of play he encouraged as a coach, Johan Cruyff is up there with the very best, and at a time when football was far from “beautiful” due to the violence, racism and tragedies that had all-too-often overshadowed the sport. For that very reason we should all be grateful.