In modern football, the act of renewing, or not renewing a contract isn’t too rare. The player is king, and the club struggles to keep up with either wage demands or trophy demands and that usually ends in the footballer moving on to pastures new. This isn’t uncommon. But in the years before the Champions League and the Premier League, clubs had more power to keep players they wanted. The money wasn’t with the players. The power more even. Clubs could choose to discard a player at the drop of a hat. Power allows that. And evidence of this is with the story of Johan Cruyff’s second coming at Ajax.

Johan Cruyff is one of the legends of the game. Known for both managerial and playing genius, the man’s talent knew no boundaries. He left a legacy at not one but two clubs – Ajax and Barcelona – and allowed both to become the worldwide names they’re known as being today. As many ‘legends’ as there may be, this man sits alongside Pele, Maradona and Messi as a player at the literal peak of football.

Cruyff is best known for his part in the transformation of Dutch football from something of a shambles to the professional, almost origin-story like mythology around the great orange country. Around the time of his emergence, Dutch football wasn’t on the map. Not like today, not like anything. A player of Cruyff’s ability changes the mentality of a nation. He exploded onto the scene and there hasn’t been so much as a glance backwards.

After leaving Ajax and 8 back-to-back league titles, Cruyff lit up Spain and the Nou Camp of Barcelona. His ability at Ajax had never been in doubt, but as a springboard to legendary status, Barcelona was another level all together.

Picking up a first Barcelona league title since 1960, Cruyff had become a darling of Catalan. There was little he could do to taint his growing, and glowing reputation as one of the world’s greatest footballers.

The philosophy and footprint of the great man himself has been left on both Ajax and Barcelona, but it is one move, a move that was both aggressive and defensive, a protection of his self and his pride that really caused shock up and down the footballing world. This move was to Ajax’s biggest rivals Feyenoord.

During the end of his career, Johan Cruyff had moved around a bit. From moving to Barcelona from Ajax, the player played for a host of clubs, namely LA Aztecs and Levante, with discussions being held with numerous clubs including Leicester City. After his journeyman years, Cruyff returned home. Ajax, seeing the possibility of a romantic final dance offered the Dutchman a contract. However, upon the expiration of said contract the club had no plans to further his stay in Amsterdam. This angered Cruyff.

A man not to be crossed, the player knew exactly how to hit back. His talent, experience and knowledge of the game allowed him to choose from more than a few clubs, arguably having most clubs in world football at his picking. But the club he chose wasn’t too far away. It was, however, quite far at the back of the minds of the Ajax fans who had come to call him their hero. Cruyff joined Feyenoord. 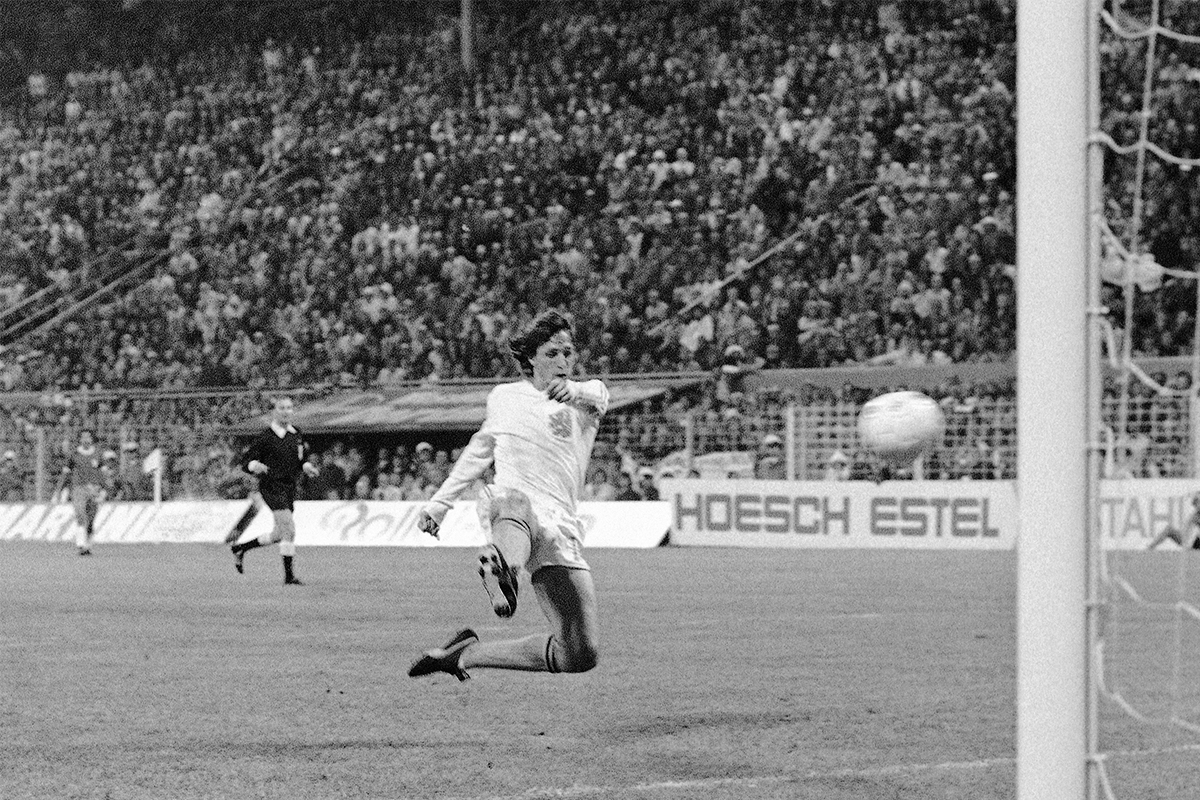 Ajax and Feyenoord are bitter, twisted and fierce rivals. Like crossing the divide of Manchester and Liverpool or Real and Barca, the two clubs above really, really don’t like each other. The bubbling of distain existed before Johan Cruyff made the switch, but it certainly hit fever pitch once he did.

Feyenoord fans weren’t too happy to start with. An icy reception granted to him at first, this probably wasn’t helped by the fact that during their first game against Ajax that season, Cruyff and Co ended up on the losing side in emphatic fashion.

8-2 the game ended, with errors and class being the downfall of a previously promising outfit in Feyenoord. In earlier games in the league, Cruyff’s new club had won five out of six and were scoring goals for fun, literally. On one autumn afternoon, though, reality set in.

The world of a footballing man is often full of important moments. Turning points jump out from the history books like coiled up springs being let loose. This is one of them moments.

8-2 to your closest rivals could send a club one of two ways. Spiralling out of control, allowing a game of such embarrassment to become a conductor for a meltdown. It can also be a kick up the collective backside. A chance to take a clean slate and find a new rhythm. This match produced the latter.

Throughout the season Feyenoord were excellent. Storming to the top of the league, the transformation was complete with a 4-1 win against Ajax, a league title and a cup in the process. The revenge and confirmation of superiority from Johan Cruyff has come full circle. The point proven, a title won.

When Ajax let Johan Cruyff go after a double winning season, little did they predict what would happen next. Their former messiah and golden boy of a generation proving their disloyalty to be short-sighted. The following season, other than winning the double once more, Cruyff won player of the year once more. A final hurrah and two finger lifted towards the city of Amsterdam. All is well that ends OK. Cruyff would end his playing career that season. And the legend of his managerial career would begin. The rift with Ajax would be put to bed in the same was it began. In an emphatic way. But for one year and one year only, the Angel of Amsterdam was the Devil in disguise.