For half an hour it felt like the goals wouldn’t stop flowing. Germany were finding the holes in Brazil’s defence with a precision so ruthless it bordered on the inhumane. Brazil were emotionally vulnerable, without their star man, Neymar, and on their way out of the 2014 World Cup on their own soil in humiliating fashion.

That semi-final clash ended with a ridiculous scoreline: Brazil 1-7 Germany. Afterwards, BBC pundits Gary Lineker and Alan Hansen could scarcely hide their disbelief. This was as low as it could possibly get for a country obsessed with football; change was desperately needed.

Tite would provide that change, though he would not do so immediately, because he was not allowed to. Brazil replaced Luiz Felipe Scolari, the manager who presided over their World Cup nightmare, with Dunga, who had led the team previously between 2010 and 2014. What followed was more of the same: dull and ineffective tactics.

An early exit at the 2016 Copa America prompted Dunga’s exit, however. In came Tite, and the revolution got underway. Brazil won their first nine games under the 57-year-old, starting with a 3-0 victory away to Ecuador in World Cup qualifying. In that run, they kept seven clean sheets. Finally, after years of underperformance, a functional team was being assembled.

Tite was widely considered the man for the job in 2014. He had already built an outstanding resume in his home country, leading Corinthians to success domestically, continentally and intercontinentally. Afterwards, he had spent time studying the game, continuing his commitment to learning with visits to Arsenal and Real Madrid.

When the Brazil job didn’t come, he went back to Corinthians and won another title. Within two years, he was tasked with rejuvenating the national team after a difficult start to 2018 World Cup qualification. Immediately he turned around the Seleção's form, leading them comfortably to the top of the South American qualifying section, ten points clear of second-placed Uruguay.

There have since been some intriguing friendly displays, only bolstering the notion that Brazil now belong firmly among the favourites thanks to the tactical rejuvenation implemented by their manager. 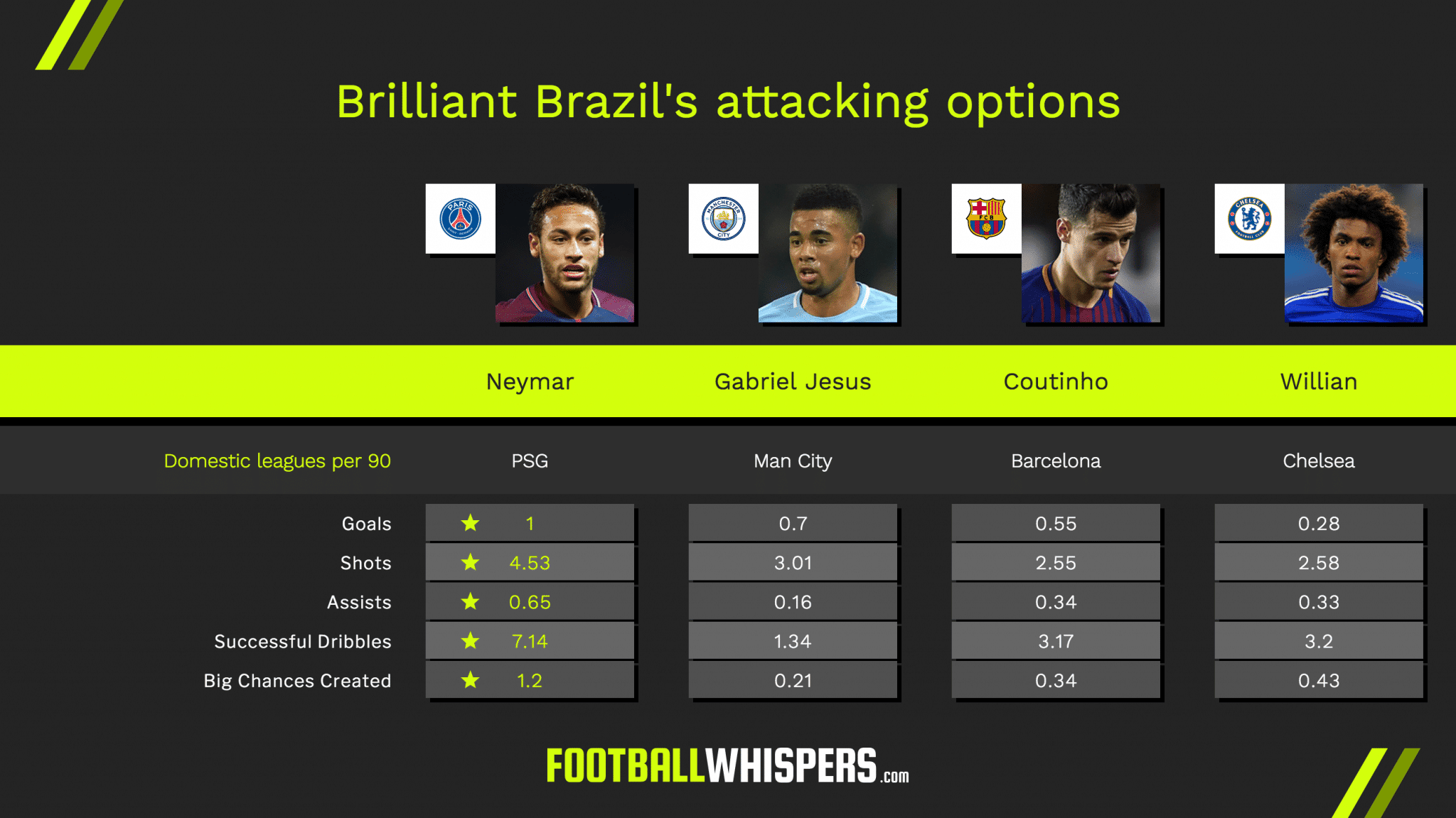 They drew 0-0 away to England last November in a game they dominated for the most part, while this year they thrashed Austria and World Cup hosts Russia, as well as defeating reigning champions and 2014 conquerors Germany 1-0 away, and without Neymar.

The improvement has been underpinned by a solid defensive record. Since taking charge, Tite has seen his side win 17 of 21 games. Along the way they have conceded just five goals – that’s 0.2 goals against per game – and kept a phenomenal 16 clean sheets.

The concept of Joga Bonito may be long gone as far as the Brazil national team is concerned, but this is the finest defensive unit they have fielded in decades.

In an interview with World Soccer leading up to this summer’s finals, Tite emphasised the importance he places on defensive fortitude and hard work without the ball. “The team as a whole is a co-operation with the roles of other players,” he said. “One runs for the other.”

Considering the change he has brought about, it’s no surprise that Casemiro has been one of his major ‘finds’. The Real Madrid midfield shield was far from a regular before Tite’s arrival; now he is integral to the team’s 4-3-3 system, sitting at the base of a three that tends to include Barcelona star Paulinho and Manchester City holder Fernandinho.

Other, more attack-minded players have also become crucial to the manager, however. Philippe Coutinho has been used in central midfield and on the right wing, where he rotates with Chelsea’s Willian. And, up front, Gabriel Jesus was given his debut by Tite, since hitting the net ten times in 17 international outings.

An injury to usual right-back Dani Alves aside, this Brazil team are settled entering this summer’s tournament in Russia. Liverpool transfer target Alisson will get the nod over City’s Ederson as No.1, while Thiago Silva and Miranda form a solid centre-back pairing. Danilo and Marcelo will be the full-backs, with Neymar on the left wing and Willian or Coutinho on the right.

The only question mark regards the centre of midfield. Tite’s preference has been for a three featuring Paulinho, Casemiro and Fernandinho, though the latter could make way for Coutinho, at least in games where they are likely to have the majority of possession.

Croatia showed in a recent friendly that Brazil can be stifled, so a need for more dynamism and creativity could see the former Liverpool playmaker start on the left of the midfield trident.

Brazil are no longer reliant on Neymar, and the quality of their attacking personnel guarantees goals. That, along with a more resolute defensive approach, means Tite has all the tools to lead his side to victory this summer.

He may not be able to radically alter the style of the Seleção, but he could well vanquish the memories of 7-1.