When you watch Virgil van Dijk play, it’s easy to understand why so many of the plaudits go his way. He is, in every sense, a defensive behemoth, and he’s now the yardstick for all centre-backs.

Peerless at what he does, he’s been credited with improving Dejan Lovren’s consistency and he’s partly responsible for Joël Matip taking his game up another level. People now just expect his defensive partners to improve but when it comes to Joe Gomez, it’s a little different.

The former Charlton Athletic youngster doesn’t simply piggyback the performances of the Liverpool No.4, he competes with the Netherlands captain. That's not to say Lovren and Matip don't do the same but when either of those partner Van Dijk it is clear who the alpha is.

When Gomez is there, responsibilities are shared.

It's why the Reds look at their meanest when the two are paired together. After two games without a clean sheet, the Premier League leaders recorded another shut-out in the midweek win over West Ham United. It was their seventh in eight Premier League matches.

The run started when Gomez returned to the starting XI alongside Van Dijk midway through December. Before that, Liverpool hadn't kept a clean sheet in 11 games. Their worst run since 1998.

Since then, only two teams have scored against the European champions in the 11 matches the 22-year-old has appeared in. Wolverhampton Wanderers did so in the Premier League recently and Monterrey struck in the semi-final of the Club World Cup.

Liverpool have been almost impenetrable recently. 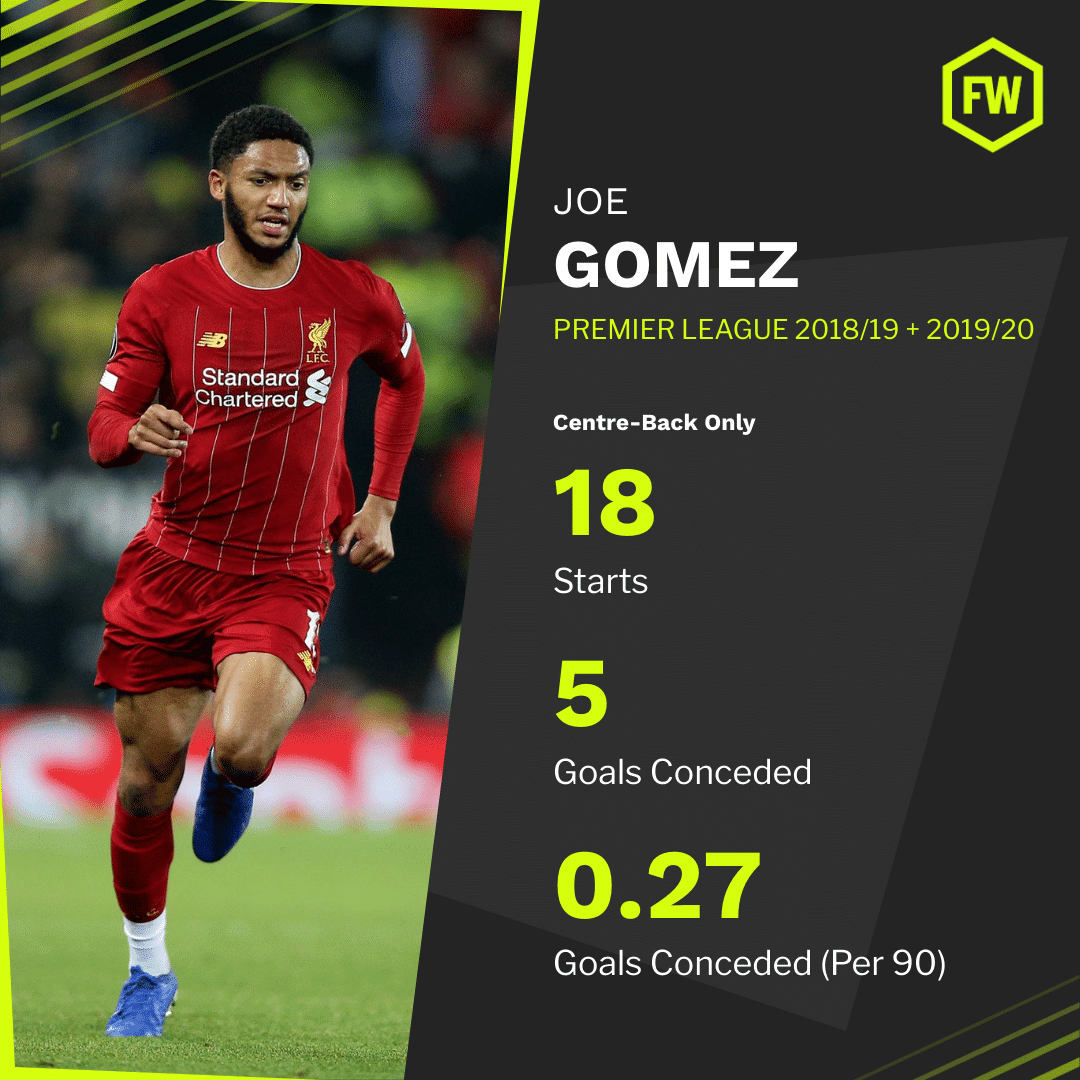 This was the case last year when Gomez and Van Dijk started the season in front of Alisson. The England international made ten starts at centre-back before an injury derailed his promising campaign. In those games, Klopp’s side conceded just four goals. However, in the 18 games Gomez has started alongside the second most expensive defender in the world, the Reds have been breached on just the five occasions.

Remarkably, the champions-elect concede just 0.27 goals per 90 when the pair are united centrally. Over the course of a 38-game season, that equates to just over ten goals. Now, the sample size isn’t the largest but it is over 1,600 minutes worth of data. There’s enough there to start reading into.

It wasn't long ago reports emerged claiming Gomez was unhappy at Liverpool. There was even talk of interest from Arsenal. Earlier in the campaign, he had to settle for a place on the bench. But he's been instrumental in the Reds winning the Club World Cup and stretching their lead at the top of the Premier League to 19 points. It would be hard to imagine Michael Edwards agreeing to part ways with the versatile defender under any circumstances. 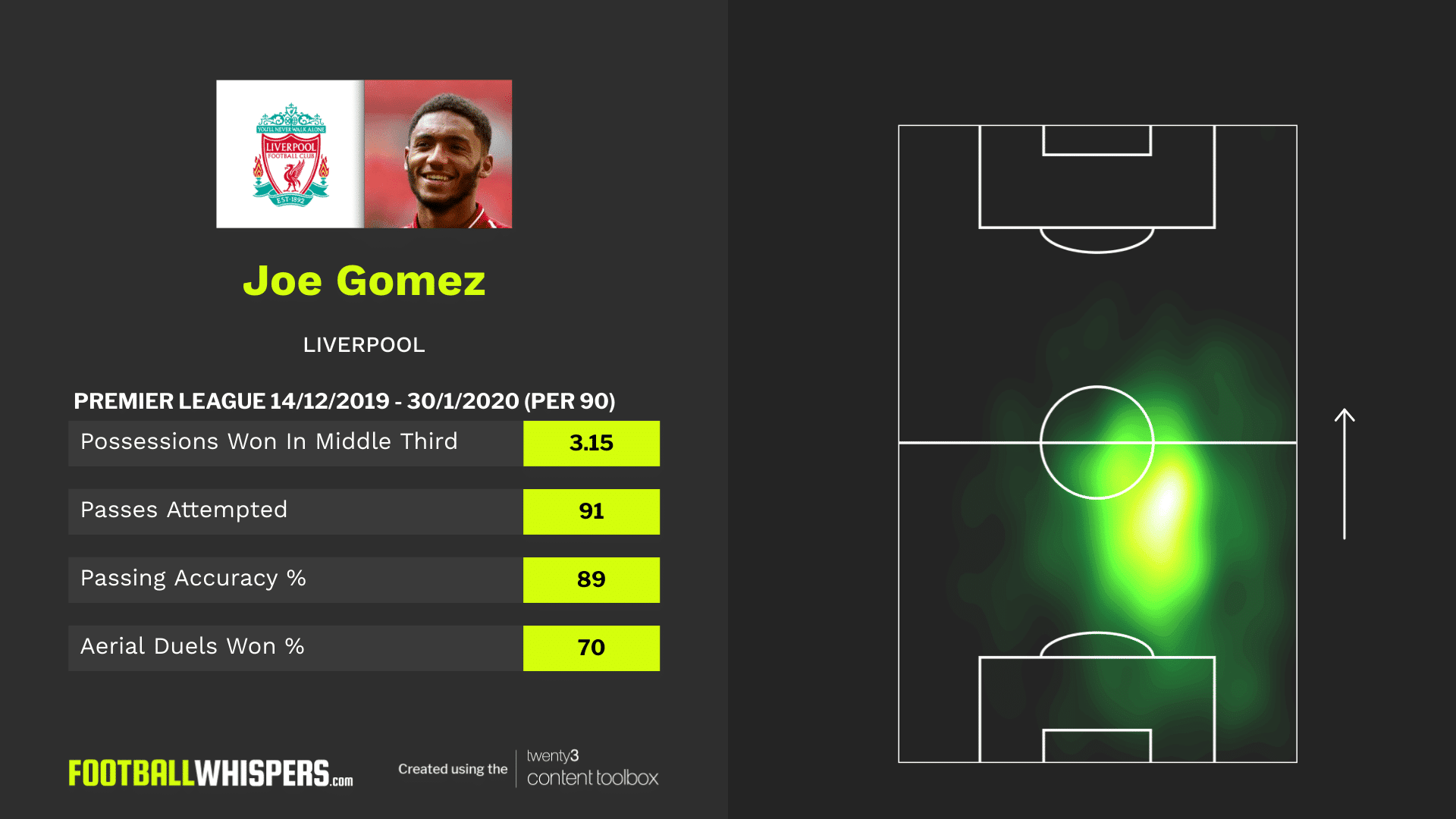 The fact his dominant performance against West Ham went under the radar is a sign of just how good Gomez has been since returning to the team. On the night, he won 100 per cent of his aerial duels. He was also the most involved player for Liverpool after Jordan Henderson, completing more than 100 passes. And despite his aggressive style, the opposition only managed to dribble past him once.

And it's not just in the defensive third he's having an impact. Gomez's use of the ball is a key part of Liverpool's attacking arsenal. Since returning to centre-back, the 22-year-old is attempting, on average, 91 passes per 90 and finding a team-mate with 89 per cent.

But he isn't just playing simple five-yard passes. He's often breaking the defensive lines of the opposition and getting the Reds into dangerous areas. 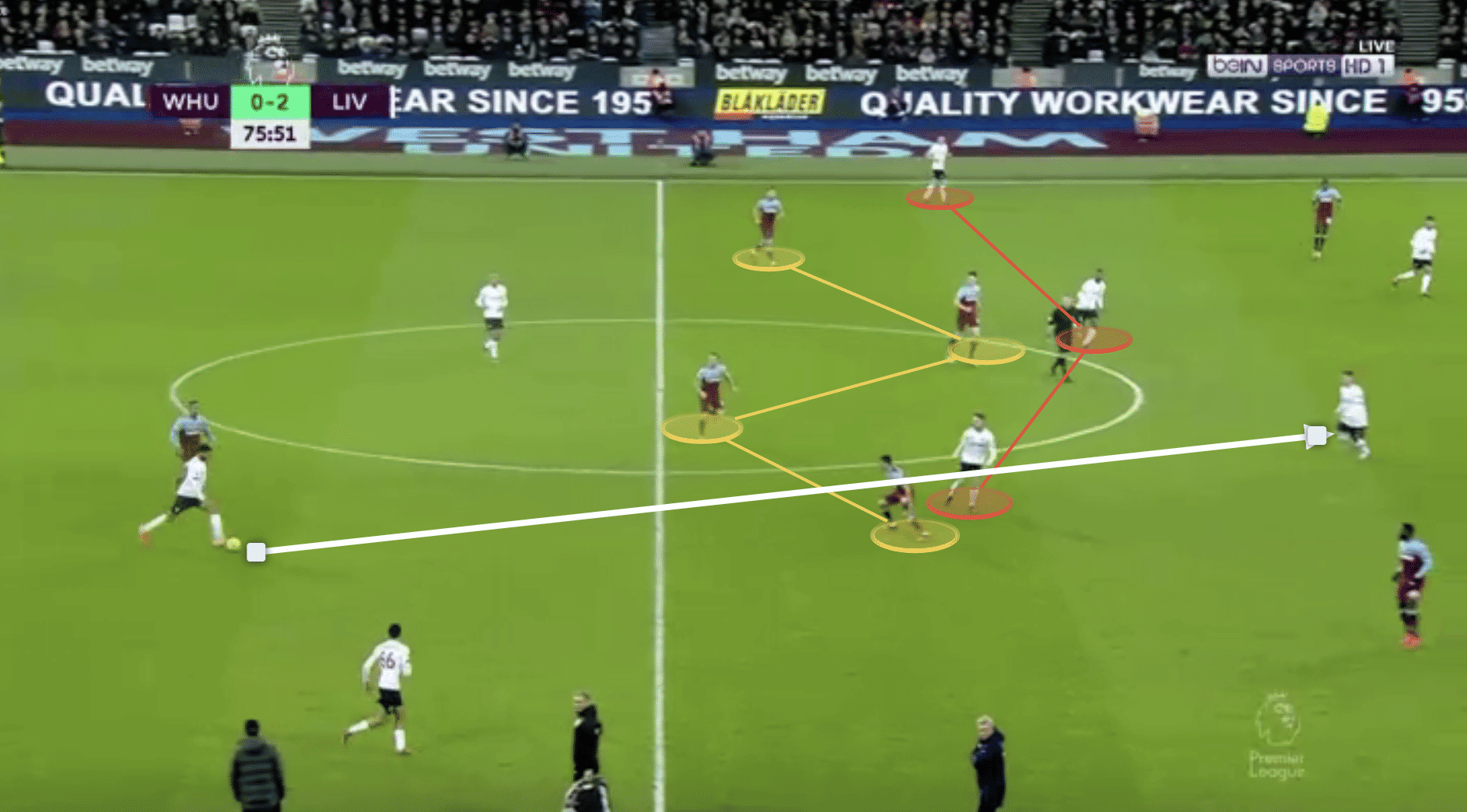 In the still above, Gomez is in possession. Others in this scenario might play a pass out to Trent Alexander-Arnold and task Liverpool's creator-in-chief with the responsibility of progressing play. Not Gomez. Instead, he plays the ball into Roberto Firmino's feet. It isn't the most outrageous pass in the world but it doesn't have to be. It is precise.

In the blink of an eye, West Ham go from looking like they're managing the situation well to seeing five players (the midfield four and Sébastien Haller) taken out of the game. The pass also brings the three Liverpool players highlighted in red into play. With runners from midfield, the away side have options as they head into the final third.

This move ends with Gini Wijnaldum taking a heavy touch when through on goal. But that opportunity doesn't come about without Gomez's initial pass. 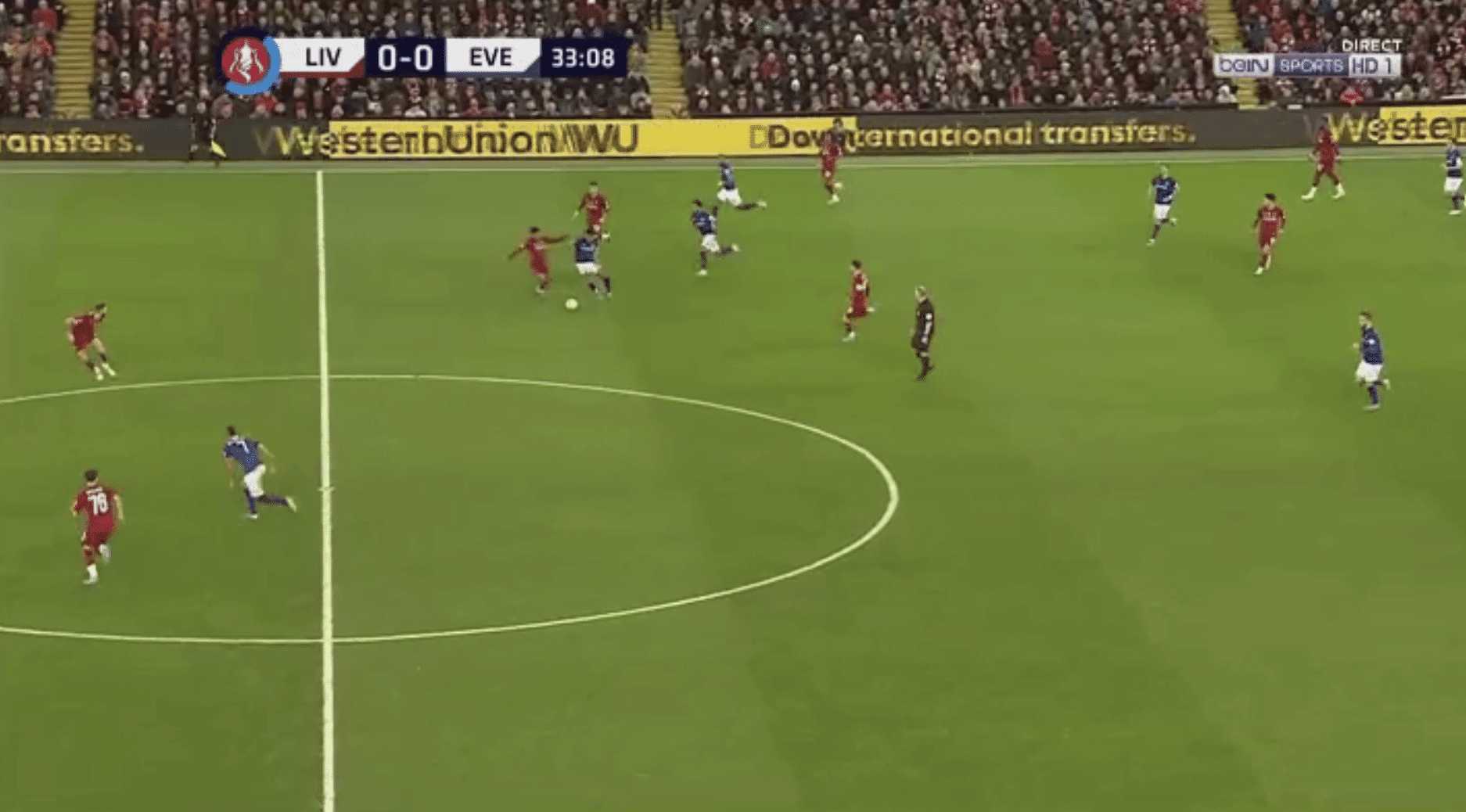 His aggressive style isn't exclusive to his use of the ball. Gomez is also eager to regain possession as high up the pitch as possible, and this perhaps explains why he's winning the ball more in the middle third than he is in the defensive third. In the still above, he quickly closes Dominic Calvert-Lewin down just as Everton are looking to commit men forward.

By winning the ball in this area, Liverpool have more space to play in due to the away side being in transition. Gomez does this regularly and enables the Reds to pin their opponents in their own half for sustained periods. However, the fact he did it while playing alongside Nat Phillips in a young side shows that his confidence isn't directly linked to playing alongside Van Dijk.

Gomez is quickly maturing into a special centre-back and at this current rate, it is only a matter of time before he's rivalling Van Dijk for the accolade of the Premier League's best defender.