Matthijs de Ligt’s move to Barcelona looked inevitable. The Ajax captain seemed set to be following team-mate Frenkie de Jong to the Camp Nou, with a €60million fee being mooted.

That was until Liverpool got involved.

According to Spanish outlet Mundo Deportivo, Barcelona are fearful they could miss out on the 19-year-old due to the involvement of the Champions League finalists. A key part of the Merseysiders convincing the Dutch defender to plump for Liverpool would be Virgil van Dijk.

The powerhouse captains the Netherlands and has already struck up a formidable partnership with De Ligt on the international stage. Replicating it at club level is something that would be tempting to both players.

The fee is one Liverpool can afford. They've banked over £100million from the run to the Champions League final and will no doubt pocket a substantial amount for finishing as runners-up in the Premier League.

The Reds also have a number of players who could leave this summer to boost the coffers.

But is De Ligt more of a luxury as opposed to a necessity? Could that money be better spent elsewhere or do the Reds need a reliable partner for Van Dijk?

The Liverpool No.4 has played alongside a number of players this term and, to his credit, the PFA Player of the Year has been able to sustain his remarkable performances despite this. But solid foundations are built on consistency.

Since making his debut during the 2016/17 campaign, De Ligt has missed just five matches through injury. For context, this season alone Dejan Lovren has been ruled out of 13 matches due to numerous injuries. Joël Matip missed seven matches with a fractured collarbone and Joe Gomez missed the majority of the second half of the campaign after having ankle surgery.

This has been a pattern with Liverpool centre-backs. Lovren and Matip occasionally pick up niggles and are ruled out for periods while Gomez has been unfortunate with injuries since Jürgen Klopp was appointed.

And it’s why, despite all three of Van Dijk’s partners impressing when behind the former Southampton man, Liverpool fans believe there’s a need for a new centre-back. Even though it would be at the expense of Gomez’s development.

The one-time Charlton Athletic left-back went toe to toe with Van Dijk earlier on in the season and even edged him out in some matches. He looked the part in the heart of the back four. But just like with Daniel Sturridge and Adam Lallana, can the Reds really build around a player who has the misfortune of picking up injuries.

Gomez’s latest one was an impact one and shouldn’t be held against him. But when you look at his overall record it isn’t the greatest. And Liverpool wouldn't have to get rid of him if they did sign De Ligt. The No.12 would be an able deputy at both centre-back and right-back.

But is De Ligt really a £50million upgrade on Gomez? 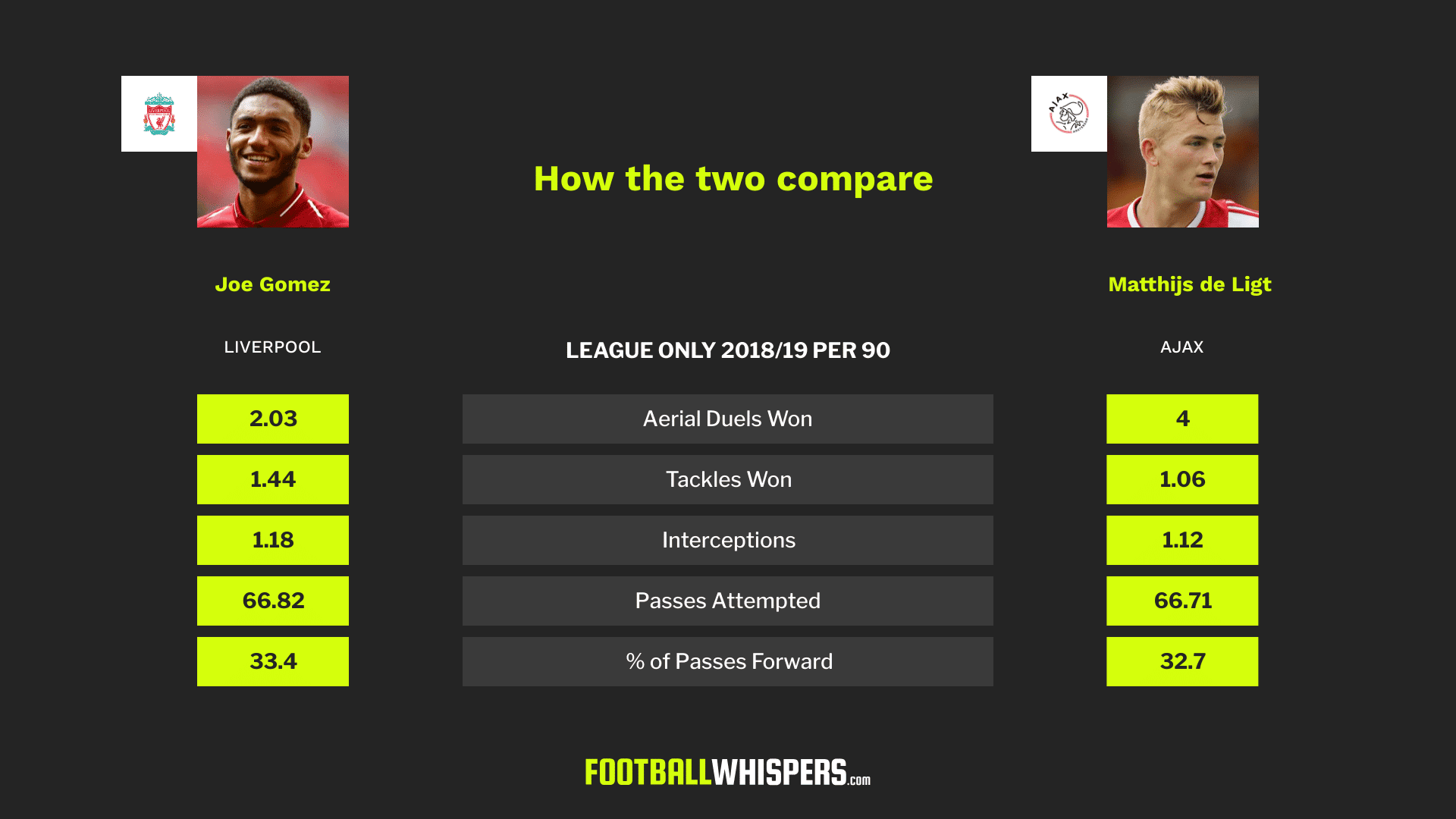 As with most stats, defensive ones tend to be dependent on a few things. The system they’re being deployed in coupled with their role in that system. For example, Van Dijk wins more aerial duels than Gomez because he’s the aggressive one of the pairing. It doesn’t mean the latter isn’t as good as the former in the air, just that they’ve decided to use that dynamic.

However, looking at the stats above, it’s clear De Ligt is more dominant aerially. But other than that, there isn’t that much between the two. They make a similar amount of tackles and interceptions per 90 and both see a lot of the ball, averaging 66 passes. The passes stat suggests the Ajax man would be adept at playing in Liverpool’s system and that dominating possession is something he is used to.

Gomez plays a touch more of his passes forward, but only 0.7 per 90 more. While the graphic only shows a handful of stats, it’s clear that there isn’t much between them.

If Liverpool feel that they can manage Gomez's injuries and ensure he's on the pitch 90 per cent of the time then De Ligt would be a luxury signing. If they feel Gomez himself is a luxury then De Ligt becomes a necessity.

It's something Klopp and Michael Edwards will have to make a decision on sooner rather than later. It's not often a player of the Ajax man's quality is on the market; to pass up on such an opportunity could be a decision the club later regret.