The father of Watford target Joe Bryan saved former Bristol City manager Gary Johnson's life. Now his son is being lined up to save the Hornets from relegation.

Left-back Bryan, who now plays for was the consultant in charge of the operation as Johnson underwent triple bypass surgery.

Bryan's manager at the time, Johnson's son Lee, said: “He’s a top player. But don’t forget that he’s a great person and his dad’s a great person. His dad saved my dad’s life, so we’re quite close families now.”

Watford's predicament isn't that serious. But the Hornets' treatment room is certainly chock full. That is why new head coach Nigel Pearson has reportedly launched a £10million raid for the 24-year-old left-back.

First-choice full-backs José Holebas and Daryl Janmaat are both ruled out with long-term injuries while centre-halves Christian Kabasele, Sebastian Prödl and Craig Cathcart have also been missing through a combination of injury and suspension.

Irrespective of their injury woes, Watford were going to have to do something at left-back this summer. Holebas will be 36 by the time his contract is up at the end of June and has finally shown signs of decline this season.

Former Bologna full-back Adam Masina was signed two summers ago to rival and eventually succeed the Greek. But the Moroccan has struggled to fully convince. He hasn't been helped by Holebas' remarkable fitness record, but when chances have been presented he's struggled to grasp them.

Bryan, then, would be as much a solution for the present as the future. Pearson has pushed right-back Kiko Femenía out to the left in recent weeks with centre-half Adrian Mariappa filling in on the other side. But that is far from ideal and reinforcements must be sought.

What immediately becomes clear when watching Bryan is his similarity to Femenía. Going forward, the Bristolian defender is a threat. Defensively, his performances leave something to be desired. This is reflected in the fact he was a left-sided utility man in the early years of his career, not always nailing down a specific role in Bristol City's side.

More recently, Bryan has made left-back his spot. He played 28 times in the Premier League for Fulham last season following a £6million switch from Ashton Gate but was unable to prevent the Cottagers making an immediate return to the Championship. That's no slight on him, though, and Bryan was one of the few who emerged from last season's catastrophe with any credit in the bank. 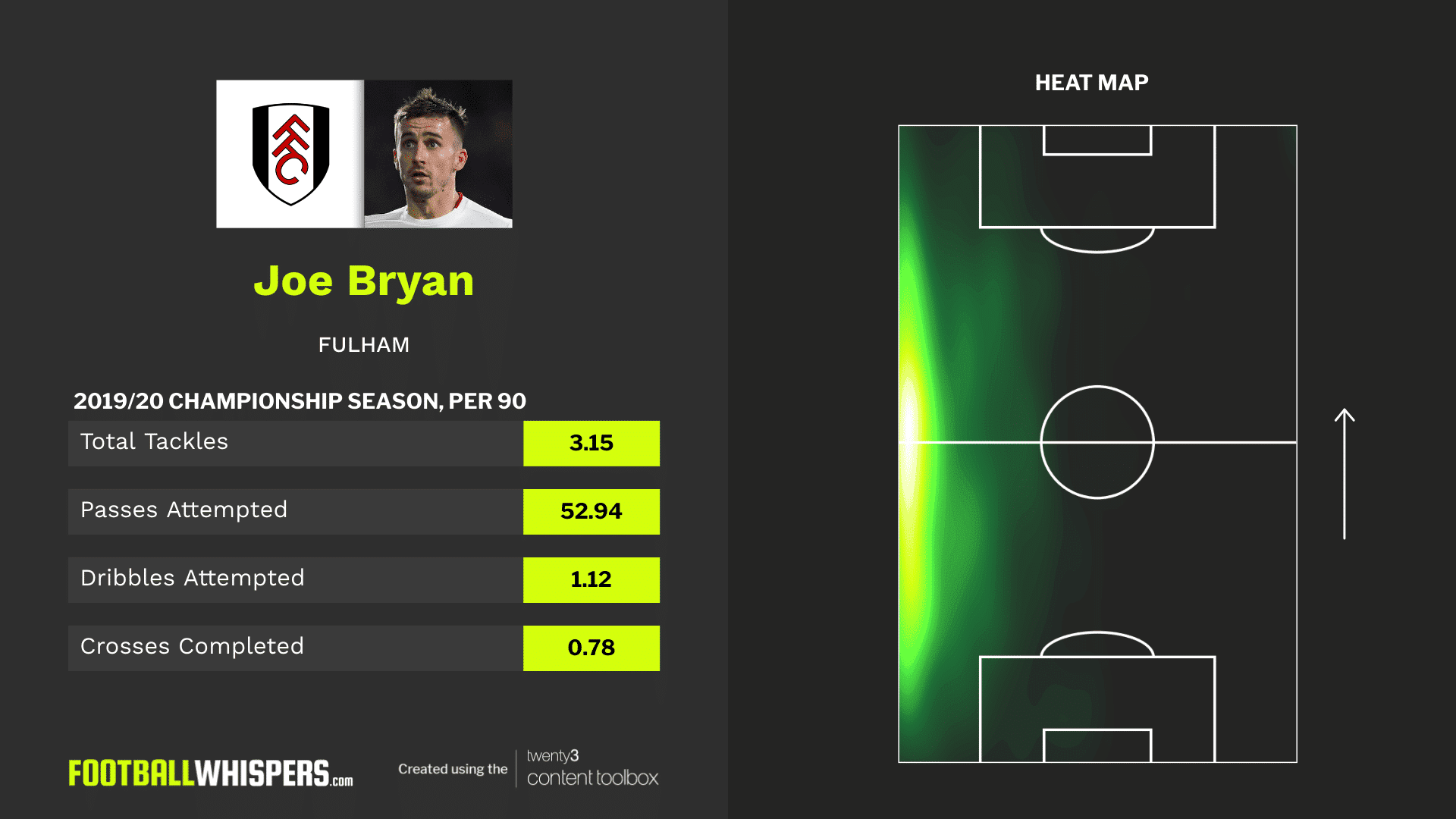 More might have been expected of the 5ft 10in defender this season, though, and he has shown defensive lapses. As an attacking full-back by his nature, he is prone to leaving space in behind though possesses a decent amount of recovery pace – enough to make up the ground against most wingers.

That said, as a one-on-one defender, he is quick, tenacious and hard to beat. In the Championship this season, Bryan has won 2.15 of the 3.15 tackles he has attempted per 90. Only two full-backs have completed more and, given Fulham average 59.6 per cent of the ball, that is an impressive ratio.

And the 24-year-old believes working under former Whites midfielder Scott Parker has benefitted the defensive side of his game.

Speaking to London News Online, Bryan said: “I think the defensive side of my game has come on a bit in the last six months under Scott Parker and I feel a lot more confident. We do a lot more analysis work in training.

“I did play at wing back before, but I’m a left-back and always seen myself as a left-back. I’m much more comfortable in that role.”

Bryan's real strength, though, lies in his ability going forward. Always willing to bomb forward and support the attack – Bryan completes 0.81 of 1.16 attempted dribbles this season – he boasts impressive delivery and can cross comfortably from either shallow or deep positions, giving a real variety to his game.

Ranking sixth for completed crosses by full-backs in England's second tier, Bryan connects with 0.77 per 90 and has supplied three assists. Two of those are from open-play, and only three full-backs have provided more this season.

Ultimately, assists hinge on other players finishing off the chances you create, though, and a more accurate reflection of his creativity comes in the fact no Championship full-back can better the six Big Chances he's carved out this season, a rate of 0.25 per 90.

His 81.8 touches per 90 speak of a player who is heavily involved despite nominally being a defender, while his 0.99 shots only serve to underline his attacking intent. A decent set-piece taker to boot, it's easy to see why Bryan catches the eye in attacking situations.

Since taking over as Hornets head coach on December 6, Pearson has collected ten points from five Premier League games. Only Manchester City and Liverpool have picked up more points than Watford in that time – proof it's minor rather than major surgery required in January. Time will tell whether Bryan can extend the Hornets' top-flight stay.