Football Whispers has teamed up with Vanarama and Motorama in their efforts to raise £150,000 for Prostate Cancer UK across September and October, providing the best coverage of the Vanarama National League online.

Jobi McAnuff will turn 37 in November and, given he has played Premier League football, won the Championship title and gone toe-to-toe with Lionel Messi in a competitive match, you could forgive him if he was starting to wind down.

The Londoner has achieved an incredible amount in a career which started at the original Dons – Wimbledon – in the 2001/02 season in the old Football League First Division.

Since then he has racked up over 700 competitive appearances across the globe and played in the top five divisions in England.

In addition to his domestic achievements, McAnuff has also turned out for Jamaica, where his father was born, in the Copa America, Caribbean Cup and CONCACAF Gold Cup.

Now into the later stages of his career, his enthusiasm remains boundless and it is one of the reasons why he is now captain of National League Leyton Orient and leading their promotion tilt this season.

“Every day he trains to his maximum and conducts himself on and off the pitch in a manner which rubs off on young players.

“Modern-day professionals sometimes get too much too quickly and he is one of the old pros. He is a class act.” 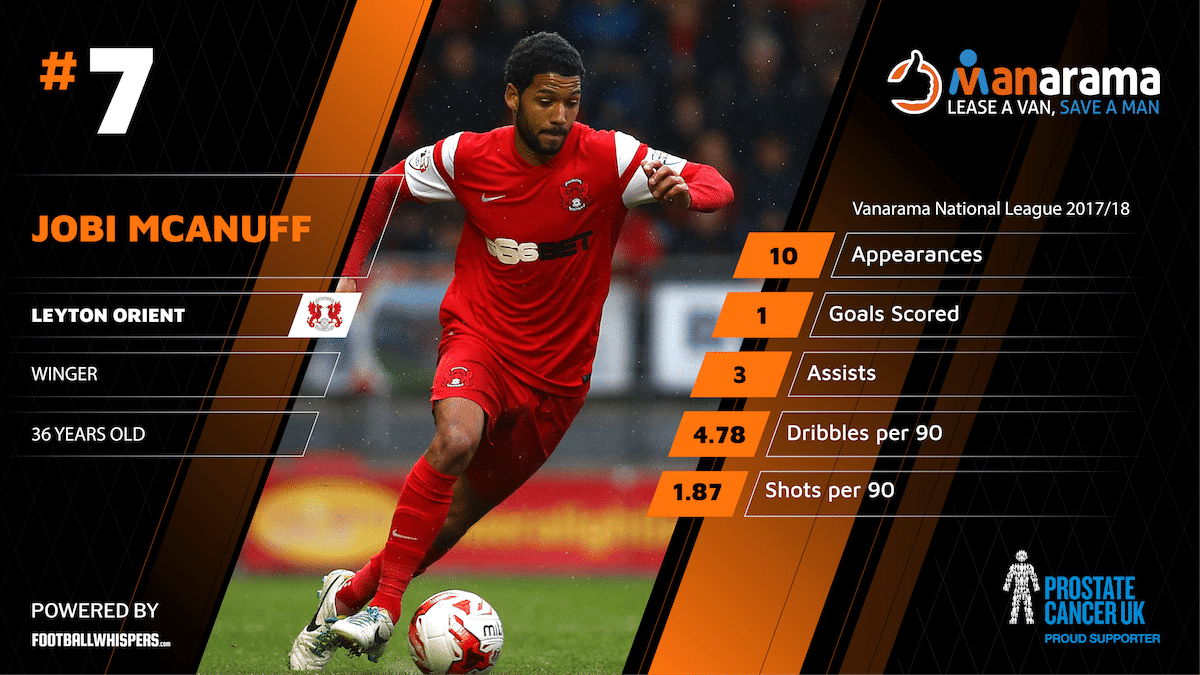 Back to the start of the journey. McAnuff was born in Edmonton and first appeared for Wimbledon on 25 August 2001 as a substitute and it was the beginning of a fine spell for the young winger in south London.

Although the Dons soon found themselves in financial trouble, the wide man ended up being an integral part of their team and made over 100 appearances before he did eventually leave to help the club raise much-needed funds.

McAnuff swapped south of the capital for east as he joined West Ham United at the start of 2004 but moved on quickly to Cardiff City in August of that year and then had to depart Wales due to the Bluebirds having money worries.

For the start of the 2005/06 campaign, the tricky winger was back in London, this time at Crystal Palace, and here he found a home.

His first season at Selhurst Park nearly resulted in promotion under Iain Dowie, but the Eagles lost out in the play-off semi-finals.

Unfortunately, his second term at Palace was less successful from a team point of view and Watford purchased his services for an initial £1.75 million in June 2007.

After a slow start in Hertfordshire, McAnuff was part of another play-off push, but it again ended with heartbreak and the following campaign saw turmoil at Vicarage Road with several management changes and a new chairman taking over too.

The last manager McAnuff had at Watford was Brendan Rodgers and he took the now-consistent winger to Reading at the end of the 2009 summer.

It would prove to be a special time for both the Royals and the Londoner, who would spend five seasons calling Berkshire home.

More Championship play-off pain was to occur initially with McAnuff and Reading, under Brian McDermott, losing at Wembley to Swansea City in May 2011.

The following campaign, McDermott made the fans favourite captain and it proved to be an inspired decision.

Despite a slow start, the Royals hit their stride in the second half of the season and clinched the title to seal promotion to the Premier League with McAnuff captain.

Having gone close on so many occasions, he had finally made it to the top flight and, although the 2012/13 term proved to be a tough one for Reading, there were plenty of highlights

One memorable moment during the campaign occurred on October 30 2012 when the Royals hosted Arsenal in the League Cup fourth round.

The score ended 7-5 to the Gunners after extra time. McAnuff told The Comet: “We went 4-0 up against quite a strong Arsenal team, but they pulled one back just before half-time, and despite it being 5-5 at one stage they eventually beat us 7-5.

“I suppose it’s something to say you’ve appeared in one of the most amazing games in football history ever, but I’d have much rather it had been a quiet game if we had beaten Arsenal.”

After a brave effort, Reading’s relegation was eventually confirmed and after failing to go up at the first time of asking in the 2013/14 season, McAnuff said goodbye to the Madejski Stadium after five memorable years.

It was at this stage the then 32-year-old began to look to the future and decided to sign up for what appeared a new, exciting project at Leyton Orient.

However, it was anything but and his first campaign in east London resulted in more disappointment, with O’s finishing in the bottom four of League One and going down.

McAnuff was at least able to lift his spirits in the summer with an unforgettable time with Jamaica.

Not only did he play in the 2015 Copa America and against Messi’s Argentina, but he was able to swap shirts with the Barcelona great.

The meeting with the superstar in Chile appeared to inspire McAnuff as the next time he played, in a Gold Cup fixture against Costa Rica on 9 July 2015, the Jamaican got on the scoresheet for his country for the first time following a mazy run in a 2-2 draw.

It would prove to be the only international goal of his career, but what an effort it was and yet more dark times were to come.

When McAnuff returned to E10, then-Orient head coach Ian Hendon was told he was not allowed to select the experienced ace for their League Two campaign.

Eventually, in November, Hendon forced Francesco Becchetti to reverse the decision after an injury crisis and the winger was back involved again.

Upon returning, McAnuff, ever the professional, insisted: “I am not going to say anything. I am happy to be back and what has gone on has gone.”

He added: “I just want to play football, that is all I want to do. The biggest frustration for me has been being at home on a Saturday or in the stands watching.

“On the pitch is where I want to be on a Saturday afternoon so I am just buzzing to get out there.”

McAnuff quickly made up for lost time with several superb performances and brilliant goals in another turbulent season for O’s where they used three managers, which was at least an improvement on the 2014/15 campaign when they went through five!

One of whom was player-manager Kevin Nolan, and McAnuff once joked: “You do feel obliged to pass to him sometimes, otherwise he’ll give you a going over!

“I am personally disappointed because I am now older than the manager, which isn’t nice for me.”

Even though he showed his worth, the Jamaican departed on a free in the summer of 2016 and spent the next term at Stevenage – once again defying his age with many more consistent displays.

Yet after one year in Hertfordshire, McAnuff made the type of decision which sums up his character and longevity. 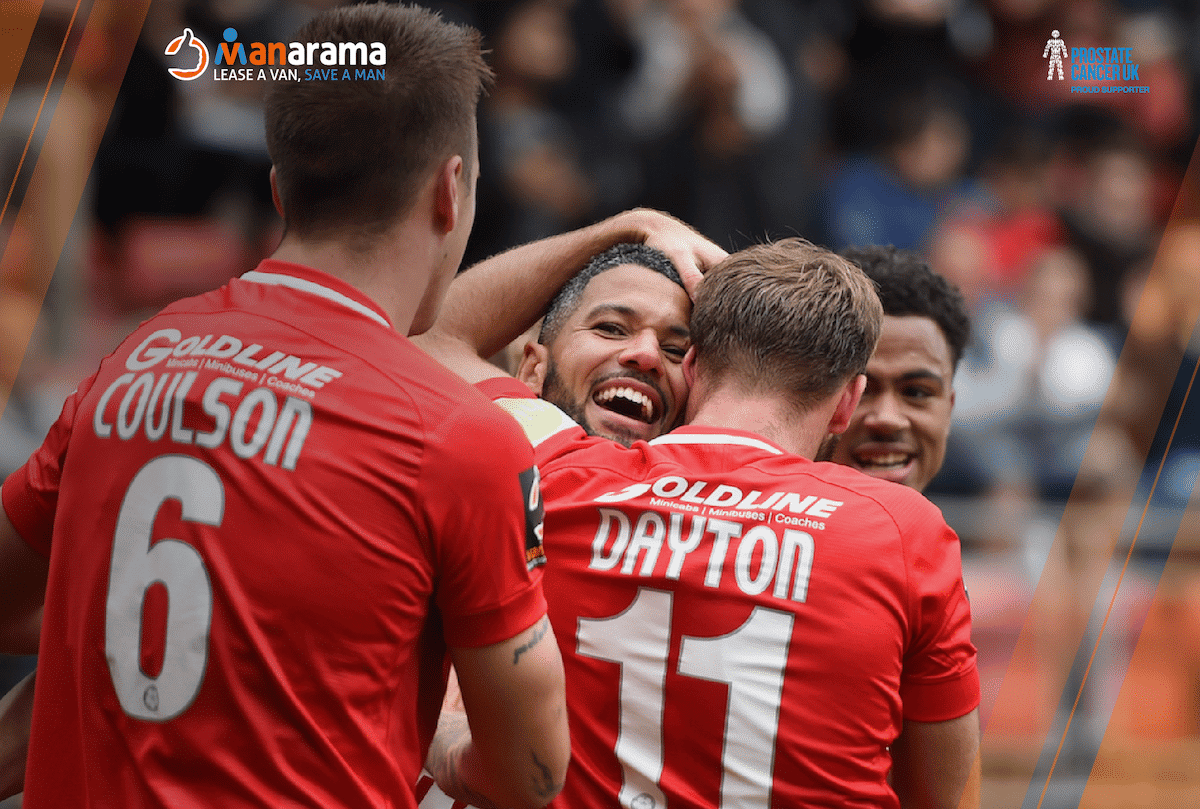 A chance to return to Orient arose and even though they had just been relegated to the National League – a level McAnuff had never dropped down to before – and had a squad full of youngsters, the Jamaican jumped at the opportunity.

Why? One reason is because he loves a challenge. He said: “That is something I have always had in my career and that has always kept me going – the desire to want to prove something and achieve.”

McAnuff, who was made O’s captain by Justin Edinburgh, added: “I definitely want another promotion on my CV and that is the aim.

He continued: “Another big factor in me coming back was the fact I knew the young lads and in my difficult time here, I tried to make it as positive as I could for myself and I would like to think I helped a few of them along the way with bits and bobs.

“I was training with them every day for a little bit, so it was nice to come back and see them and how they are developing.

“Part of the process for me now is to help them and guide them. We have some really talented lads, so it is just about bringing it all out.”

One in particular, Josh Koroma, has been taken under McAnuff’s wing and they room together on away trips.

The talented teenager candidly said: “He’s a great role model. He has played over 600 times, played more than 30 international games and anyone in our team would take the career he has had.

“After training he is always out on the pitch with me working on my game and helping me to better myself, so he has been great to me.”

You imagine when McAnuff does finally hang up his boots, he would make a brilliant coach, but for now, he has plenty of juice left in the tank.