Pablo Fornals completed a big money move from Villarreal last week and joined goalkeeper Roberto who signed on a free transfer from Espanyol.

And Manuel Pellegrini is looking to make it a hat-trick of additions from the Spanish top flight with Joan Jordán now atop his wishlist. The Eibar midfielder, also believed to be an Arsenal target, has been one of the most consistent if not eye-catching performers in Spain in recent seasons.

According to Sky Sports, the Hammers are prepared to pay the 24-year-old's £13.4million buyout clause, a nothing fee in the transfer market these days.

If the deal happens, Jordán could prove to be one of the summer's biggest bargains and West Ham may have their long-term successor to Mark Noble in the middle third of the pitch.

At 32, the club captain – often the heartbeat of the team – isn’t getting any younger. Sooner or later, he'll need to be replaced. Given it’s rare that a player of Jordán’s quality is available for such a fee, the Hammers are right to act now. 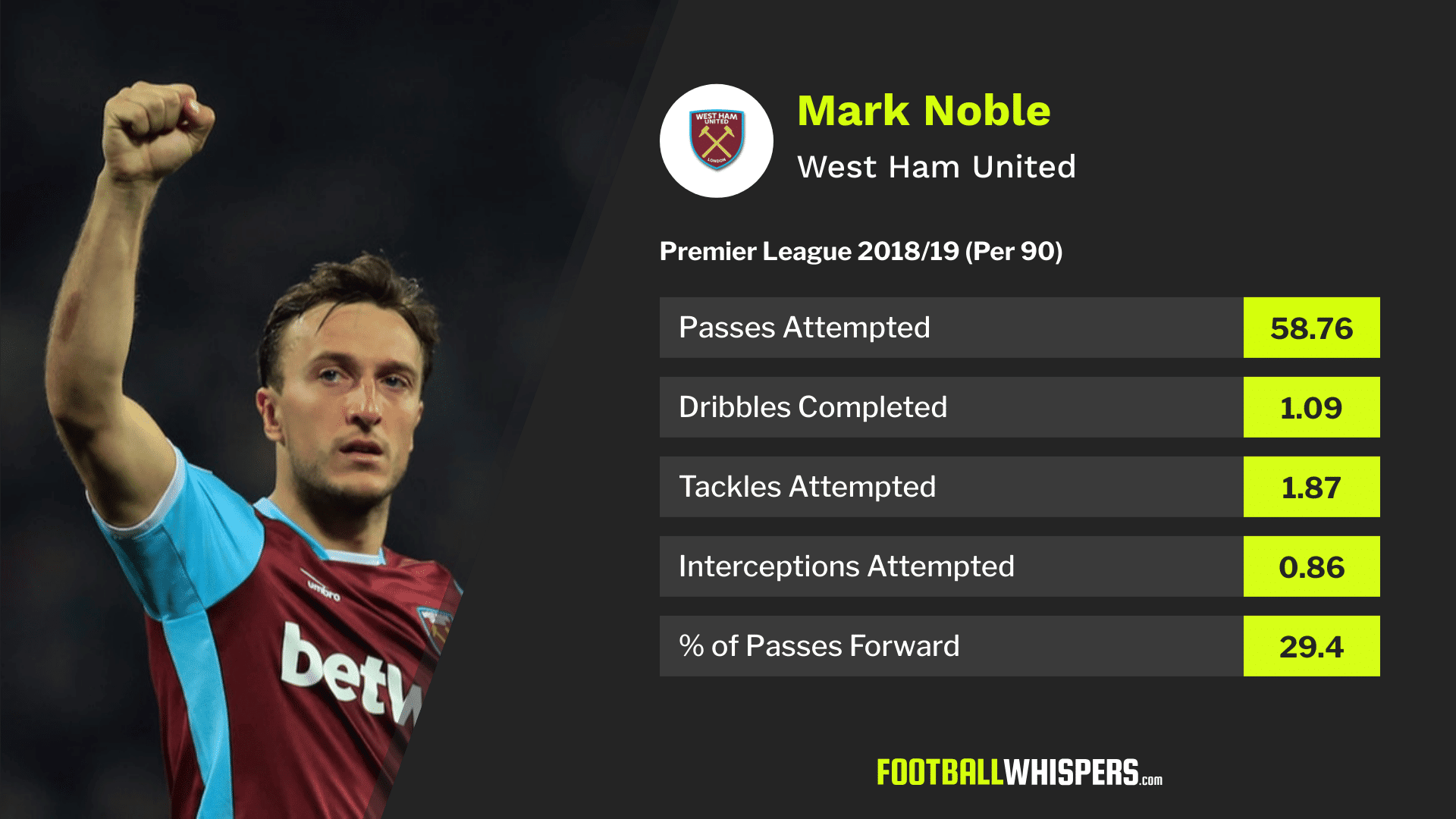 Declan Rice caught the eye for Pellegrini's outfit last season but as the destroyer. Noble was the man still tasked with linking the play. The man to connect the defence and the attack.

Noble has never been a midfielder who slaloms past opponents; he averaged just over one successful dribble per 90 last term. Instead, he relies on being a progressive passer and almost 30 per cent of the 58 passes per 90 he attempted in the Premier League last season moved the Irons up the pitch.

He's also always willing to put a foot in and interrupt opposition attacks of spells of possession – Noble attempted a combined 2.73 tackles and interceptions on a per 90 basis during the 2018/19 campaign.

It's clear he's an all-rounder. And West Ham need someone with similar qualities to replace him in their midfield. 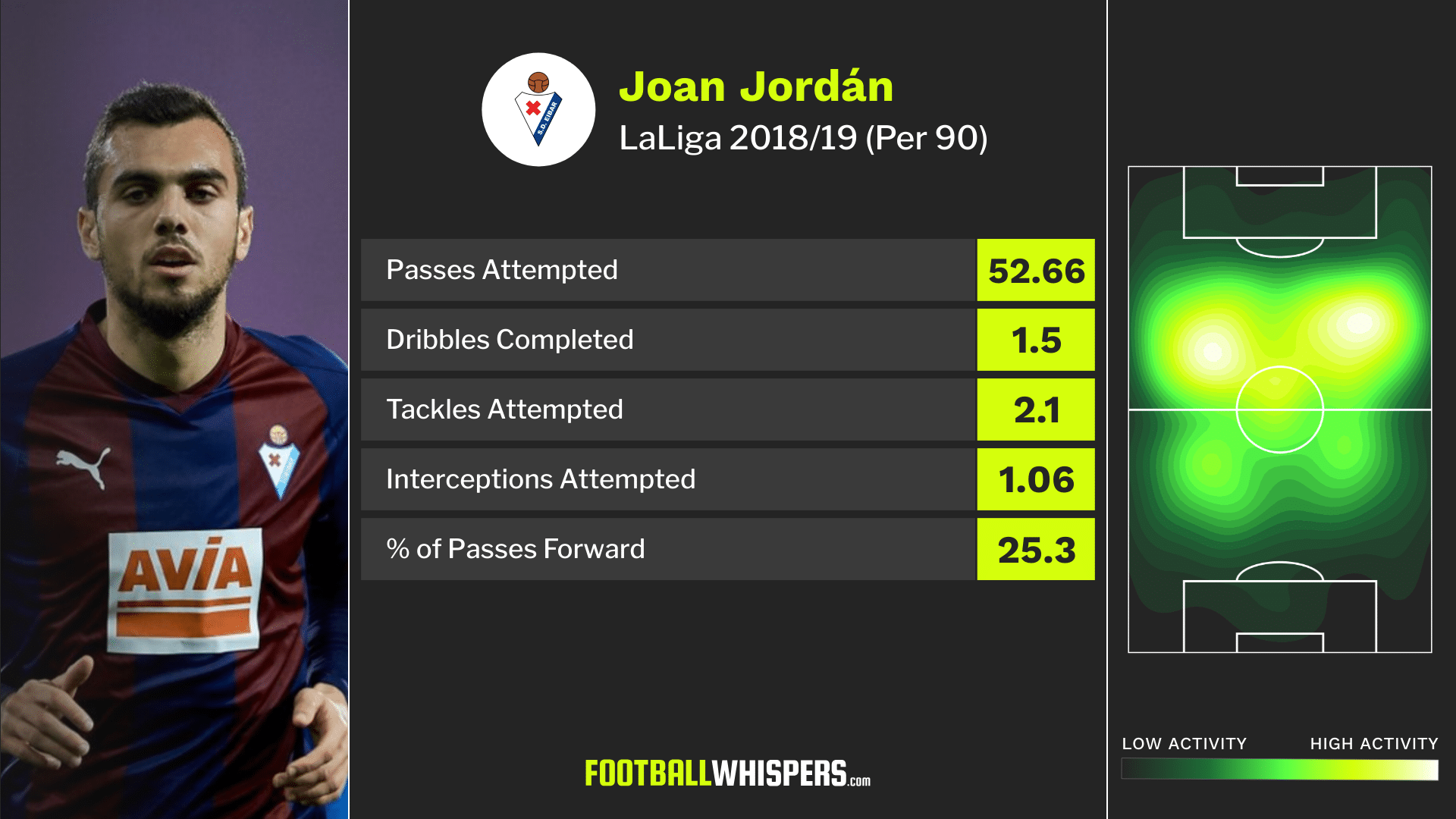 Jordán ticks a number of boxes. He's used to seeing a lot of the ball, averaging just over six fewer passes on a per 90-minute basis, and completes more dribbles and attempts more tackles and interceptions than Noble.

Of course, these stats hinge on team set-up and the demands placed on said player, but they do show that he is capable of playing that Noble role.

He's just as progressive in possession, too, with a quarter of his passes going forward. That may not sound like an awful lot but Jordán isn't Eibar's creative hub. He's tasked with keeping possession ticking over and does just that.

That's clear when looking at his passing sonar (below). Jordán moves the ball side to side to stretch the play. This makes space centrally for others and was a key part of Eibar's style. 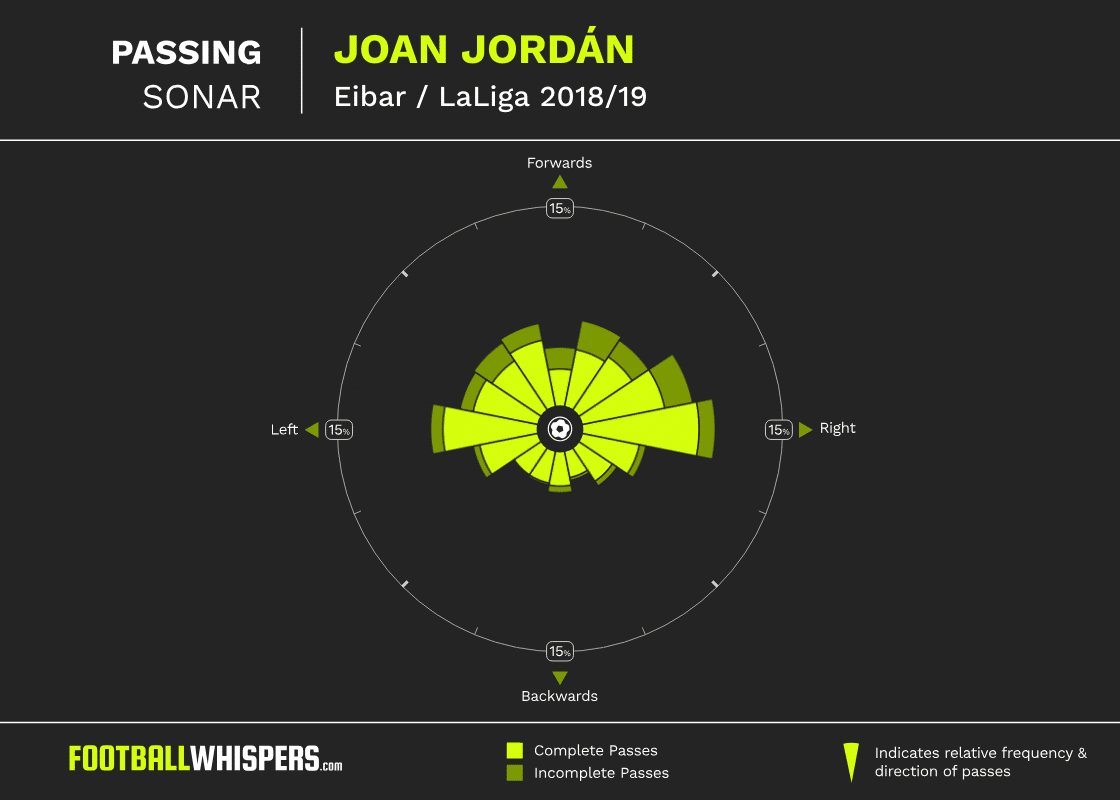 Midfielders these days are tasked with getting on the scoresheet, too. And while Jordán is a scorer of great goals, he is not prolific.

All four of his goals during the 2018/19 season came from outside the area with two of those direct from free-kicks. He's something of a set-piece specialist; of the 1.99 key passes he made in LaLiga on a per 90 basis, 1.15 of those came from set pieces.

His output isn't sustainable but he can be viewed as a luxury. His goals, unexpected as they are, are game-changers. His ability to pick a pass from corners and free-kicks means he can be the man to provide the likes of Issa Diop and Fabián Balbuena the ammunition they need to be added goal threats.

The La Liga revolution at West Ham is something to keep an eye on. Adding Jordán to the midfield will directly impact how influential Fornals can be.

If it clicks from the off, the Hammers could be surprise contenders for a Europa League place, although they would need to keep Felipe Anderson and Marko Arnautović in East London.