With Aaron Ramsey soon to depart for Juventus, Arsenal are in need of a replacement. And it appears they have set their sights on Eibar midfielder Joan Jordán.

The 24-year-old, who joined the club from Espanyol in 2017, has impressed in La Liga this season, catching the eye of several English clubs. He has helped modest Eibar to eleventh place in the Spanish top flight with ten games of the season remaining, excelling in José Luis Mendilibar’s high pressing system.

Jordán ability to perform so consistently in the middle of Mendilibar’s 4-4-2 will, no doubt, have impressed Unai Emery. So, too, will the Spaniard’s ability to control matches from midfield, an area of his side’s game Arsenal’s boss is clearly looking to improve.

Jordán, although touted as a direct replacement for Ramsey, differs from the Welshman in many areas. He operates in a deeper role, often collecting the ball from the centre backs and distributing to his more advanced teammates.

Despite his more defensive tendencies, though, Jordán is a goal threat. He has scored struck times in La Liga this season, all of which have come from outside the box. And he has provided four assists, thanks largely to his excellent deliveries from set pieces and wide areas.

Jordán, then, is clearly a busy midfielder, and that is what Emery appears to prioritise. Ramsey, though technically superb and accomplished in the final third, may have struggled in the long term to fit into a midfield likely to be based on aggressive pressing.

Arsenal will, though, lose Ramsey’s contribution in attack. Jordán is far less adventurous than the Welshman, and tends to score, and create, most of his goals from outside the box.

There is a stark contrast between the two when it comes to attacking stats, although they have scored the same number of goals (3). Ramsey averages 5.17 touches in the opposition box per 90 minutes, compared to Jordán’s 1.1. He is significantly better off when it comes to expected goals per 90, too: 0.27 to Jordán’s 0.08. 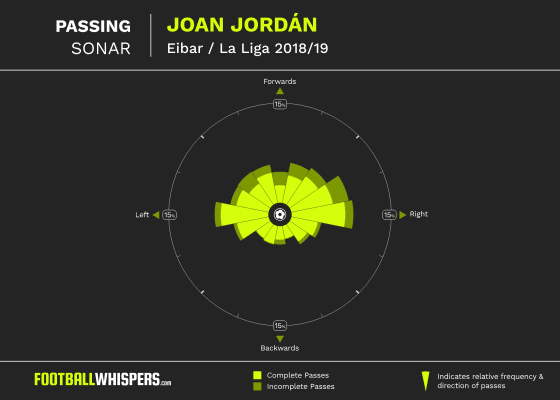 It is a similar story when it comes to expected goals assisted per 90: Ramsey averages 0.18, while Jordán is at just 0.04. If Arsenal fans are expecting Ramsey’s potential replacement to produce a similar output in goals and assists, then, they might be disappointed.

But it does not seem to be Emery’s intention to find a like-for-like replacement. He is clearly confident in his other attacking players to fill the void left by Ramsey; scoring goals has certainly not been an issue for the Gunners this season, with or without the former Cardiff man in the team.

Jordán, hardly the most high profile of names, has likely been identified because he fits into Emery’s future plans. And with Arsenal unable to spend huge sums of money in the summer, the Eibar man represents good value for money.

He has a release clause of just €15million and his contract is set to expire at the end of next season, so this would appear to be a relatively risk-free move from Arsenal’s perspective.

Expectations will be low, but Gunners fans might find themselves pleasantly surprised should a deal for Jordán be completed. The 24-year-old is adept at playing the ball long and short, an accomplished ball winner and an excellent set piece taker.

And, crucially, he offers versatility. Jordán has, on occasion, filled in at both right and left midfield in Eibar’s 4-4-2, and he has the attributes to perform reliably whether operating in a defensive or more attacking midfield role.

Jordán may not have the deftness and guile of Ramsey, but he could well prove to be a shrewd acquisition.