Since joining Eintracht Frankfurt on loan from Real Madrid, Jesus Vallejo's adaptation to the Bundesliga has been nothing short of remarkable.

The 19-year-old's outstanding form has been a vital element as to why his side have only conceded 10 goals in their 12 matches and currently occupy equal third in the Bundesliga table. Niko Kovac, the Eagles' manager, himself a former high quality defender, has been amazed by the youngster's superb start, saying: “I've never seen a player like [Vallejo], as a player or as a coach. This kid is scandalously good.”

Frankfurt's keeper, Lukas Hradecky, then went onto add: “He is our best player at the moment. Vallejo makes my work a lot easier.”

Having already produced strong outings against some of the best the Bundesliga has to offer, including Bayern Munich, Bayer Leverkusen, Borussia Monchengladbach and FC Koln, Vallejo faced another massive test against Borussia Dortmund last weekend. But in now customary style, the Spaniard passed with flying colours.

With Thomas Tuchel opting to start with two traditional forwards who largely operated in his designated area, the excellent Pierre-Emerick Aubameyang and the more robust Adrian Ramos, Vallejo did a fantastic job of nullifying the effectiveness of the troublesome duo.

In what was arguably a man of the match performance by the man Madrid signed from Real Zaragoza for €5 million back in 2015, and his finest in a Frankfurt shirt, he exuded composure, authority and intelligence in everything he did.

From his left sided centre-back post, within Kovac's three man central defensive unit, the way Vallejo remained concentrated and alert throughout the 90 minutes, hardly losing an individual duel in the match, was a glowing testament to his diligence and dedication to the cause.

Key to his error-free outing was his decision making and judgement. Thoughtful yet physical, the towering stopper always made the right call about when to step out, track his opponent, hold his ground, cover a colleague or when an immediate intervention was required. Having to deal with Aubameyang and Ramos at various stages throughout the match, this aspect of his game provided a firm foundation from which to undertake his work.

As a side back, a key component to his role was to cover runs into the interior corridor or half space — something he also did superbly. Showing a great understanding with his left wing-back Bastian Oczipka. The pair capably marshalled this vital area of the pitch, with the way they communicated and got their marking crossovers spot on especially impressing. Moreover, being so aware to Dortmund's forwards' runs into the channel suitably limited their effectiveness on the match.

Aided by his notable speed, which recently saw him out-pace Barcelona loanee Alen Halilovic in Frankfurt's game against Hamburg, his immense strength, competency in the air and his raking long legs, it's unsurprising that he's such a challenging proposition for any attacker to face off with. Indeed, his athleticism certainly came in handy when the blistering Ousmane Dembele came on in the second half too, with Vallejo doing a splendid job on the hotshot.

Additional reasons for positivity arose from the way he kept his defensive line and spacing with his colleagues well synchronized over the duration of his team's 2-1 win. 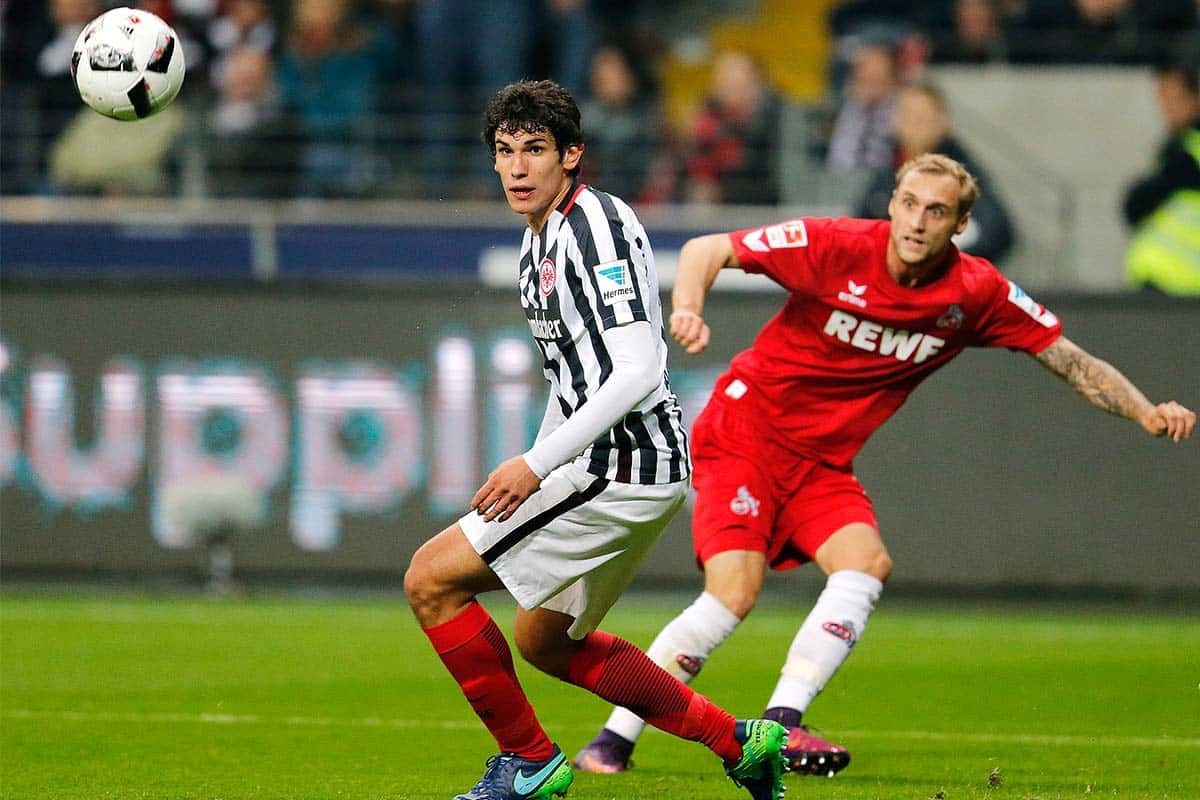 All things considered, this was a performance of the highest order from the gifted defender, in a game where he used his physicality, footballing IQ and tactical acuity to once again have a profound impact. Undoubtedly, this match served as another glowing example of how his multifaceted set of attributes ensured he's able to proficiently deal with opponents who possess very different qualities and still be successful.

While satisfied with the result, Vallejo urged his side to remember that there's no room for complacency and that they must keep their heads down and keep working hard. “That was a very important victory and the reward for the hard work we do every day,” he said after the match.

“It is nice to be able to reward ourselves with another three points, but now we must not let go and stay focussed. Of course the coach has a decisive part in the fact that things are going so well. He has set us very well and we follow his instructions.”

It really has been tremendous how swimmingly he's integrated and adapted to life in the Bundesliga, and when asked about the biggest challenge he's faced, his answer made for great listening. “Especially with transitions you need to be wary. German football is a high intensity and transitions are very fast.

“You have to be very concentrated because the ball is so early in the counter area as the  other teams mount a counterattack and quickly have it in your area. You have to be very prepared physically and mentally to meet the requirements of this championship.”

Furthermore, the way he's seamlessly transitioned into playing within a back four and a back five has been an another endearing aspect of his time under Kovac. Vallejo interestingly credits his former manager at Zaragoza, Ranko Popovic, with giving him the familiarity and platform needed to perform both both roles as to why he's had no issues in either system.

“I think it's good for the team that we manage the two variants because every game is different and the more tactical resources we can handle, the better it is for us,” he noted. “With both schemes I am comfortable.”

He's form's been so good, in fact, that, on top of recently being rated by Kicker Magazine as the best centre-back in the Bundesliga, there's also talk of Real Madrid wanting to call him back in January.

Vallejo himself didn't indulge in any suggestions of him returning prematurely to Madrid, however, for he knows he still needs to prove himself and continue to gain vital experience at Frankfurt. “It would be a mistake to obsess about playing already for Real Madrid,” he said.

“What I must do is perform well in Germany, I must keep my feet on the ground and live in the present. And the present at the moment is Frankfurt.”

Indeed, it's encouraging to see the 19-year-old show such patience and level headedness and not let all the praise go to his head. Already possessing such a well rounded game, physically, mentally and tactically, should definitely ensure one day he'll make it at Los Merengues as a starter.

But for now, though, doing everything in his power to hone his craft under the appreciative stewardship of Kovac will remain his primary focus.