Jesús Vallejo is undoubtedly one of the most talented and promising young centre-backs around at the moment.

Aged just 20, he’s been hugely impressive in Germany where he’s been playing at Eintracht Frankfurt on loan from Real Madrid.

Madrid signed Vallejo from Real Zaragoza, where he was captain at a young age, in the summer of 2015 for €6million, leaving him there last season.

Before the current campaign started, the decision was made to send him to the Bundesliga in the hope that his game would come on like Dani Carvajal did after a spell there, and the results have been more than encouraging.

His form has been so good that in January, Kicker Magazine rated him as the best performing centre-back in the first stage of the Bundesliga season.

And the talk from Spain is that he may have a role to play at Real Madrid next season.

With Pepe leaving the Estadio Santiago Bernabéu at the end of the campaign, Vallejo would be a no fuss replacement.

There would be no need to have to buy anyone in the transfer market, it would be an easy step up to the first-team.

But the question that Zinédine Zidane and his staff will have to decide is whether the 20-year-old would benefit from a further year in Germany before returning to the Spanish club.

Should he return to Madrid, Vallejo would be able to learn under Sergio Ramos and compete with Raphaël Varane and Nacho. But another year in Frankfurt, which could bring him a taste of European football with the Europa League, could see him return as a more complete player after another year-long loan.

Eintracht’s sporting director Bruno Hubner wants to keep the defender for another season, but he thinks Madrid will want to take him back.

“I believe that Real will recall him, have him train with the squad and then make a decision whether to send him on another loan or keep him,” he told Frankfurter Rundschau. 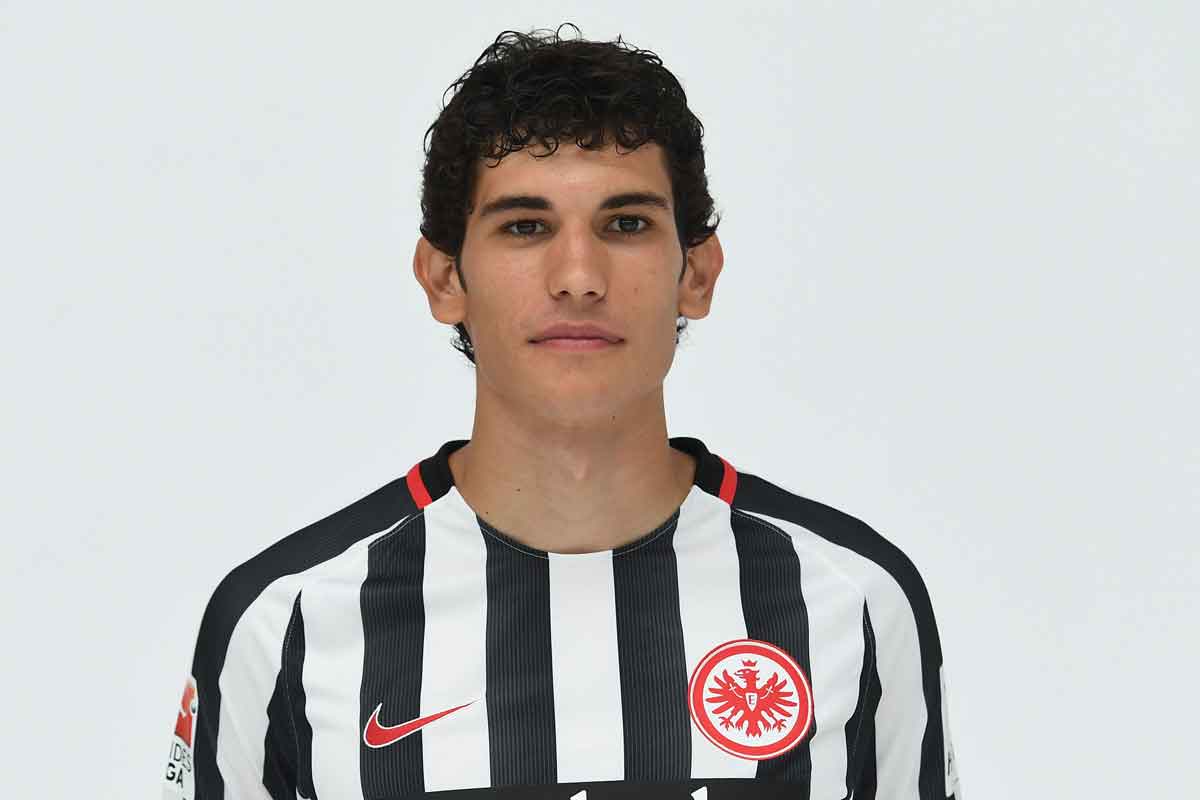 “That might very well be, but it’s a fact that Jesús wants a clear structure.

“I have rarely met a player with a clear mind and idea as to what he wants, he’s very, very far.

“And he’s only 20, and this could also play an important role.

“He will not allow them to send him on loan somewhere.”

And his strong personality has also been praised recently by Vallejo’s Spain under-21 international colleague Jorge Meré.

“Above all he has a great personality,” the defender told Marca.

“I think his physical condition, his pride and heart make him a very important person to whatever team he is in.

“He has already demonstrated this at Zaragoza.

“Wherever he has to play, he doesn’t complain about anything he is an incredible person.

“I do not know what he can contribute to Real because the competition for places is very high, but I know that the Madrid fans will receive him with great affection, he will be happy and hopefully he can become a starter for a team like Real Madrid.”

How does Vallejo compare to Real Madrid’s current options?

If Vallejo does return to Real Madrid, he’ll need to prove himself alongside Ramos, Nacho and Varane.

But how does the young Spaniard compare? We’ve taken a look at the league stats of the quartet. 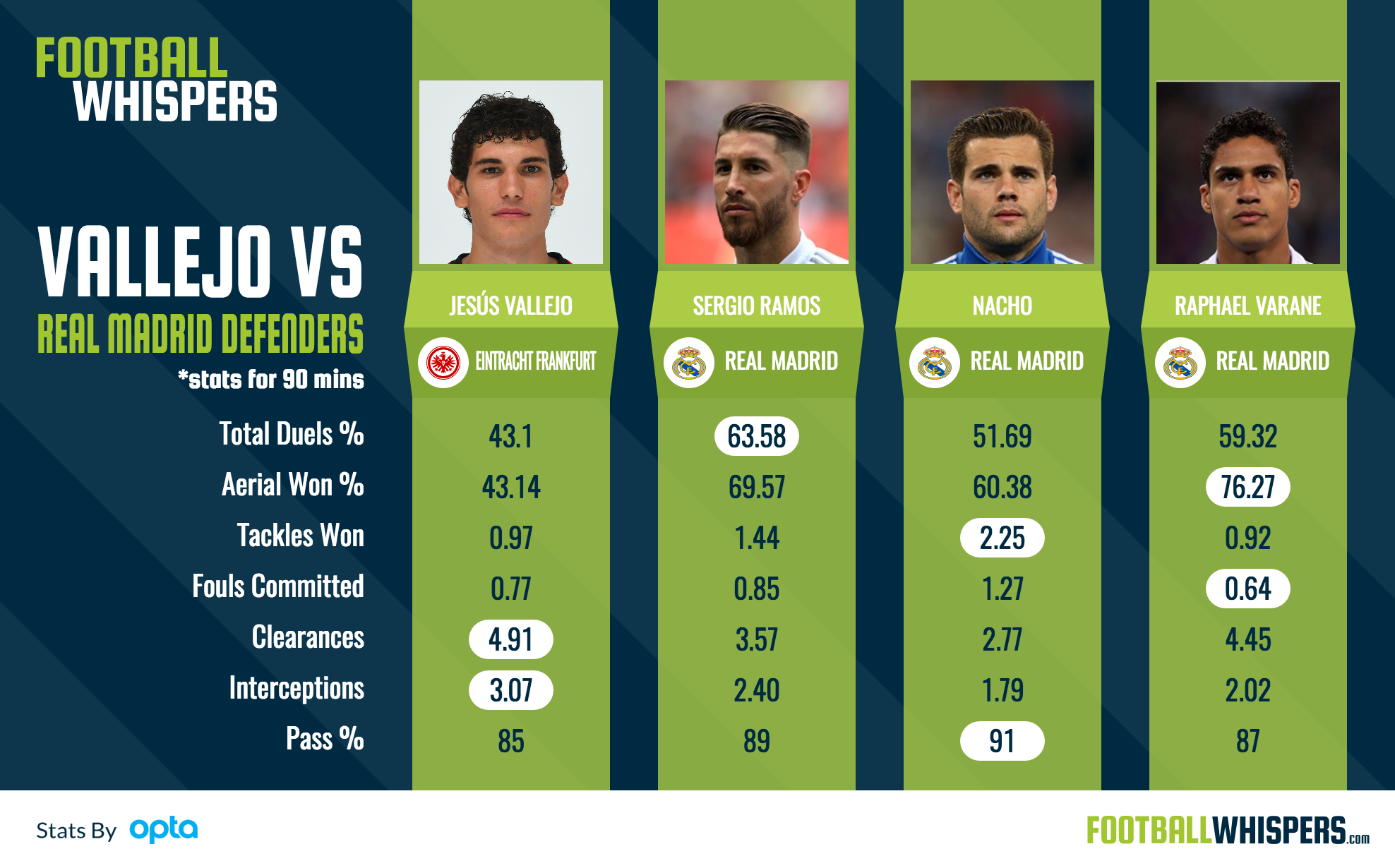 In terms of duels, he does fall short compared to those currently playing their football in the Spanish capital.

Vallejo wins less than half of his duels, just 43.1 per cent, which is someway short of Ramos, who tops the pile with 63.58 per cent of his.

And it’s the same story aerially, the on-loan defender wins just 43.14 per cent of his aerial duels, while Nacho wins an impressive 76.27 per cent of his.

Madrid are a team who are very strong in the air and if he does return to play for Zidane’s side, that is definitely an aspect of his game he would have to work on.

But at 20, he’s already achieved so much, and it would be no surprise to see him improve on that facet of his play.

He could also improve on his tackling too, he currently loses more than he wins per 90 minutes – 0.97 won compared to 1.28 lost.

But, interestingly, it’s both Varane and Vallejo who commit less fouls.

The 20-year-old also makes more clearances (4.91) and interceptions (3.07) per 90 minutes than the Real Madrid options at the moment.

But, it’s hard to properly judge that, as the style of play and league are completely different for Eintracht and Madrid.

The statistics aren’t particularly impressive compared to the other options for Los Blancos – Vallejo also has the lowest pass completion rate – but you have to remember he is only 20.

He will not be returning as first-choice – as captain, Ramos will always be on the team sheet – but probably as fourth choice centre-back, as Pepe is now.

And it will be down to the 20-year-old to prove himself, and the Real Madrid hierarchy will have to decide whether to keep hold of him or send him out again.

But it appears he has the right mentality to make it, and it seems like it’s the perfect opportunity to give a young player a chance in the first team squad, without too much of a risk.

If it works out, he could become one of the best defenders around within five or six years, and if it turns out he is not ready, he could always go back on loan and there will always be players wanting to come to Real Madrid, even if it’s mid-season.

NOW READ OUR TAKE ON ANOTHER REAL MADRID LOANEE IN GERMANY, BORJA MAYORAL