After the success that N’Golo Kante has had at both Leicester City and Chelsea, it’s no surprise that the chasing pack, including Arsenal and Tottenham Hotspur are looking to France for their next midfield dynamo.

Nice midfield Jean Michaël Seri, a known Tottenham Hotspur and Barcelona transfer target, had seemingly been close to sealing a summer move to Roma, but as reported by The Sun, the Serie A club are unwilling to match his €35million release clause, opening the door for Arsenal to rekindle their interest in the Ivorian. 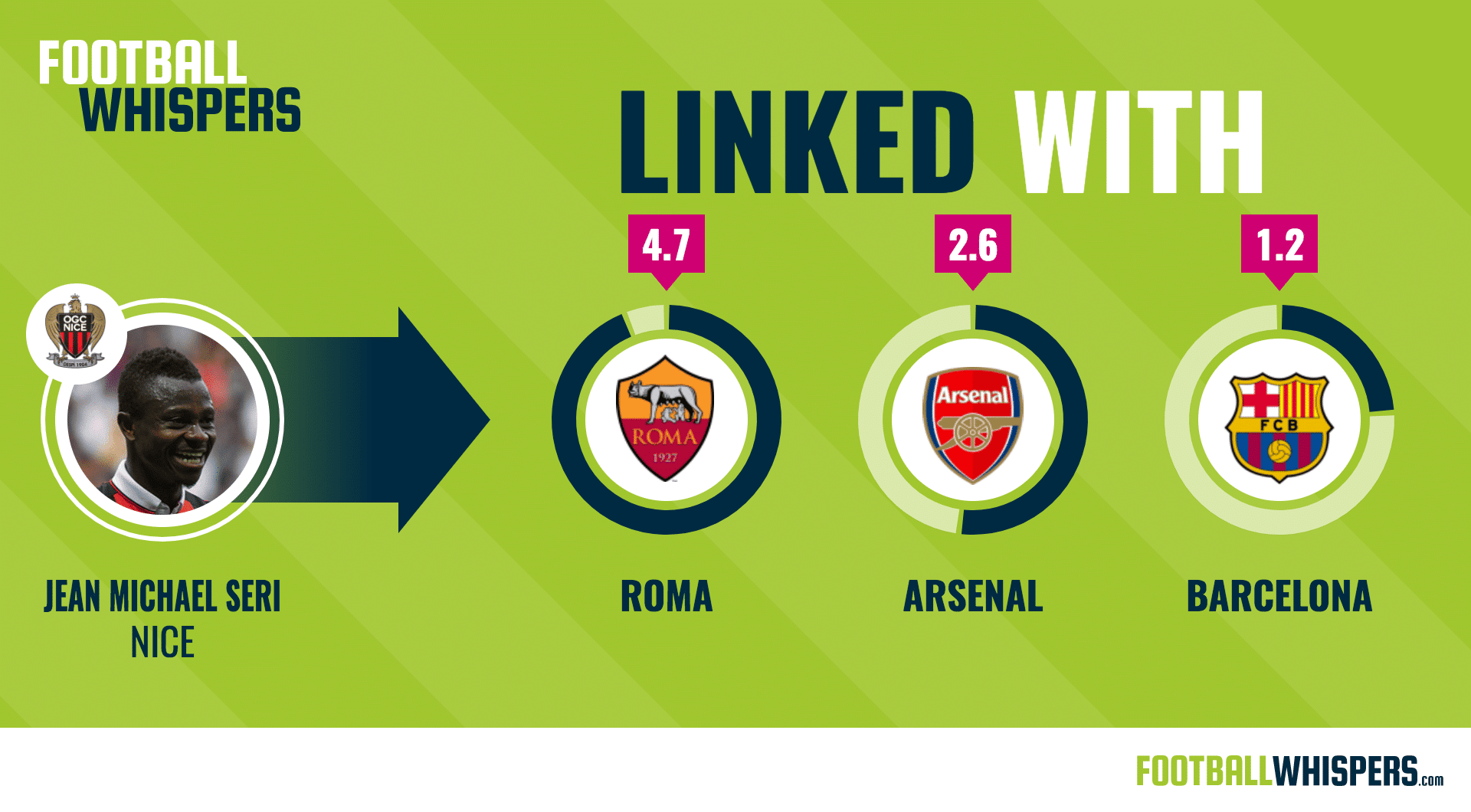 Before they set their sights on Monaco midfielder and Manchester United transfer target, Fabinho, Paris Saint-Germain were also keen on the 25-year-old.

Seri was outstanding as Nice beat the Parisians 3-1 near the end of the season, all but putting an end to their title chances. It was another standout moment in his astonishing career, which is even more amazing considering he was playing for Pacos des Ferreira just two years ago.

Brought to France by Southampton boss Claude Puel, he has slowly grown into the role. When Nampalys Mendy left for Leicester City – to replace Kante – Seri took his place in the centre of the midfield. He played every game of the Ligue 1 campaign, scoring three times and picking up six assists.

Seri is the archetypal all-round midfielder and through his small but powerful frame, acceleration in both defence and attack, plus his intelligent runs, he looks the perfect fit for a Premier League club.

Seri is more than just a battler 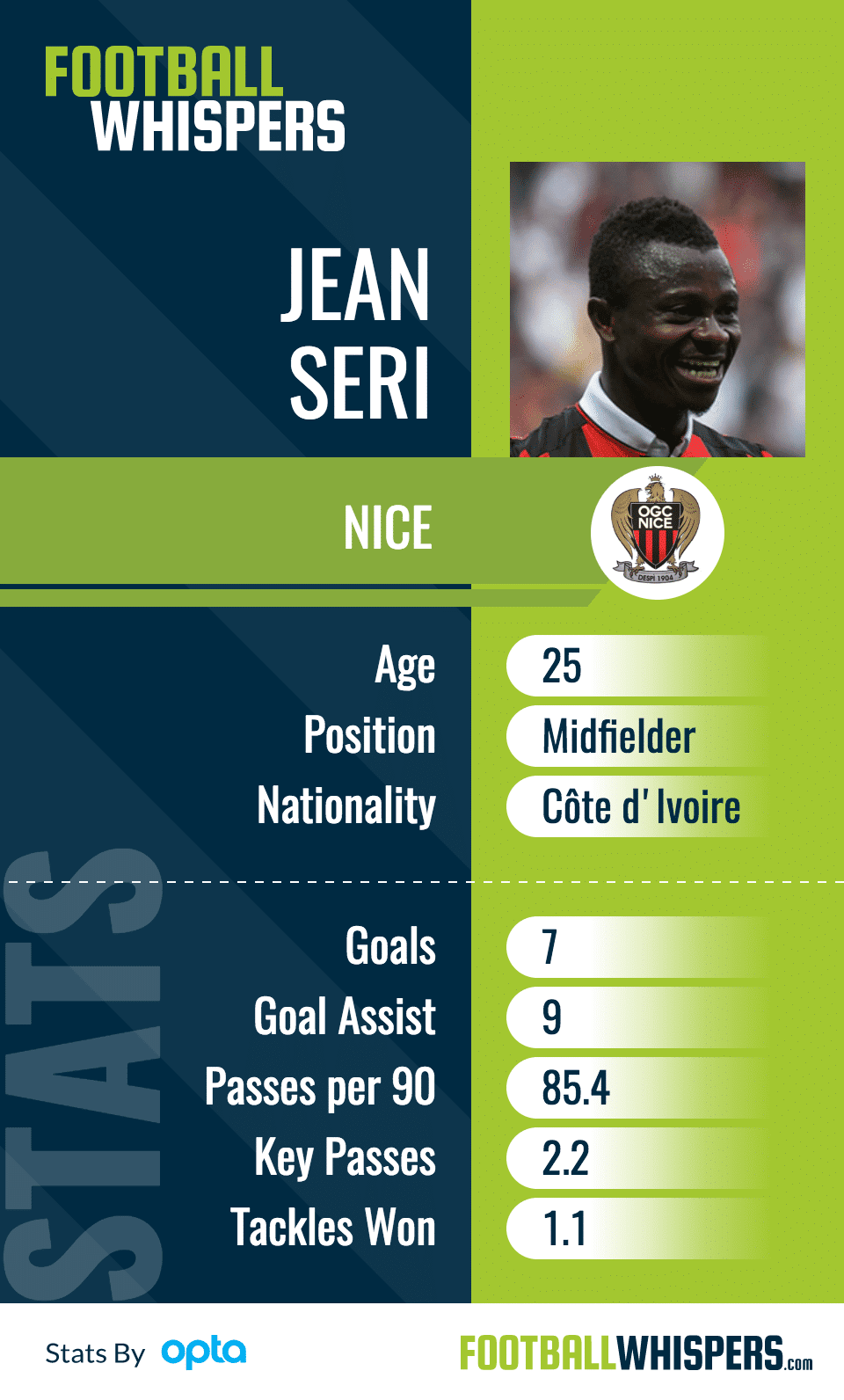 There is a touch of flair to the Ivorian’s game. Although he starts in the defensive midfield position at most games, he is always alert and willing to drive into any space that appears.

He has the speed to accelerate past defenders with the ball and as his goal tally will show, he’s not afraid to let fly from distance.

How many times have Arsenal fans begged for someone just to have a crack from outside the box?

It’s easy to label Seri as a battling defensive midfielder, but there’s so much more to his game. Playing against Toulouse, his starting position is as the deepest of the central players. 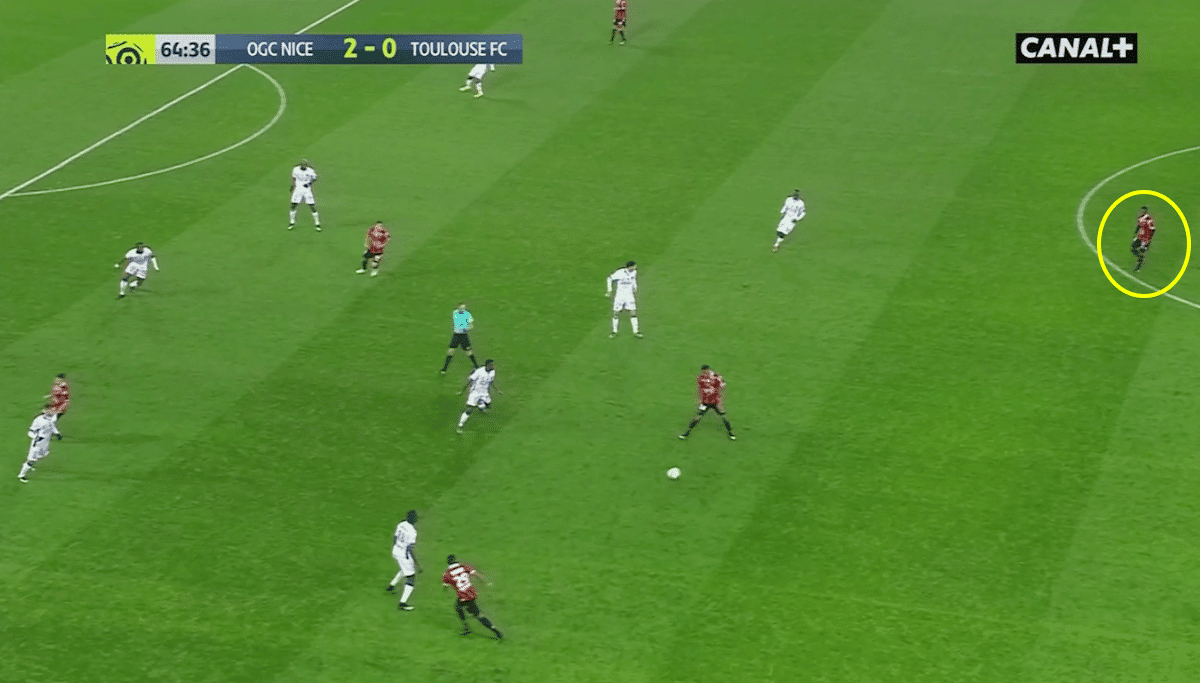 When the ball is played into Younes Belhanda, Nice’s creative force, Seri sees the gap open in front and he doesn’t need a second invitation to push forward. 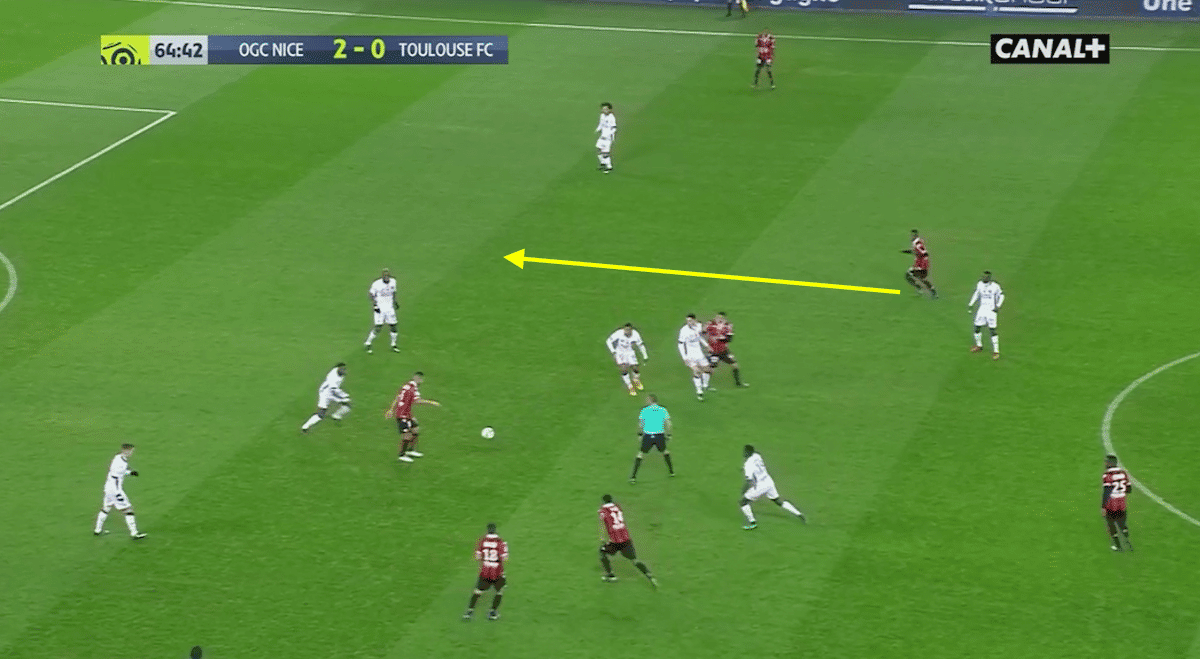 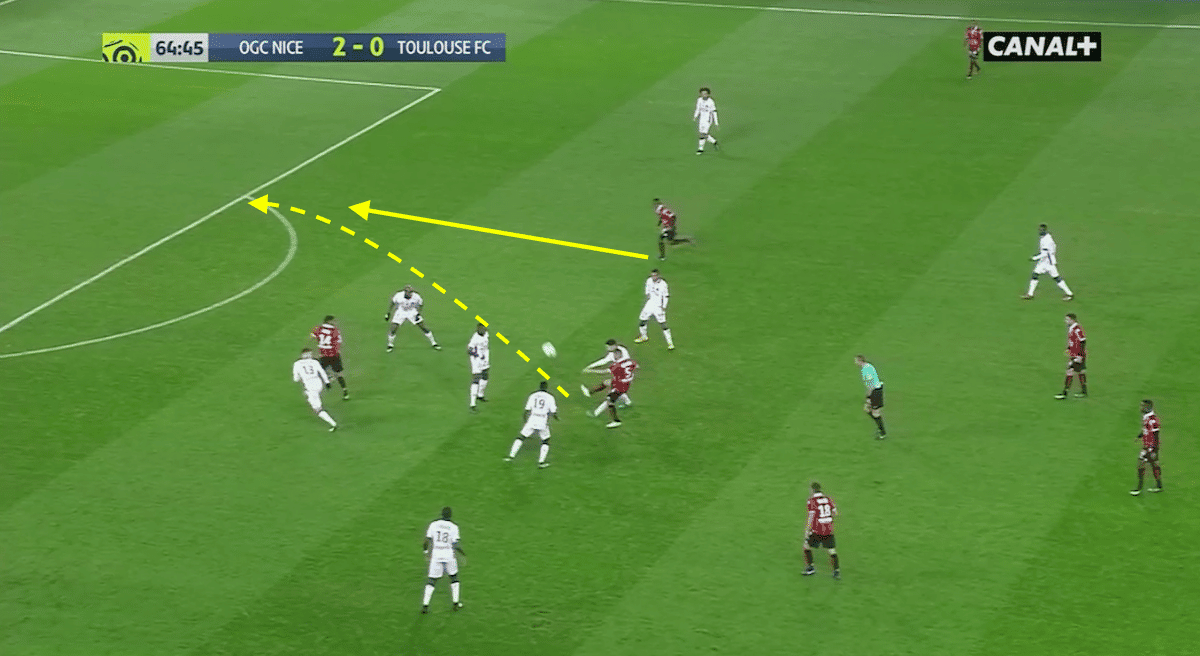 The Moroccan plays the pass, and Seri is there to gather the knock down and finish past the goalkeeper.

Within a blink of an eye he had gone from the defensive protector to the goal-scorer and that has been a feature of his game for the French side.

Never daunted by a one-on-one situation, time and time again he’s shown composure and a calmness in front of goal. Although stronger with his right, he can finish on both feet and its testament to his confidence that he attempts some of the shots he does.

Seri is a leader up and down the pitch 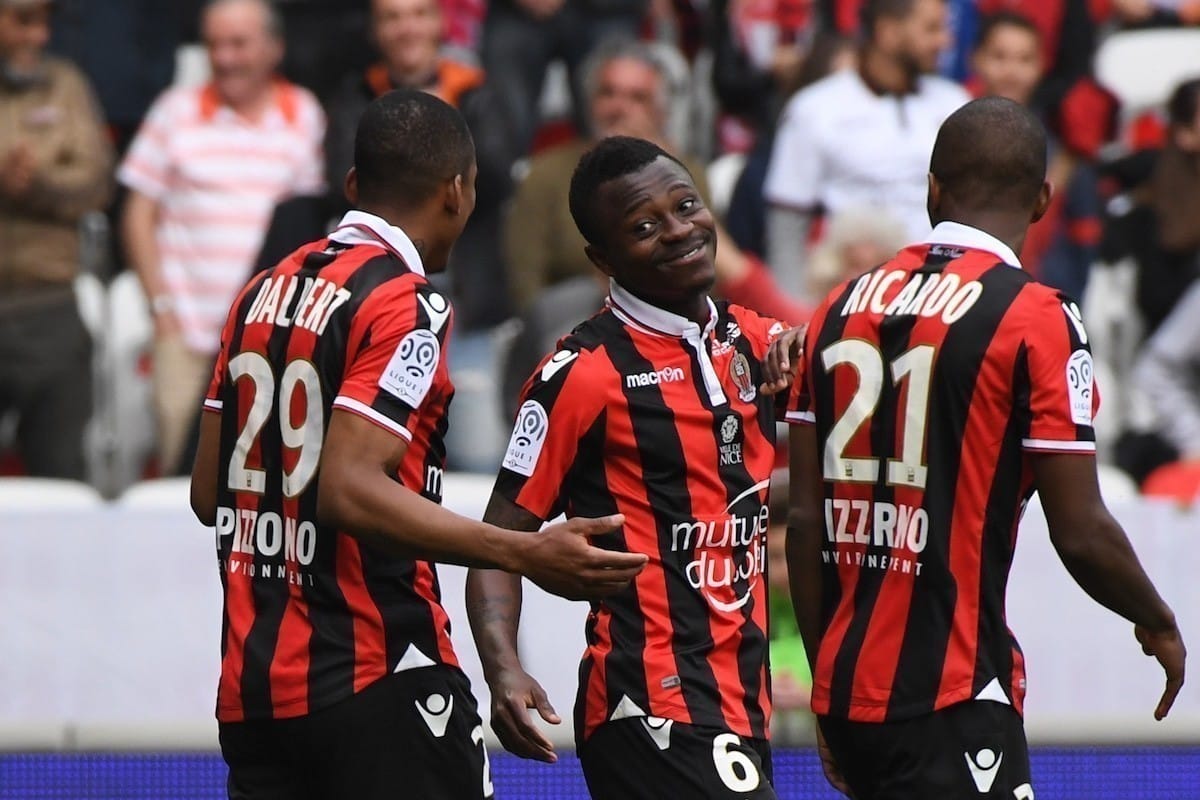 One thing that the Gunners have lacked in recent years, is a leader. Someone to set the tone, organise the team and show the rest of the players the level of effort required to succeed.

Going from an average Portuguese side to the Champions League with Nice, Seri has shown his desire to win and it’s infectious.

For someone who is regarded as a defensive midfielder, he doesn’t make the top five in any defensive category for his club.

Seri only attempts tRoma target, Maxime Gonalons is up at 6.3.

Again, the 25-year-old only makes one interception per 90. What Seri does is attempt to stay on his feet as much as possible. Similar to Kante, he is a constant menace to anyone who has the ball. He pushes, pressurises, harasses. He makes the opponent on the ball make the mistake.

Some things can’t be quantified into statistics. It’s not a tackle or an interception, it’s just pure hard work. You can’t put a number on that.

Two minutes in against Nantes earlier in the season and Seri is setting the tone. 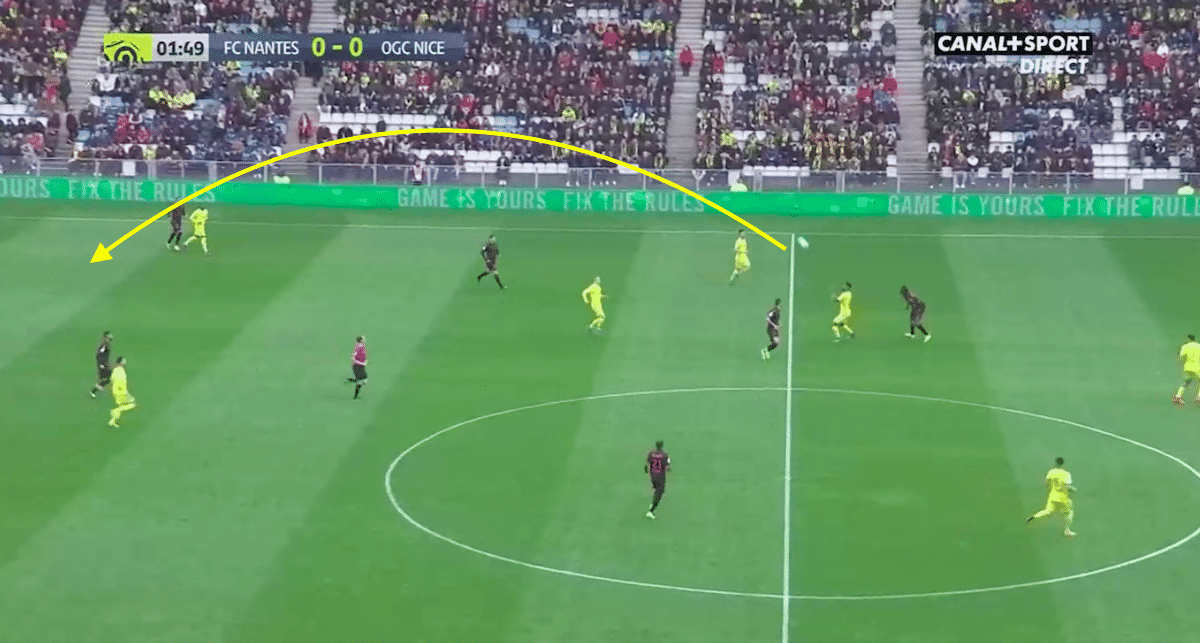 The ball is headed back towards the Nice defence and allowed the Canaris player is allowed to gain control, Seri is right against him, forcing a wayward pass backwards and once again the threat is quashed. 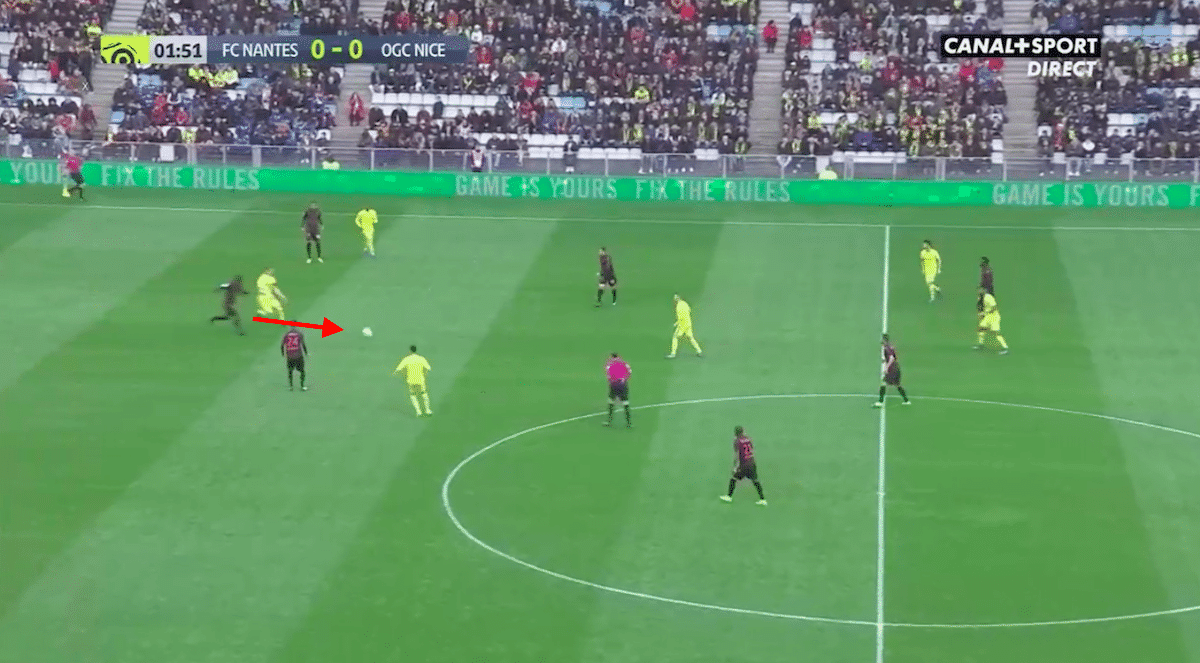 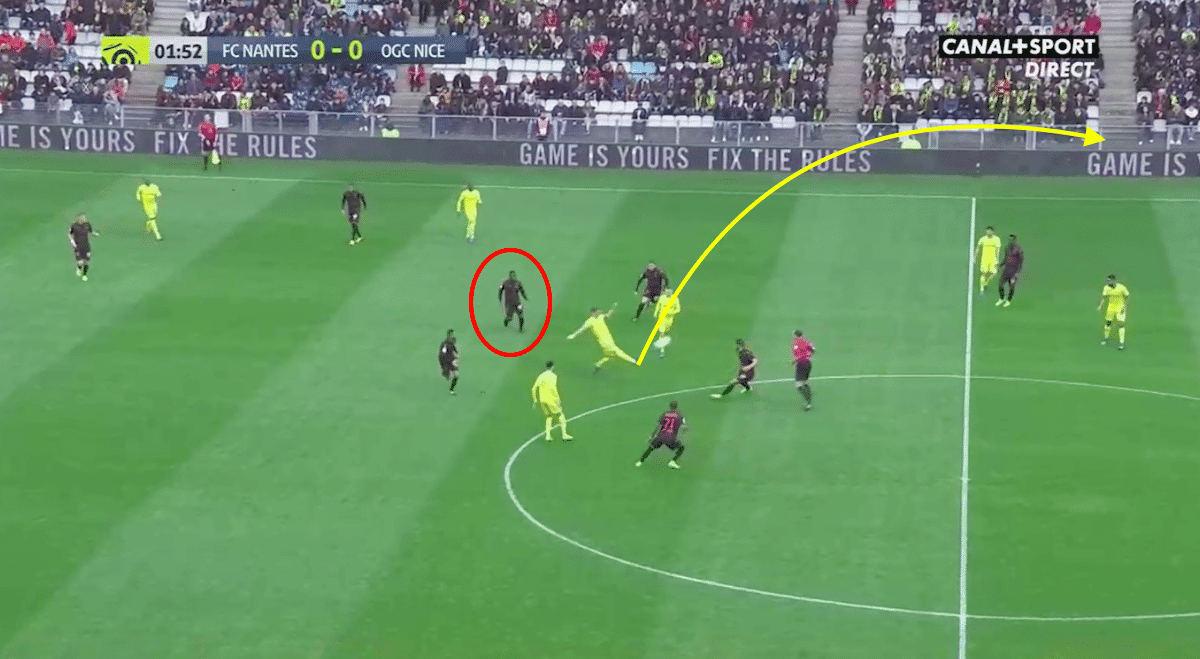 Seri is showing his team from the very start, that is the effort required at this level and they follow his example. Nice won 4-1, the midfielder picked up two assists.

Adding a passing threat from deep

Creating chances is something Seri has done extremely well this season. Building on his debut campaign, he now has a team-leading nine assists.

No one in Ligue 1 is going to match PSG’s midfield in terms of passing. Marco Verratti makes 102.2 passes per 90 and Thiago Motta leads the league with 110.9. However, Nice are a very good footballing team and under Lucien Favre, they have played with style and control.

Seri makes the third highest passes per 90 minutes in the league with 85.4 – completing 89.5 percent. The Ivorian has emerged as a very good passer of the ball and his quick thinking and quality to make decisions without a second touch has left defences for dead this season.

He’s always got his head up, and like for the goals against Rennes and Nantes, when you have strikers playing on the last shoulder, Seri can pick beautiful passes over the top, catching them off guard.

Seri has also shown himself to be an excellent option from set-pieces, his accurate crosses from the right helped set up goals for Mario Balotelli and Malang Sarr’s season opening goal against Rennes at the Allianz Riviera.

The 25-year-old is unselfish too. Against Angers, he showed everything he’s about. Bursting through their midfield with power and speed and a good touch, he’s through on goal, but spots Alassane Plea in a better position. Finding the square pass, the striker has a tap-in.

Very confident in his touch and control. He rarely takes an extra touch, even when you think he should and it allows him to pull off a pass, catching defences off guard.

This season, Seri leads Monaco in terms of key passes made with 2.3. When you compare that to Monaco’s star creators this season, Bernardo Silva 1.9 and Thomas Lemar 2.5, you get an idea of just how effective he has been in the Nice attack.

Where would he fit at Arsenal? 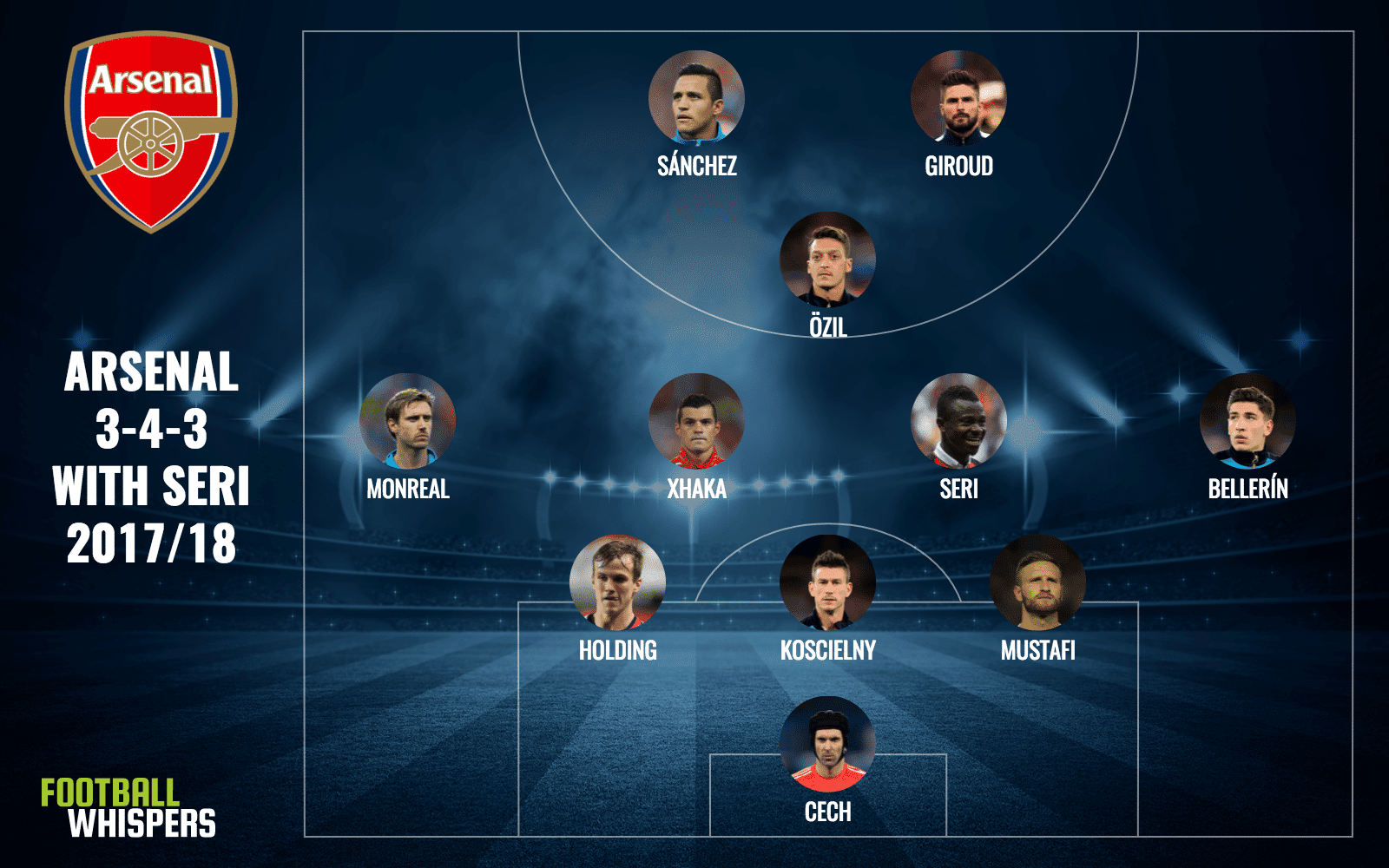 Just like Kante in the Chelsea midfield, Seri would be ideal in the middle of the four, playing the box-to-box role and adding more than Granit Xhaka or Francis Coquelin do in the final third.

In Arsène Wenger's 3-4-1-2, Seri would be perfect beside the Swiss midfielder. It’s hard to compare him to the current Arsenal players, as he is something they don’t have, but he would provide that spark that Coquelin or Mohamed Elneny don't. He’s not a defensive midfielder, he’s not a winger, he’s not a number 10. Seri is a special bit of everything and he could be a real difference maker in their team.

Nice won't budge with their €35million release clause, but if you can persuade him to play Europa League football and want someone to give your midfield another dimension, he's the perfect addition to the midfield and could be a revolutionary as Kante was for both Chelsea and Leicester City.