Marcel Brands is making a serious impression at Everton.

The Dutchman, who replaced Steve Walsh as the club's director of football in June, has already overseen an impressive recruitment drive that has brought Barcelona trio Lucas Digne, Yerry Mina and André Gomes join the club alongside Richarlison, who reunited with former Watford boss Marco Silva at Goodison Park.

In the summer of 2017, the Toffees' eye-popping £150million outlay produced mixed results. Gylfi Sigurðsson, the club's record transfer, had a slow start to life on Merseyside before finding his feet while Davy Klaassen, with just seven Premier League appearances after costing £24million from Ajax, surely has to go down as one of their biggest transfer failures in recent times.

The recruitment under Brands, however, has captured the imagination. Richarlison has eight goals in his first 14 games, Gomes looks a shrewd addition to midfield while Digne has firmly cemented his place as Silva's first-choice left-back.

According to France Football (via Get French Football News), the club are weighing up a potential £40million bid for the 21-year-old.

Although it's a considerable sum, there is a clear rationale behind Everton's thinking. They currently sit seventh in the Premier League table, behind the established top six, but only two points behind Manchester United. After 16 games, they have 24 points with a goal difference of +4, a clear improvement on where they stood at the same point last season (tenth with 19 points and a goal difference of -9).

While there are discernible signs of progression under Silva, the feeling is that breaking into the top six requires a strengthening of the strikeforce.

Examining Silva's current options up top proves that Richarlison needs support. Cenk Tosun, a £27million signing from Besiktas at the start of 2018, has just two goals from 609 Premier League minutes this season.

With Oumar Niasse seemingly surplus to requirements – the Senegal international has played just 52 minutes of Premier League football this season – and Ademola Lookman continually linked with a move back to RB Leipzig, it leaves Silva short on natural finishers, especially with some fans feeling as though Richarlison is best deployed as a left winger.

But if Lookman does return to Leipzig, Everton may receive a promising forward in return.

A product of Paris Saint-Germain‘s youth academy, Augustin featured sporadically under Laurent Blanc during the 2015/16 season, making only 13 Ligue 1 appearances, four of which were starts.

The youngster responded in the most emphatic way possible, however, scoring six times to help France clinch the European Under-19 Championship title in Germany in the summer of 2016.

At that point, Augustin seemed to have the world at his feet but even an unmissable showing in Les Petits Bleus' triumphant tournament campaign wasn't enough to establish him in the first-team at the Parc des Princes.

Unai Emery replaced Blanc in the dugout but the Spaniard's arrival failed to improve Augustin's situation. While his France U19 teammate Mbappé took European football by storm as part of Leonardo Jardim's Ligue 1-winning Monaco side, Augustin spent much of the 2016 term on the bench.

It brought him to RB Leipzig after he'd attracted an admirer in the Bundesliga club's sporting director Ralf Rangnick. And “JK” found opportunities at PSG frustratingly elusive, the Red Bull Arena proved a much happier home.

Again, with Liverpool transfer target Timo Werner and Marcel Sabitzer already in the Leipzig strikeforce, Augustin had to make an impact when given the chance, but he was up to challenge.

Making 39 appearances in all competitions, he notched 12 goals and contributed six assists. This season, however, Rangnick hasn't always found a place for the young Frenchman in his 4-4-2 system, with Werner and Yussuf Poulsen very much the veteran coach's first-choice partnership in attack.

Augustin has started all five of the club's Europa League games but he may feel aggrieved that he is called upon only when Rangnick rests his regular Bundesliga starters for the second-string European competition.

Augustin is quick, direct and already an accomplished finisher. An explosive attacking talent, there is a feeling that, when he gets the ball at his feet, something is about to happen, that he is about to quicken the tempo or about to leave a defender in his wake.

He doesn't possess Mbappé's blistering turn of pace – then again, not many do – but Augustin has enough acceleration to pull defenders out of position, to run beyond the back-line and to prove a genuine asset on the counter-attack.

He possesses the ability to come alive and produce something spectacular in the penalty area, too.

Take his goal against Stuttgart as an example. As Marcel Halstenberg crosses from the left, Augustin spots the space on the right-hand side. 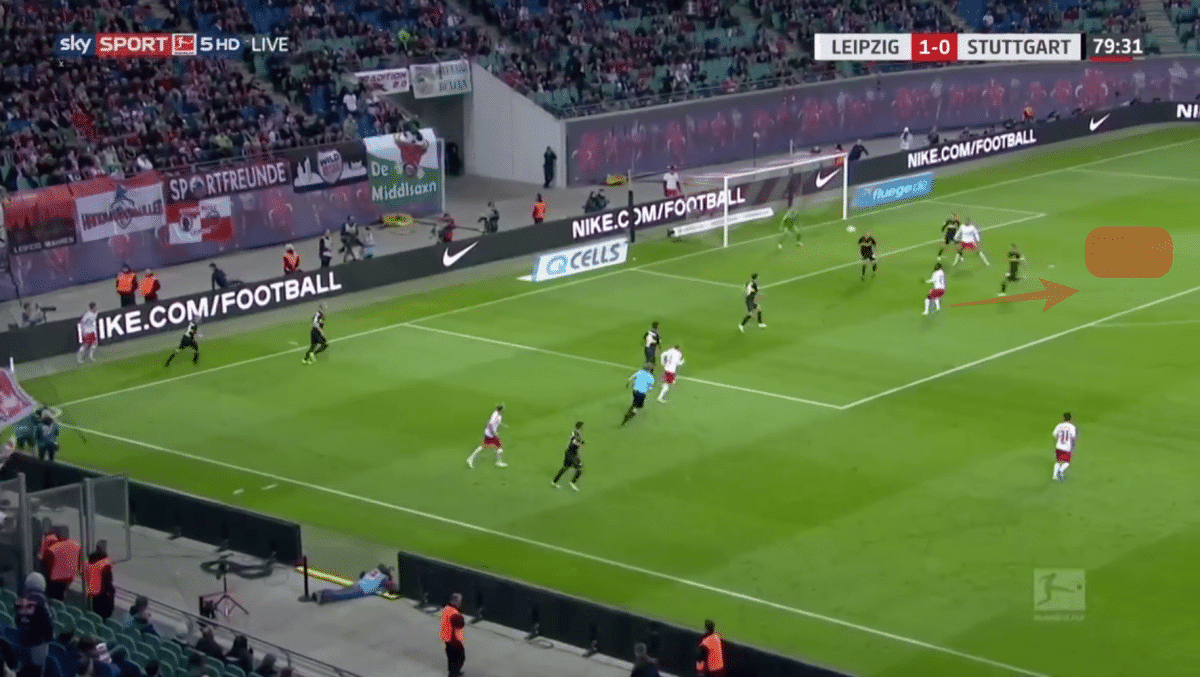 Taking the ball on the chest, the 21-year-old eludes the defender and curls his shot into the bottom corner.

It was a telling snapshot of what he is capable of. Although there are five Stuttgart players in the area as the ball sails across, Augustin still conjures up a chance thanks to his awareness of space and the ability to drop the shoulder. 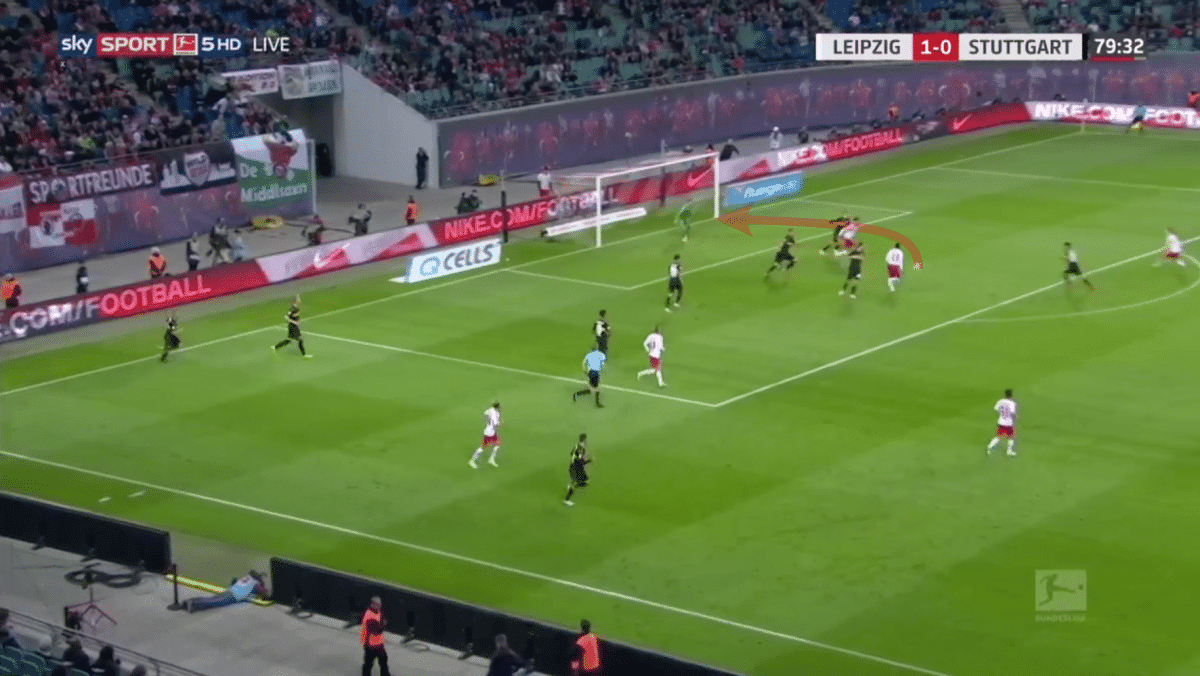 These qualities, combined with a natural poacher's instinct, makes him a constant menace for defenders. Technically and physically impressive, he remains a player of considerable promise despite an often frustrating start to his club career.

At just 5ft 8in, Augustin is not the most imposing player when it comes to aerial duels. In fact, he has won just 21 per cent of them in the Bundesliga this season.

There has been some scrutiny on his attitude recently, too, after he rejected a call-up to the France U21 side by texting manager Sylvain Ripoll the day before he was due to join up with the squad complaining of muscle fatigue.

Considering that Augustin has been knocking on the door of a senior call-up, it wasn't the smartest move on his part and perhaps reflects a young player who is still learning to mature. 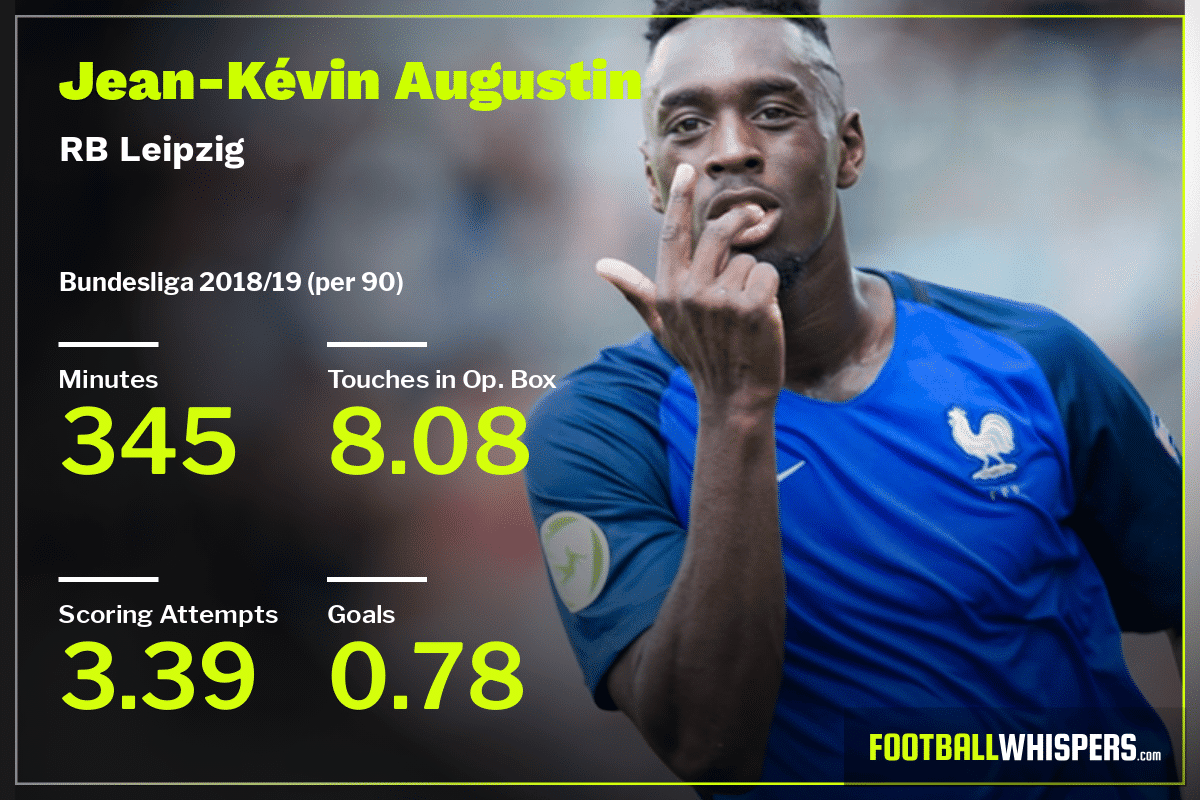 If France Football's report is to be believed, Goodison Park will be the Frenchman's next destination. While £40million is a considerable outlay, Everton were willing to spend that sum on Richarlison who, after a bright start at Watford, had suffered a dramatic loss of form.

The Brazilian has largely justified the club's expenditure already and, with growing trust in the recruitment, Augustin would be an exciting addition.

In Silva's 4-2-3-1, the Frenchman would be able to play the central role up top but has the experience of wing-play to potentially alternate with Richarlison, adding a sense of fluidity to the Toffees frontline.

He is not the finished article but, then again, neither is Richarlison. If there is a chance for Everton, they should take it while it's there, especially if they can raise funds by selling Niasse and Tosun.

Of course, RB Leipzig may enquire about Lookman. It would be difficult to envisage the Bundesliga side not asking after the 21-year-old considering the impression he made at the Red Bull Arena last season.

Understandably, Everton would be reluctant to lose one of their most promising prospects but, even if Lookman did depart, Augustin would be a replacement worth getting excited about, someone who could flourish as a part of Silva's attacking vision.