Were it not for the Pozzo family Watford Football Club may not exist. Well, certainly not in its current guise.

There would be no Premier League football. No Sir Elton John Stand. No Javi Gracia or the array of coaches who've come before him. There would be Roberto Pereyra. No Abdoulaye Doucouré. No Troy Deeney in all likelihood. There would be no sensory room at Vicarage Road. No cryotherapy chamber at the training ground. And, of course, no FA Cup semi-final.

When the Pozzos bought Watford in the summer of 2012, it wasn't a simple takeover. It was an arduous process which was, through no fault of their own, on the verge of collapse on more than one occasion.

They persevered, though. The Italian family knew what Watford, as a club, was but crucially knew what it could become. And over the past six-and-half years, their vision has become a reality.

“It’s going to be nice to see how this club becomes more and more competitive, where I hope the people who support this club can take pride in how we will be able to perform at a higher level,” Gino Pozzo explained in an interview with the Watford Observer in November 2012.

“I have seen it before where a smaller club challenges a bigger club, with a much bigger budget, and you have a different soul. In the end, it comes down to 11 versus 11.”

Watford's soul has always been a little different from the majority of clubs, Graham Taylor saw to that. Taylor was a family man, a kindhearted man. And in two separate spells at the helm, he embedded values within the club that have lasted to this day.

On the pitch, he also guided the Hornets to their first and only FA Cup final in 1984, a game which they lost to Everton. This afternoon at Wembley, Gracia will look to emulate Taylor when Watford take on Wolverhampton Wanderers.

The Spaniard has been in charge at Vicarage Road almost 15 months, the second-longest tenure of any Watford head coach under the Pozzos. He was appointed to little fanfare, the focus instead on Marco Silva's betrayal. Yet Gracia has proven exactly what the club needed, a man whose beliefs echo that of the club's legendary manager.

“Our values come from our family, our parents, the people around you,” Gracia explained in an interview with The Independent last month. “All of us have principles. I prefer to be loyal with the people around me. The most important thing for me is that people trust you, that they are happy with you.”

That trust between manager – or head coach – and player is vital. Lose that and results inevitably suffer, as Silva discovered during his doomed tenure. Gracia, however, is a good man-manager. He is firm but affable, his own man but prepared to take and act on counsel from his backroom staff. 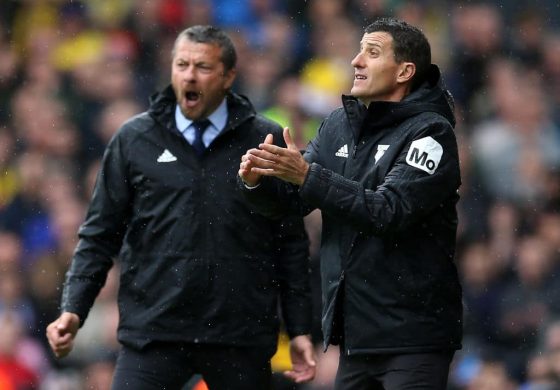 He is a smart tactician, too. Watford have tended to line up in a 4-4-2 shape throughout the campaign but it's a nuanced structure. In possession, the wide midfielders, predominantly Pereyra and Will Hughes, will push forward and the formation resembles 4-2-2-2. Without the ball, that duo tuck in to make a disciplined midfield quartet and one of the two strikers also drop back to defend.

It's a system that enabled Watford to defeat Wolves 2-0 at Molineux earlier in the campaign. There are likely to be a few changes to that side at Wembley – Deeney was absent through injury that day – and it will be interesting to see if Gracia sticks with ‘cup goalkeeper' Heurelho Gomes at Wembley or reverts to No.1 stopper Ben Foster.

You suspect the Brazilian will be given the nod. Gracia is fiercely loyal to his players – he quit Almeria in 2013 a week after guiding the club to La Liga when he learned the plan was to overhaul the squad – and values Gomes' influence within the dressing room.

“It's something very special for me to have a keeper like Gomes with his attitude every day helping the team,” he said in February. “He’s ready to help the team every day and when I decide he has to play, he shows his quality.

“I’m very lucky to have the keepers I have, not only as players but as people as well because they are very good professionals.”

Gomes arrived at Watford two seasons after the Pozzo family and has played a vital role in helping the club establish itself in the Premier League. He was an experienced head during the 2014/15 campaign, a season which ended in promotion but saw the Hornets, for differing reasons, overseen by four different head coaches.

The former Tottenham goalkeeper has also been a valuable soundboard for club captain Deeney, the one constant at Vicarage Road through the Italian family's ownership. Players have come and gone. Coaches have come and gone. Yet the striker has remained, a link between the pitch and the stands.

Deeney has lived the highs of the Pozzo era but has also been stung by the lows, two of which have come at Wembley. There was the Championship play-off final defeat to Crystal Palace in 2013 and an FA Cup semi-final loss to the same opposition three years later.

Yet the Watford of 2019 is a different beast. The angst of Premier League survival no longer exists at Vicarage Road, it's a given. European ambitions and cup triumphs now fill the minds of Hornets supporters.

This has all been achieved on a budget, too. Watford have never spent beyond their means under the Pozzos, the family never risking the future of the club in the same fashion of regimes past.

They are everything a fanbase wants from their owners; smart, passionate and determined. Gracia is the same, too. And together they are making Watford fans's dreams a reality.