Liverpool are desperate to solve their goalkeeper problem. Lorus Karius took time to displace an unconvincing Simon Mignolet in the starting line-up and, just when he’d managed it, the Champions League final happened.

That Jürgen Klopp is in for another goalkeeper is probably less of a direct response to that performance and more it spurring them into action that was always on their to-do list.

Now it seems that Barcelona’s Jasper Cillessen is the latest Liverpool transfer target.

Who is Jasper Cillessen?

Cillesen is Barcelona’s back-up goalkeeper, making just two league appearances in his two-year stint at the club. If you’ve watched him play in the last few years then, it’s more likely to have been in the colours of Ajax, where he was from 2011 to 2016, or the Netherlands.

He was their first-choice keeper at the 2014 World Cup, replaced by Tim Krul in extra time for the penalty shoot-out against Costa Rica. Who knows whether Cillessen would have pulled it out of the bag, but he was expecting that he would need to – he didn’t know about Louis van Gaal’s plan until it happened.

He moved to Ajax from NEC Nijmagen, where he’d spent much of his youth career, in 2011 and become De Godenzonen's first choice in 2013/14, winning three Eredivisie titles between 2012 and 2014 before following in the footsteps of many Dutch players by moving to Barça.

What are Jasper Cillessen’s main strengths?

The words ‘good feet for a big man’ don’t do justice to Cillessen’s on-ball ability.

When he signed for Barcelona, the club website boasted that he was a goalkeeper who “possesses qualities that fit in perfectly with the club's philosophy”, and they were right.

Stick Andrés Iniesta in a pair of goalie gloves, standing in the six-yard box, and he’d struggle to hit some of the passes that Cillessen makes.

Below is Cillessen for the Netherlands, just tapping the ball forwards to roll ever so slightly out of his 18-yard box. 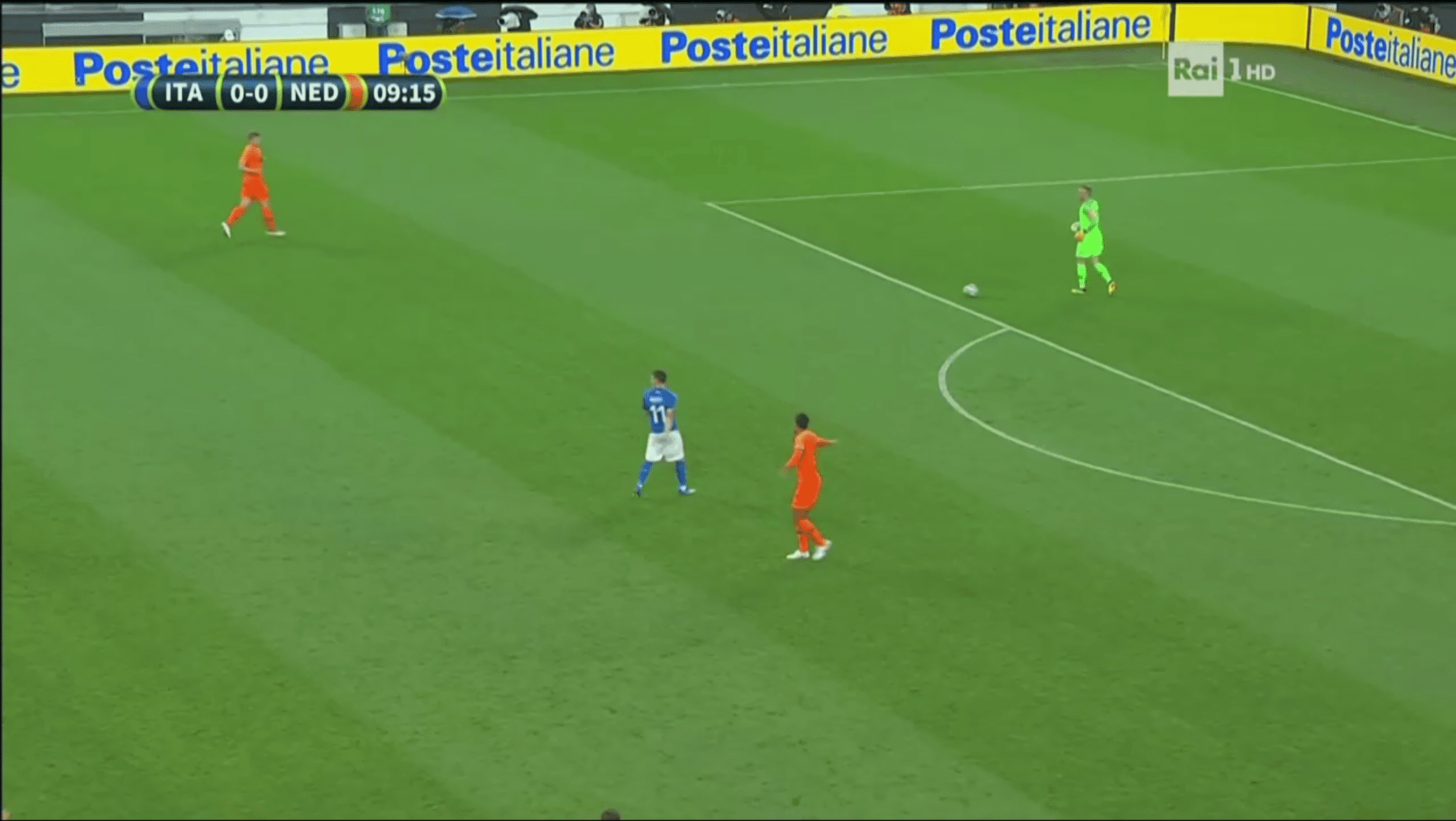 And below is where the very nicely arced ball ends up, perfectly weighted and flighted for the player to bring down easily. 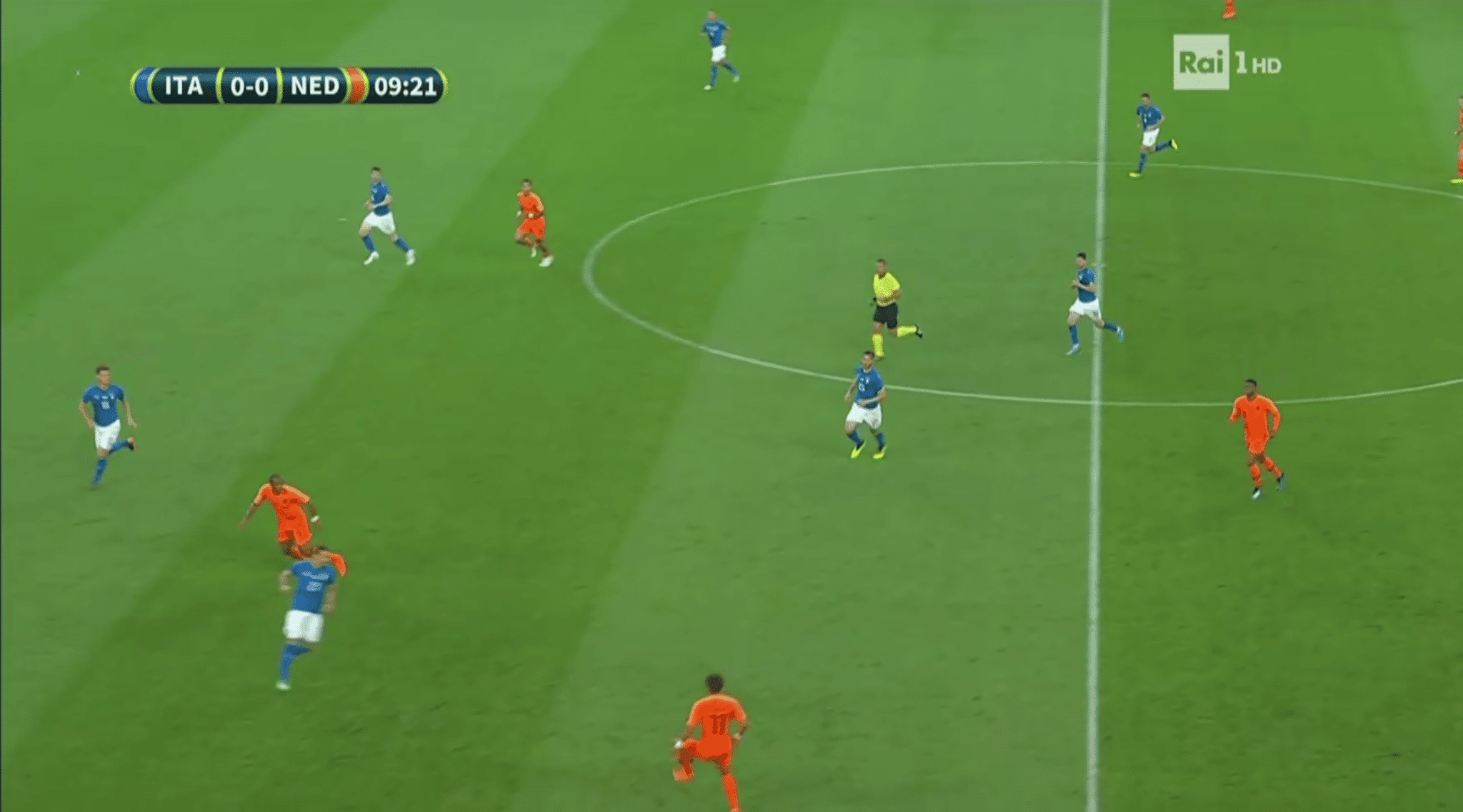 While it's hard to read too much into his numbers given he played so infrequently, Cillessen picked up nine outings for 810 minutes in last season's Copa del Rey and his average of 15.88 accurate passes per 90 was the the eighth-most in the competition.

What are Jasper Cillessen’s main weaknesses?

There were theories, after the Krul substitution in 2014, that Cillessen is abnormally bad at saving penalties. At the time, he had faced 18 and saved none.

An article shortly after argued the statistical case in defence of Cillessen, that the goalkeeper could still be an average penalty-saver and his record just a quirk of of fate. Since then, he’s faced nine – six have been scored, three have been missed (in one way or another).

Rumours of Cillessen’s spot-kick deficiencies were probably over-played, then, but he’s surely not a good penalty goalkeeper with that record.

Cillessen – and Liverpool fans may well wince here – is also not the best with his hands. More than one online ‘highlight’ reel features saves that come after he has spilled an initial shot.

Credit to him for having the reflexes to make the second save, but the fact that the initial efforts are spilled or parried into danger is a worry. 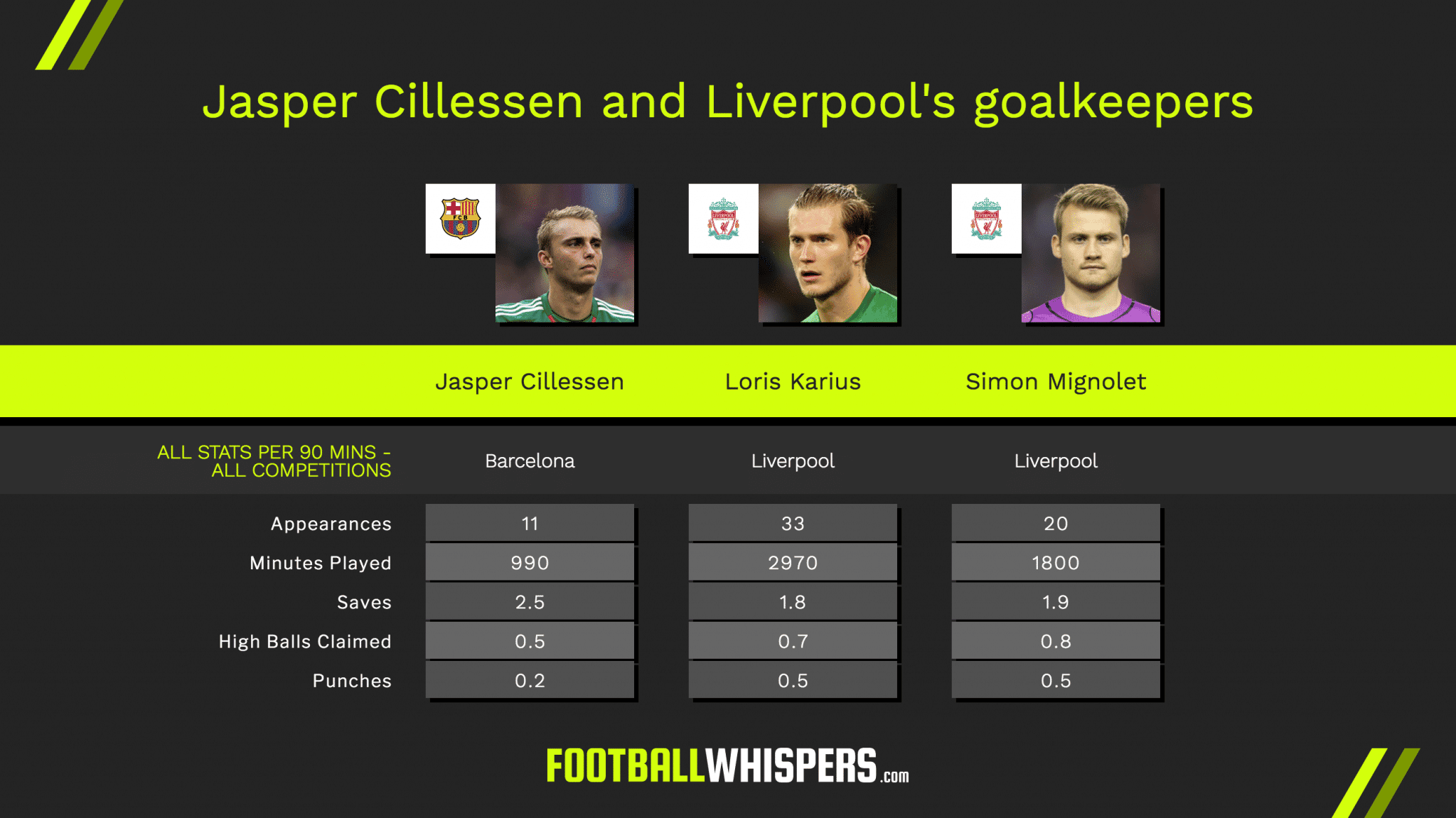 How much would Jasper Cillessen cost?

However, in the past few weeks it has been reported that Barça have slashed the price in half to €30million, a much more reasonable fee and one which would put him at the cheaper end of the price range among the keepers the Reds are reportedly keen on.

Should Liverpool buy him?

With Manchester City having used Ederson’s ball-playing ability to make goal kicks such a danger, Liverpool could well be planning to follow suit. Mohamed Salah and Sadio Mané's speed up the pitch could make Liverpool a real danger to opponents’ back-lines at any stage of the match.

On the actual goalkeeping front, Cillessen may not be the significant upgrade that the club are looking for. He may well be better than Karius and Mignolet – but then again, he might not be. It’s not a certainty.

But the marginal improvement that he might bring along with the ball-playing ability that he definitely brings, might make a cut-price deal worth it.