It’s been a strange three years for Jasper Cillessen. The Dutch goalkeeper, who joined Barcelona from Ajax in 2016, has managed a measly total of just 28 appearances in all competitions for the club.

Now, understandably, he is fed up. “After this season I will go on vacation first and then I hope to find a new club to get more playing time,” Cillessen told Ziggo Sport.

Cillessen’s intention when he made the switch to the Blaugrana was clearly not to spend most of his time warming the bench. He had excelled with Ajax, establishing himself as a regular with the Dutch national team. When Claudio Bravo left Barcelona to join Manchester City, no time was wasted in securing his replacement.

The expectation was that Cillessen would, alongside Marc-André ter Stegen, be rotated, as Real Madrid have done this season with Thibaut Courtois and Keylor Navas.

Instead, Ernesto Valverde has always preferred Ter Stegen. That is understandable, given the German’s exceptional form over the last three seasons. Cillessen, though, will feel he could have been given more game time in cup competitions.

The 30-year-old has made just five appearances this term: four in the Copa del Rey and one in the Champions League. It is not enough for a goalkeeper who is in his prime years, a goalkeeper who is considered the Netherlands’ first choice even when he is not playing at club level.

“My idea is to have two good goalkeepers, the two we have now, Marc and Jasper,” Valverde said back in August. “It's true that [Cillessen's] not played as much as Marc but that's how being a goalkeeper can be.

“He knows what I think. I don't think he will be hard work if he stays, we are very happy with his professionalism and his attitude. We hope he stays with us and is happy.”

In the end, though, Cillessen's patience has run out. His move to Barcelona was understandable, a reward for six impressive years at Ajax. But it has not gone to plan. He has made just two La Liga appearances in three years, time that could have been spent as a regular elsewhere. 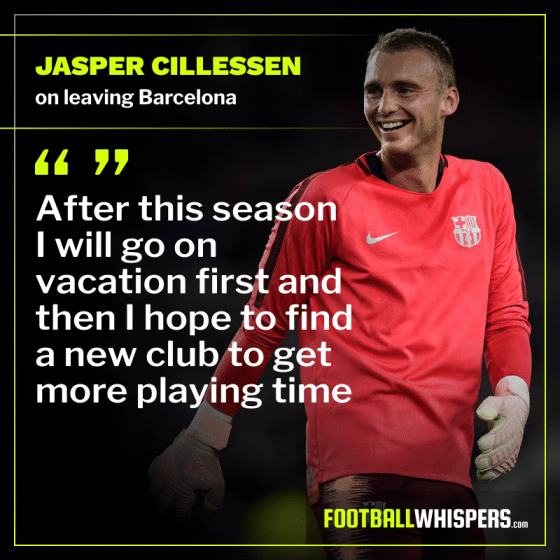 Cillessen will have learned from the experience, though. He has deputised for one of Europe’s best goalkeepers, remained professional and disciplined on the sidelines. And when he has been given the opportunity to play, he has impressed. Cillessen was excellent in Barcelona’s 6-1 Copa del Rey victory over Sevilla earlier in the season, saving a penalty with his side 1-0 up.

“We have two great goalkeepers and Jasper is first class, we have the great fortune to have him,” Valverde said after that game. “A lot of the success we are having lately is for our goalkeepers.”

There will certainly be no shortage of suitors for Cillessen, who was rumoured to be a target of several clubs last summer. Barcelona’s insistence that his release clause of €60million must be met appeared to deter them, though.

The club are unlikely to command such a hefty fee this summer, particularly if Cillessen is determined to leave. They could still make a considerable profit – having signed him for just €13million – but the Dutchman is likely to be an affordable target for any potential suitors.

The question now, then, is where Cillessen is likely to end up next season. A move to the Premier League might be exactly what he needs, although clubs at the top of the division are unlikely to be searching for a new No.1.

Both Arsenal and Liverpool have been linked with Cillessen. The Gunners will lose Petr Čech and David Ospina at the end of the season, while Liverpool are likely to let Simon Mignolet and Loris Karius leave the club. The problem for Cillessen is that both teams have established first-choice goalkeepers in Bernd Leno and Alisson.

Tottenham Hotspur could be an option, given Hugo Lloris' inconsistent form. Yet Mauricio Pochettino is fiercely loyal and is unlikely to give up on the French stopper, who is also club captain.

If the former Ajax man does intend to play more regularly, he may be forced to take a step down. It is important that he gets his next move right, that he avoids a repeat of the situation at Barcelona.

Cillessen is good enough to be a reliable and consistent No.1. At which club, though, remains to be seen.