There are certain players who seem to be linked with Premier League moves forever before finally making the step up. Jarrod Bowen is one of those.

The Hull City winger has been – assuming you believe the reports – a target for Southampton, Aston Villa, Newcastle United and Crystal Palace since last summer. Doubtless, we've not heard of every interested party.

On Thursday evening, Bowen looked set to move to Selhurst Park after the Eagles agreed on a fee with Hull at long last. But, by Friday morning, Bowen's destination had changed with West Ham United slapping in a £20million offer. The attacker is on his way to the capital to undergo a medical, per Sky Sports News.

The Hammers' business in recent years hasn't tended to be particularly smart or successful. So you would be forgiven for thinking that a relatively late, out-the-blue offer for Bowen could have the potential to backfire. On the face of it, though, this looks like a deal which could buck that trend.

Despite spending a club-record £45million on Sebástien Haller in the summer, West Ham have struggled for goals – Haller has just six since moving from Eintracht Frankfurt. Bowen should fix that. The 23-year-old has scored 54 in the last two-and-a-half seasons with the Tigers. We'll remind you again, he's a winger.

This season the former Hereford United youngster has already found the back of the net 16 times against an expected goals (xG) total of 12.99. Only two Championship players (Aleksandar Mitrović and Ollie Watkins) can top that figure. They are both centre-forwards.

Predominantly left-footed, Bowen can score all types of goals. He's no stranger to  Arjen Robben's trademark cut in from the right and lash home, but he's also got long rangers, poacher's efforts and headers in his locker to boot. He has the goalscoring knack of a centre-forward but the pace and trickery of a traditional winger to boot. 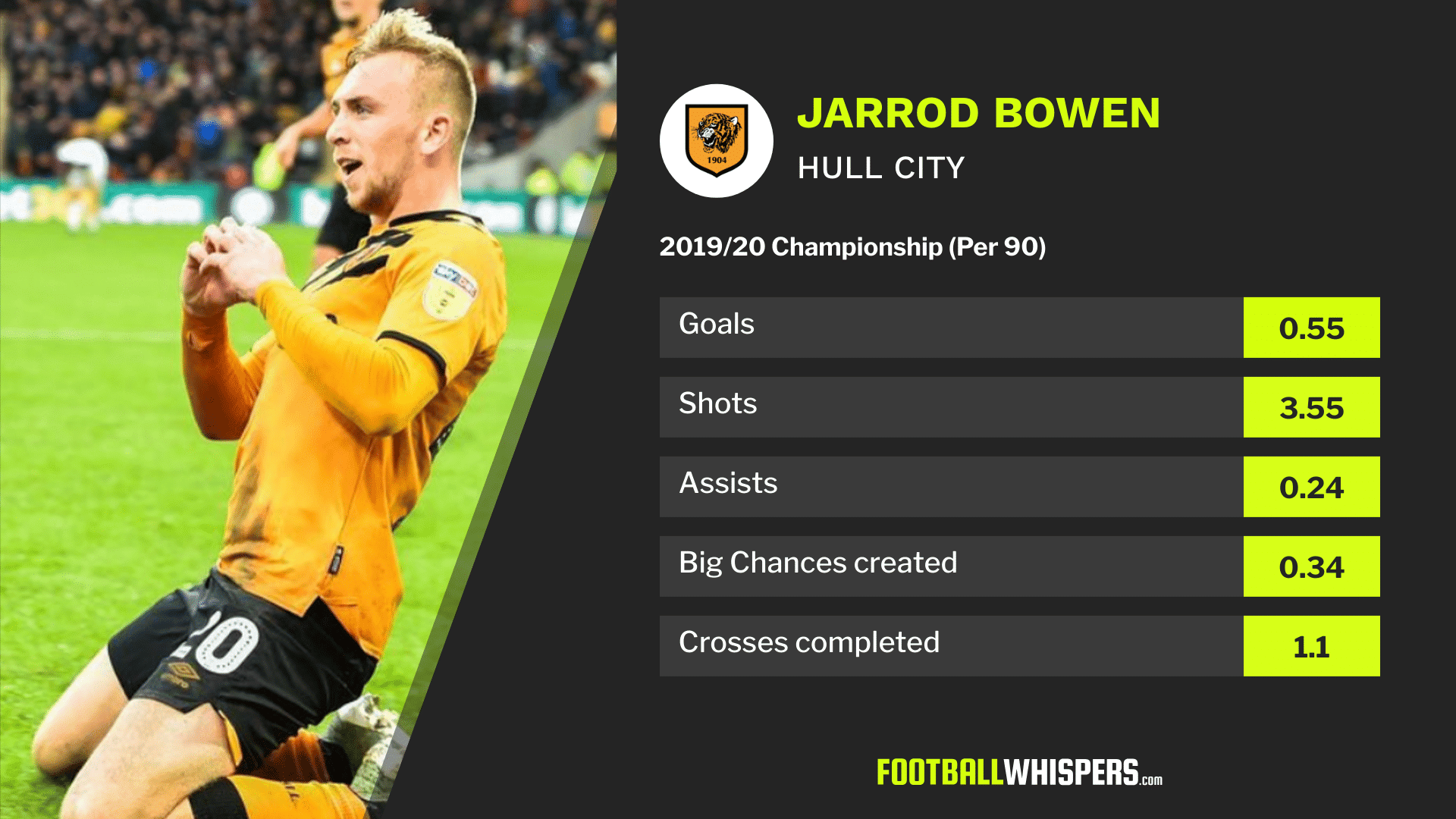 His 1.75 completed dribbles (per 90) rank him 13th among Championship forwards while he is sixth for completed crosses with an impressive return of 1.1 (per 90), confirm there is an end product to his trickery. Seven assists and ten Big Chances created only underline that.

Although they've spent big beefing up their attack in recent seasons – only last summer they splashed £24million Pablo Fornals, adding to Andriy Yarmolenko, Michail Antonio, Robert Snodgrass and Manuel Lanzini – one thing David Moyes is lacking in his attacking arsenal in pace.

Bowen will bring plenty of that with him to the London Stadium too. With 0.44 fast breaks (per 90), the tricky forward ranks second in the Championship.

After such a long wait for his big move, this deal has happened quickly, but good things come to those who wait.