After Manchester United‘s 0-0 draw away to Southampton on Wednesday, José Mourinho expressed his confidence in David de Gea remaining at the club beyond the summer, despite widespread reports claiming the Spaniard is all set to join Real Madrid.

With back-up goalkeeper Sergio Romero starting against the Saints and already earmarked to play in next week's Europa League final, while 20-year-old Joel Pereira is set to make his debut between the sticks against Crystal Palace on Sunday, Mourinho was asked whether de Gea had already played his last game for United.

“David? I think the first match against LA Galaxy in pre-season in Los Angeles,” he said after the St. Mary's stalemate.

However, despite the manager's assurances, there is a general feeling that the former Atlético Madrid goalkeeper will indeed be returning to Spain this summer. And if that is to be the case, there is only one man the Red Devils should be lining up to replace him: Jan Oblak.

The Slovenian international No.1, who plays for de Gea's former side Atlético, is reported to be the name at the top of Mourinho's shortlist of goalkeeping targets if their current custodian departs, with the Daily Star claiming this week that a £40million bid for the 24-year-old is being lined up.

An offer of that size is highly unlikely to be enough to convince Atleti to part ways with Oblak, who is widely regarded as one of the best goalkeepers in the world and has a €100million release cause written into his contract at the Vicente Calderón.

But the fact that United are said to be monitoring the former Benfica man — rather than the previously linked Joe Hart and Kasper Schmeichel — is a positive sign for the Old Trafford faithful.

No United fan will want to see de Gea leave the club, such is his importance to the team, as recognised by his being named the Sir Matt Busby Player of the Year for the past three season before being dethroned by close friend Ander Herrera this week.

However, there has always been a general feeling that de Gea would someday return to Spain, and were it not for a failure for the appropriate paperwork to be filed before the transfer deadline two years ago, he would already be a Real Madrid player.

If de Gea goes, signing Oblak would be the best possible consolation. If anything, the Atleti stopper is the only realistic target available to the Red Devils who could even be considered an upgrade on the current Old Trafford No.1. 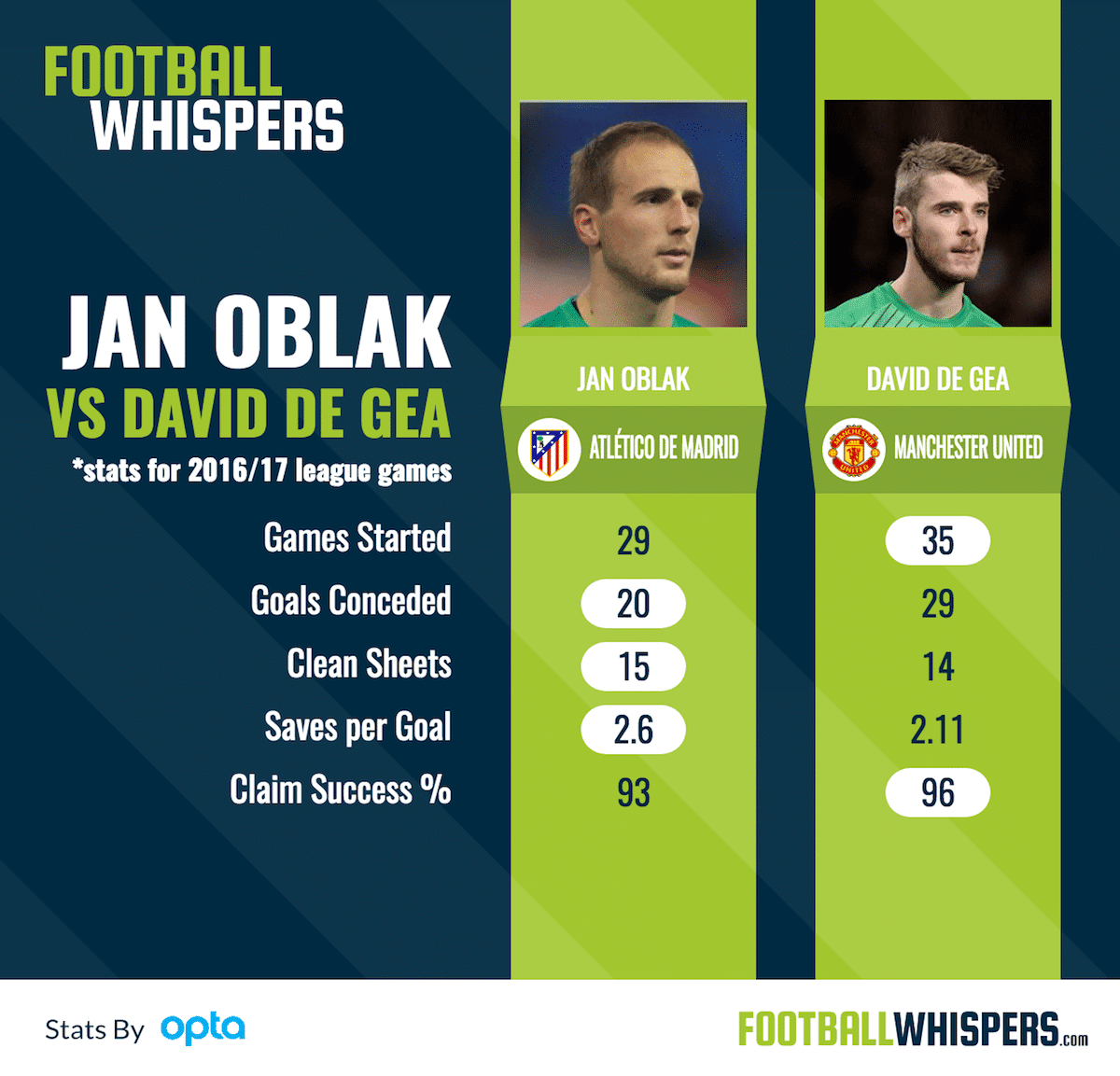 Both Oblak and de Gea are unquestionably among the very best goalkeepers in the world, alongside the likes of Bayern Munich's Manuel Neuer, Juventus legend Gianluigi Buffon and Tottenham Hotspur captain Hugo Lloris.

To rank one above the other is splitting hairs as, in truth, there's not much to choose between the them; they are all outstanding at what they do.

Of the above mentioned group of elite keepers, each has an area where they are perhaps strongest: Neuer excels as a sweeper-keeper behind a high defensive line; Lloris is exceptional in one-on-one situations; and nobody marshal's a defence better than Buffon.

There is a strong argument to be made in favour of ranking de Gea as the best shot-stopper of the five — the Spaniard's reflexes see him pulling off the kind of saves that seem impossible to comprehend to most mere mortals.

However, when it comes to competently carrying out the full gamut of goalkeeping duties, Oblak is surely the most well-rounded. The Atleti star is dependable, communicates well and breathes confidence into his backline.

His technical qualities also leave nothing to be desired. A gifted shot-stopper, Oblak deals well with aerial balls, has a great command of how to narrow the angle on an on-rushing attacker and distributes the ball quickly and accurate via kicks or throws.

If the Red Devils were to sign Oblak, United fans would be unlikely to notice a discernible uptick in the general quality of goalkeeping on display at Old Trafford as the qualitative difference between the two players is minimal — it's not like they would be swapping Jesse Lingard for Lionel Messi.

But Oblak is perhaps the only realistic option that Mourinho could target to prevent a drop-off between the sticks.

Hart and Schmeichel, both mentioned in the press as potential targets recent, are a long way from de Gea's level, while AC Milan's 18-year-old sensation Gianluigi Donnarumma is also an incredible prospect but still has flaws in his game that need ironing out.

Signing Oblak would by no means be easy for United. The Slovenian, who Atleti signed from Benfica for €16million to replace Thibaut Courtois in 2014, has been a key player Los Colchoneros seen his La Liga debut in March 2015. That Spanish club would be well within their rights to settle for nothing short of his full €100million release clause.

But as last summer showed, United are not afraid to spend big on the players they believe will deliver a big return on the pitch. And the 20-time champions of England will demand the kind of fee for de Gea that could see the record for a goalkeeper — set by Juventus' £33million capture of Buffon in 2001 — almost doubled, so cash will be available to ensure the 26-year-old is suitably replaced.

The existence of a buyout fee — compulsory in Spain — means that, by matching the figure, United would circumvent the need to negotiate with Atlético and concentrate fully on convincing the player to make Old Trafford his new home.

Of course, Mourinho's primary option will be retain de Gea, but if that becomes an impossibility, Oblak is the perfect solution.