With Liverpool transfer target Virgil van Dijk not travelling to France with Southampton for their pre-season training camp, it looks like his Saints career is over.

Manager Mauricio Pellegrino said last week the Dutchman would not be involved in the trip after the centre-back told him he wanted to leave the club.

“He is not involved with the team because psychologically he is not 100 per cent,” the Argentine said last week.

“If you are not 100 per cent with the team I need to work with the players who are 1,000 per cent to defend Southampton.

“I hope that Virgil can review his feelings because you know that today a player is big business.”

In the meantime the 26-year-old is training by himself, and while Saints fans obviously do not want him to leave, there is little they can do, but hope to get a big fee for the centre-back when he does depart.

That money would more than likely go on replacing him, but perhaps a player already at the club – Jan Bednarek, who arrived earlier this summer could be the man to step into van Dijk's shoes.

The move came after Bednarek just finished competing with his country in the Under-21 European Championships, hosted in his home country.

It was a tournament to forget as Poland finished bottom of Group A, with just one point from three games and the centre-back was sent off for a second yellow, conceding a penalty in the 3-0 defeat to England.

That didn't deterred Southampton’s desire to sign the Lech Poznan player, upping their offer from the £4.5million bid that was rejected in the middle of June. Bundesliga side Hannover were also known to be interested, but their valuation of under £3m was quickly dismissed.

And Southampton paid the biggest fee ever received for an Ekstraklasa player to bring the Polish defender to St. Mary’s.

“Moving to England, for what is a massive fee – Dortmund paid Lech around €4.5m for Robert Lewandowski in 2010 – is something of a gamble,” Polish football expert, Ryan Hubbard, exclusively told Football Whispers.

“Considering he's just turned 21, Bednarek has picked up a wealth of experience in the heart of the Lech Poznań defence. Coach Nenad Bjelica trusted his abilities enough to start him 34 times, as Lech battled for both the Polish title and the Polish Cup. Lech ended the season without silverware, but with the tightest defence in the top flight.”

What does Bednarek add to Southampton?

Comfortable on the ball, the youngster has a keen eye for a pass, using his right foot to pick out long, diagonal passes to either flank. Playing with his head up, he can pick out when the full-backs are free and delivers accurate, direct outlet balls.

Rather than just launch passes forward, he can take his time and has the technical abilities to thread a through ball.

In the graphic below, you can see that Bednarek has the option of a simple forward pass, somewhat unchallenged. 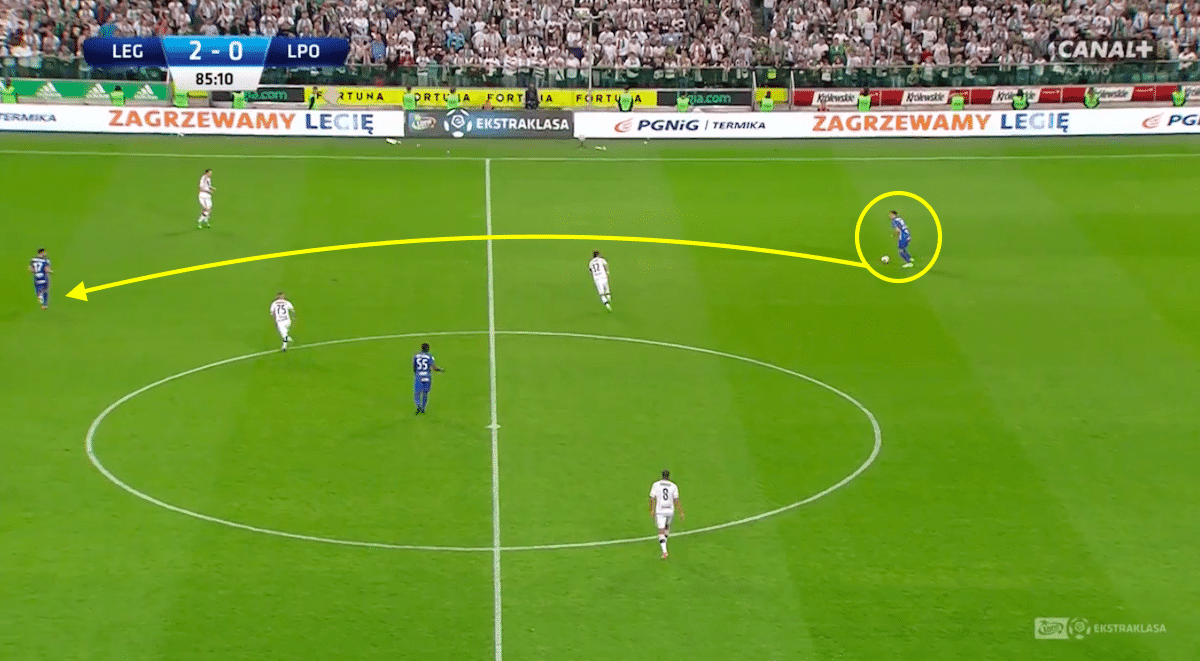 The 21-year-old waits for his team-mate to make a move, playing on the half-turn. After taking a few steps further forward, he then times his pass and threads the needle. 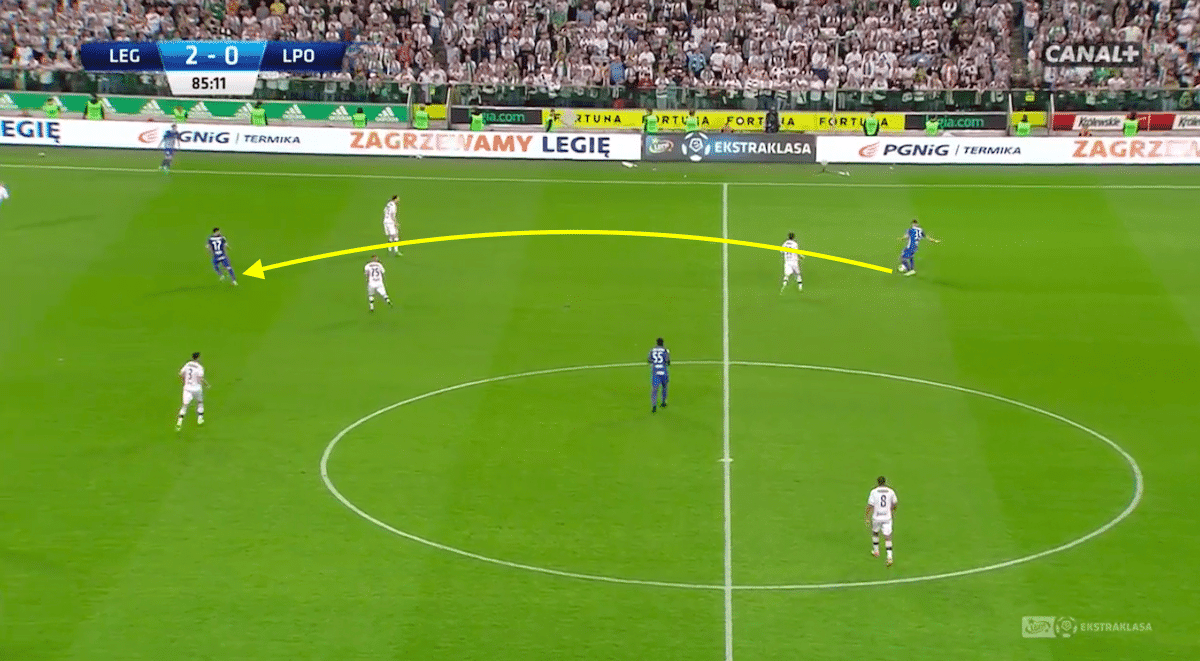 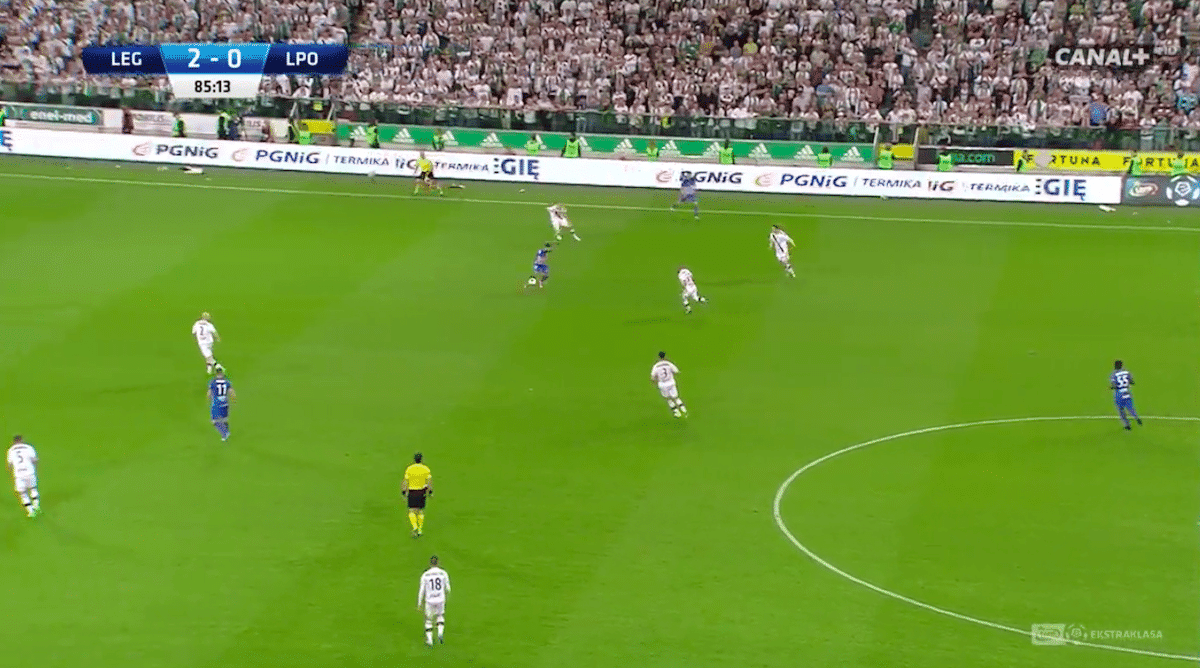 Receiving the ball unmarked, Lech are then through on goal. The defender didn’t take the easiest option, he waited for the opportune moment to pick out the attacker, maximising the danger.

Up for the physical battle

What is quickly apparent from watching Bednarek’s performances, is despite his technical upbringing, he’s keen to add a physical element to his game.

He likes to mark his opponents tightly, looking to play at their back and muscle his way in to intercept the ball. At 190cm tall, he’s a strong presence at the back and rather than wait for the attackers to gain possession and turn, he reacts and makes his move.

A member of the Polish youth sides from Under-17 to now the Under-21, he is highly touted with a call-up to the full national team and he has all the raw tools to make that jump.

Despite his size, he’s quick to push out wide and cover danger down the flanks, plus he can go to ground when needed, able to slide in with both feet.

Bednarek is smart too and he shown intelligence and experience for someone still quite young.

Playing in a tight match against Wisla Krakow, the home side are pressing forward and when his team-mate rushes out to meet the ball, the Under-21 international holds his ground and isn’t dragged towards the ball. 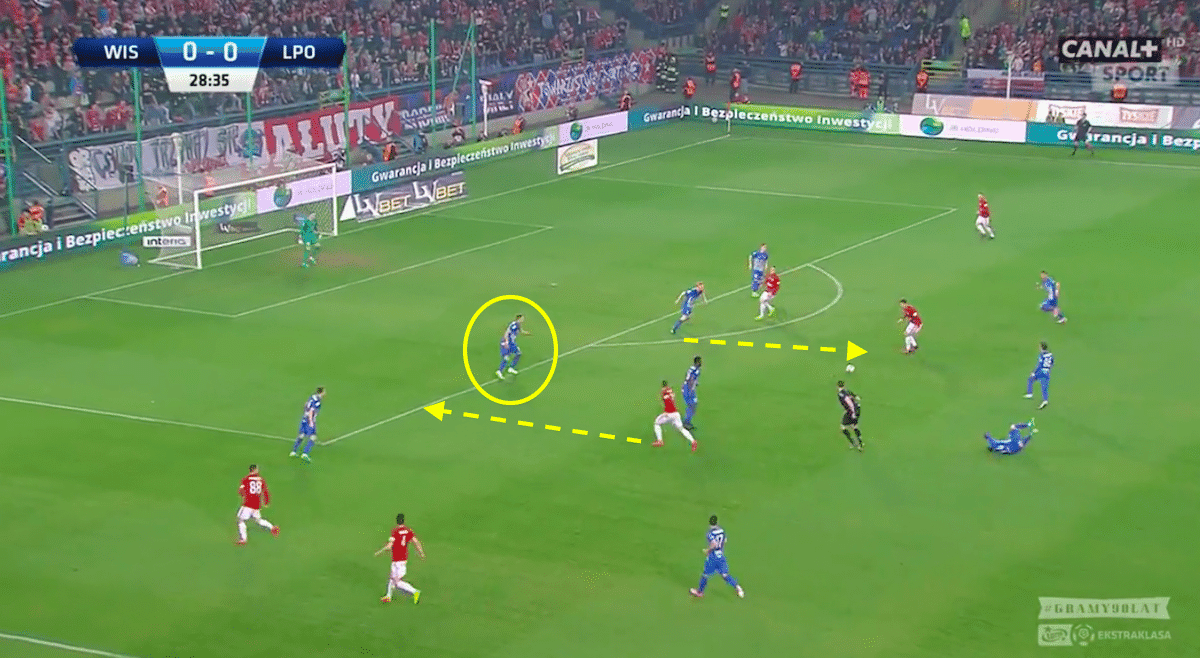 The play moves to the right and rather than succumb to the temptation to track an opponent’s run, he takes up a position in the danger zone and is there to intercept the low cross, clearing the ball to safety. 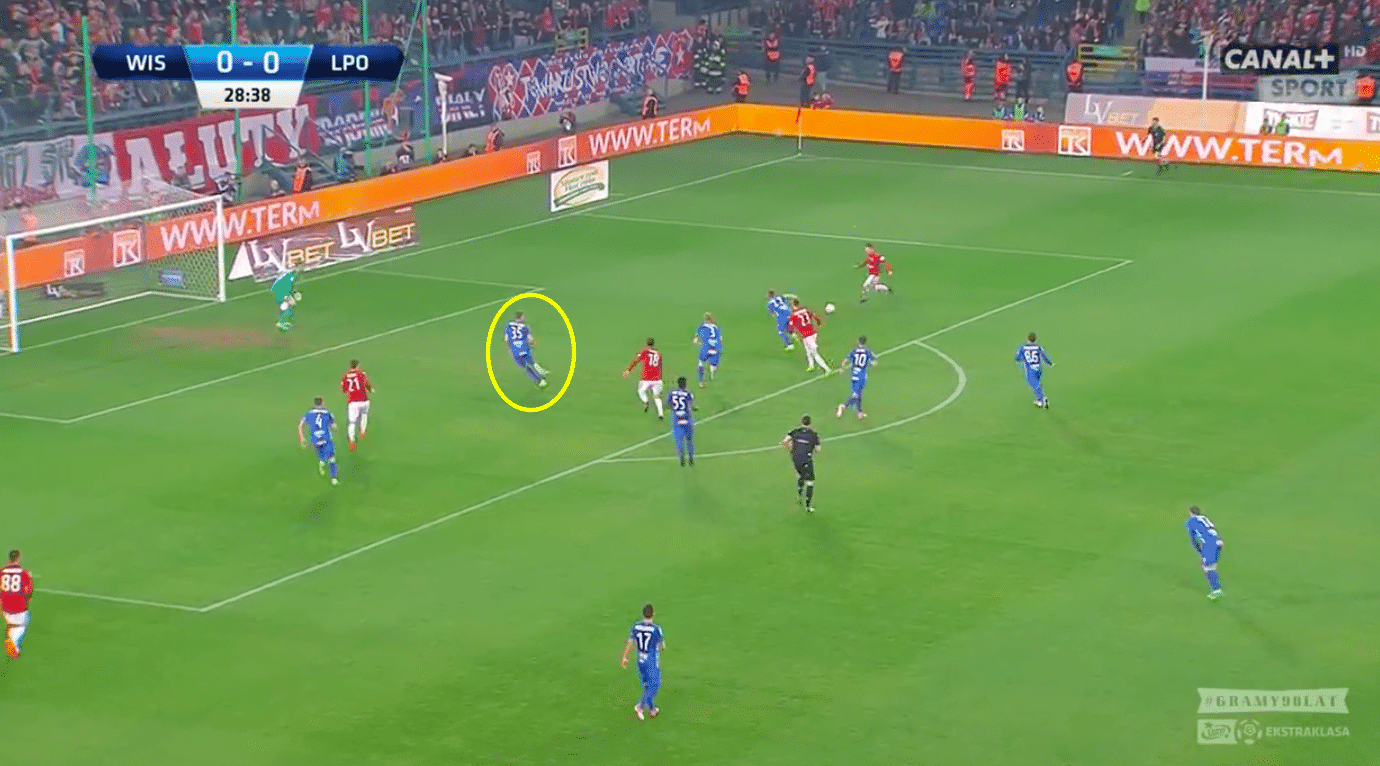 At two or three times, he could have made the wrong decision, perhaps leaving his side exposed, but he doesn’t and Lech survive.

Massive room for improvement at Southampton

Although Saints have paid a record fee for someone from the Polish top-flight, that doesn’t mean Bednarek is the finished product.

Spotted by Les Reed, the defender fits the Southampton profile. He’s young, fairly inexpensive and has room to grow and develop. Perhaps being linked with an eight-figure sum in a few years’ time.

“Bednarek wasn't in the best of form during Poland's U21 European Championship campaign,” continued Hubbard.

“Failing to deal with the pace of the England attack; while young Polish players have struggled to adapt to the physicality of English football having been brought-up playing in the technically-leaning Polish leagues.”

“If he's given time to adapt and settle in – maybe even with a loan move to a lower league club – Bednarek could eventually prove a solid addition. If not, it could be a massive waste of his talent.”

Although his physical talents are there, he does tend to rush in and attempt a challenge, often exposing himself or his team.

It was that eagerness that helped Tammy Abraham get in behind the centre-back and the 21-year-old could only pull back the Swansea City man, picking up a second yellow card.

There were other examples against Sweden too and that’s the biggest area he could improve. It’s clear he loves that challenge, being aggressive, and if he can nurture that and learn when to attack and when to hold off, there is an exciting prospect ready to emerge.

Joining a club like Southampton is a great decision by Bednarek, he will have space to breathe and the chances to play in the first-team, plus his new coach, a centre-back, played over 160 games in La Liga and 45 times in the Champions League, not to mention 12 appearances in the Premier League for Liverpool. He knows what you need for that position and could be the perfect manager to bring out his best.

Far from the finished product, he may not be a direct replacement for Van Dijk just yet – even the Dutchman needed a spell in Scotland to develop further – but the potential is there, and with the right guidance, he could become a huge Premier League talent. 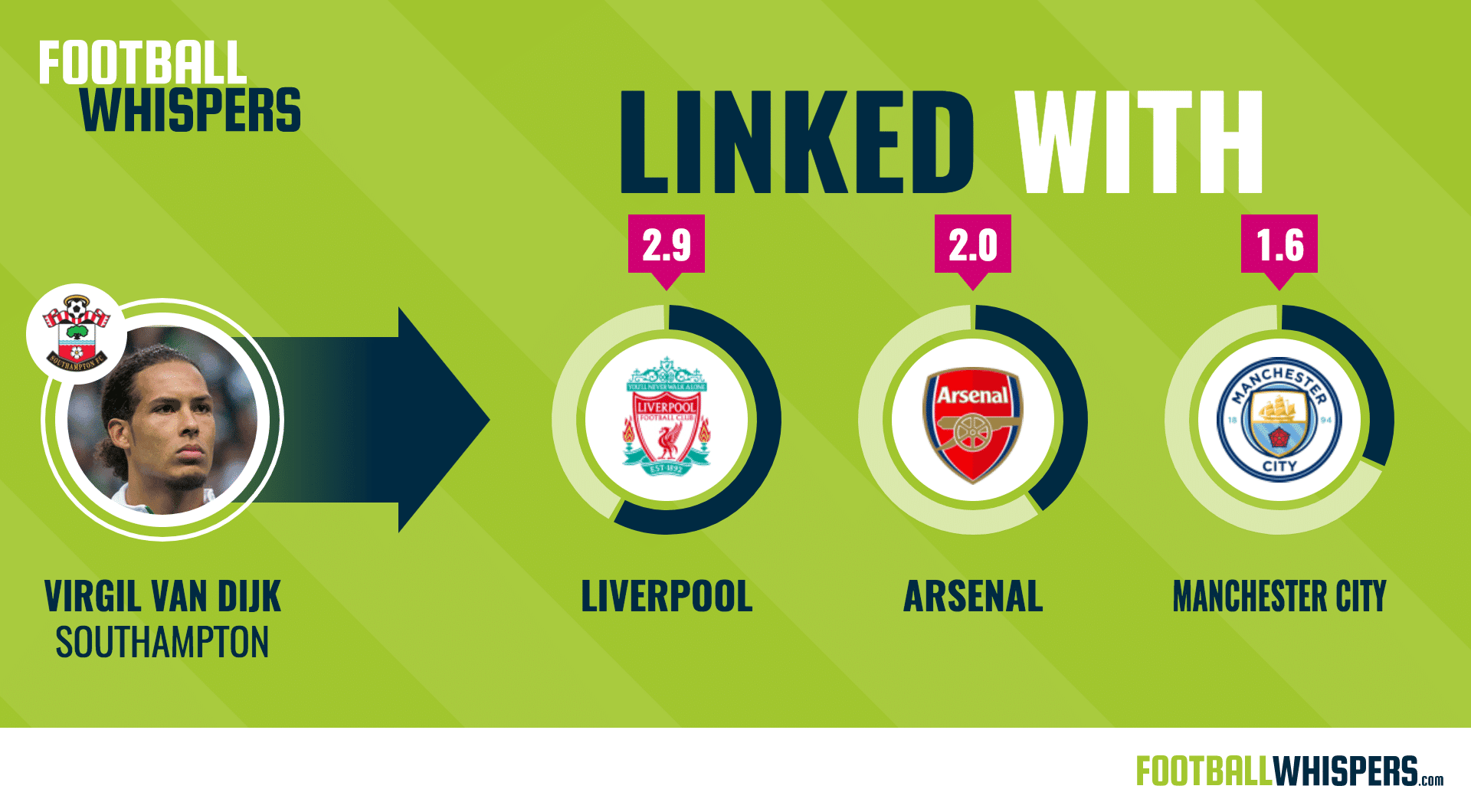