James Ward-Prowse is the sort of player every Premier League manager would love to have. Except he's not always been appreciated by his bosses at Southampton. Until now.

The Saints' journey since returning to the Premier League in 2012 has been a rollercoaster ride. Highs and lows, a cup final, European jaunts and Great Escapes. And plenty of managers. While the men in the dugout haven't lasted, academy product Ward-Prowse has been there every step of the way.

Yet Ward-Prowse, who was born along the M27 in Portsmouth, has not always figured heavily every manager's plans. In 2013/14 and 2015/16 he made more appearances as a substitute than as a starter. Until this season he hadn't made more than 22 Premier League starts in a single season.

Current incumbent Ralph Hasenhüttl is a fan – but that wasn't always the case. The Austrian took a little convincing after being appointed on December 5, 2018. Indeed, the long-serving midfielder didn't start any of Hasenhüttl's first four games in charge. Now he's making up for lost time.

Under the former RB Leipzig coach, Ward-Prowse has arguably become Southampton's most important player. For starters, his versatility makes him a huge asset. He has played right-midfield, central midfield, No.6, No.10 and at right-back this season.

His quality on the ball – particularly in set-piece situations – is similarly important and he has contributed 40 chances, five of them ‘big' and two assists this season. It's no exaggeration to say Ward-Prowse might be the finest English striker of a dead-ball since David Beckham.

Every bit as imperative yet rather less glamorous is his boundless energy and tireless work-rate. Ward-Prowse has a wand of a right foot but he's no luxury player and that is why he's found himself scurrying up and down the right-hand side this season.

What will have caught Hasenhüttl's eye, though, is his defensive output. Since December 25, Ward-Prowse has contested 5.43 tackles per 90 – more than any midfielder in the Premier League. That is a stark contrast to the 1.56 he averaged from the start of the season up to Christmas day. 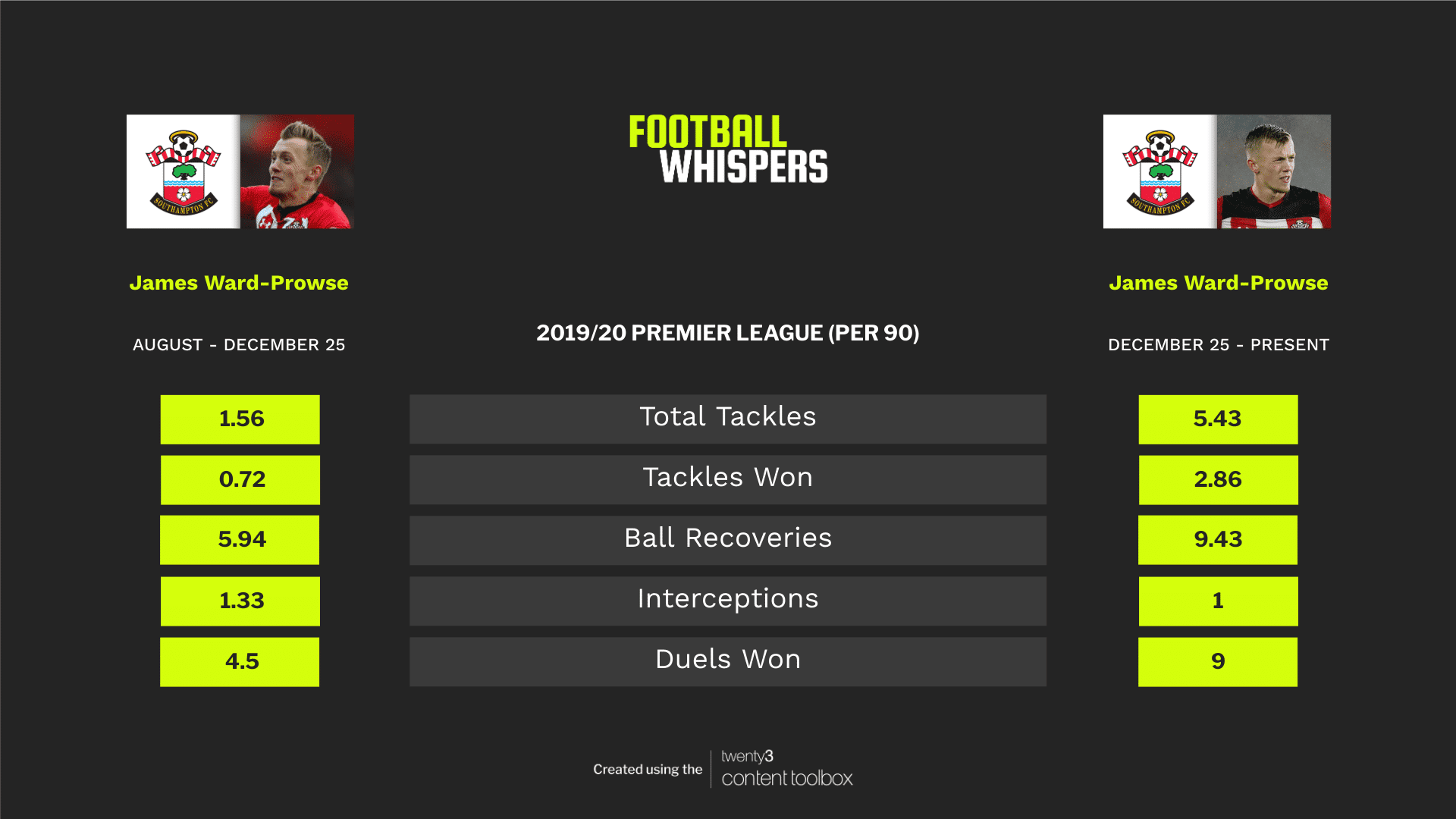 “I think it was the biggest change in his game since I'm here,” Hasenhüttl told the Daily Echo.

“He was always a good player and had a fantastic right foot but never nobody saw him defending or winning balls like he does at the moment.

“This is maybe something he had to learn, and he had to show me, he did it.

“After a few weeks when I was here, I could see this transformation in his game was there and in the end, in modern football, every player has to have everything, also the strikers have to work against the ball, and the centre-backs or the full-backs must be a number 10 when they have the ball.

“This is in modern football necessary, you cannot have any weakness and Prowsey is on the way to getting a full package.”

It's Ward-Prowse's knack for turning possession over which will have Hasenhüttl most excited though. The Saints boss is big on pressing, winning the ball back and quick transitions – in his utopia, Southampton would have a shot within ten seconds of the turnover.

“We need to see a good trigger after losing the ball, good momentum when we go to fight to win it back again immediately,” the told The Athletic earlier this season.

So, we can reasonably assume, part of Ward-Prowse's new-found success when it comes to winning the ball back has been coached and practised on the training ground. However, there has also been a tactical tweak which has aided the twice-capped England midfielder.

After a dalliance with a three-man defence, Hasenhüttl reverted to his prefered 4-2-2-2 system on November 23 for the trip to Arsenal. The Saints secured a 2-2 draw at the Emirates and have not looked back since, utilising the double pivot – or a variation of – in every Premier League fixture since.

The change has meant Ward-Prowse playing deeper alongside skipper Pierre-Emile Højbjerg (below) as Southampton's average position maps for the two periods outline. 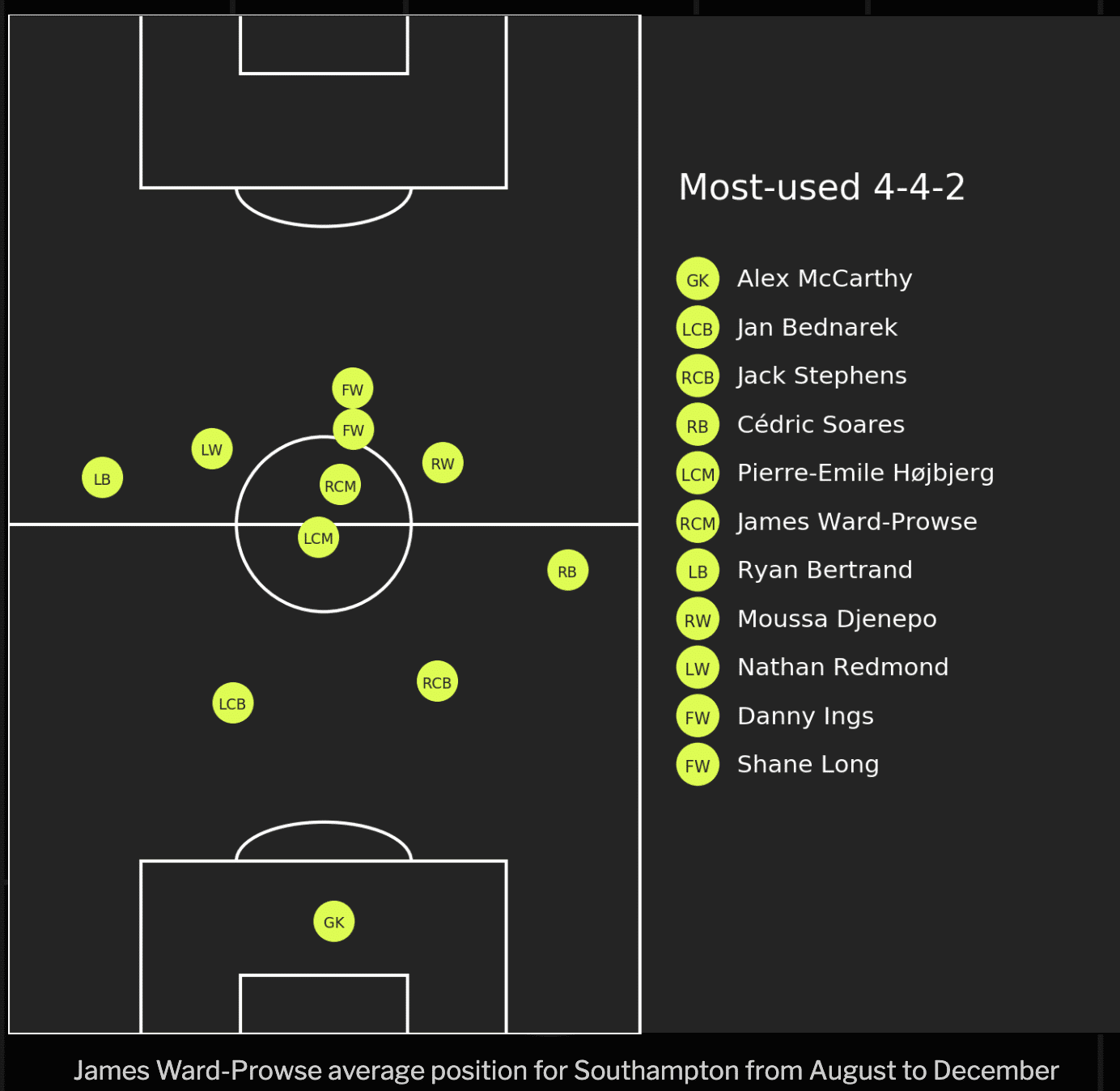 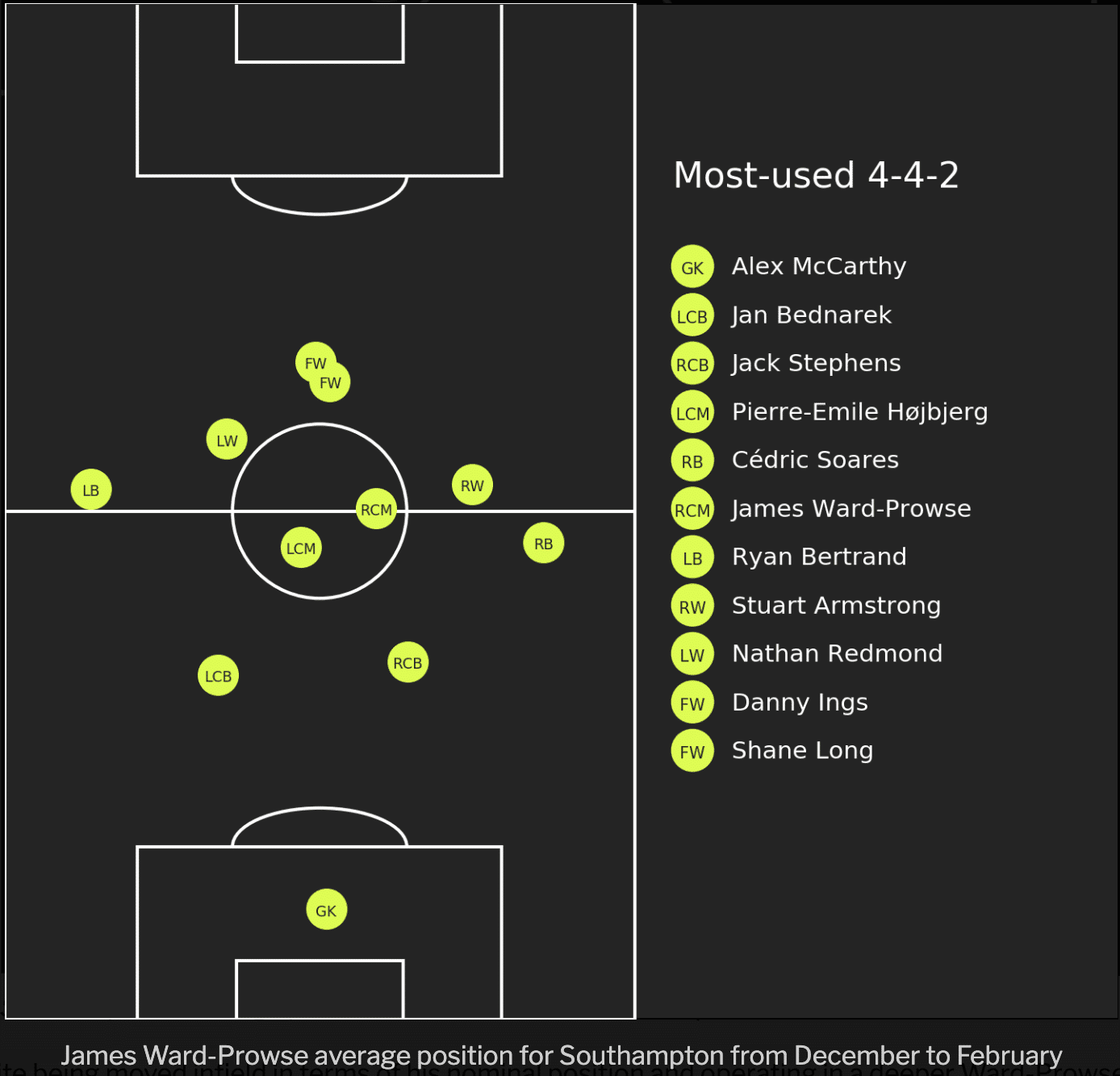 Despite being moved infield in terms of his nominal position and operating in a deeper Ward-Prowse is still performing a high volume of work on the right, though he is spending less time scuttling up and down the flank –  evidenced in his respective heatmaps for the periods (below). 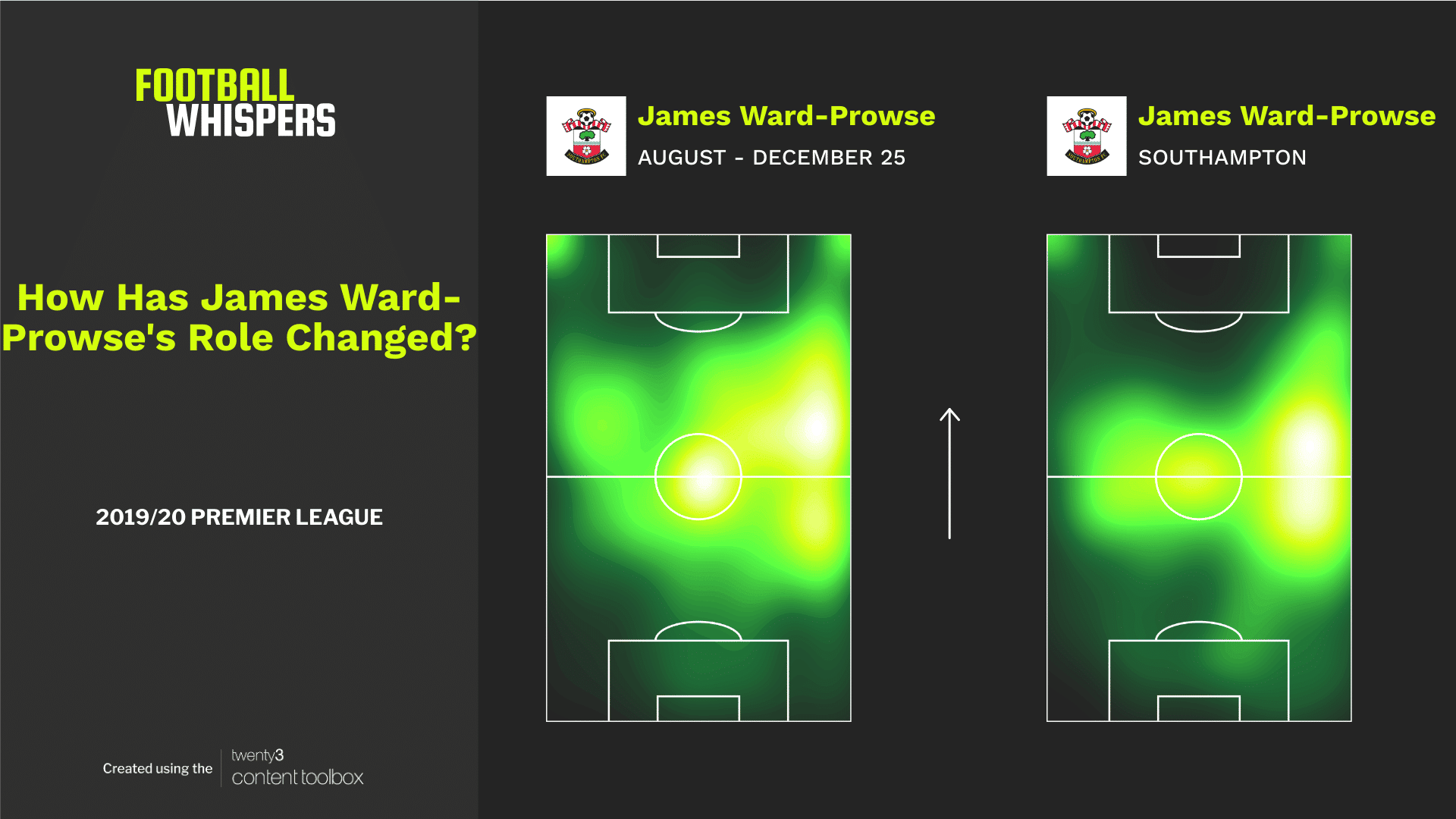 Since making the change in system and tweaking Ward-Prowse's role, Southampton have played 13 times in the Premier League picking up seven wins. Had the season started with that 2-2 tie at Arsenal, the Saints would be fifth in the league – only three points behind Manchester City.

It has taken a while but Hasenhüttl is getting the best from Ward-Prowse and the Saints are marching up the table as a result.