Leicester City are planning for the worst. Though the Foxes reportedly rejected a £70million bid for Harry Maguire from Manchester United, Brendan Rodgers and his recruitment team are identifying potential replacements on the off chance the Red Devils do up their offer.

Reports claim £80million, a world-record fee for a defender, would be required to convince them to part ways with the former Hull City man. Most clubs would baulk at such a figure but United aren’t most clubs. They can afford it. Leicester know this, too, and it’s why they're putting together a contingency plan.

The Daily Mail report Burnley centre-back James Tarkowski is top of the potential replacements list. The England international was previously a target for Liverpool and has been linked with big-money moves away from Turf Moor.

However, a move has never materialised with many feeling Tarkowski is something of an unknown.

Burnley play a unique brand of football and it clashes with the ideologies of the top teams. They sit deep, soak up pressure and then look to hit teams on the break. Set pieces are a weapon utilised by Sean Dyche’s team, too.

Now, there are similarities between Burnley and Leicester in the sense both teams want to get the ball forward. The former want to use the hold-up play of Chris Wood and Ashley Barnes while the latter want to make the most of Jamie Vardy’s pace. Different outcomes but the thought process is somewhat similar.

But Burnley are undoubtedly more direct. And this is what makes it difficult to judge Tarkowski properly. Just because he isn’t playing the ball out from the back or averaging a high number of touches doesn’t mean he doesn't have that in his locker, it just means the system he’s in doesn’t require him to do that.

Yet there are no guarantees he can, of course, and that is why the Premier League's top-six clubs won't gamble on him. But Leicester are in a position to do just that. 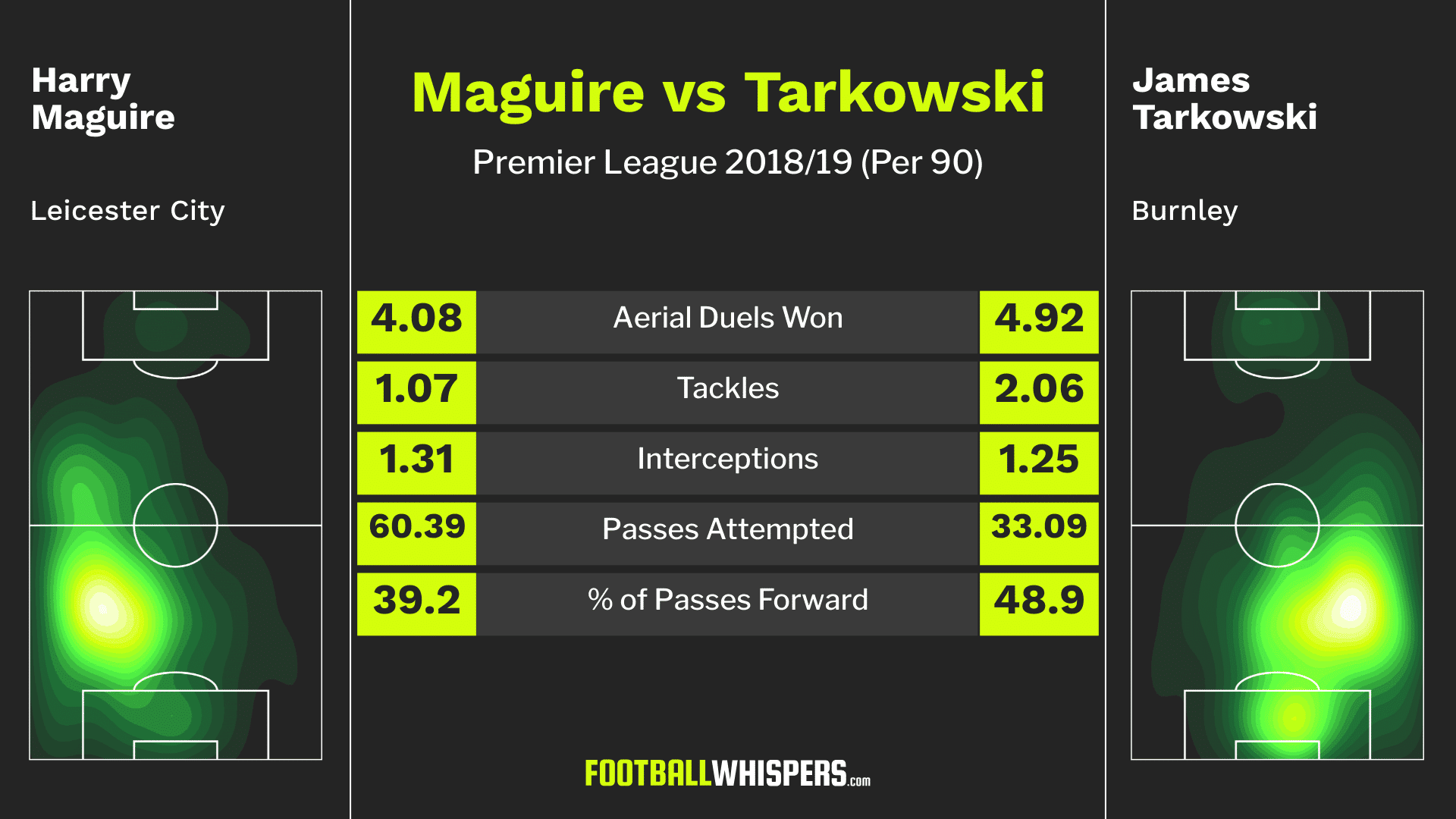 As crazy as it sounds, £40million for a 26-year-old England international with experience in the Premier League seems like good value for money. Competent and assured, he's already performing to a high level and there's no reason he couldn't improve as he heads into his peak years.

To replace Maguire, Tarkowski will have to excel in the same areas the Sheffield-born centre-back does.

Both win over four aerial duels on a per 90 basis, with the Burnley man competing for two more on average. Again, it's dependent on the system but it does show he's dominant in the air and could replace Maguire in that sense.

Tarkowski is busier, as expected playing in a defensive side, and makes more tackles per 90 and slightly fewer interceptions. Could this be because he's a reactive player as opposed to a proactive one and he has to make tackles to make up for not positioning himself well enough? Or is it a systematic issue, again?

The real conundrum for Leicester is when it comes to passes. Maguire sees a lot of the ball and averages 60 passes per 90, 27 more than his Burnley counterpart.

How will Tarkowski cope seeing more of the ball? If he's not as confident on the ball as the Foxes' No.15 then it'll be an issue. But he does look composed and has done whenever he's played for England. The transitional period shouldn't be a bumpy one.

Defensively he's switched on. His use of the ball is incisive and progressive, perfectly suited to Rodgers' style. At £40million he'll never be considered a bargain but if he manages to fill the Maguire void for half the price then Leicester have played a blinder in the transfer market.