Were you to find yourself on Manchester United’s official website, you might make your way to the club’s online shopping page. Once there, you could be tempted by any number of products. Perhaps a Paul Pogba figurine might catch your eye, or a Paul Pogba poster. And if they don’t float your boat, a Paul Pogba mobile phone cover just might. Or a mug adorned by Pogba’s signature. Or a signed photo of Pogba in Manchester United kit.

None of this is necessarily striking, and it isn’t out of place with football as it is today, but it does go some way to explaining Manchester United’s transfer policy in recent seasons. In the process, it helps to make sense of why Real Madrid’s James Rodríguez has been persistently linked with a move to the Premier League giants come this summer’s transfer window.

Last summer, Manchester United paid a world record transfer fee of £89 million to sign Pogba from Juventus. The deal was talked about for months, heavily hyped and, once confirmed, was promoted consistently across social media. In the same window, iconic Swedish striker Zlatan Ibrahimović arrived on a free transfer. Both signings were in line with the club’s strategy in recent years, which has been geared towards building the club’s brand. 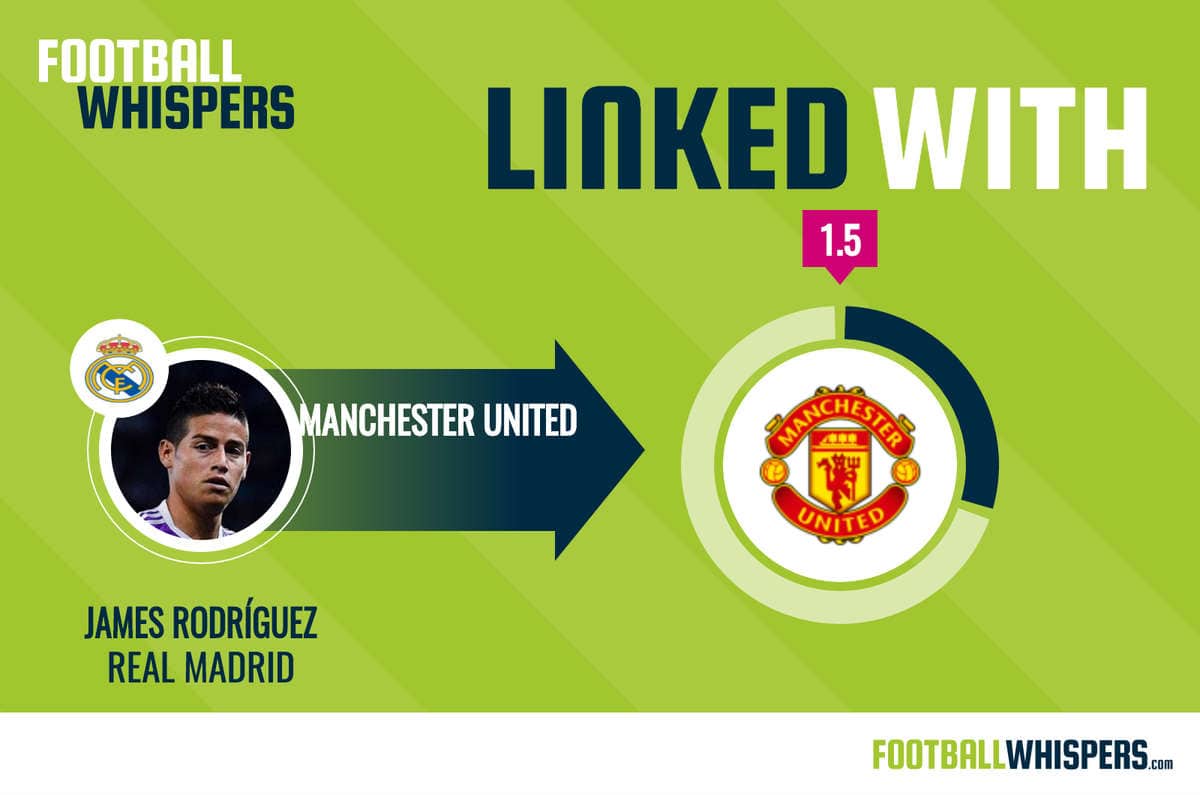 READ MORE: DOES JAMES RODRÍGUEZ HAVE A FUTURE AT REAL MADRID?

The team might have struggled on the pitch in the years following Sir Alex Ferguson’s retirement, but commercially the club is performing better than ever. Indeed they topped the latest Deloitte Money League, superseding Real Madrid in the process. This improvement was facilitated by the club’s approach to the transfer market.

When Manchester United buy, they in turn sell. Players come in, and merchandising goes out. They possess one of the most renowned brands in the world, and transfers such as those involving Pogba and Ibrahimović only strengthen this position. Rodríguez’s signature would undoubtedly have similar commercial motivations, and it wouldn’t be the first time the Colombian has switched clubs due to such reasoning.

In 2014, Rodríguez became a superstar. Previously a talented prospect who had impressed in spells with Porto and Monaco, he broke out into the mainstream at that summer’s World Cup in Brazil. In what was a fiesta of football, he led an exciting Colombian side to the quarter-finals of the tournament. As well as two assists, he scored six times to win the Golden Boot. Less than a fortnight after the competition, he was a Real Madrid player.

While it wasn’t a world record, the €80million paid to sign Rodríguez from Monaco was an eye-watering amount, especially for a player who had only just established himself at the highest level. But the fee was merely a statement of Real Madrid’s status, and the transfer paid for itself. Within two days it was reported that the club had sold approximately 345,000 shirts with ‘James’ emblazoned across the back, recouping almost a third of the transfer fee days after the deal had been announced.

Florentino Perez’s second term as Real Madrid president has looked a lot like his first. Between 2000 and 2006 he brought Luis Figo, Zinedine Zidane, Ronaldo (the Brazilian one) and David Beckham to the club. La Liga and Champions League titles were won, and the club became known as the ‘Galacticos’. Since returning to the presidency in 2009, Perez has pursued the same strategy, signing Cristiano Ronaldo, Kaká and Gareth Bale. Rodríguez, therefore, was one among many stars signed to build the brand, but he has not lived up to the early hype.

The attacking midfielder enjoyed a strong debut campaign at the Santiago Bernabéu, scoring and setting up 13 goals apiece and starting 29 of Real Madrid’s 38 league fixtures. However, his second term was disrupted by injuries and criticism of his weight. This season, he has been restricted to a mere eight league starts, scoring three goals and assisting six times. As a consequence, the rumours of an imminent departure are unsurprising. 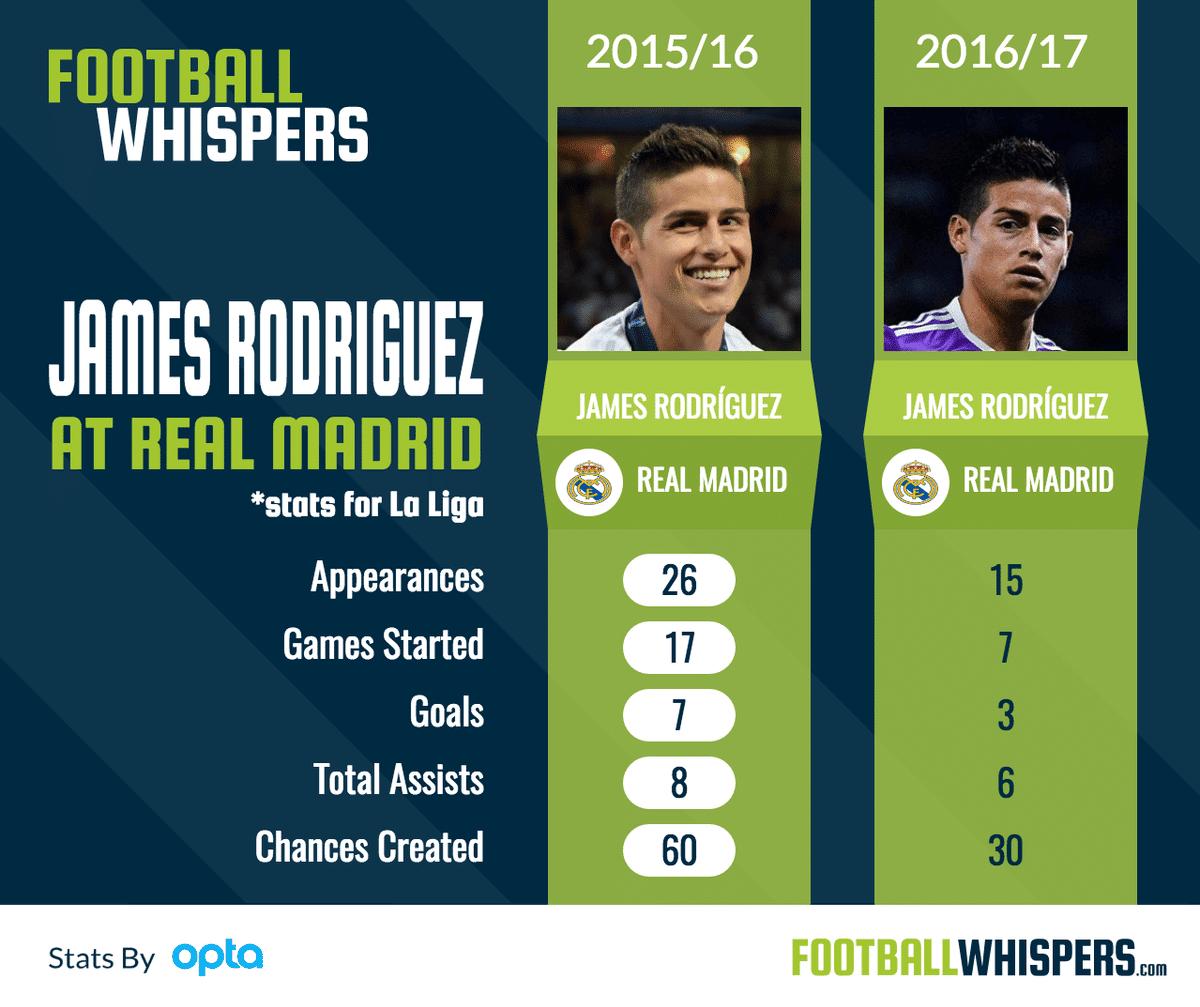 Rodríguez remains a quality playmaker with remarkable vision and precise passing, but he would present serious tactical issues to Jose Mourinho were he to join Manchester United in the summer. Mourinho has rotated personnel and experimented with different systems since arriving in the Old Trafford dugout last year, but results suggest the 4-3-3 to be his best option.

This system often sees Pogba in a midfield three alongside the deeper lying Michael Carrick and the more combative Ander Herrera, while Ibrahimović is supported from wide by two of Juan Mata, Henrikh Mkhitaryan, Anthony Martial and Jesse Lingard. The difficulties had by Mkhitaryan – the German Bundesliga Players’ Player of the Season in 2015-16 – in nailing down a regular starting berth show the level of competition for places in Mourinho’s attacking midfield area, and Rodríguez’s signing would only contribute towards an even bigger selection headache.

The quandary for Mourinho would be how to fit Rodríguez into the 4-3-3 when he already has two exceptionally gifted left-footed players who – when not able to play in their preferred No.10 role – like to cut in from the right-hand side in Mata and Mkhitaryan. And, were Mourinho to sacrifice the 4-3-3 that has worked so well for a 4-2-3-1 system that would accommodate Rodriguez in the hole behind the striker, this could lead to issues of balance in midfield, where Pogba’s forward runs and desire for creative freedom would be covered by one solitary defensive midfielder.

Commercially, James Rodríguez would be perfect for Manchester United. He’s a big name who has starred at a major international tournament, has played for Real Madrid and would no doubt come with a sizeable transfer fee. His arrival would boost shirt sales and help cement the club as football’s best known brand. However, tactically, the Colombian’s signature would only cause problems.

Ultimately, whether Manchester United sign the player or not will say a lot about their priorities as a club, and how much they are willing to sacrifice on the pitch for success off it.