James Rodríguez has fallen out of favour at Bayern Munich this season. The Colombian, on loan from Real Madrid, has been left to contemplate his future from the bench by manager Niko Kovač, who appears to remain unconvinced by what he offers.

There is talk of a loan move to Arsenal until the end of the season, although that may be dependent, given the club’s finances, on Mesut Özil leaving the Emirates this month.

Rodríguez would, in effect, be viewed as a direct replacement for the German. But, despite his struggles in Germany this season, he has a unique, and very different, set of traits.

The 27-year-old has been restricted to just five starts in the Bundesliga, and only two in the Champions League. He has made a further four appearances from the bench in all competitions but clearly has no intention of continuing as a bit part player.

“It is a different situation to last season,” Rodríguez said last month. “We are not competing for as much with the new coach and so we can't promise as much. If I have to go because I am not playing then I will go. You know that I want to stay because I feel the love of the fans and all the Bayern family.”

Rodríguez featured far more regularly under Carlo Ancelotti last term, making 39 appearances in all competitions and contributing to Bayern’s domestic success. That has not been replicated in this campaign.

The question now, then, is what would Rodríguez bring to Arsenal should a deal be agreed before the close of the transfer window?

Though he has been starved of regular football this season, and thus his stats are taken over a small sample size, Rodríguez remains both a creative presence and a goal scoring threat when on the pitch for Bayern. He has averaged 0.57 goals per 90 minutes in the Bundesliga, compared with Ozil’s 0.27 in the English top flight.

Clearly, Arsenal boss Unai Emery seeks an attacking midfielder whose involvement in games will be less passive, whose contribution will be more tangible. In Rodríguez, he would have that.

Rodríguez is far more of a direct goal scoring threat, too: he has touched the ball in the opposition’s box an average of 5.72 times per 90 so far this season – compared with Özil’s 2.75 – and managed 3.24 scoring attempts per 90 – Özil averages just 0.55.

Clearly, then, Rodríguez shoots more often where Özil looks to play a defence-splitting past. The former is a No.10 who prioritises scoring goals, the latter a No.10 who primarily plays the role of provider.

Rodríguez can appear more purposeful, too, a move away from the languid style of Özil’s that has frustrated so many at Arsenal. It is obvious that it has frustrated Emery too, so much so that he is now reportedly interested in signing a replacement. 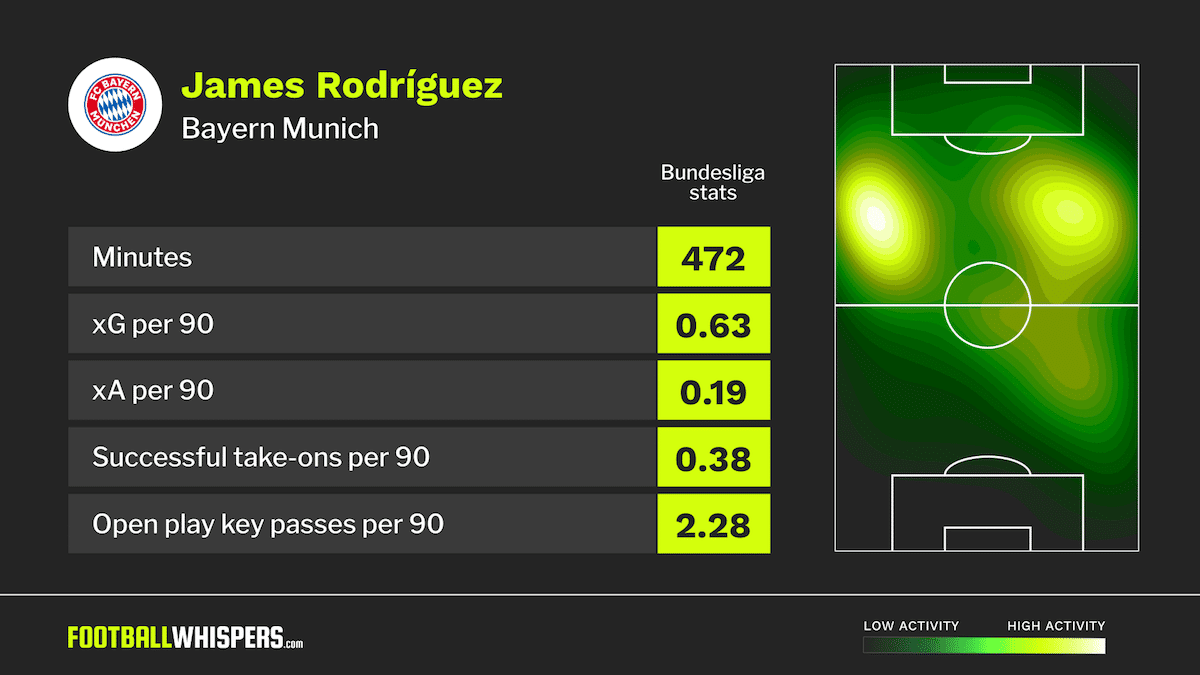 Rodríguez would not necessarily represent an improvement in all areas, though. Özil remains a more creative player – his xA per 90 (0.28) is significantly better than Rodríguez’s (0.19) – even when he is out of form and out of favour, as has been the case this season. And he still creates more opportunities: Özil has averaged 0.18 big chances created per 90, while Rodríguez averages… 0.00.

Perhaps the two may yet function in the same team, although that seems highly unlikely. There appears to be an ideological split between Emery and Özil. The signing of Rodríguez, even if it is a loan until the end of the season as expected, might spell the end for the Germany international at Arsenal.

“I know it is not easy for us now in this transfer market and if we can find one player who can help us like we need, with the quality and a different player for getting in our squad, we are going to do it,” Emery has said.

“I am happy because another player can have chances when one player is injured and they are doing well. That is the reason for us being calm and my confidence with the club is big. They are working and if one or two players can come and help us that is perfect.”

Rodríguez fits the bill. He would add a new dimension to Arsenal’s attack, an alternative route to goal in a team already stacked with talent in the final third.