James Maddison is having quite the start to the new campaign.

The 22-year-old is being touted as the saviour of the England midfield, with backing from fans and media alike. He’s also now tipped to be Philippe Coutinho's replacement at Liverpool, a hole the Premier League leaders are yet to fill.

According to the Daily Star, the Leicester City playmaker is perfect for the Reds and a January move shouldn’t be out of the question given the club have made several of their greatest signings in winter.

Coutinho, Daniel Sturridge, Luis Suárez and Virgil van Dijk all made the switch to Merseyside midway through the season and went on to have great success at Anfield.

Clubs are often against making moves in January with many feeling there’s no value for money. However, it’s the ideal opportunity to add reinforcements and Liverpool should be looking to do just that despite their fantastic start.

The Reds are in fine form but offensively they lack a top-quality replacement should one of the fabled front three suffer long-term injury.

Klopp’s men looked out of their groove when Divock Origi started against Newcastle United and while Maddison isn’t a direct replacement for any of the trio he could play the Coutinho role as the fourth musketeer in attack.

The former Norwich City man shares a number of traits with the Brazilian maestro. For starters, both aren’t trusted to play as part of a midfield three, at least not over a sustained period of time.

The Foxes have talent in wide areas and could deploy Maddison as an attacking midfielder centrally but Brendan Rodgers opts to use him on the left, as evidenced in the heat map below. 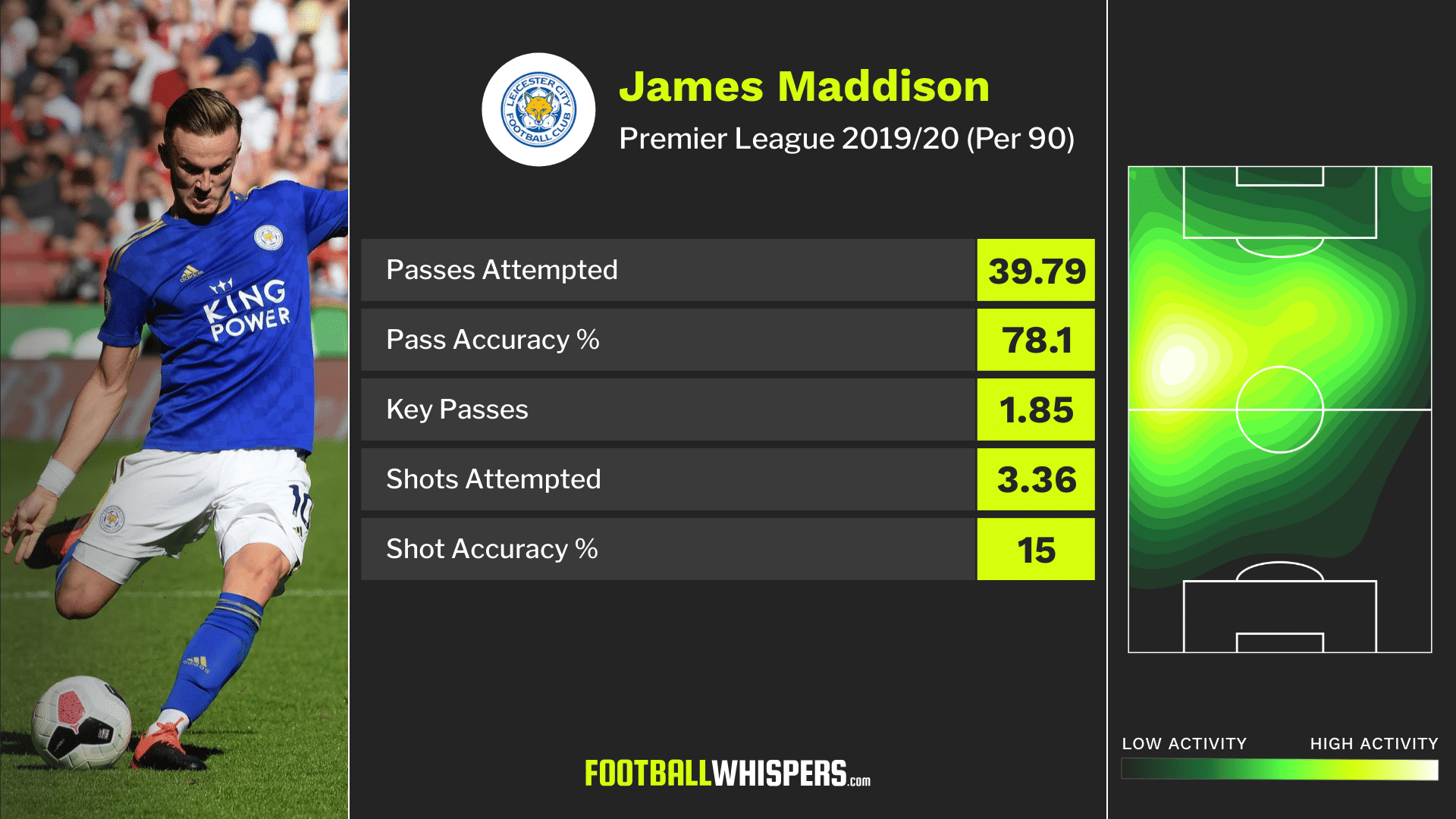 Maddison is instructed to come inside off the flank and influence games, something he does very well. However, if 22-year-old started centrally in a three-man midfield, Leicester would be weakened.

It's exactly what happened with Coutinho at Anfield under Klopp. Rodgers used the Brazilian on the left of a diamond but the Reds conceded 50 goals that season. Fun to watch, yes, but far from defensively sound. No doubt it'd be the same for Leicester if they used Maddison as part of the middle three.

At Liverpool, there's no chance he'd be used in midfield: Klopp is meticulous about the profile of player deployed in the middle of the pitch.

It's all about work rate; ability on the ball isn't the be-all and end-all. To be used by the German tactician a midfielder either needs to be a workhorse or have explosive pace to beat the opponents and create space.

Maddison doesn't tick either of those boxes and, as an attacking force, he isn't potent enough to chip in with the goals required from a Liverpool forward.

His strike against Spurs was his first of the Premier League campaign and heading into that fixture no player in the top flight had taken more shots without scoring. 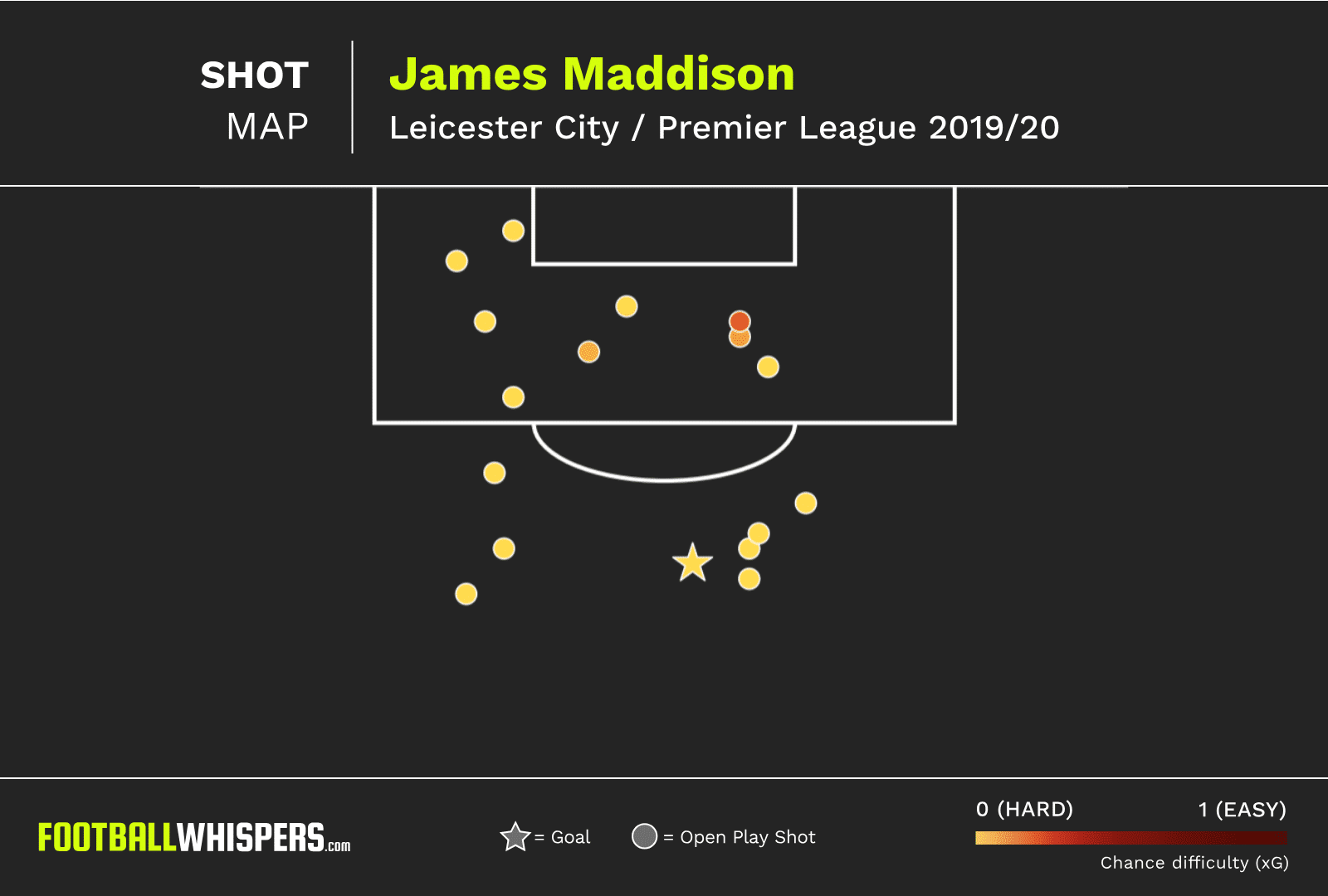 Looking at the numbers alone, you might suggest he's been unlucky – to be averaging 3.36 shots per 90 without scoring is quite some feat.

He's been thwarted by good saves in certain matches but, on the whole, Maddison hasn't yet developed that side of his game.

Maddison's game is very similar to Coutinho's pre-Klopp. He takes low-value shots – a lot of them – and can waste very good situations Leicester fashion.

He's also not finishing his perceived easier chances. Only 15 per cent of his efforts this season have been on target and he's underperforming his expected goals total by 0.70.

Players can hone their game and there’s no reason the Leicester No.10 won't mature. He works hard according to those at the club and is constantly looking to improve.

Furthermore, alongside elite-level players, which would be the case in the majority of top-six teams, Maddison may feel he doesn’t need to shoot as often from distance. And those efforts from 18 yards or further will be replaced with passes into the area.

But signing Maddison, in his current guise, isn’t the wisest way to spend north of £80million.

Another season with the Foxes will help clubs decide whether he’s got it – namely a sustainable goal and assist output – or whether he’s a joyful yet slightly flawed creator who is at the right level.