Every so often, a player comes along who looks like being the outstanding talent in his generation. Pelé, Diego Maradona, Lionel Messi, and Cristiano Ronaldo, all dominated in their own era. For England, Tottenham Hotspur transfer target Jadon Sancho, could be this century’s player.

Not to put too much pressure on the youngster, but in this summer’s Under-17 European Championship, he finished with five goals and five assists as England were beaten by Spain on penalties in the final.

The Manchester City prospect was named as Player of the Tournament, and there’s little doubt he was head and shoulders above anyone else there.

Ever since the 2002 edition, UEFA have picked out their Golden Player award, Wayne Rooney was the first, with the likes of Miguel Veloso, Cesc Fàbregas and Toni Kroos have all collected the award.

That’s not to say everyone with the award is a success, ask Nuri Sahin, Bojan Krkić or Connor Wickham. All professionals in their own right, but nowhere near being thought of as an exceptional talent.

Sancho looks different. Beautifully balanced, with exceptional touch and control on the ball. In his own age bracket, no one looks capable of stopping him.

Most times, when he loses possession, it’s because he has tried to take on too much. Yet, when you watch him skip past helpless defenders, you can’t blame him for trying.

There is a self-awareness though, when he made the jump up to the Under-23s, who play in the Premier League 2, he wasn’t as quick to run down blind alleys, or attempts to take on four, five players at a time. He’s still looking for those opportunities and get his head up to pick a pass. 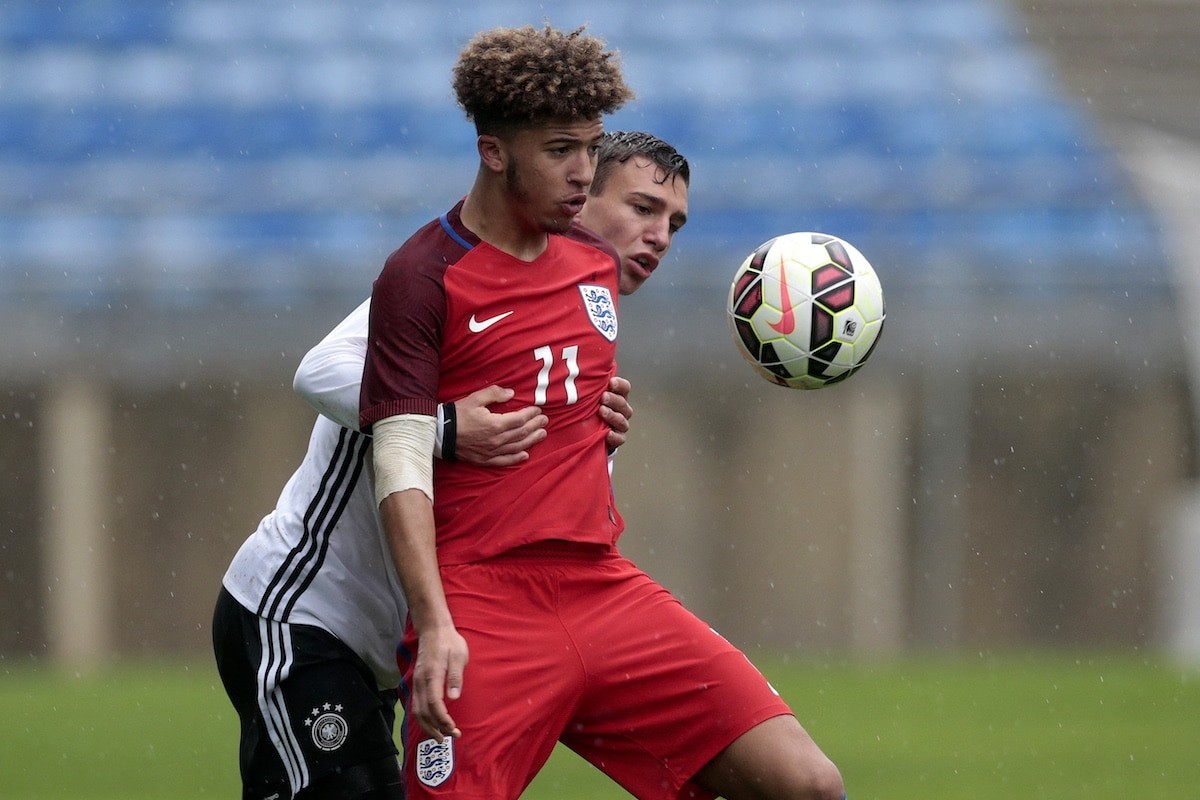 It is perhaps that understanding of his own ability that has created this current dispute with City.

His youth contract is about to expire, but rather than sign the £30,000-a-week deal on the table – the highest the club have ever offered a youth player – he is stalling, and is now looking to leave the North-West.

At first, he was worried that the path to Pep Guardiola’s first-team seemed blocked, and you only have to look at the past few years and the number of players currently out on loan to see that’s a point worth worrying about.

However, things came to a head this summer, when after the youth tournament in Croatia, the Catalan coach didn’t pick Sancho for Man City’s tour of the United States.

Team-mates Phil Foden and Brahim Diaz were put on the plane, the former Watford youth player was not.

He took this as a slight, and has refused to join the youth squads for training at City’s state of the art football academy.

Arsenal were said to be early favourites, Reiss Nelson, Sancho’s best-friend plays at the Emirates, and with the Gunner appearing in his profile picture, that move seemed nailed on. 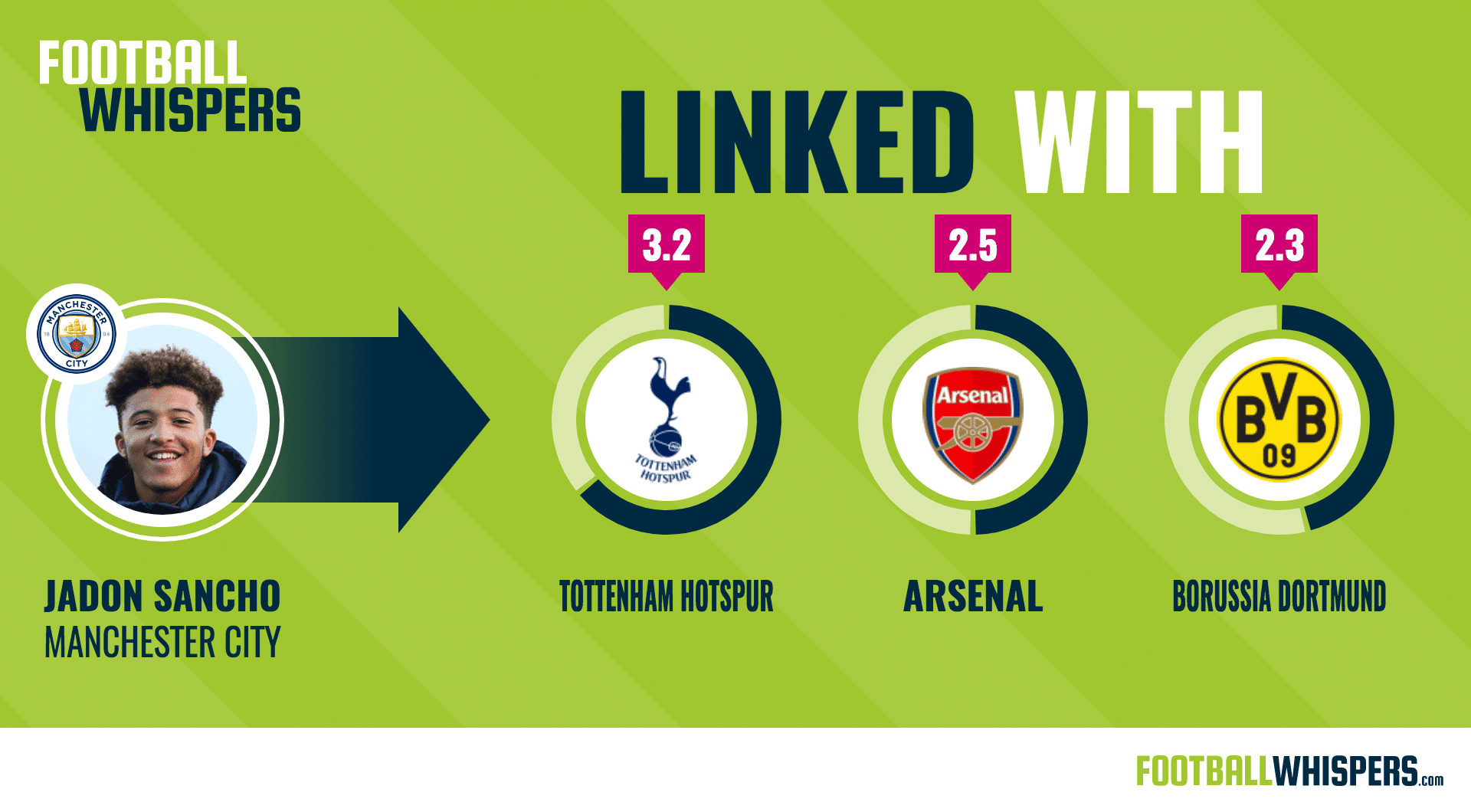 With a Football Whispers Index score of 3.2, Spurs are now the most likely team in England to land the youngster.

Doubts have crept in over Arsène Wenger’s ability to harness potential talent over the last few years. Looking at the promise of Theo Walcott and Chelsea transfer target Alex Oxlade-Chamberlain, you have to wonder what could have been.

However, across North London, Mauricio Pochettino has rightfully picked up a reputation for nurturing some promising youth players and turning them into world beaters.

There is a much clearer path into the Argentine bosses plans and that will more than satisfy Sancho’s demands.

Spurs would be picking up a player that just loves to beat defenders. As soon as he is in possession, the only thought in his mind is driving forward.

Playing on the left-side of the attack, he loves to cut inside on to his right-foot, but has the sense, pace and power to go on the outside. However, he is very one footed and it usually leads to the teenager checking back onto his stronger side to pick a pass.

When playing at his own age level, he is stronger, quicker, faster and more talented than anyone else on the pitch. He knows it too and it can often lead to Sancho taking the wrong option.

Yet, when he gets his head up, there’s little doubt he has the touch and vision to pick a pass. Either sweeping the ball wide to the opposite flank, or slipping in a team-mate. He has it all.

What strikes you, is how little he panics when in possession, regardless of the situation. Everything is done with composure, even in the tightest of spaces.

He loves to hit on the counter, and is deadly when receiving the ball around the half-way line with space to burst into. Something that Norway discovered to their peril this summer. 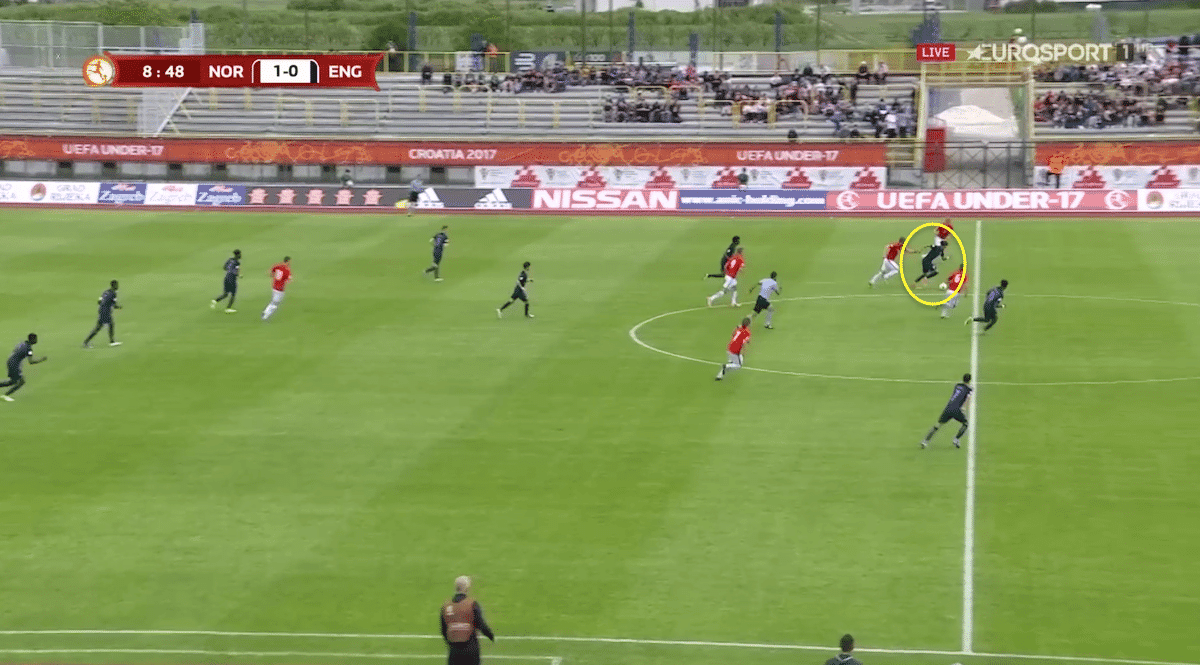 Starting in his own half, the Manchester City youngster sees daylight and pushes the ball out of his feet and is well on his way. No one can keep up and six seconds later he’s inside the opponent’s box. 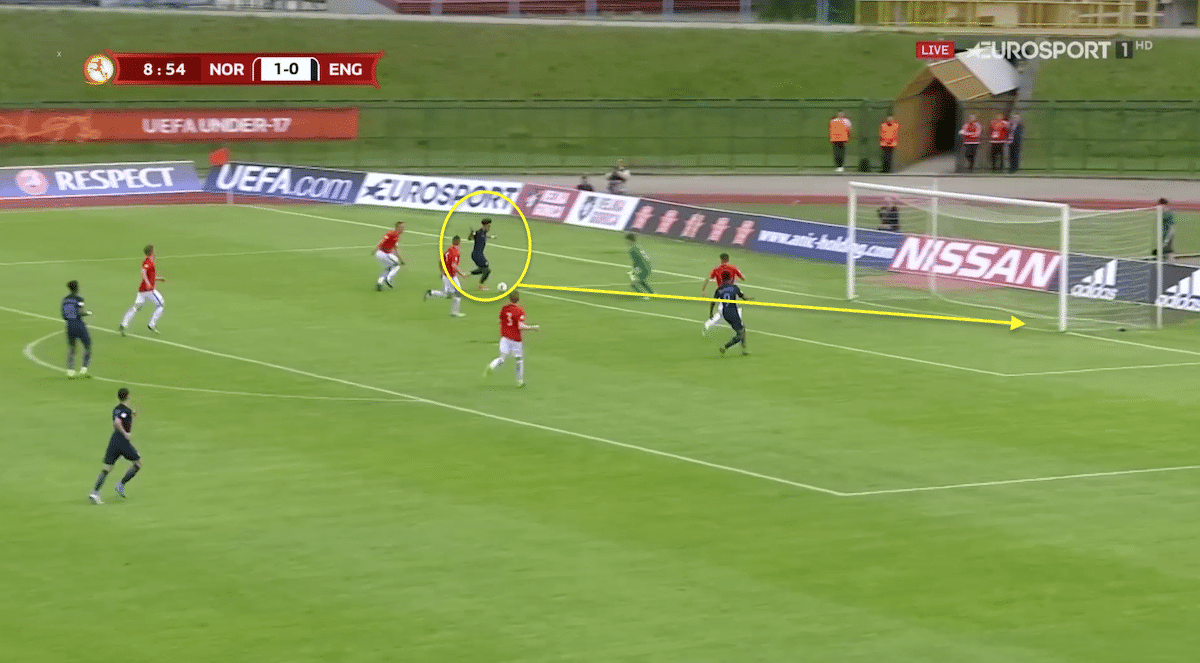 The only option on for the winger looks to be trying to find the far corner. The goalkeeper is coming out, his team-mates are covered and there’s no option for a cut-back. 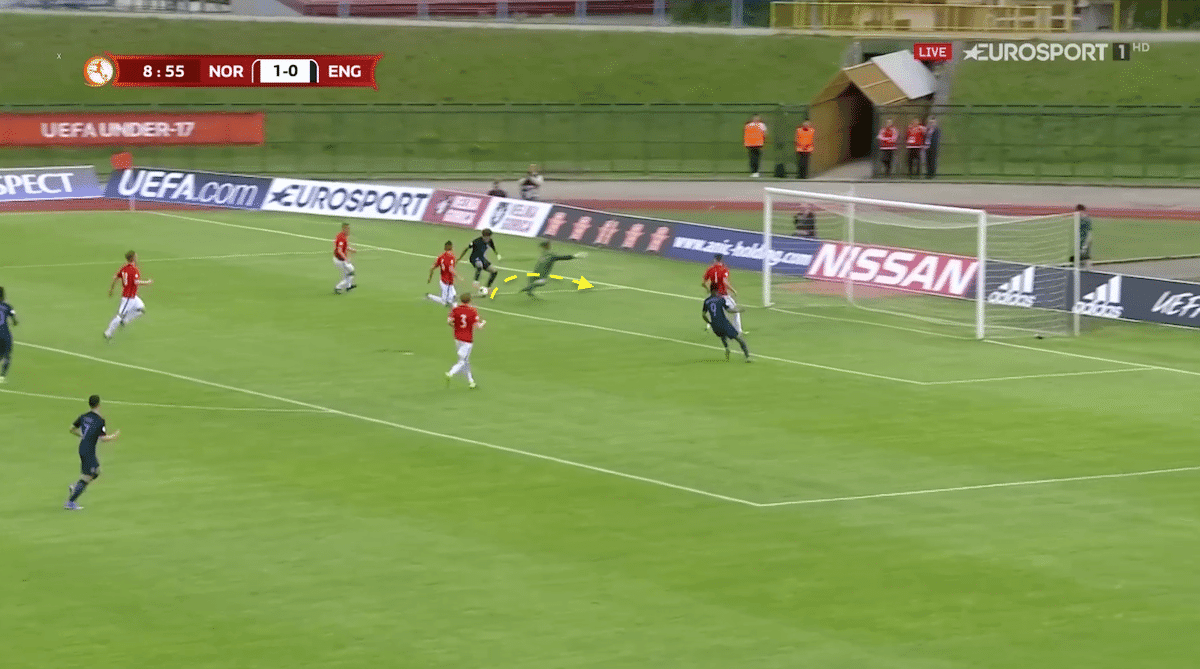 Sancho then rounds the keeper, taking his foot over the top of the ball and jinking to his left. This has the defence scrambling, but rather than go it alone, he picks his head up and spots Rhian Brewster unmarked for the tap in. 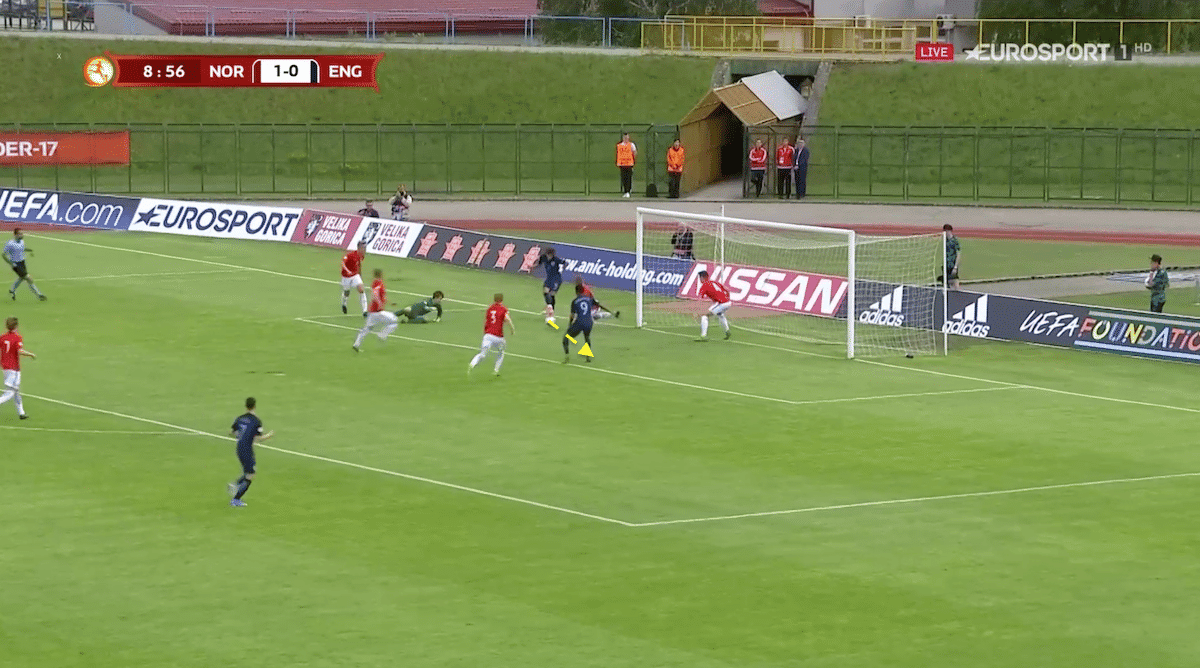 There have been comparisons made to new Paris Saint-Germain star Neymar, and it’s easy to see the similarities. Drifting in off the left-flank, he loves to come inside and beat players, attempt shots or defence splitting passes.

Deadly with the ball at his feet, just as you are figuring out what happened to the last defender, he’s already beaten another.

Sancho is the sort of talent that doesn’t come around too often. England recently have had the likes of Joe Cole and Raheem Sterling, but having a youngster who combines the technique and close control of the former Chelsea playmaker, with the blistering pace of the fellow City winger is something very rare on English shores.

The 17-year-old has it all, the speed with and without the ball, the ability to skip past defenders with ease and the drive and determination to keep going and continue to test the opposition even when it’s not going his way.

Even when he loses the ball, two minutes later he’ll be in possession, squaring up to another poor victim.

Now, you want to see him line-up against the older, stronger teams and City have done that, putting him in the Premier League 2 games, which is ultimately an Under-23 competition.

Starting away at Chelsea in February, against one of the best teams in the competition, he looked far from out of place, but there was more of a cautious approach to his game.

Still willing to take players on, he would see the chances of progression fading and give up the ball to someone else. That’s intelligent, that’s self-awareness.

That will partly be why he was upset at missing out on the chance to play for City in America, testing himself against Premier League stars.

His current unhappiness looks to be fuelling his desire to leave, but with both Arsenal and Spurs, it is easier to see a path from the Under-23s to the first-team. Pochettino is crying out for a player who can create something from nothing in the final third, Sancho ticks that box.

He may not jump straight into the starting XI, but there is space to win minutes off the bench and start some cup games. You just can’t see that at City under Guardiola with the millions of pounds of talent ahead of him.

Recently called up to England’s Under-18 squad, Sancho is undoubtedly one of the most gifted players of his generation and his rise is only going to continue.

That makes his next decision one of the most important he will make in his young career. Stay and try and force your way into Pep’s plan, or move to Spurs and become another young English talent dazzling under the guidance of Pochettino.