Just over a month ago, Jadon Sancho was hauled off after 36 minutes during Borussia Dortmund’s 4-0 loss to Bayern Munich. Manager Lucien Favre then proceeded to hang the former Manchester City academy player out to dry, stating the change was warranted due to the No.7 putting in a poor performance.

“He was not injured, he trained yesterday. I had to go on what I was seeing and, to be honest, it was not good enough.”

After speculation surrounding the 20-year-old’s future dominated the summer months it felt inevitable that Sancho would depart when the winter window opened. But the Bundesliga side now appear to be desperate to keep hold of the England international after a series of stunning performances. The club have told the versatile winger he must stay until the summer, and they’ve slapped a £130million price-tag on his head.

It’s been a remarkable turnaround for the one-time Watford youngster. Heading into that match against Bayern, Sancho had one goal and two assists in his nine previous outings for BVB. His early-season form, which saw him rack up five goal involvements in the opening three matches, had tailed off.

However, since returning from the November international break, the fleet-footed flyer has scored in seven consecutive matches across the Bundesliga and the Champions League. He’s also chipped in with five assists. He’s well on course to surpass the 26 goal involvements he managed in the German top-flight last term with 18 already to his name.

Sancho’s always been something of an output merchant. His debut Bundesliga season in the saw four assists and a goal in just 684 minutes. But he’s taken it to a whole other level over recent weeks. So, what has changed? 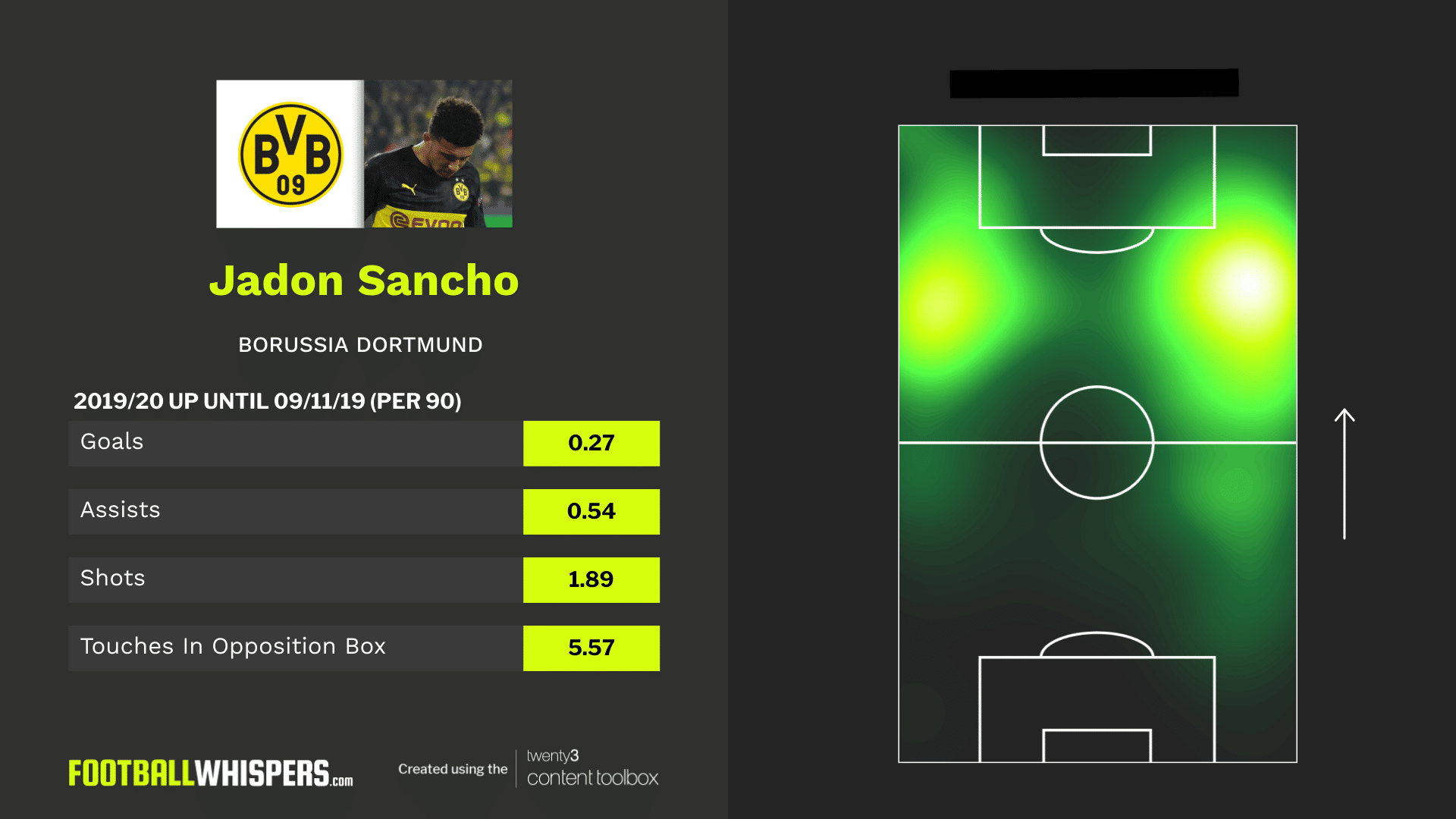 Up until the Bayern clash, Sancho was being used on both flanks but primarily spent his time on the right. He was averaging 0.27 goals and 0.54 assists, managing to once again outperform his expected numbers. The 20-year-old was having fewer than two shots per 90 and averaged 5.57 touches in the box.

On the surface, they appear to be solid numbers and the overperformance shows that, despite being in a bad patch, he was still managing to deliver.

However, it's when looking at his shot map that you get a bit more of a picture. 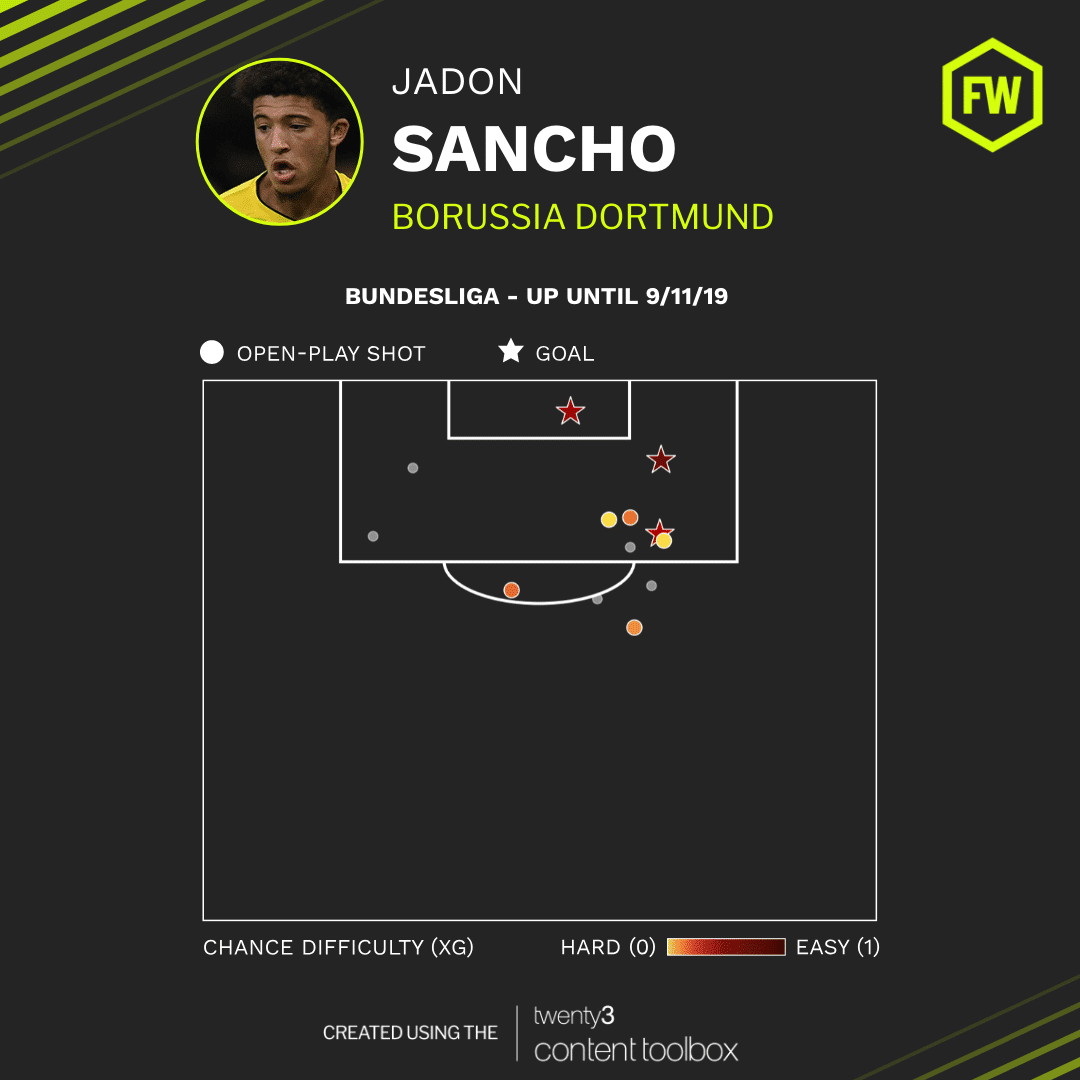 The graphic above shows Sancho's open-play efforts in the Bundesliga. A large number of those – 30 per cent to be exact – were taken from outside the area. These are all considered low-value efforts and are basically a waste of possession.

Since the game against the Bavarian giants, his shot map looks a little different. 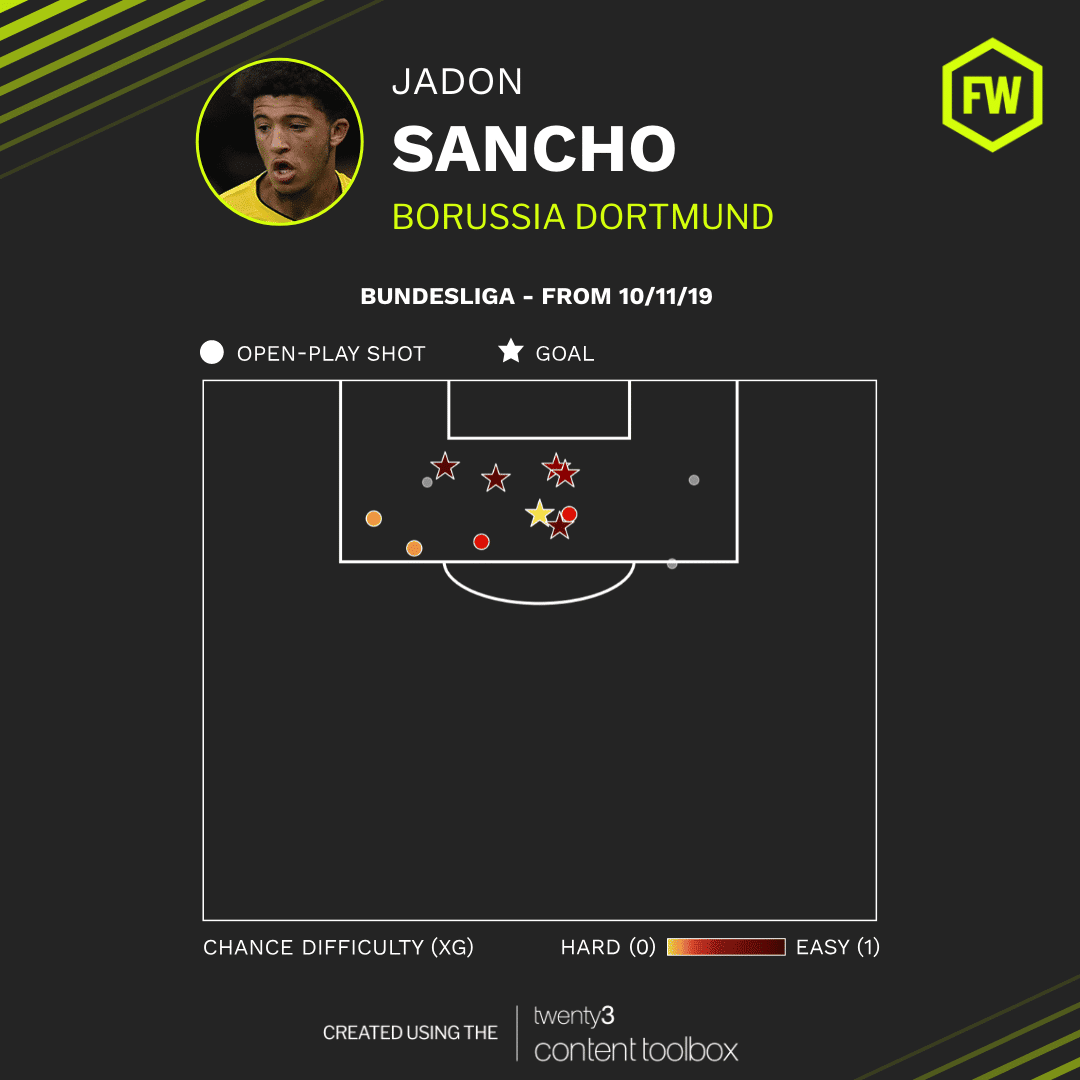 He's not taken an effort from outside of the box with just one shot coming right on the edge of the area. The majority of his chances now appear easier, with a clutch of his goals all coming from central positions near the penalty spot. That could explain why his output has dramatically improved.

The change in shot selection occurred when Favre started to use Sancho on the left side of the pitch. 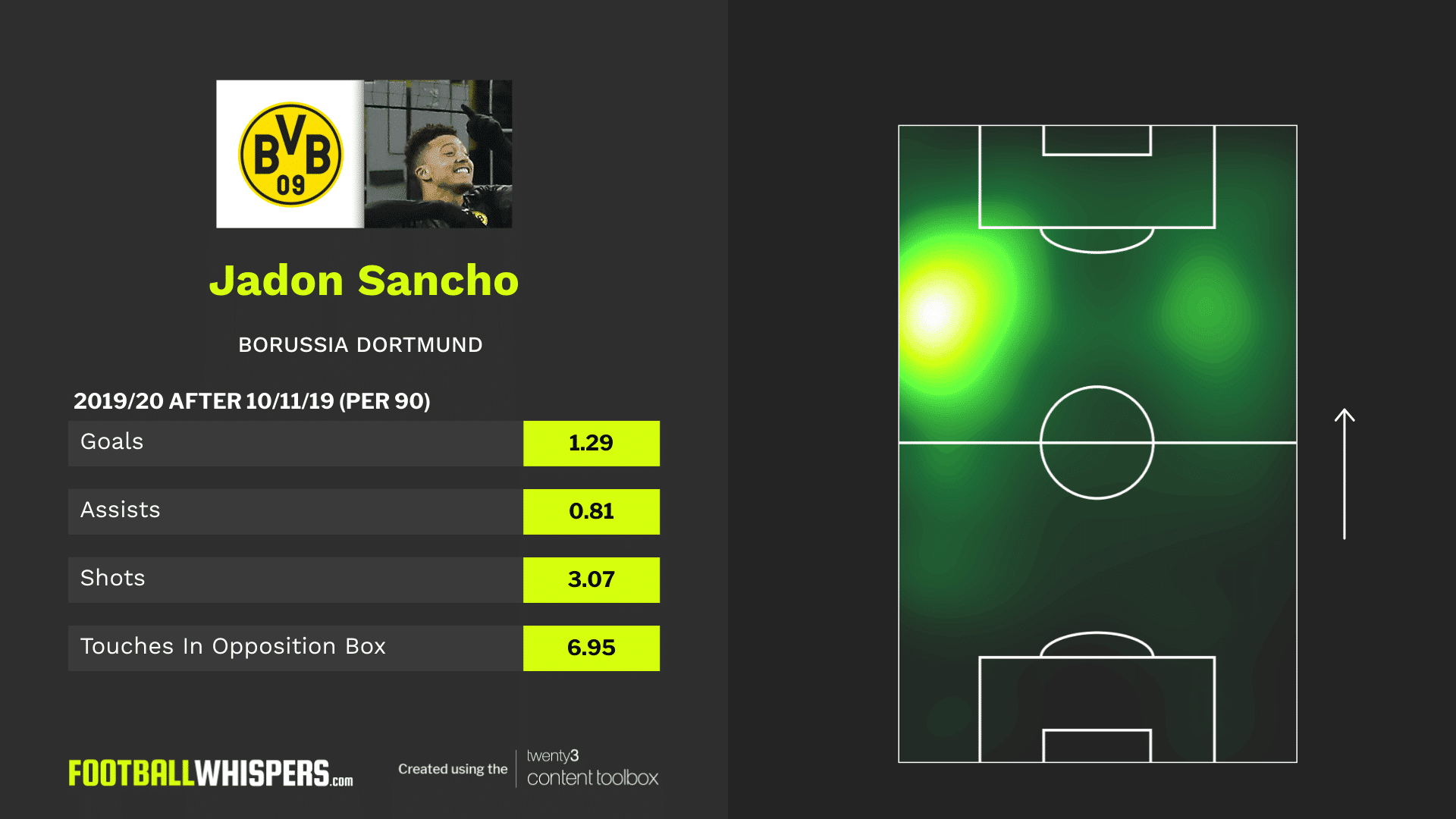 He went from being an orthodox winger to being an inverted forward. Sancho has responded to this change by becoming more dangerous than ever. He's now averaging 1.29 goals and 0.81 assists per 90. The sample size is much smaller, yes, but to manage this over even a seven-game period is remarkable. His shot output has risen from 1.89 to 3.07 and he's now having more touches in the box than before.

On the right, Sancho is a creator. On the left, however, he's a goalscorer. His ability to wriggle into goalscoring positions is something teams will be intrigued by. Until recently there was doubt over whether or not he could enter that top tier of wide forward, the sort to hit 20 league goals in a single season. But performances over the past month suggest, in the right system at least, he can certainly do that.

The Sancho story is also the perfect case study to highlight why so many managers now prefer using wingers on the opposite flank to their preference. Being able to cut inside gives them more of an opportunity to get a shot off with their stronger foot. The BVB winger was hardly limited on the right but when comparing shot maps the impact in what the position change has done is clear for all to see.