It's the sheer speed at which Jadon Sancho operates that really stands out when watching the 18-year-old in action for Borussia Dortmund.

Yes, he is blistering quick. A winger capable of turning defence into attack in mere seconds. But that isn't what makes him special. After all, there are countless players for whom pace is their main attribute.

The difference between Sancho and many of his contemporaries is the speed of thought he possesses. His ability at such a young age to consistently play the right pass or make the right run is rare.

And yet he isn't a starter for Dortmund. Instead the England Under-19 international has been used as an impact substitute by BVB boss Lucien Favre in the Bundesliga this term. To devastating effect.

“The opposition know we have a real weapon in action as soon as Jadon enters [the field],” Dortmund captain Marco Reus said after Sancho's 22-minute match-turning cameo against Bayer Leverkusen. “We are glad we have such an ace up our sleeve.”

Favre's use of Sancho this season is undoubtedly paying off. The former Manchester City youngster has only played 124 minutes of Bundesliga action yet leads the assist charts across Europe's top five leagues with five.

Yet that isn't even the most impressive statistic. Incredibly, since he arrived at Dortmund in the summer of 2017 he has been involved in a BVB goal every 73.5 minutes. It's an output no other Bundesliga player with ten or more appearances in that time can match, not even the prolific Robert Lewandowski.

So the big question: why isn't Sancho, who started his career with Watford, starting every week given his impact on the side?

“Obviously I don't want to be a sub,” the Englishman admitted after the win against Leverkusen. “But if I keep on working hard hopefully I can get in the starting XI.” 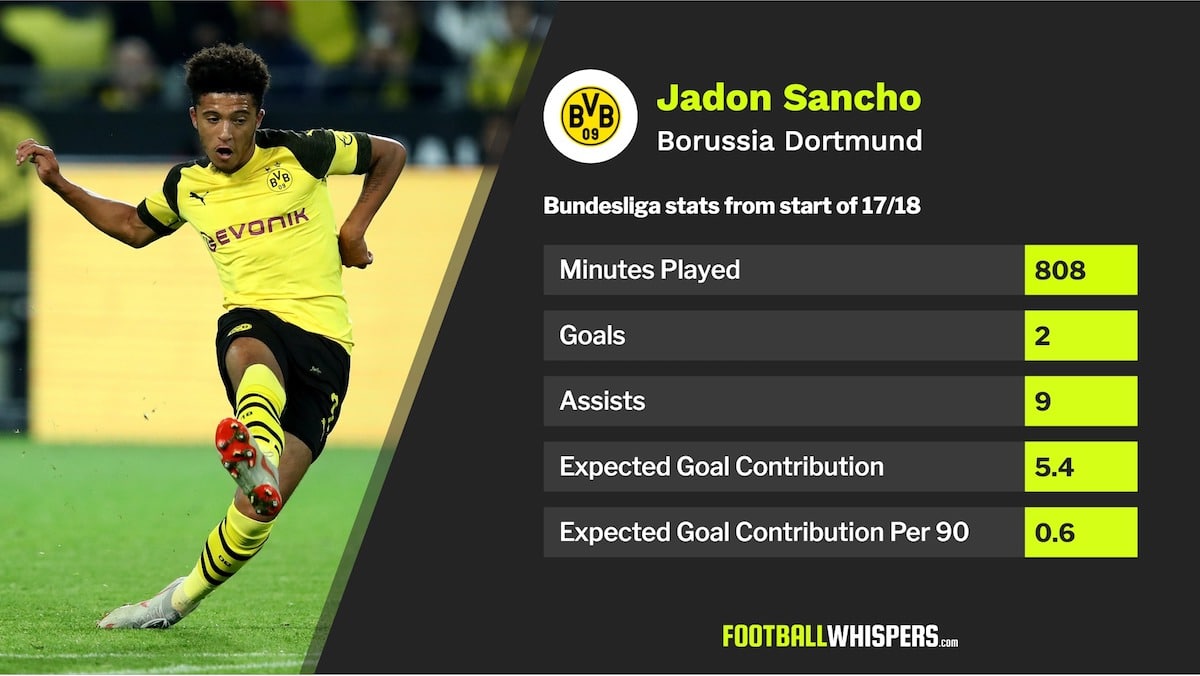 The challenge for Sancho is to get ahead of either Jacob Brunn Larsen or U.S. superstar Christian Pulisic. But both are also impressing this term. The former has struck twice and has an assist to his name while the latter has also netted on on two occasions and created a goal.

With Reus also in sparkling form – four goals and four assists in six Bundesliga matches – and Maximilian Philipp also in the squad, Favre has bountiful options to choose from in attack. And given BVB lead the early table, it's hard to argue with his use of Sancho so far.

However, as the season progresses Sancho should get his opportunity in the starting XI, and his connection with Reus means it wouldn't be a surprise to see him in action in Dortmund's most high-profile fixtures.

Their on-field understanding was never more evident than against Leverkusen, with the duo dovetailing up the pitch to score a picture-perfect counter-attacking goal and level the game for Dortmund.

Jadon Sancho is so, so special.

What an assist just SEVENTY seconds after coming on as a sub for Dortmund. Incredible counter-attack.

The hype is real 🔥 pic.twitter.com/jeGbhxahyh

That goal was the second the England youth international has teed up for Dortmund's captain this season; the other coming in Die Borussen's 4-1 win against RB Leipzig on the opening day of the season.

Such a partnership can be difficult to harness, especially given the lack of regular game time the youngster has had. Yet for Reus and Sancho it comes naturally.

“We have a special connection,” Sancho explained “He reads me, I read him, and he's taught me a lot of things.

“He taught me to be mature on the ball. At first, I wasn't but he told me to be calm and just play my game. That helped me a lot. He's a great player and I'm so happy I'm playing with him.”

Inevitably Sancho's form has led to speculation about a senior England call-up – Gareth Southgate is all about giving young players a chance, after all. But given he's yet to start in the Bundesliga this season, it would be premature.

At this point, Sancho doesn't need pressure put on his young shoulders. As Europe's assist king, he deserves the opportunity to sit on the throne unburdened.