It was inevitable. After making a number of very early signings, Borussia Dortmund would have to start trimming their squad. According to reports, the cull could be about to get underway.

He impressed during pre-season – scoring against Liverpool in the International Champions Cup – so much so that the club signed off on loaning World Cup winner Andre Schürrle to Fulham.

The one-cap Denmark international appeared to have a bright future at the Westfalenstadion but with the arrivals of Julian Brandt and Thorgan Hazard, his path to the starting XI has just become somewhat trickier.

The Bundesliga runners-up already have Marco Reus, Jadon Sancho and Maximilian Philipp capable of playing wide. Keeping Bruun Larsen when there’s interest in him does not make business sense.

With Arsenal and United reportedly open to paying close to £20million for the former Lyngby youngster, now might be the ideal time to cash in on him.

But what would Bruun Larsen bring to the table? And is he suited to the rigours of the Premier League? 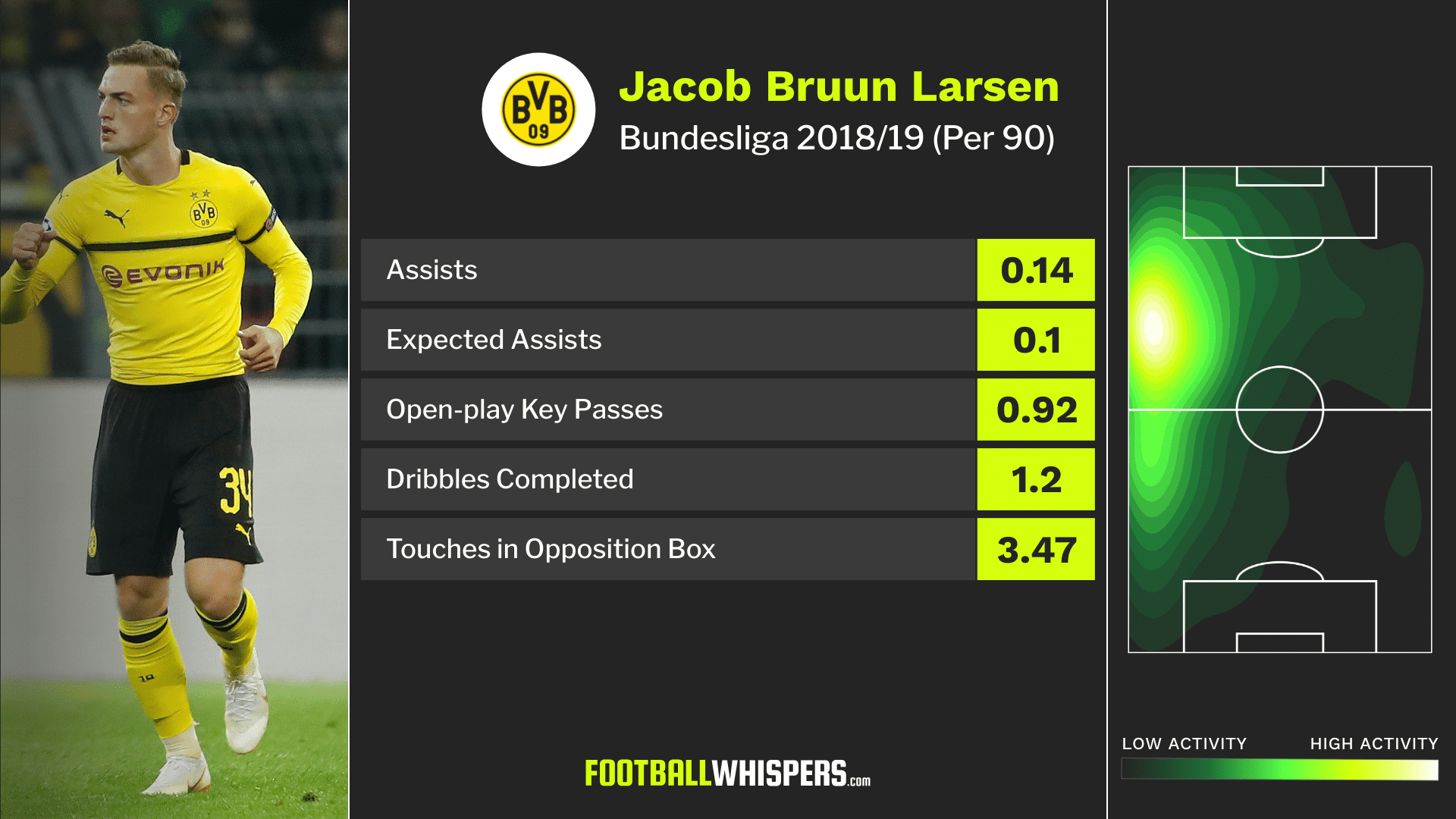 The Dane, in many ways, is quite unique. Deployed on the left of the attack, he's always looking to drift infield onto his favoured right foot like many other modern-day wide forwards. But standing at a little over 6ft, he's got the physical presence of a more traditional centre-forward. There's a bit of Marko Arnautović about him in that sense.

He's good in the air, winning 50 per cent of his duels, selfless when not in possession and has the necessary work rate to play in an organised team. For example, last season he won possession in the defensive third on 1.6 occasions per 90. He regained the ball 2.05 times in the middle third in the Bundesliga.

Bruun Larsen gets into the penalty area, too, as evidenced by his 3.47 touches in the 18-yard box – but he's not yet a reliable goalscorer. Last term he averaged just 0.14 goals per 90 despite having an expected goals average of 0.31.

He might get into dangerous areas but he's not yet composed enough to finish off his chances with great regularity.

However, that is likely to improve with age. The positive to take is that in over 1,270 minutes of play, his expected goals average was fairly impressive. It shows he knows what runs to make and how to carve out opportunities.

While Bruun Larsen is not yet a creative force either, the potential is there. He averaged 0.14 assists last term with an expected assists average of 0.10. He played fewer than one open-play key pass on a per 90 basis but did complete 1.2 dribbles.

Those numbers paint the picture of a player still developing his game which is to be expected. Bruun Larsen isn't a maestro in possession and he isn't a player you want to build an attack around. But he is a progressive and probing wide player who can make things happen in important moments; he'll beat a man to create space and is a confident dribbler inside and outs.

The 20-year-old would be effective in a counter-attacking team or one that likes to press high up the pitch. His desire to get into goalscoring areas lends itself to that, too.

But he's not yet a ready-made first-team star.

He could be a useful squad player and for £20million there's little to no risk. But he could do that job at Dortmund. Convincing him that his development would be better served elsewhere will be the toughest task for any interested club.

That said, his raw talent makes him an intriguing prospect and many of his traits are ones that will see him thrive in the physical Premier League.