After losing a defender widely regarded as one of the best in the Premier League for £75million, Southampton were expected to splash the cash and bring in a replacement for Virgil van Dijk. But they did not.

Despite the Dutchman officially departing the South Coast on New Year’s Day, Saints’ only January arrival was forward Guido Carrillo, with the backline not being strengthened at all.

But with van Dijk struggling at the start of his Liverpool career – the Reds have failed to keep a clean sheet when he’s played – Southampton don’t seem to miss him at all.

And that’s largely down to Jack Stephens. The 24-year-old defender’s not only been impressive at the back, but he’s replicated the Dutchman’s scoring prowess too. His three goals in his last three games have helped Mauricio Pellegrino’s side extend their unbeaten run to six matches.

With Liverpool visiting St Mary’s this Sunday, Saints will be keen to show their former player they don’t miss him. And Stephens will be key in doing that.

His success since van Dijk’s departure hasn’t surprised his current boss, though.

“Jack’s a natural, obviously,” Pellegrino told the Daily Echo. “The passion is really important but to work every single day in training and you need passion to react well in difficult situations.

“Without the passion and character it is difficult to play at this level.”

And that passion was clear when Stephens was speaking after the 1-1 draw with Brighton and Hove Albion, where he scored an equaliser.

He said: “There’s no point getting a big three points then going on losing or drawing.We need to use this to push on and get out of the position we’re in.

Van Dijk was a leader for the team – in fact, he was club captain. While Stephens is not skipper, he can show his leadership skills from the back, like his former team-mate did.

With Southampton in a relegation battle, they need players to stand up and be counted, and undoubtedly the 24-year-old will.

The fact the Saints have only kept one clean sheet in their last 17 games has to be addressed but, with Maya Yoshida’s poor form before Christmas and Jan Bednarek’s lack of English football experience, Stephens is the best option they’ve got to replace van Dijk and play alongside Wesley Hoedt.

But he’s impressing Pellegrino. “Hopefully he can continue with these performances,” he said after the Brighton match. “Yes, he’s young and there was a lot of competition with Virgil, Maya, Jan and Wesley,” added Pellegrino.

“All of them have shown they can play.”

But how does Stephens compare to van Dijk? We’ve crunched the statistics to see how he compares.

Truth be told, it’s not too comparable just yet, but there’s also a reason why the Dutchman went for £75million – he became one of the league’s outstanding defensive talents while at Southampton. 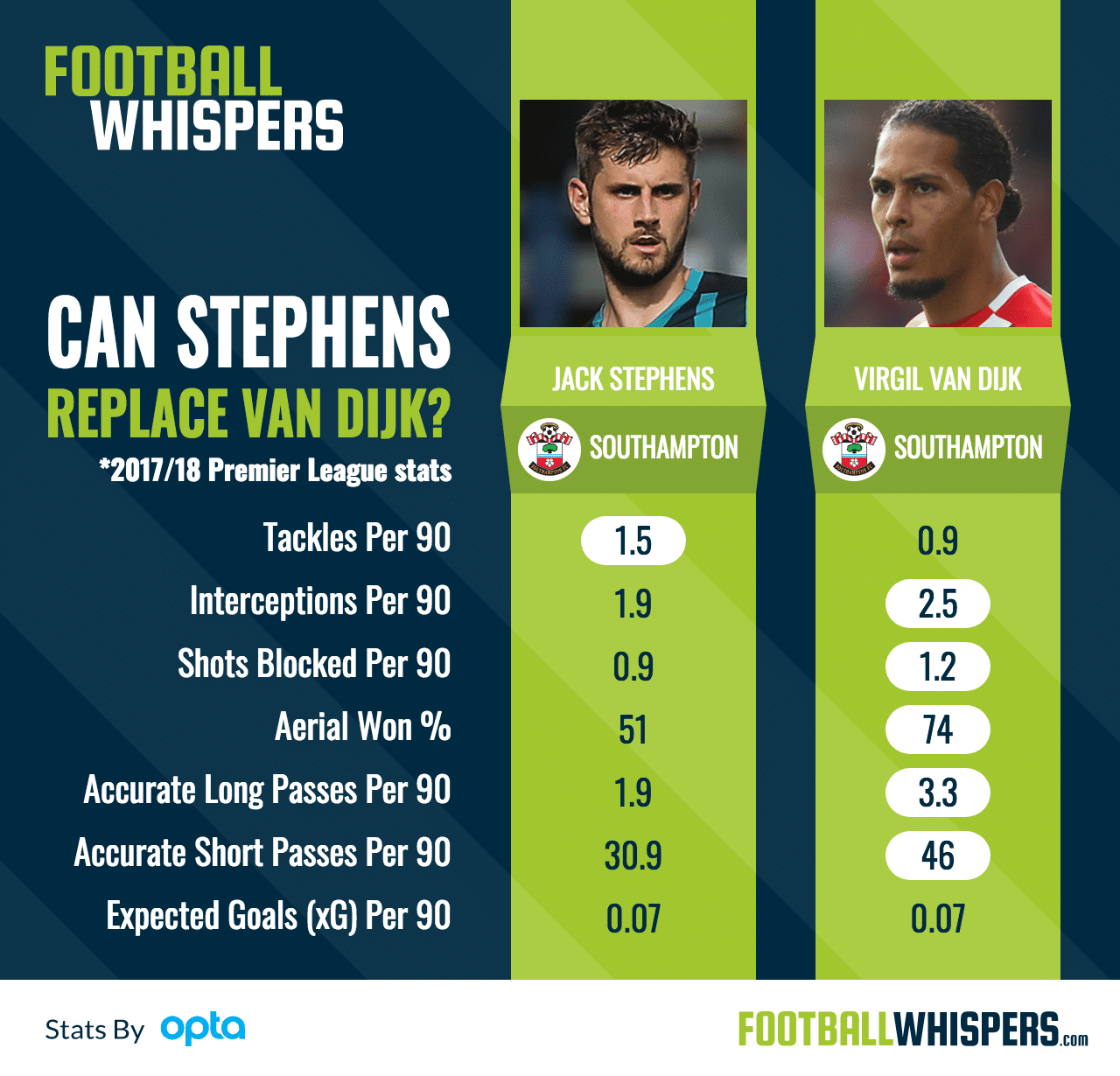 In terms of tackles per 90, Stephens makes more than van Dijk did while still a Saints player this season (1.5 to 0.9).

But in terms of interceptions (2.5 to 1.9) and shots blocked, it was the now Liverpool man who comes out on top.

A key part of van Dijk’s game is his passing ability. The Dutchman is known for his aptitude at picking out long passes due to his great technical ability.

His average of 3.3 accurate long passes per 90 minutes is pretty impressive. Stephens is yet to replicate that at just 1.9.

In fact, Southampton’s No.5 isn’t as comfortable or as involved with passes as his defensive predecessor.

Stephens also makes considerably fewer accurate short passes – 30.9 per 90, compared to van Dijk’s 46 when he was at Southampton. The Dutchman has since increased that to 60.5 at Liverpool.

Another crucial part of van Dijk’s style at Southampton was his dominance in the air. He won an impressive 74 per cent of his aerial duels at St Mary’s this season. So far, Stephens is considerably below that at 51 per cent.

But despite that, the former Saints captain was known for popping up in the opposition box and scoring crucial goals. That isn’t usually a job for a defender, but it’s interesting to note both of them have the same expected goals (xG) value per 90 – a relatively low 0.07.

Looking at the statistics, it suggests that Stephens is some way off replicating van Dijk at the moment. That’s no surprise though, as there’s a reason one is a £75million defender and the other is an uncapped 24-year-old with just over 30 Premier League appearances.

However, Stephens has stepped up for Southampton since the Dutchman’s departure and three goals in his last three games show he’s ready to step up for the side when they need him.

With the transfer window closed, Saints will have to do with their current options in their backline.

At the moment, Stephens is winning the race to partner Hoedt and has until the summer to prove that they don’t need to splash out on a centre back with the cash raised from selling van Dijk. If he carries on like he is, and uses his game time to improve, they may not need to spend big at all.