The stars of Sheffield United‘s incredible first season back in the Premier League are well-known. John Lundstram, John Fleck and Dean Henderson have rightly been showered with praise. But Jack O'Connell has gone under the radar.

Unlike Lord Lundstram and Fleck, the centre-back hasn't been racking up Fantasy Premier League points. And, unlike Henderson, he won't be returning to Manchester United to put pressure on David de Gea next season.

But that's not to discredit the 25-year-old Liverpudlian. He is one of Chris Wilder's now-famous overlapping centre-backs and part of the second-meanest defence in the Premier League, having conceded just 23 times this season. Clearly someone has been taking notice.

That someone is Tottenham Hotspur boss José Mourinho. According to reports, O'Connell is being lined up as a replacement for out-of-contract defender Jan Vertonghen.

Unlike defensive partner Toby Alderweireld, the Belgian is yet to sign an extension with the North Londoners, meaning he could come to a pre-contract agreement with a foreign club and leave Spurs for nothing come the summer. 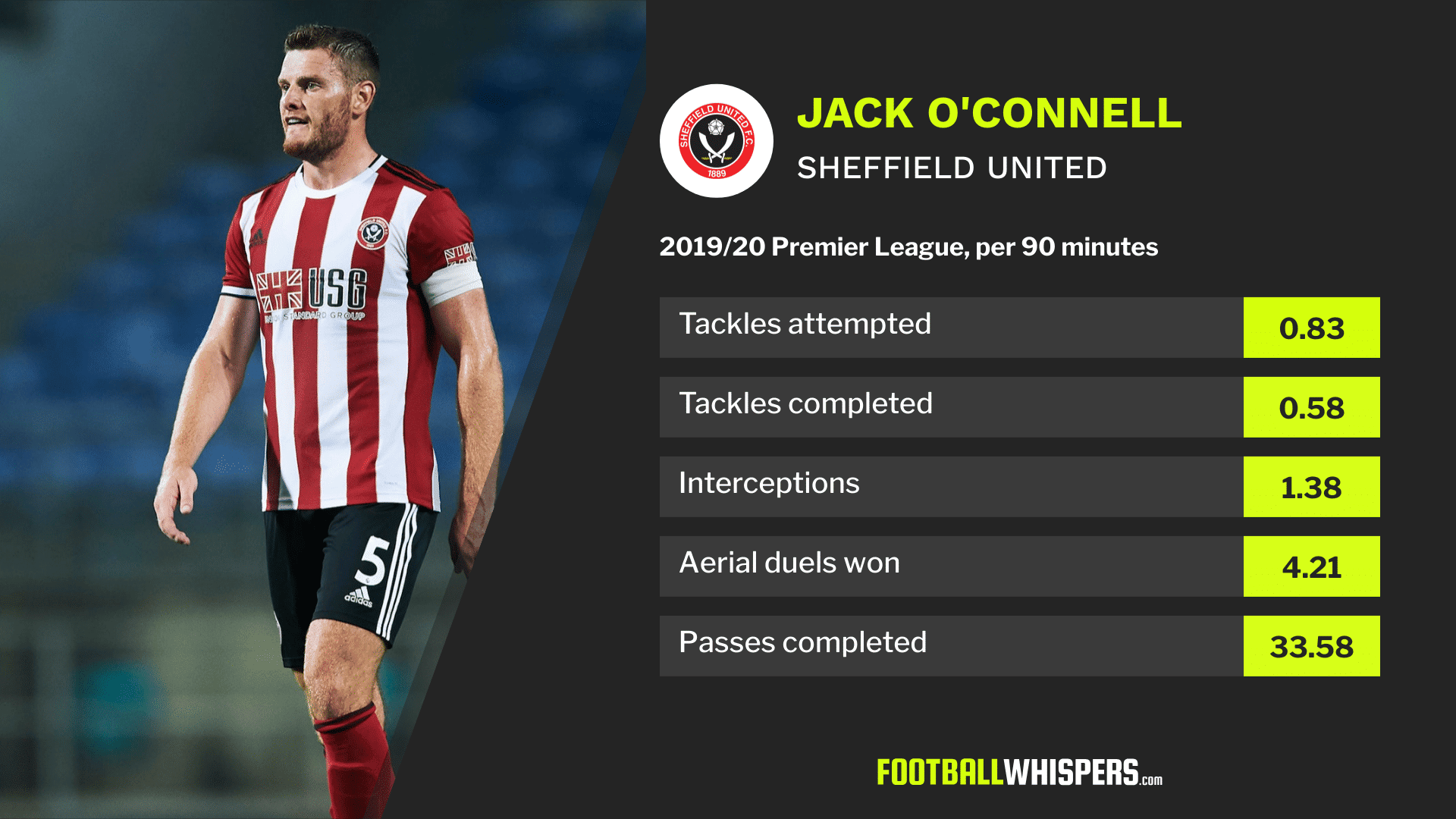 Blades boss Wilder is all-too-aware his squad could be ripe for picking by bigger clubs but hopes to hang onto one of the stars of United's remarkable season. “It’s always a moving market,” he said.

“Players will be coming in and I can’t sit here and say none of my players will move on – ones we don’t want to move on.

“That’s how football is and you always have to be ready and quickly react to any business that happens – outs or ins.”

O'Connell has already signed a contract extension at Brammall Lane this season, taking him through to 2023. So whatever happens, he won't be prised away cheaply. Not least because he is a fairly specialist centre-back, recruited for and then moulded to play in Wilder's back five.

For the uninitiated, the Blades' overlapping centre-backs are exactly what they say on the tin: central defenders who bomb on like traditional full-backs or wing-backs. They either create two-v-one situations out wide or allow wing-backs George Baldock and Enda Stevens to drive inside and flood the central areas of the pitch.

We can see this part of O'Connell's role in his heatmap (below) which shows a high volume of activity up the left-hand side of the pitch for the 25-year-old – akin to that of a full-back. 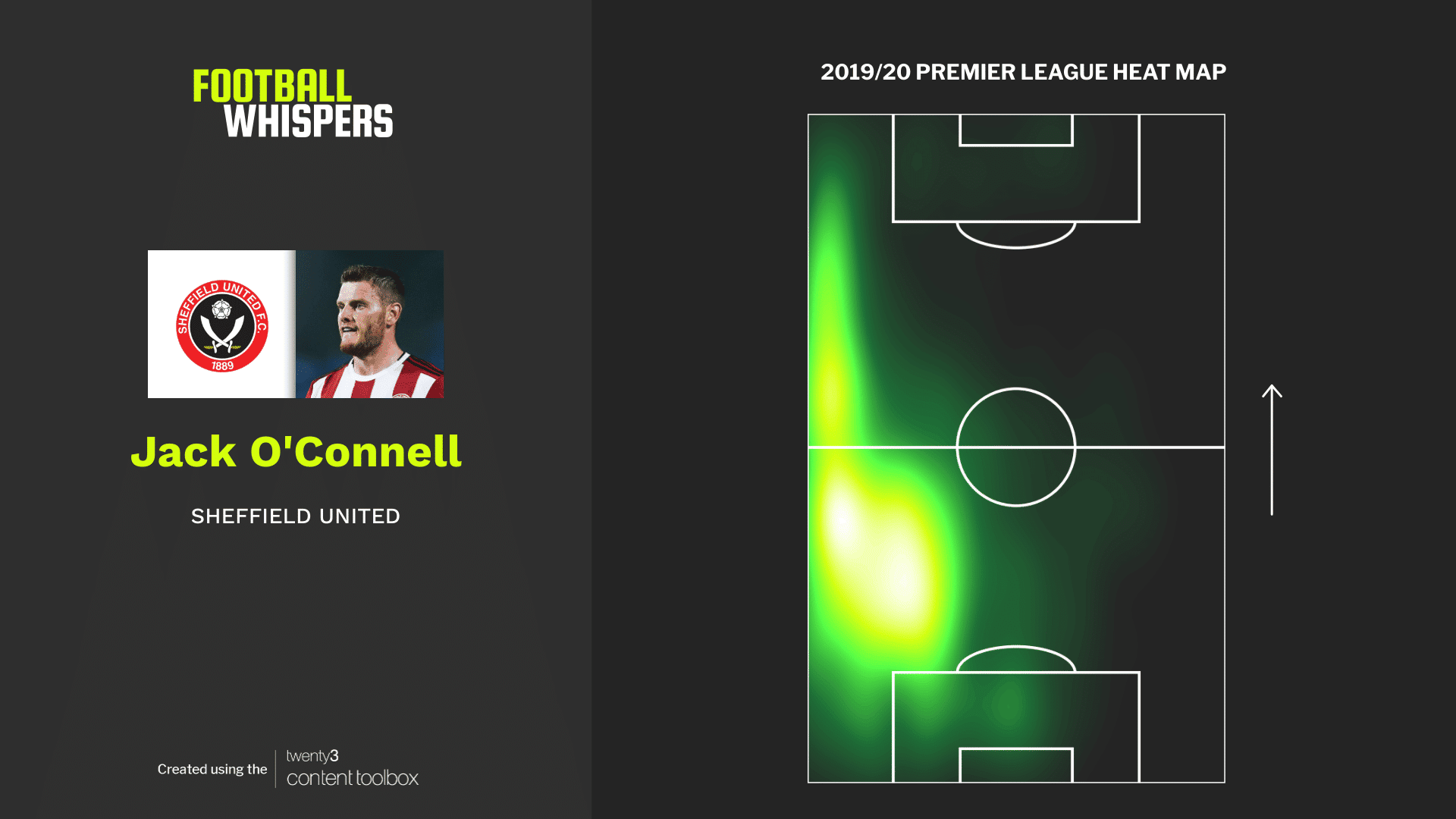 As a result, O'Connell has attempted the second-most crosses per 90 of any centre-back in the Premier League this season with 1.29. Only Bournemouth‘s Simon Francis can beat that figure (1.94), but the Cherries captain has played at full-back too.

O'Connell completes 0.17 crosses per 90, the sixth-most of any Premier League defender to have played in at least 20 per cent of available minutes this term. Being confident carrying the ball out is another important part of the former Rochdale and Blackburn Rovers defender's role, and O'Connell completes 0.25 of the 0.54 dribbles he attempts per 90.

Brian Barry-Murphy, O'Connell's manager at Rochdale, is not surprised by his former charge's meteoric rise. “We just couldn’t hold him back,” Barry-Murphy told The Sportsman<. “He was just going beyond what a normal centre-half would do.”

As well as doing some of the fancier stuff, O'Connell does the basics well. He is a strong, aggressive, no-nonsense defender who reads the game well. O'Connell only attempts 0.85 tackles per 90 but wins more than 50 per cent (0.58) as well as recording 1.38 interceptions.

The question now is whether he is ready to make the step-up to a side expecting to make the top four on a regular basis. Sheffield United's £1million acquisition of Nottingham Forest left-sided defender Jack Robinson – who can also play inside at centre-back – suggests Wilder might already be preparing to lose one of his most important players, be it in January or the summer.

Comparing O'Connell's numbers directly to Vertongthen's is pointless. The two play for teams with different ambitions who, despite competing for European football against all odds, play in entirely different systems practising different styles of play.

One thing that's worth pondering, though, is how Mourinho would feel about one of his centre-halves galavanting upfield to support the attack. The Portuguese is famed for his defence-first mentality and tactical rigidity.

His best teams have been built around the likes of John Terry and Ricardo Carvalho. Perfectly good on the ball, but defence-first defenders. The idea of O'Connell coming to Tottenham and playing the way he has done for the Blades seems fanciful at best.

Given what Barry-Murphy said about the former Dale defender, is that a recipe for disaster? O'Connell has thrived in a system built for a defender of his near-unique specifications. It would be a shame to see Mourinho beat that out of him.