Jack Grealish made a name for himself with his socks rolled low and his hair combed high in 2015. He was a silver lining of hope for Aston Villa fans against the dark cloud of a last-place finish and relegation from the Premier League.

Now he is being talked of as a Tottenham Hotspur transfer target, possibly as someone to potentially replace Mousa Dembélé.

Moving from the West Midlands to North London won’t be an exact drag and drop, given that the 22-year-old plays higher up the field, and as such their stylistic output looks very different from last season.

However, they share some similarities. Both are prodigious dribblers, completing between three and four per game on average, and Grealish even posts decent defensive numbers.

Grealish made 2.35 tackles and interceptions per 90 minutes, hovering around the top quarter of attackers in the Championship in terms of this defensive activity. Part of it may be role dependent, but you’ve got to be willing and capable of pitching in, and it seems that Grealish is.

He combined this, last season, with helping out the attack a good deal. Grealish led the league for open play key passes per 90 minutes (2.11) and was in the top 30 percent of attackers for attempts on goal (2.62).

It’s an eye-catching all-round skill-set for a player to have, and it’s not surprising that clubs like Tottenham are interested in him. But would he be able to fill a Dembélé-sized hole in the Spurs midfield? 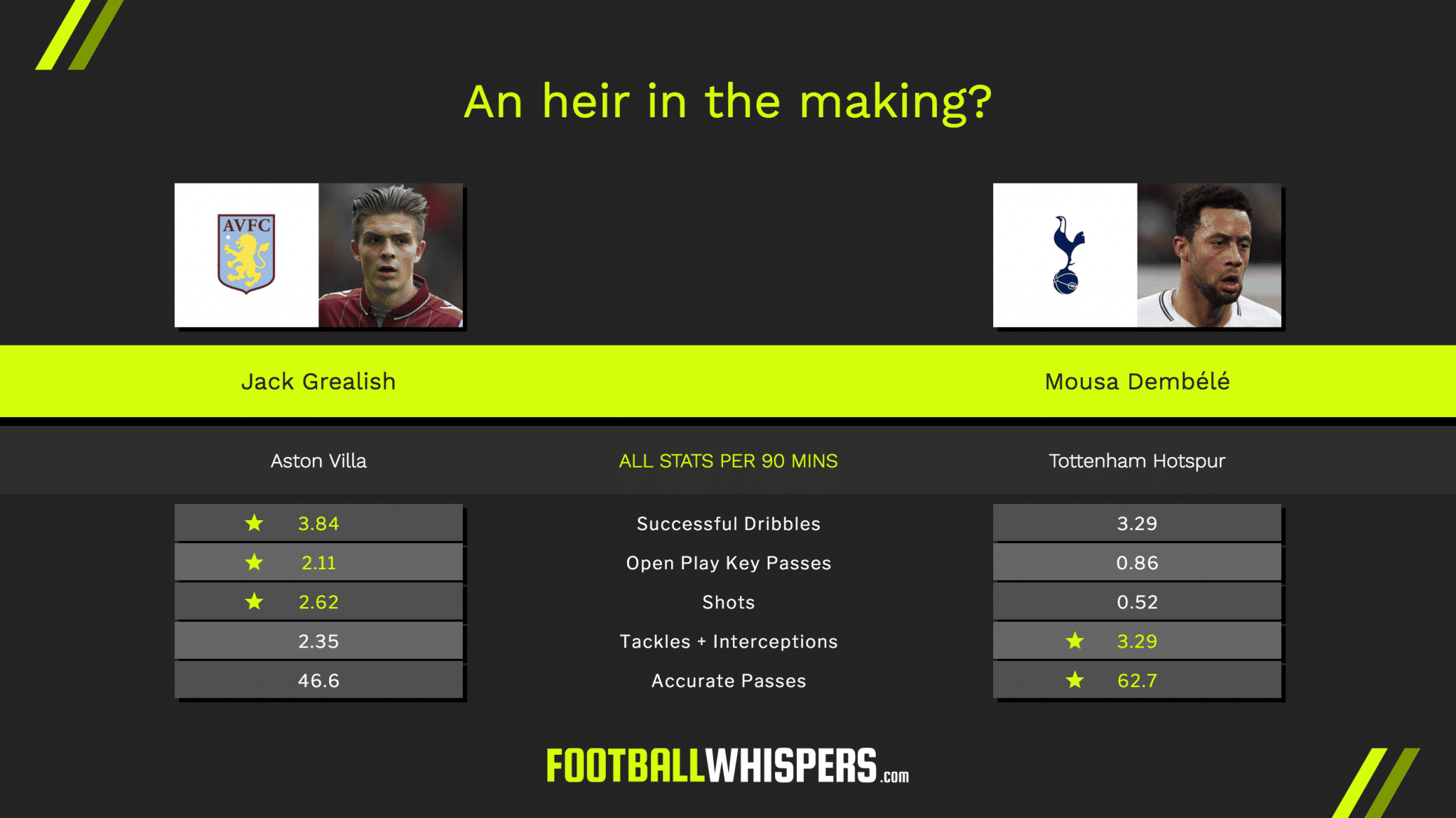 Part of Dembélé’s skill-set is the fact he’s so difficult to push off the ball in tight midfield spaces, and while Grealish is no pushover, nor is he, well, Dembélé. He seems more likely to aim to win a foul than to hold off an opponent, and in some ways this is reminiscent of Jack Wilshere.

To properly act as back-up, or a long-term heir, for the Belgian, Grealish would need to prove that he can be a metronomic presence behind other attacking players. With so many attacking midfielders, another primarily forward-minded player isn’t exactly what Tottenham need right now.

His range of passing – not so much in the ‘Spanish’ meaning with long diagonals, but in terms of the variation of passes he can do on the fly with his right boot – is good though and a promising base to work from.

As their persona radars suggest, Grealish won’t be an exact like-for-like replacement for Dembélé who Spurs fans seem to fear might be on his way within the next year or so. However, alongside a more regular defensive and build-up passing player, he could bring a lot of what a team needs in their central midfield.

It would be an interesting buy, rather than one that could definitively be called ‘good’ on the face of it, but ‘interesting’ can sometimes be the best approach.