When Jack Grealish returned from a three-month injury layoff in early March, Aston Villa were 14th in the Championship. Their season had been plagued by inconsistency, unable to string together a run of victories.

Now, though, Villa sit fifth. They have won ten league games in a row and promotion – via the playoffs – seems a real possibility. At the heart of their impressive resurgence, their dramatic rise up the table, has been Grealish, who returned from injury determined to make an impact.

It began with a 4-0 win against Derby County, the game in which Grealish made his come back. Reinvigorated by his lengthy spell on the sidelines, the midfielder was imperious. When substituted in the 70th minute, he was given a standing ovation from those inside Villa Park.

Few players in the second tier can claim to be as influential as Villa’s captain. At just 23 years old, he has dragged his side from midtable insignificance to a place in the top six. He has responded to that incident against Birmingham – which might have set many young players back – by performing at an even higher level.

Grealish, touted for many years as one of English football’s brightest prospects, has come of age and Villa are reaping the rewards.

Since his return to Dean Smith’s side, he has scored four goals – including crucial winners at Birmingham and Rotherham – and provided two assists. Alongside the equally in-form John McGinn in Villa’s midfield, Grealish has been granted the freedom to roam, create and score. And he has relished it.

It is no surprise, then, the Villans are in such prolific form. Over the last ten games – nine of which Grealish has started – they have found the net 23 times. They have tightened up defensively, too, conceding just five goals.

Grealish’s influence has been tangible. His presence alone has clearly lifted his teammates, so much so that Villa now look a good bet to storm through the playoffs. He has provided drive and quality in midfield, contributing in attack and defence.

Under Smith, he has been given more license to push forward, but he remains a player capable of operating in a variety of midfield roles. 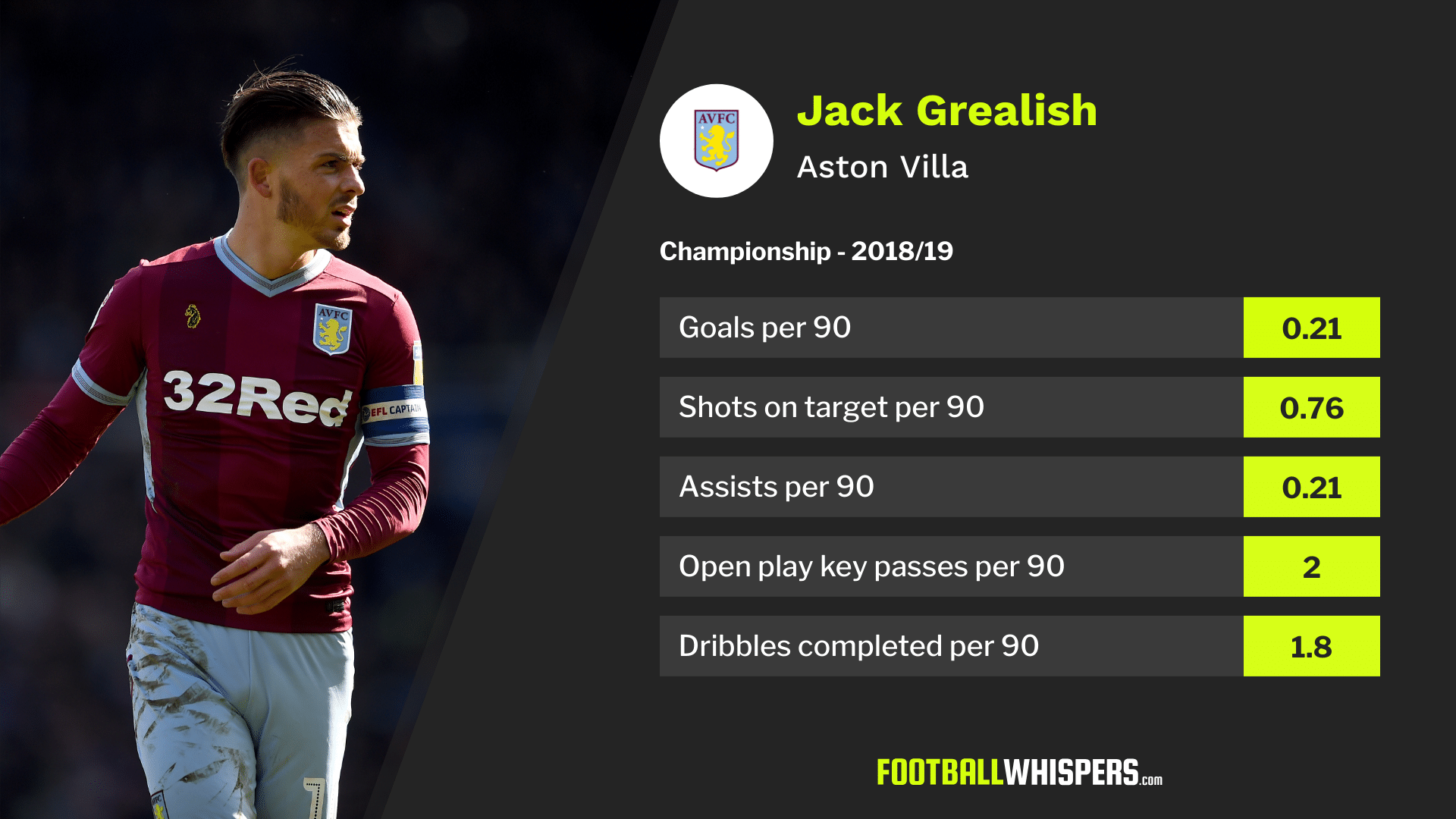 Only two players in the Championship can better Grealish’s average of two key passes from open play per 90 minutes. He ranks within the top ten for attempts on goal per 90 – 2.21 and successful take-ons – 1.79.

Like Eden Hazard in the Premier League, Grealish is often targeted by opposition defenders. Clearly, he has been identified as the man to stop when playing Villa, although that approach has not proved overly successful of late.

Grealish has been fouled an average of 4.65 times per 90 minutes in the Championship this season, some way ahead of the next player in that list – Sheffield Wednesday’s Fernando Forestieri, who is impeded on average 3.67 times per game.

Grealish’s guile and creativity does not detract from the grittier side of his game, though. He has won an impressive 8.63 of his defensive duels per 90 this season and attempted 1.27 tackles per game.

It is little wonder, given Grealish’s performance levels this season, that he continues to be linked with a move to the Premier League. Tottenham Hotpsur, who were close to signing the midfielder last summer, could be a potential destination. There is also interest from Crystal Palace, Bournemouth and West Ham United.

For Villa, the hope will be that Grealish chooses to stay. That does not seem out of the realms of possibility. Despite interest from elsewhere, he is a boyhood Villa fan, captaining the club he once watched from the stands.

“He's got a long-term contract at the club. When I came in, I said how I wanted him to lead us into the Premier League,” Smith said of Grealish in a recent interview with Villa’s official website. “I think he can do that. He's the future of this football club. He's got a long contract here.

“He's a really good professional as well, and I felt if I didn't give it to him it could be overlooking the leadership qualities I know he has. He leads by example anyway in the way he plays. I felt making him captain could enhance those qualities. I had no doubts about giving it to Jack. I knew it wouldn't be a burden to him and that he'd relish it – it's his club, he's a Villa fan.”

Grealish now has a choice to make. The option of a move to the Premier League is likely to be available in the summer should Villa miss out on promotion, and the last couple of months suggest he is ready to make the step up.

For now, though, the focus will be on guiding the club he loves back to the top flight.