Football League to prove it.

The Evening Standard reports that while a price is yet to be agreed, discussions are progressing well and the 18-year-old is expected to join the North Londoners with a view to competing for a first-team place.

Who is Jack Clarke?

The York native has been subject of Premier League interest before. In 2017 then Leeds coach Thomas Christiansen elected not to include the teenager in his squad for an EFL Cup tie against Leicester City as the Whites did not have the protection of a professional contract in place.

The Dane was right to be concerned. Manchester City had been sniffing around before Clarke inked his first pro deal in November that year.

Paul Heckingbottom took a shine to Clarke during his short-lived reign as Leeds head coach before Marcelo Bielsa took up the reins last summer, handing Clarke his professional debut in a 1-1 draw against Brentford in October. He did not look back and finished the season with 24 appearances for Leeds – 20 of which were from the bench – as well as two goals.

Making the leap to the Premier League will be a challenge for someone with fewer than 1,000 minutes of senior football to his name. But Spurs evidently have high hopes for Clarke with the Evening Standard claiming the teenager will not be loaned back to the Championship side this season.

Is Clarke ready for the Premier League?

That is the million-dollar question.

Clarke did not make his first Championship start until January, shining in a 2-0 win over play-off rivals Derby County which gave everyone an indication of what the precocious attacker could do.

However, Clarke's progress under the watchful eye of maverick coach Bielsa was checked in February when he was taken ill on the bench against Middlesbrough. Paramedics attended the scene with the winger given oxygen before being taken the hospital for further testing. 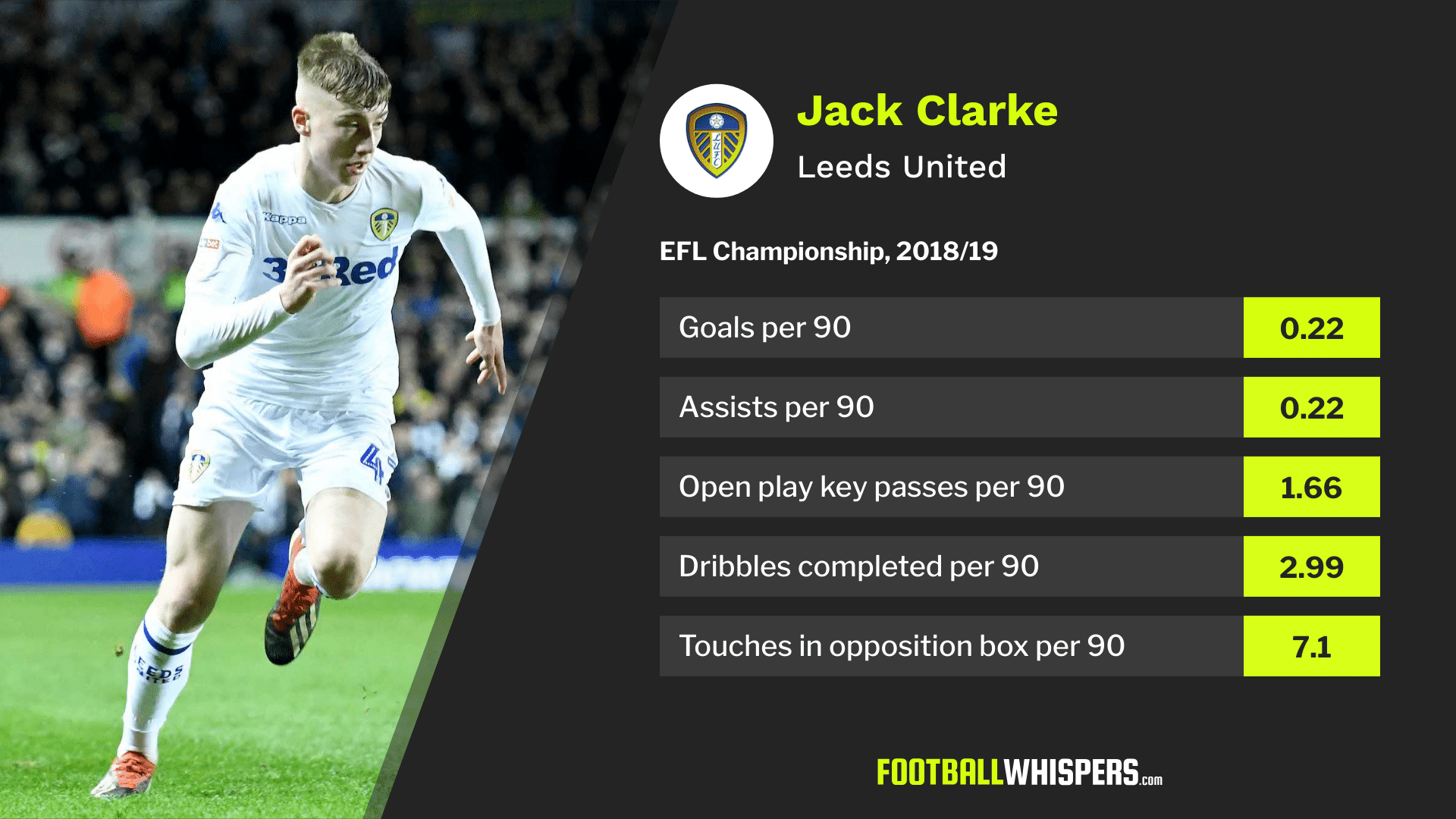 In the end, it proved to be nothing more than a scare, but Clarke made just three further starts for Leeds before their season ended with play-off heartbreak against Frank Lampard's Derby side.

Despite being held back by Bielsa, Clarke showed the hype surrounding him has been more than justified. Emboldened by the fearlessness of youth, Clarke's direct and nerveless displays, running at full-backs and beating them for fun, were a feature of his play.

That willingness to attack defenders brings with it inevitable questions over his decision making with stamina also another area for improvement. Clarke only completed 90 minutes once and the famed increase in intensity and speed of the Premier League will be a significant hurdle for the 18-year-old.

It's difficult to read too much into Clarke's numbers for 2018/19 given his relative lack of minutes – a threshold of 20 per cent of available minutes is usually applied – but what there is makes impressive reading. 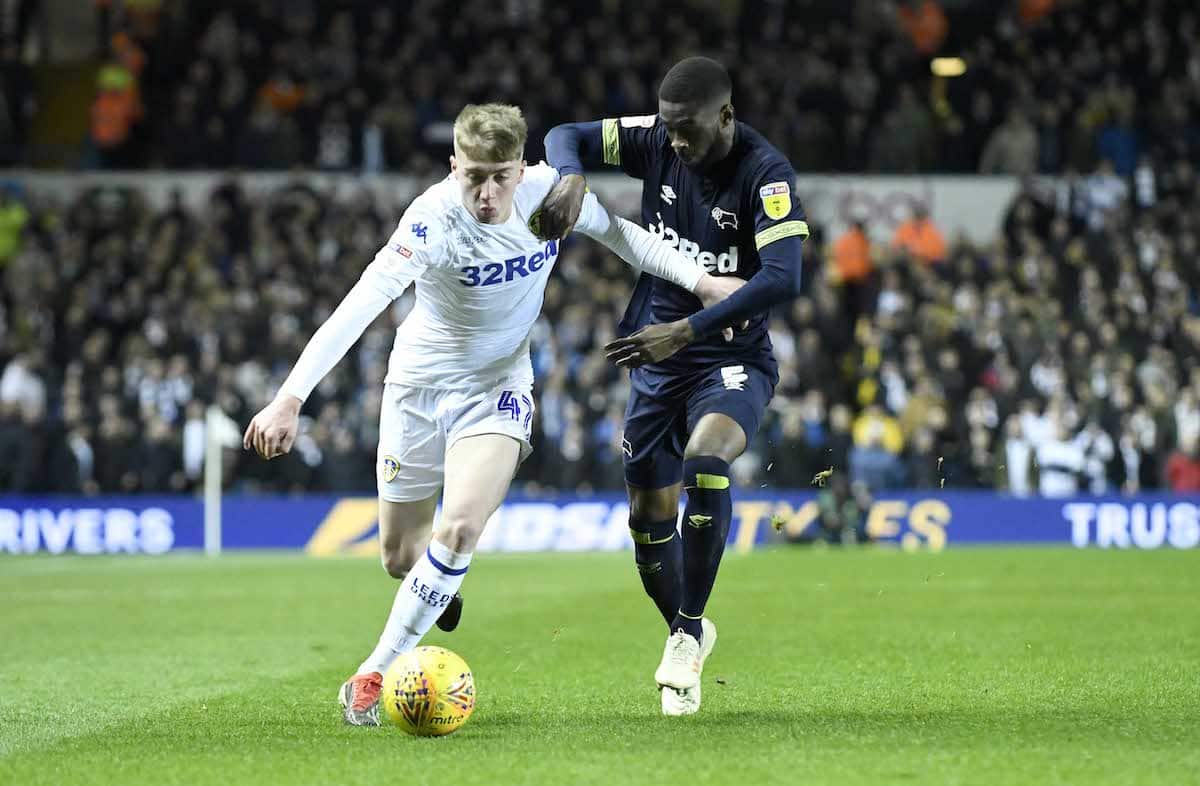 Clarke also got into the penalty area with incredible regularity for a winger, taking 7.1 touches in the opposition's 18-yard box per 90 – the sort of number usually the domain of a forward.

Indeed, the only Championship players who beat that return were Queens Park Rangers‘ Matt Smith (7.66) and Leeds team-mate Patrick Bamford (7.63), both of whom are out-and-out centre forwards.

Where would Clarke fit in at Spurs?

With Lucas Moura regularly filling in up front last season, the wide-right berth was shared between the Brazilian, Erik Lamela, Heung-min Son and Moussa Sissoko.

And while Clarke is unlikely to move to Tottenham and immediately make that spot his own, Mauricio Pochettino showed in his handling of Dele Alli that he is not afraid to lean heavily on players who lack top-flight experience.

In all likelihood, though, Clarke will share the right-wing role with the aforementioned players and be eased into proceedings at Tottenham Hotspur Stadium.

If he joins their list of Football League success stories, the wait for a new signing will have been worthwhile.