A scattergun approach in the transfer market isn't always ideal, however, it can turn out to be a success.

Everton have left it late this summer to upgrade areas of their squad. If reports are to be believed, they’ve bid for four players over the past 48 hours with Wilfried Zaha, Kurt Zouma, Chris Smalling and Alex Iwobi on Marco Silva’s wishlist.

Such a flurry of activity gives the impression the club are desperate but it’s clear the Toffees have two positions they’re looking to improve; a centre-back and a tricky wide player.

Everton may have had bids for the quartet knocked back but The Athletic journalist David Ornstein claims they could return with an increased offer for Iwobi.

It’s fortunate, really. Of the four transfer targets in the public domain, it's the Arsenal man the Merseysiders should be pursuing. A £30million offer has been rejected and a bid in excess of £40million would have to be made to tempt the Gunners into selling the 23-year-old.

Initially, it seems like a lot of money for Iwobi.

The Nigeria international isn’t a prolific wide player, averaging just three league goals per season, and he’s not exactly a creative hub, with just six assists to his name in the Premier League last term. Neither of those stats screams £40million player.

But in a post-Neymar to Paris Saint-Germain world, £40million is the new £25million. Iwobi may not be a game-changing signing but with 100 Premier League appearances to his name, he has the ability, the potential and the experience to prove value for money.

The link to Zaha was a confusing one, as detailed here, with the Crystal man relying on individual brilliance to impress. Adapting to a different system is by no means straightforward and it strips away what makes the former Manchester United man so fearsome.

Silva's attack needs a player comfortable with filling the selfless role as a provider. With Richarlison, Moise Kean and Dominic Calvert-Lewin all eager to get on the scoresheet, the Toffees need a supply line. Iwobi fits that profile down to a tee. 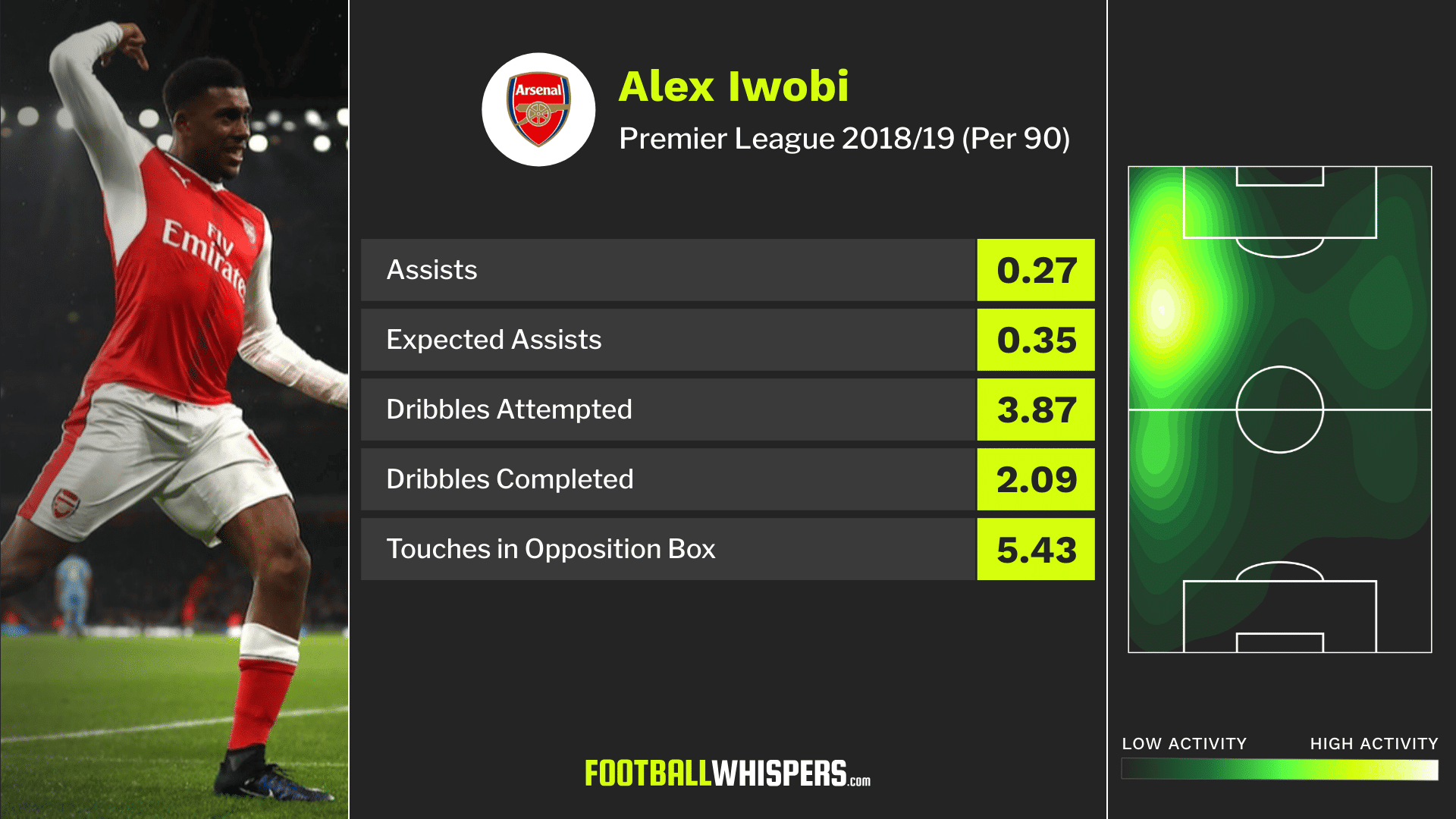 Last season, the Arsenal No.17 chipped in with 0.27 assists per 90 and averaged an impressive 0.35 expected assists per 90. Deployed primarily on the left, Iwobi was used as a traditional winger in the sense he'd look to beat a man and get into the area before picking out a team-mate.

It may sound simple and fairly obvious but so many wide players these days are goalscorers. They have a selfish streak to their game and while it's welcomed by most clubs, every team needs an Iwobi in some form.

He creates space for others to exploit, averaging 5.43 touches in the area, he can beat a man, completing 54 per cent of the 3.87 dribbles he attempts on a per 90 basis and, perhaps the most undervalued part of his game, he can pick a pass. 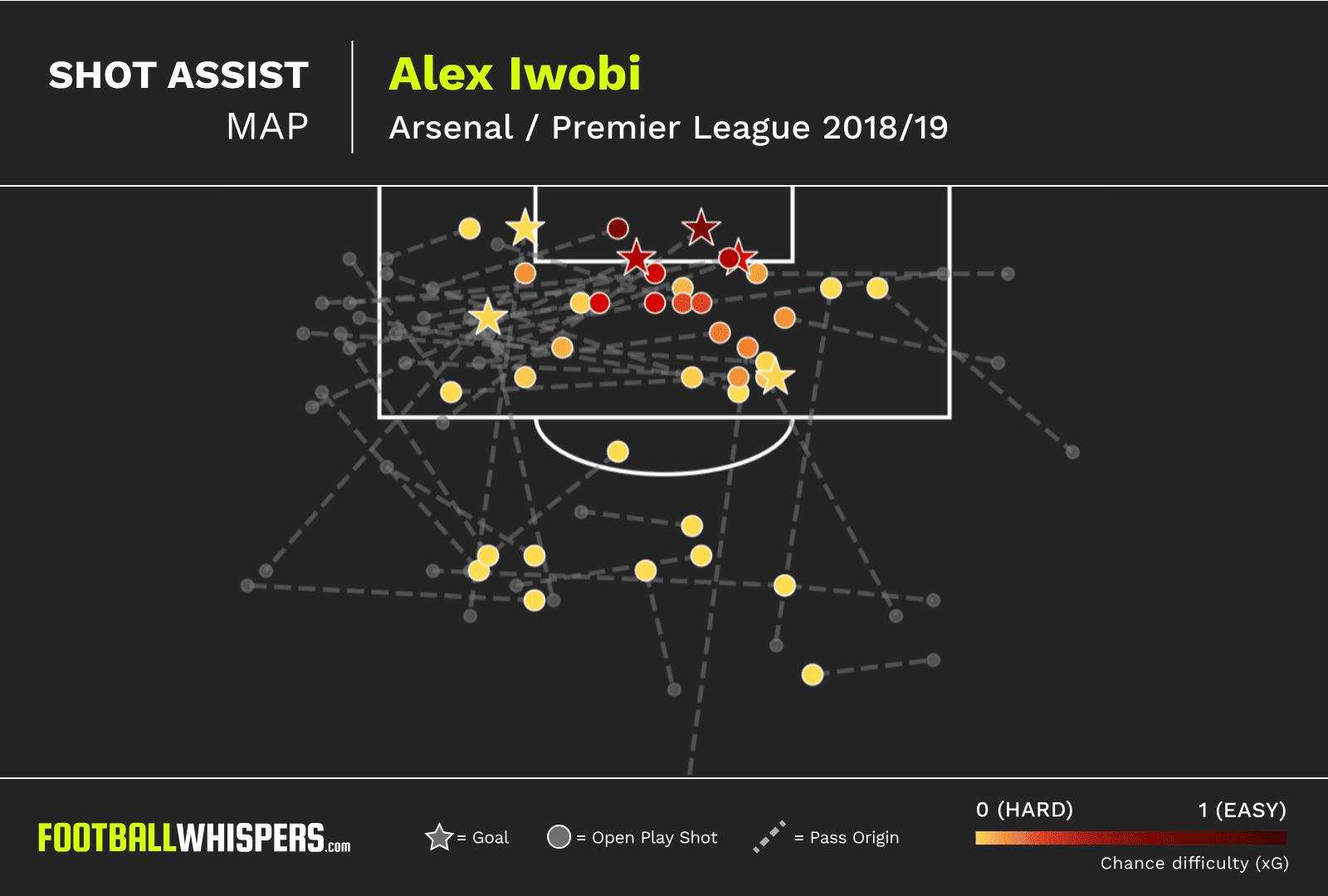 The graphic above shows Iwobi's open-play shot assists in the Premier League last season. Most originated on the left flank, something he can repeat if used there by Everton. The interesting point to take from this is just how dangerous the opportunities are that he created.

Many of these passes resulted in high-quality, dangerous chances for team-mates. The redder the icon, the easier the opportunity is. Of course, the player he's finding has the job of getting into those areas but without the final pass, there's no effort on goal.

Kean relies on this type of service and, as shown last season, Richarlison can be a penalty box poacher if required. Despite primarily being a wide forward, the Brazilian comes alive when the ball is put into the penalty area and some of his darts into space are ones top-class strikers would be proud of.

The 22-year-old has that desire to get onto the end of things and playing him alongside someone like Iwobi will only increase his goal return. The Arsenal man could be the key for Richarlison and Kean next season.

Unlocking the talent those two have could be what fires Everton into Europe.