Jose Mourinho is spoilt as a manager. 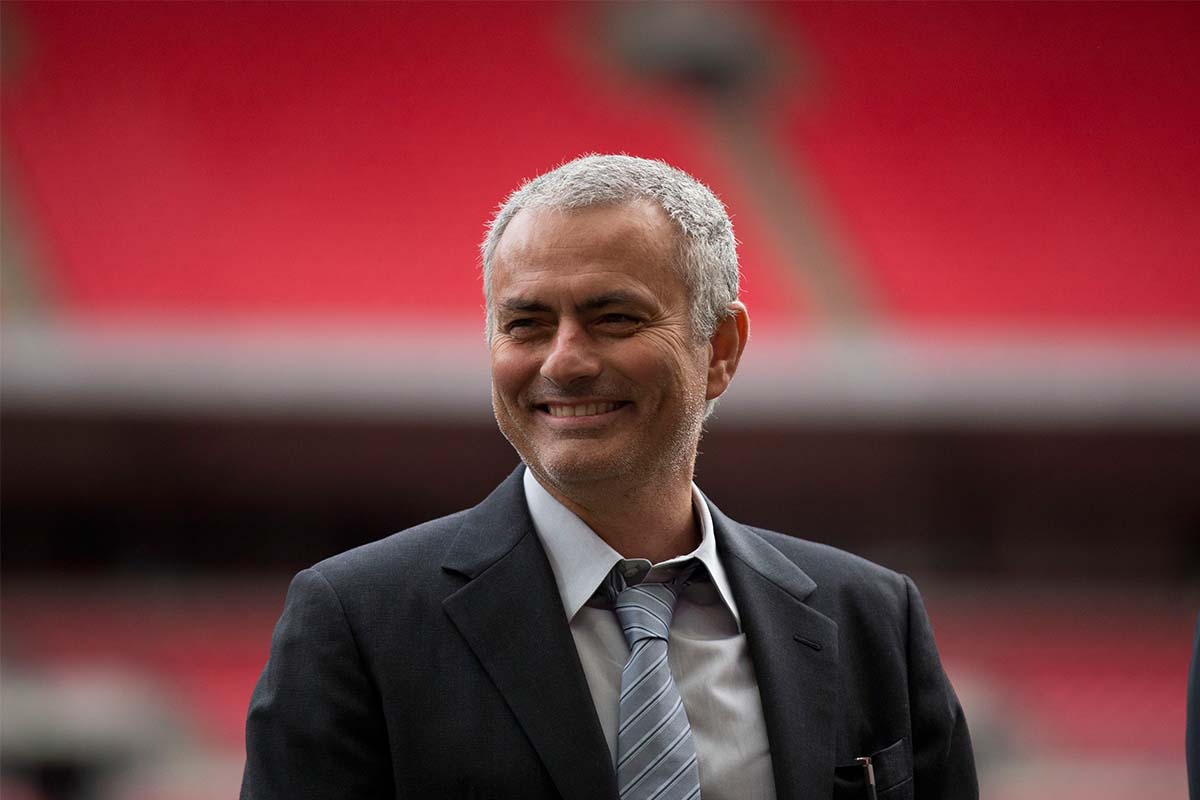 Not many other managers in the world can call upon the likes of the legendary Zlatan Ibrahimovic, record breaker Wayne Rooney, the fleet footed Juan Mata, the mercurial magician known as Henrikh Mkhitaryan and the explosive talents of Marcus Rashford and Anthony Martial. An honourable mention goes to Jesse Lingard too.

But, according to Calciomercato, the Manchester United manager isn’t content with these attacking options and wants to strengthen this area in January.

The Italian news outlet claims Inter Milan attacker Ivan Perisic is a target for the Old Trafford club and they’re the favourites to land him due to the United boss' influence at his former side.

That, coupled with the fact new Inter manager Stefano Pioli is reportedly looking to bring in his own recruits gives merit to the potential deal. It currently stands at 3.0 on the Football Whispers Index.

The Portuguese manager is picky when it comes to attacking players. They’re expected to deliver in an attacking sense as well as contribute defensively. It can’t be one or the other and a balance is required for his system to work at its devastating best. The attacking players have to be disciplined, organised and tactically flexible. Perisic ticks all those boxes.

The Croatian has had a nomadic career. He started his career in France with Sochaux in 2007, spent a year on loan at Belgian club K.S.V. Roeselare and his form there convinced Club Brugge to sign him for €250,000 in August 2009. After a successful two seasons in Belgium, Jurgen Klopp and Borussia Dortmund came calling and signed the then 21-year-old for a reported €5million. 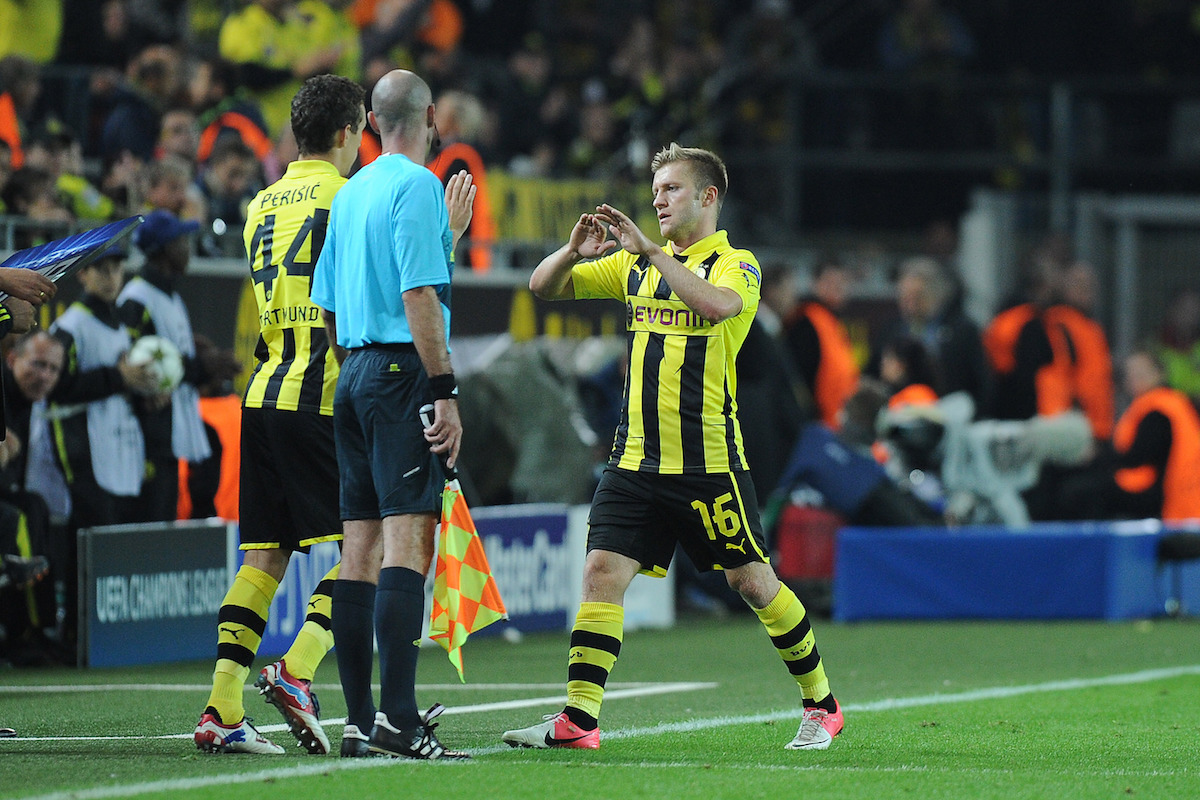 He didn’t enjoy his time under Klopp and is one of the few players to speak in a negative way about the Liverpool manager. Perisic was interviewed in his homeland and he made his feelings clear:

“I cannot be pleased with my situation at the club. I don't get a lot of time on the pitch, very much like last year,” he said.

“The stats show it: When I play I score. But when I don't score in a game, I am not an option for the next two or three games.”

When asked about his relationship with Klopp he added: ‘We have no relationship. He is the best coach in Germany right now, the number one, everyone accepts the subordinate role.’

In January 2013 he was sold to Wolfsburg for a fee of €8million. Perisic, who turns 28 years old in February, has been at Inter Milan since his €16million move from Wolfsburg in August 2015. He has 13 goals and seven assists in Serie A, spread over a season and a half at the time of writing. His most productive season came during the 2013/14 Bundesliga campaign, when the attacker netted on 10 occasions and set up a further four goals.

Premier League clubs Liverpool, Everton and Tottenham are all said to be monitoring the Croatia international, with Ligue 1 giants Paris Saint-Germain keeping a close eye on his situation at the San Siro, even after signing Julian Draxler from Perisic's former club Wolfsburg.

If reports from Italy are true and United do have an advantage you would imagine they’ll be able to secure a deal with relative ease.

Even if Inter Milan want close to £25million for the player, it’s pocket change to United.

He’s a chameleon of a football player. He’s suited to a possession-based side, a counter-attacking side and a pressing side. It’s just as well really as United play variations of all of those systems.

The press, which they’ve used against the likes of Liverpool and Manchester City, has worked really well and will improve with a player like Perisic as part of it. He’s confident on the ball and during his spell in Italy attempts, on average, 33 passes per 90 minutes. The average for the United wide players is 25 passes. He’s also deceptively quick so as United look to counter and Ibrahimovic needs support, he would be ideal. When it comes to defensive work – tackles and interceptions – only Mkhitaryan rivals him. The pair both average 2.4 per 90 minutes.

He’s not flashy and he’s not a signing to boost the profile of the club. But United don’t need that. He’s the sort of player you miss when he’s not playing and only then do you realise what he offers the team. He’s definitely one the casual observer would take for granted. 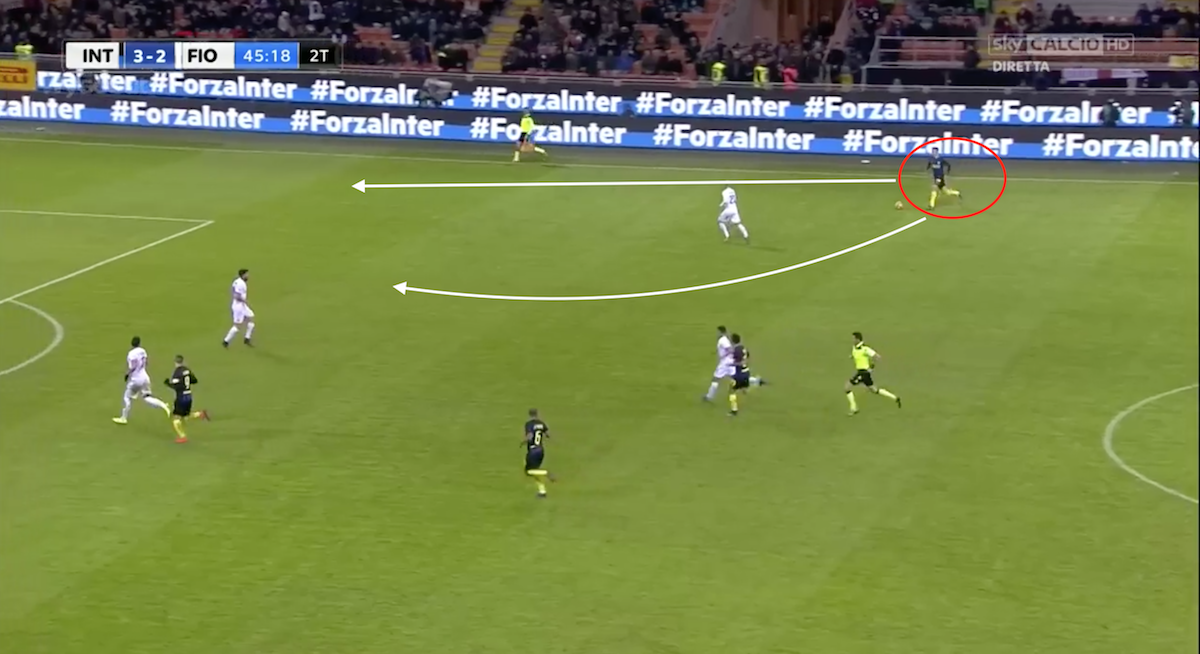 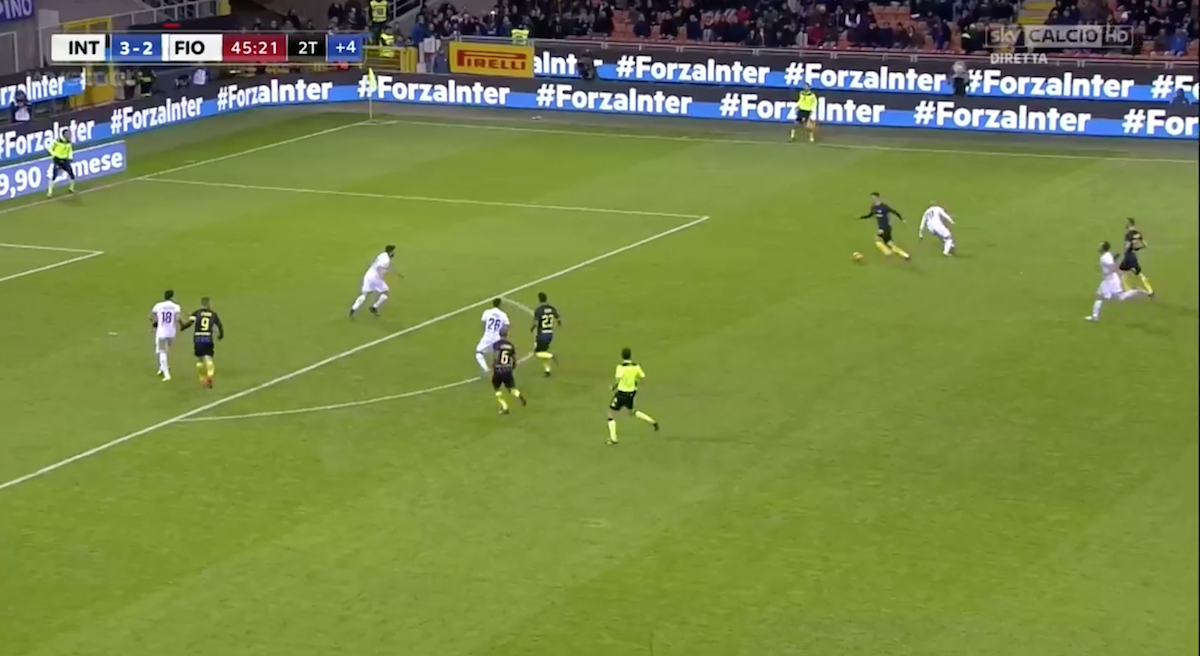 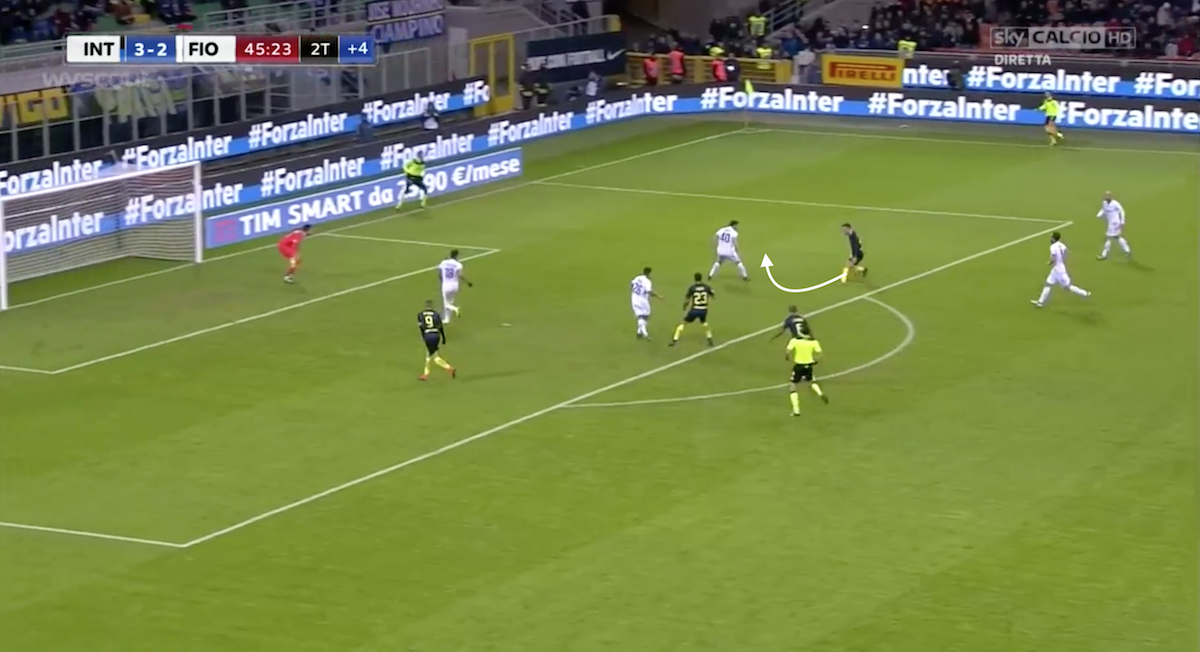 The three pictures above, taken during Inter Milan’s victory over Fiorentina, highlight how difficult it is to defend against Perisic. He’s confident on both feet and when he’s managed to isolate himself one-on-one with a player it’s anybody's guess as to which way he’s going to go.

In this instance he cuts inside, avoids the outstretched leg of Valero and he’s at the heart of the defence. He fakes to go on his left before working the ball back onto his right foot and testing the keeper.

It’s this which allows him to operate anywhere across the attack. Imagine Manchester United being able to field Perisic and Mkhitaryan either side of Ibrahimovic with the pair interchanging at various times. The fluidity would be seamless. 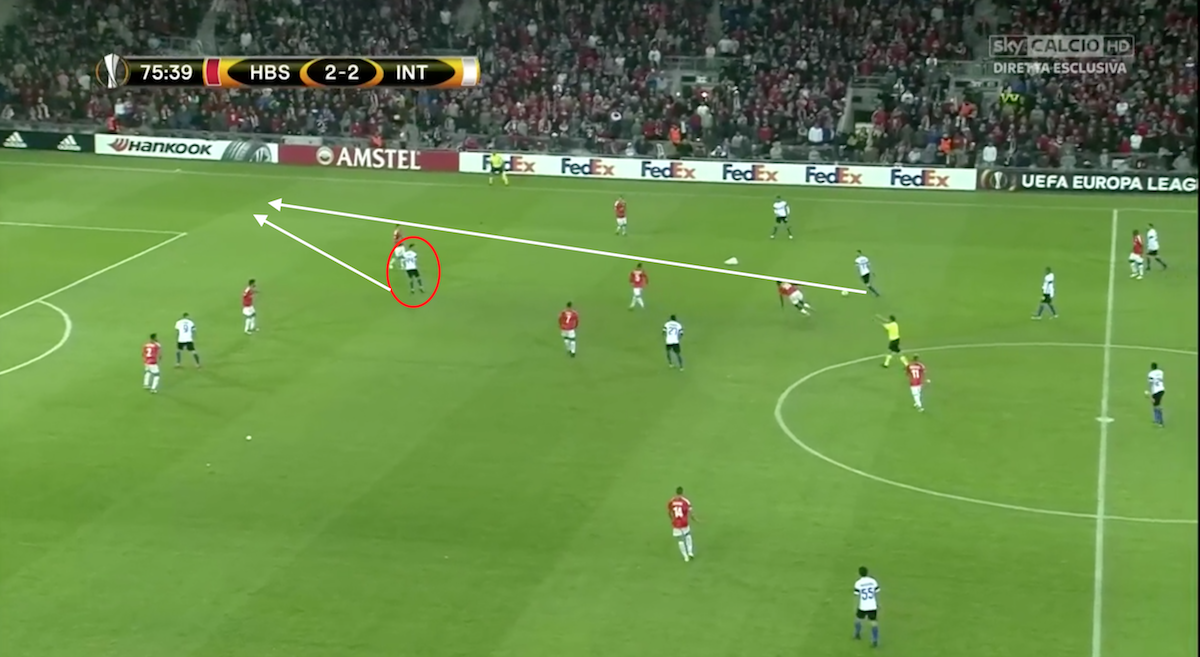 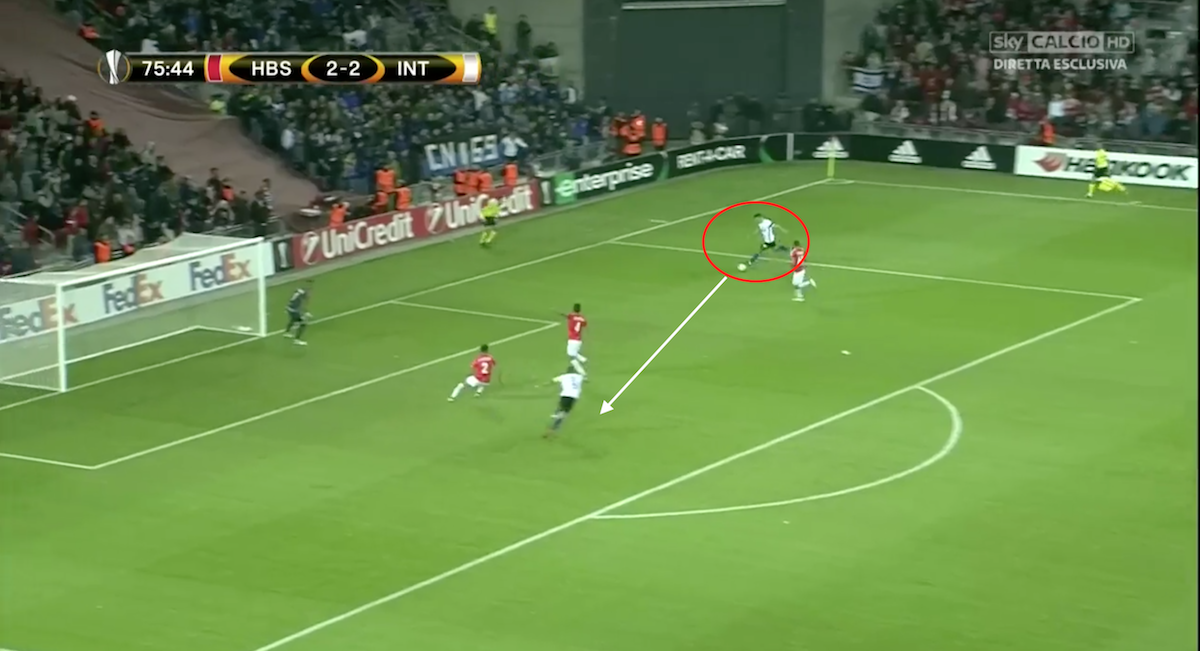 The two pictures above highlight his intelligence both on and off of the ball. In the first picture, instead of coming deep for the ball, he looks to get in behind and exploit the space. He angles his run to make the pass from deep easier and at the same time leave the defender in no man’s land.

After picking up the pass and driving into the penalty area he doesn’t just smash the ball across the face of the goal and hope for a deflection. Instead it’s a calm and measured pull back to Mauro Icardi but this time around the striker fires over. 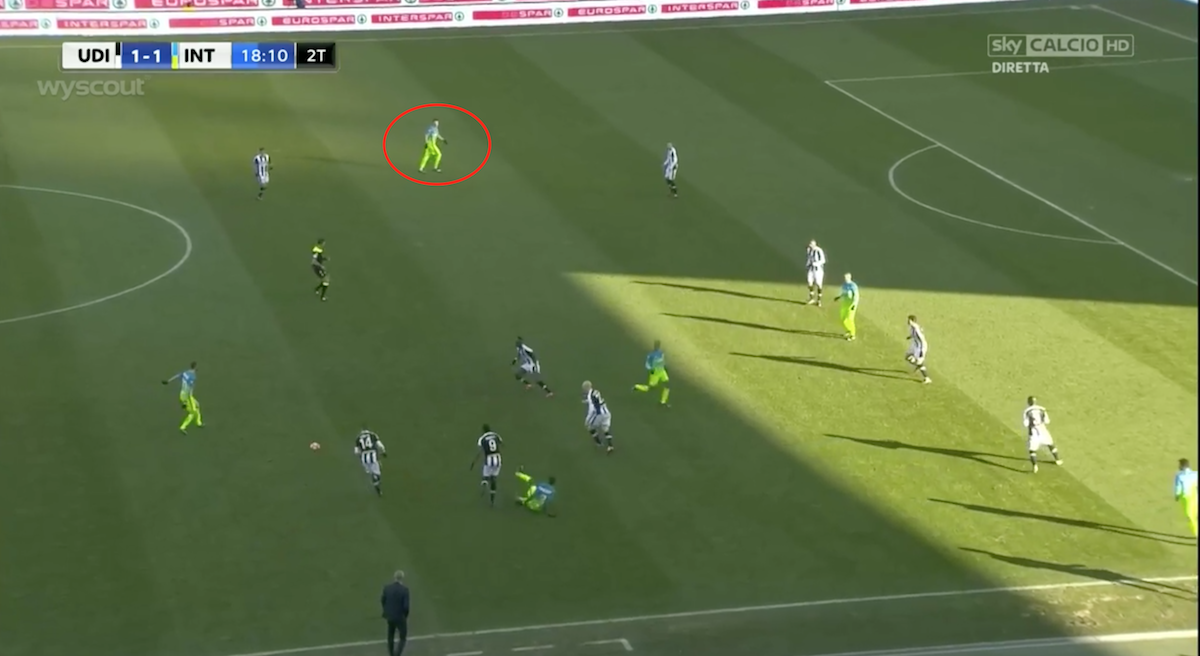 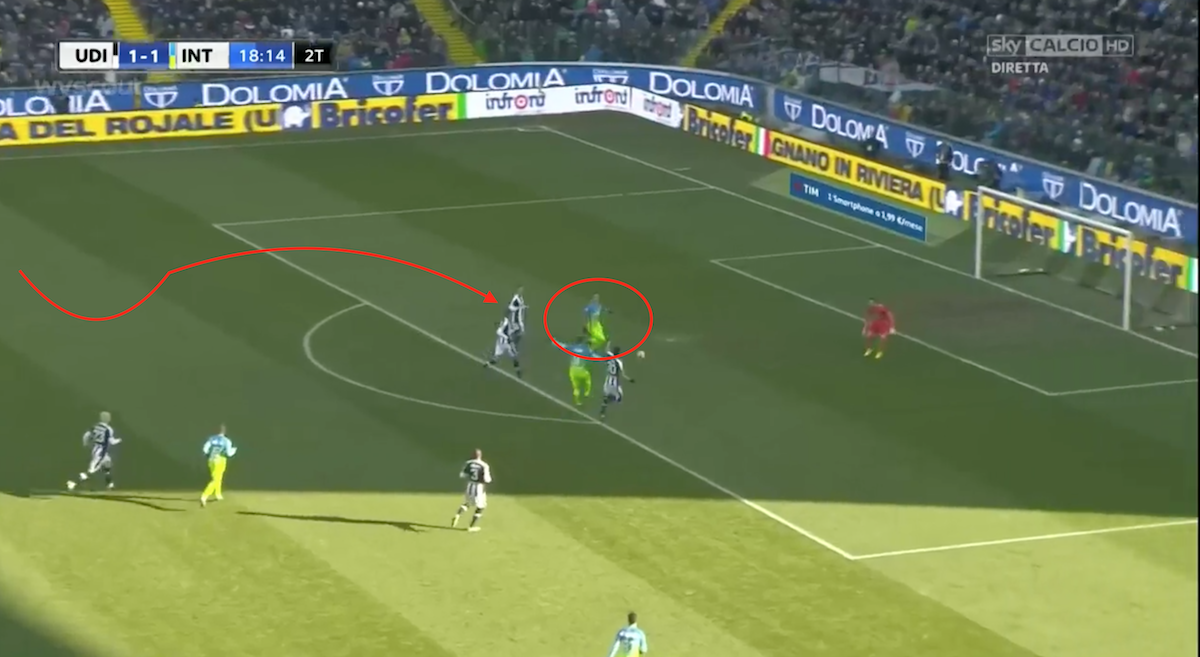 His movement is exceptional. He’s circled on the left in the initial picture but in the second one you can see he’s in the area just about to receive a pass. How he gets into this situation though is masterful.

As Dodgeball character Patches O'Houlihan once said “If you're going to become a true footballer, then you've got to learn the five d's of football: dodge, duck, dip, dive and dodge”. Or something like that.

Perisic starts off going wide before drifting in back out, and then runs straight across the face of the defender who was supposedly marking him. The burst of acceleration allows him to breeze past him and into a dangerous area.

The scary thought about Perisic to  United is the fact he improves them for a fee which can be considered next to nothing in the modern game. He’s got the ingenuity to create something out of nothing, he’s disciplined and he’s a goal threat. A holy trinity for Mourinho.