Italy can tighten their grip on top spot in Group C with a win against Lithuania on Wednesday evening. Read our free predictions and find the top odds for the game below in our match preview.

Italy to Win to Nil

Italy have been typically robust defensively in Group C so far, keeping four clean sheets in five assignments in the section while conceding just a single goal along the way. With Giorgio Chiellini and Leonardo Bonucci still anchoring the centre of their rearguard, the Italians are impenetrable to most and they should have little trouble keeping a subpar Lithuanian outfit at arm’s length in Reggio nell'Emilia.

Lithuania have yet to pick up a point in Group C, though they have at least shown an ability to frustrate their opponents for long periods in successive fixtures. Of the eight goals they have conceded in the section so far, six were shipped in the second half of their matches, including both efforts in their 2-0 reverse to Italy back in March. The Italians might have to show a degree of patience again on Wednesday as they attempt to break down their opponent’s massed ranks and we’re tipping the second period to see more action as a result.

As formidable a team as Roberto Mancini’s side are, Italy could never be described as prolific. The Azzurri have notched two or fewer goals in 14 of their last 19 fixtures and they have hit the net just seven times in five Group C matches to date. With that modest goal-scoring record a factor, we’re tipping the hosts to register under 3.5 times again in the team goals market.

Italy are in the driving seat in Group C, though they missed a huge opportunity to really put their foot down on Sunday. The Azzurri played a Switzerland team missing several key players in Basel, though the Italians couldn’t press home their advantage and they were held to a 0-0 draw after Jorginho had fluffed a second half penalty.

Robert Mancini’s men should rebound straight away against Lithuania however. The Rinktine have lost four contests out of four in their qualification campaign so far and they lack the class to trouble their hosts on Wednesday. 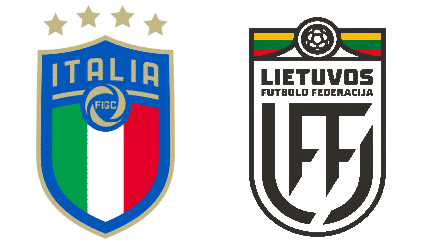 Wednesday’s game will be played at the MAPEI Stadium – Città del Tricolore.

Who is Italy’s top scorer in the group so far?

Ciro Immobile is the Italians top marksman so far with two goals.