On Saturday, Sánchez Flores replaced the equally popular Javi Gracia at Vicarage Road. Eight defeats in 11 and a run of five wins from 16 games did for the Spaniard who had credit in the bank after guiding the Hornets to the FA Cup final and their best Premier League finish (11th).

Fast-forward four months and the Horners are bottom of the league with a single point and just two goals after four games. Sánchez Flores' single-season at the helm, the new-old coach's job is to pull Watford out of the bottom three and away from trouble.

1. Settle his differences with José Holebas

Most at Watford were sorry to see Sánchez Flores leave the first time. Short-tempered left-back Holebas was not. The Greek, who arrived from Roma in the summer of 2015 claiming the deal had been done without his knowledge, played in two of Watford's first three Premier League fixtures before being sidelined until December 29.

That was – at least in part – due to Chelsea loanee Nathan Aké‘s emergence as the Hornets' first-choice left-back. But Sánchez Flores did not see eye-to-eye with the experienced Holebas. “I chose Holebas in the first match but his performance is not enough to keep him in the first XI,” Sánchez Flores said at the time.

“In the first year I didn’t know what the hell was going on, I was sitting more in my house than in a game,” Holebas told The Times last year. “That manager did not like personality and character. He wanted robots who say ‘yes’ and that’s it. You couldn’t say your opinion.”

In the meantime, Holebas has enjoyed an Indian summer to become one of Watford's more consistent performers. Last season he was third among Premier League full-backs for assists with six, fifth for completed crosses (1.72 per 90) and second for shot assists from set-pieces (0.82 per 90). It's been a difficult start to the season for the 35-year-old but Sánchez Flores needs him on board.

2. Tighten up the defence – quickly 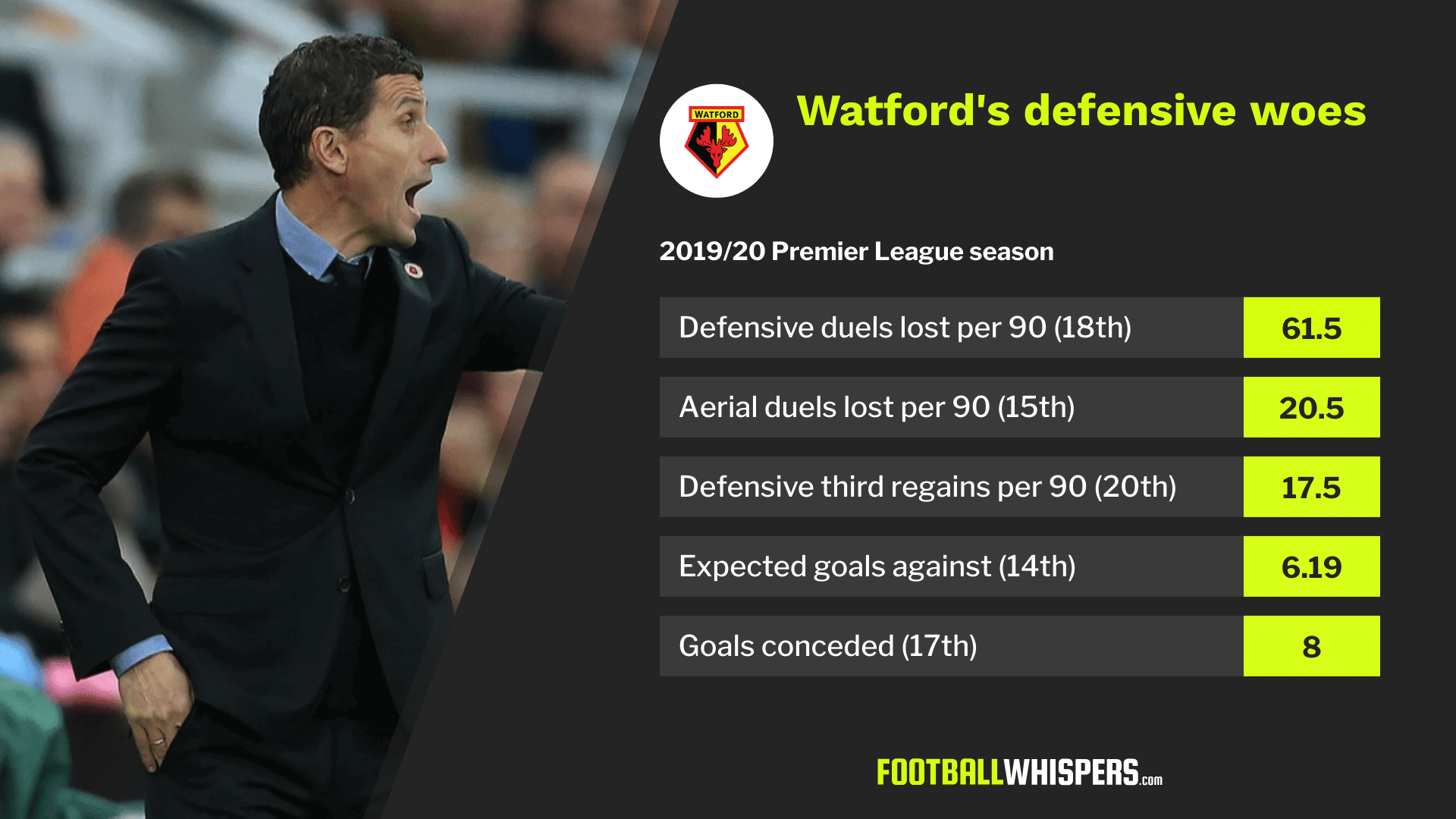 One of the great successes of Sánchez Flores' first spell was the measly nature of the back four. There were times when, admittedly, his defensive style of play was hard to watch – the 2-0 loss at Manchester City in just the third game of the season was an exercise and trying not to get beaten with the Hornets showing no ambition before succumbing.

How the Hornets could do with some of that defensive resoluteness now. Four games into the season they have been breached eight times despite having an expected goals against (xGA) total of 6.19. That isn't even the worst in the top flight – Tottenham Hotspur (6.28), Arsenal (6.52), Aston Villa (6.87), Norwich City (7.26), Bournemouth (8.62) and West Ham United (9.05) all have worse.

On one hand that's reassuring. Watford are in something of a false position if you delve into the underlying numbers. On the other, they've still found a way to concede more goals than they should have which suggests the opposition aren't having to work too hard.

In his first season at Vicarage Road, Sánches Flores oversaw a defence which conceded 50 times in 38 games. Since then Watford have shipped 68, 64 and 59. If he can drill the backline – which still contains Craig Cathcart, a stalwart of 2015/16 – then they'll be well on their way to safety.

3. Find a system which works

One of the criticisms levelled at Gracia most frequently was he was too loyal to his preferred 4-2-2-2 shape. In fact, it was not until his final match – a 1-1 draw at Newcastle United – that he finally deviated from it, surprisingly setting up in a 3-4-2-1 system to match the Magpies. 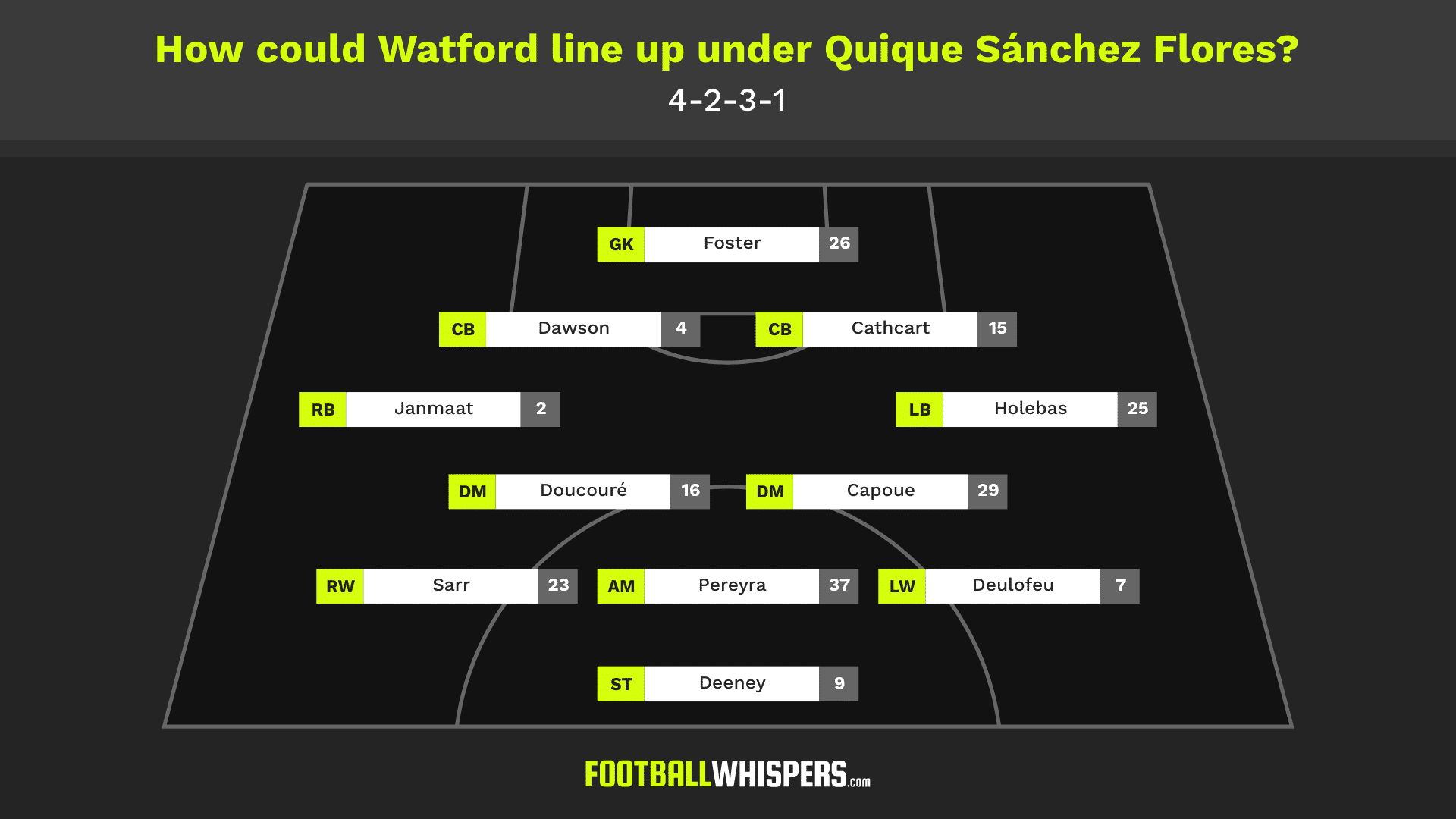 Watford supporters have been crying out for a change and although Sánchez Flores largely set his side out in a 4-4-2 during his single season at the helm, he had intended to play 4-2-3-1 with Troy Deeney leading the line. That was how the Hornets started on the opening day against Everton and it was only when it became apparent Odion Ighalo could not be ignored that he switched to 4-4-2.

That was an extremely limited squad. With club-record signing Ismaïla Sarr, as well as dangermen Gerard Deulofeu and Roberto Pereyra (more on him soon) to fit in, Sánchez Flores might reprise the 4-2-3-1.

4. Get Roberto Pereyra back to his best

By October 27 last season the Argentine maverick had five Premier League goals. He scored once again in the remaining seven months of the season, ending a campaign which had begun with such promise in desperately disappointing form.

It was Pereyra who squandered Watford's one real gilt-edged chance at 0-0 in the FA Cup final against Manchester City and that moment encapsulated the former Juventus schemer's Hornets career; close, but no cigar.

On his day the 28-year-old can be unplayable. You don't get signed by Juventus if you're no use  – on the international scene, Pereyra calls Lionel Messi, Paulo Dybala and Sergio Agüero team-mates. 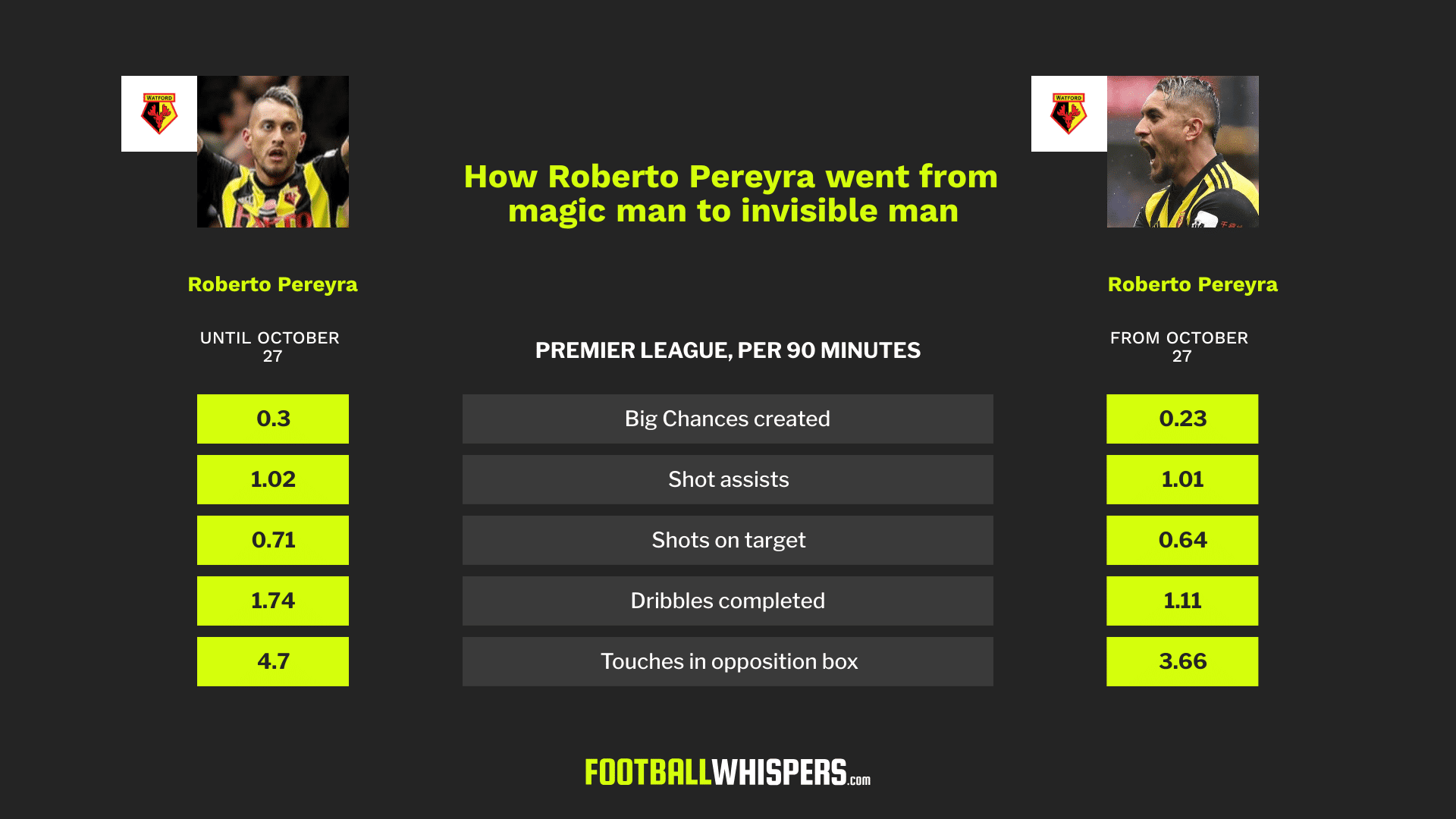 In the first ten games of last season, Pereyra created 0.3 big chances per 90, supplied 1.02 shot assists for his team-mates, completed 0.4 crosses, had 0.71 shots on target, succeeded with 1.74 dribbles and took 4.74 touches in the opposition's box. In his remaining 23 appearances every one of those metrics saw a drop.

The question is where Pereyra will fit in – especially if Sánchez Flores opts for a 4-2-3-1 system. He has regularly flattered to deceive in the No.10 role and prefers starting on the left and drifting inside. But if there's to be only a single striker, Deulofeu will surely make the left-sided spot his own.

Somehow Sánchez Flores must restore Pereyra to his brilliant best and find a role in the team for one of his most – on his day – dangerous players. 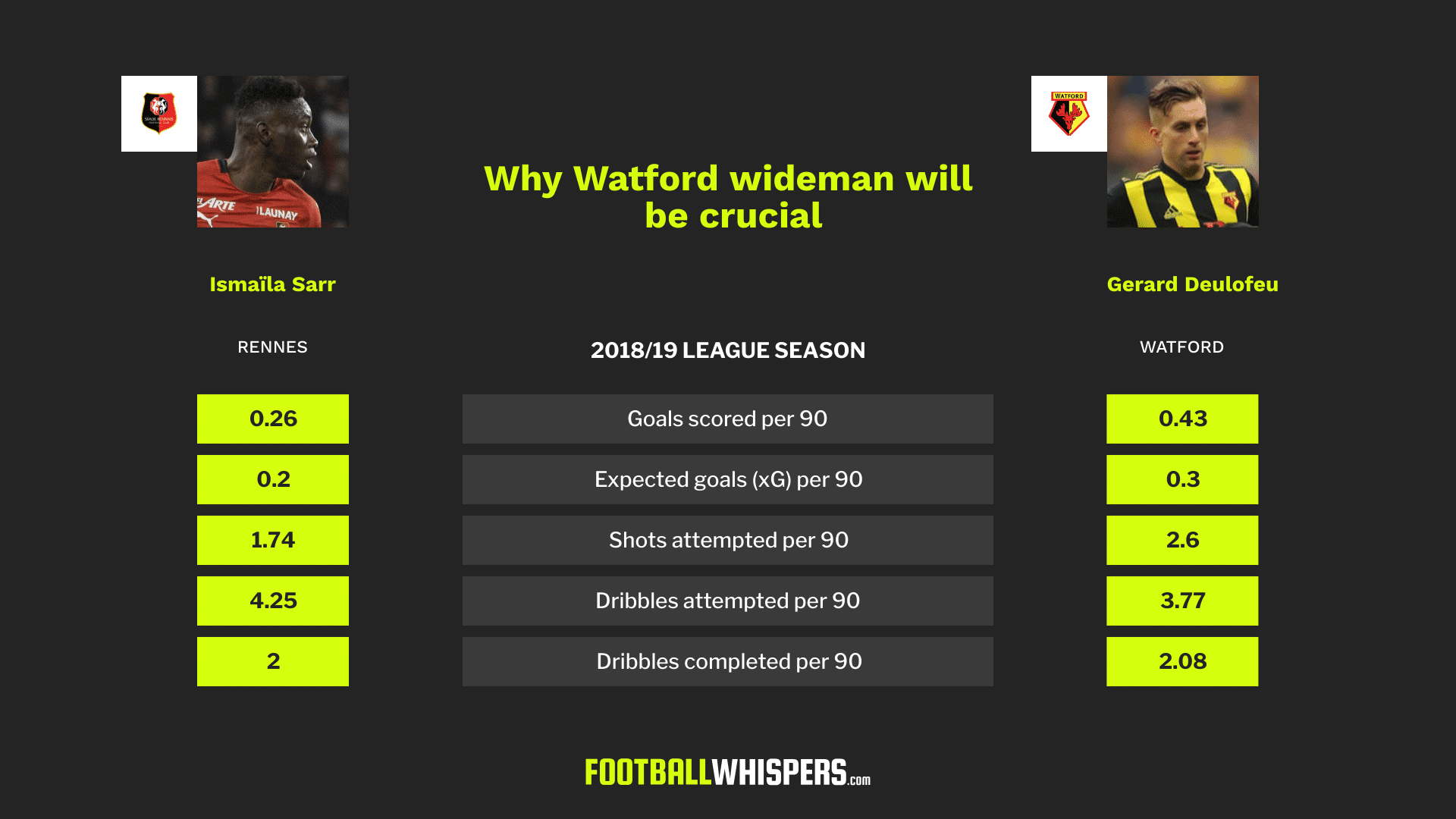 The pair are indicative of the sharp upturn in quality available to Sánchez Flores since his first spell in WD18. Then, Étienne Capoue was Watford's record signing at around £6million. Now Sarr could cost up to £40million in the long run.

When Sánchez Flores was first at the helm the squad desperately lacked game-changing quality. José Manuel Jurado provided it in flashes but was a Vicarage Road boo-boy. Steven Berghuis might have been the answer – though two assists against an already relegated Aston Villa does not make a season – but Sánchez Flores never trusted the now-Netherlands international.

The less said about loan signings Victor Ibarbo and Alessandro Diamanti the better. Neither will go down in Watford's Hall of Fame.

It was a workmanlike squad with Ben Watson the embodiment of the team Sánchez Flores tried to build. The Englishman enjoyed a fine season in the centre of the park, playing in all but three top-flight fixtures that season.

It was a common occurrence to see four nominally central players strung across midfield. At Old Trafford, for example, Sánchez Flores went with Almen Abdi, Valon Behrami, Watson and Capoue – the ploy worked until Juan Mata's 83rd-minute free-kick, but it's hard to something similar going down well now given the depth of talent available to Sánchez Flores.

There is plenty from the Spaniard's first spell at Vicarage Road to suggest he can make a success of this season still. Equally, there are plenty of lessons he has to have learned from. He'll do well to finish this season without a few more wrinkles and grey hairs.