For the second time in three seasons Chelsea have failed to qualify for the Champions League. And based on the Blues performance on the final day against Newcastle United, they don't deserve to be in European football's premier competition next term.

Antonio Conte's side knew they had to win and then hope for a shock at Anfield; only a Liverpool loss at home defeat to Brighton and Hove Albion would see them through.

Yet Chelsea capitulated at St James' Park. They were lacklustre at best, downed tools at worse. The Magpies run out comfortable 3-0 winners and the margin of defeat could've been worse were it not for wayward finishing from the home side.

Conte's position at Stamford Bridge has been under threat for several months, this meek surrender will have surely made up the club hierarchy's mind. There have been big, big problems behind Chelsea's failings this season, both on and off the pitch.

And we've taken a look at the issues that have seen the Blues finish outside of the top four once again.

In the past 18 months Chelsea have signed eight players for their first team. Damningly only one of those can be judged a success, and that is Olivier Giroud, who joined in January and has been involved in a Blues goal every 95 minutes.

The jury is very much out on the remaining eight. Álvaro Morata has 15 goals in all competitions but has been wildly inconsistent since September. Antonio Rüdiger and Davide Zappacosta have had as many bad games as good, Daniel Drinkwater and Ross Barkley have been plagued by numerous injury issues while Emerson Palmieri has only made five starts.

And then there is Tiémoué Bakayoko. The French midfielder arrived at Stamford Bridge last summer from Monaco for £35million. His signing was viewed as a coup and was crucial in the Blues allowing Nemanja Matić to leave for Manchester United for £40million.

But Bakayoko’s debut campaign in English football has been difficult. He missed much of pre-season with a knee injury and has never looked comfortable with the pace of the English top flight. Too often he’s been cumbersome with the ball and wasteful with it. Yet he is only 23 years old and can improve, so all is not lost.

However, Chelsea’s business this summer must be far better. Instead of going for quantity the Blues must go for quality. They need players who will walk into their first XI and make it stronger, especially with the future of Eden Hazard uncertain.

The aging fringe players in the squad should be moved on too. Pedro, Gary Cahill and David Luiz have been important players for the Blues, but they are now taking up a space that could be given to the likes of Kurt Zouma, Ruben Loftus-Cheek, Mason Mount and Tammy Abraham.

While Chelsea signed badly, they were also players their head coach didn't want at the club. And rather than keep his council on that issue Conte opted to air the club's dirty laundry in public.

“I have to speak more with the managers who are very, very good at persuading their clubs to spend money to buy top players,” he said in February. “I think I'm a bit of a disaster to convince the club to buy players. I think in this aspect I can improve a lot.

“I have to learn a lot from the other coaches, the other managers, in that aspect.”

They are hardly words that will inspire a team and after those comments were made Chelsea lost against Manchester City and Manchester United.

During his first campaign in English football Conte was charming and relaxed figure. His demeanour since the summer has been far darker, however. He has been constantly unhappy and hasn't cared who knows it.

That in turn has given his players an excuse. Conte has allowed himself to become the fall guy.

Last season the Chelsea team-sheet could’ve been carved on to stone. Unless there was an injury or a suspension Conte would name the same starting XI almost every week.

This term that was never going to be possible with the Blues back in the Champions League. Rotation was required if Chelsea were to compete on four fronts, which they have done, playing in 59 games across the season.

Yet while making changes to the attack and midfield is understandable, it’s Conte’s decision to constantly tinker with his back three which is raised eyebrows. Cahill and Rüdiger have been in and out of the side while Andreas Christensen has also had a spell out of the team.

That lack of consistency in the back line has seen Chelsea struggle to contain opponents, there is a lack of familiarity and tactical discipline. Last season they shipped 33 goals in the Premier League, this term the ball nestled in the Chelsea net on three more occasions.

However, it’s when you delve into the deeper numbers that the Blues’ frailties become apparent. Last season Conte’s side’s expected goals (xG) conceded was 25.29, this term it’s 35.62.

The difference in the Blues’ post-shot xG – a model which measures the probability of a shot on target finding the net – is also eye-opening. During the 2016/17 season Chelsea’s post-shot xG was 24.98, this term it’s 33.07. That suggests the Blues first-choice, Thibaut Courtois, has also had a poor campaign. 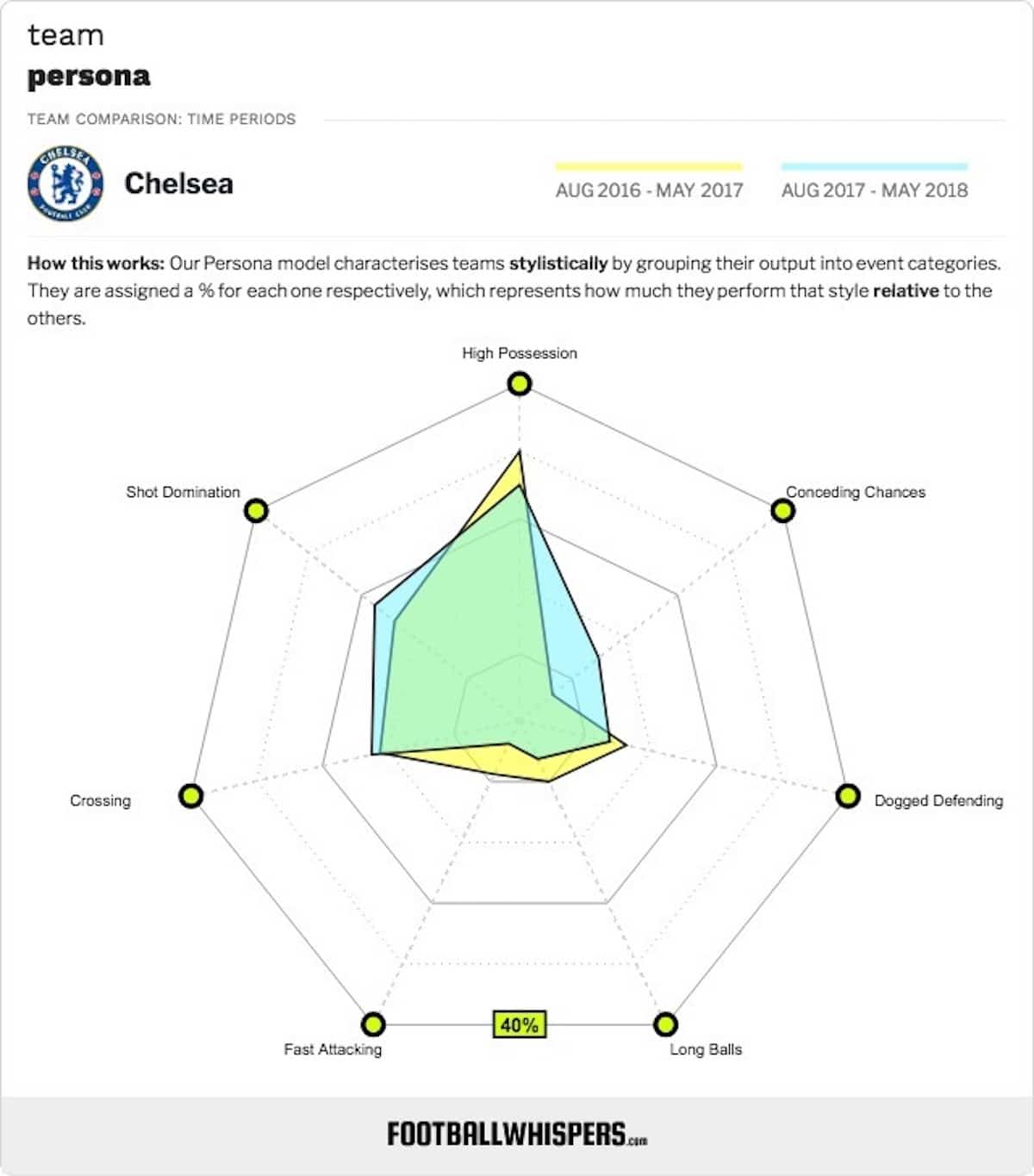 No reliable goalscorer was costly

This mistake is on Conte and not the club hierarchy. Chelsea had one of Europe’s best strikers on their books in Diego Costa and while he was difficult to handle and was always pining for a move back to Spain, he would’ve been at Stamford Bridge this season were it not for the Italian.

In one simple text Conte damaged his team’s 2017/18 season before it had even began.

“Hi Diego, I hope you are well. Thanks for the season we spent together. Good luck for the next year but you are not in my plan.”

Chelsea wanted another striker before the Spain international revealed the text –the Blues linked with Romelu Lukaku for several months. But when they missed out on the Belgian to Manchester United they had no fall back plan. 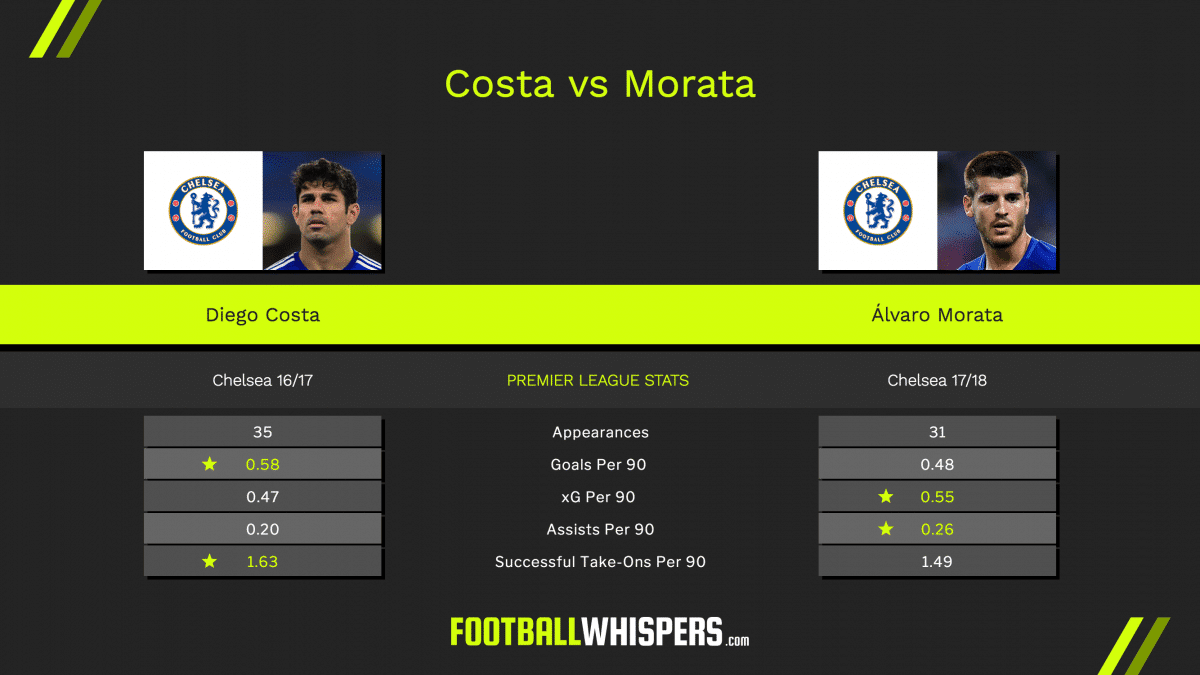 Without that text being sent Chelsea could’ve fallen back on Costa, a world class striker in his day. But the damage had already been done and that left the Blues with no option to spend big on a player they weren’t totally convinced about; Morata.

The former Real Madrid star started explosively with nine Premier League goals in his first 14 games in the English top flight. But he has netted just two since and has been replaced in the first-choice starting XI by Giroud.