Ismaïla Sarr is building a compelling case to be considered one of the hottest prospects in Europe.

The 20-year-old winger was instrumental in Rennes securing a fifth-place finish in Ligue 1 last season. He then carried his fine form into the 2018 World Cup in Russia, providing verve and impetus from the flanks in an exciting Senegal side.

And Sarr has maintained his momentum in the current campaign, with three goals to his name from six appearances, including a wonder-strike against Jablonec in the Europa League, his right-footed, top-corner rocket going viral on Twitter.

It's no wonder, then, that several of Europe's biggest and best clubs are now reportedly weighing up a big-money move for the young attacker, with Manchester United, Liverpool, Arsenal, Chelsea and Inter Milan all named as potential suitors.

Who is Ismaïla Sarr?

Sarr got his start in football in his homeland with Génération Foot, the Senegalese club with perhaps the most prolific academy in Africa.

Sarr got his break in Europe with Metz, signed by the Ligue 1 side in the summer of 2017 and helping them avoid relegation to the French second tier, scoring five times in what was to be his only season with the club.

His performances with Metz, displaying an encouraging bravery and adventure in light of Les Greats‘ struggles, convinced Rennes to part with €17million to secure his services.

Since joining Rennes, Sarr has been directly involved in nine goals (six goals, three assists) in 30 Ligue 1 outings, while his speed, skill and unpredictability in the attacking third has made him one of the most feared attackers in France – evidenced by the fact only Neymar and Nabil Fekir were fouled more frequently than the 20-year-old last season.

What are Sarr's strengths?

Arriving at Rennes in the summer of 2017, Sarr filled the void in Les Rouges et Noirs' frontline left by Ousmane Dembélé‘s departure for Borussia Dortmund a year earlier. And the French superstar, now shining with Barcelona, is the player Sarr is most often likened to stylistically.

While not quite as ambidextrous as Dembélé, Sarr is comfortable on either flank and possesses a similar ability to breeze past multiple opponents and carve open defences in an unorthodox style.

Sarr also has a penchant for the spectacular. His thunderous Europa League strike is just one example on a growing highlight reel, with a spectacular volley for Metz against Caen and a driving run and finish against Nancy last season demonstrating his vast and eye-catching skills.

There is a trade-off to Sarr's unique creative ability: when what he tries doesn't come off, it often leads to Rennes losing possession; and at 20 and still learning when, where and how often to take such risks, he coughs up the ball more regularly than most top-level sides might be comfortable with.

Only 15 Ligue 1 attackers were dispossessed more frequently than the Senegalese last season. And although Sarr's passing accuracy was relatively high in 2017/18, at 79.7 per cent, it has dropped this term to just 69.9 per cent. However, he has become much more of a goal threat in the process, so perhaps such a drop-off is tolerable.

The other main downside to Sarr's game is that he is often guilty of either exaggerating contact or plainly making it up in order to win free-kicks and penalties for his side.

“I can tell you, because I looked at the images ten times, it's an imaginary penalty,” raged Troyes manager Jean-Louis Garcia after Sarr won a dubious spot kick against his side last season. “It's simulation from Sarr.

“It's not the first time,” added Garcia. “I love this player, he's full of qualities [but] we’ve seen a video montage of this player and we see that he often falls voluntarily in the box, he does it regularly.” 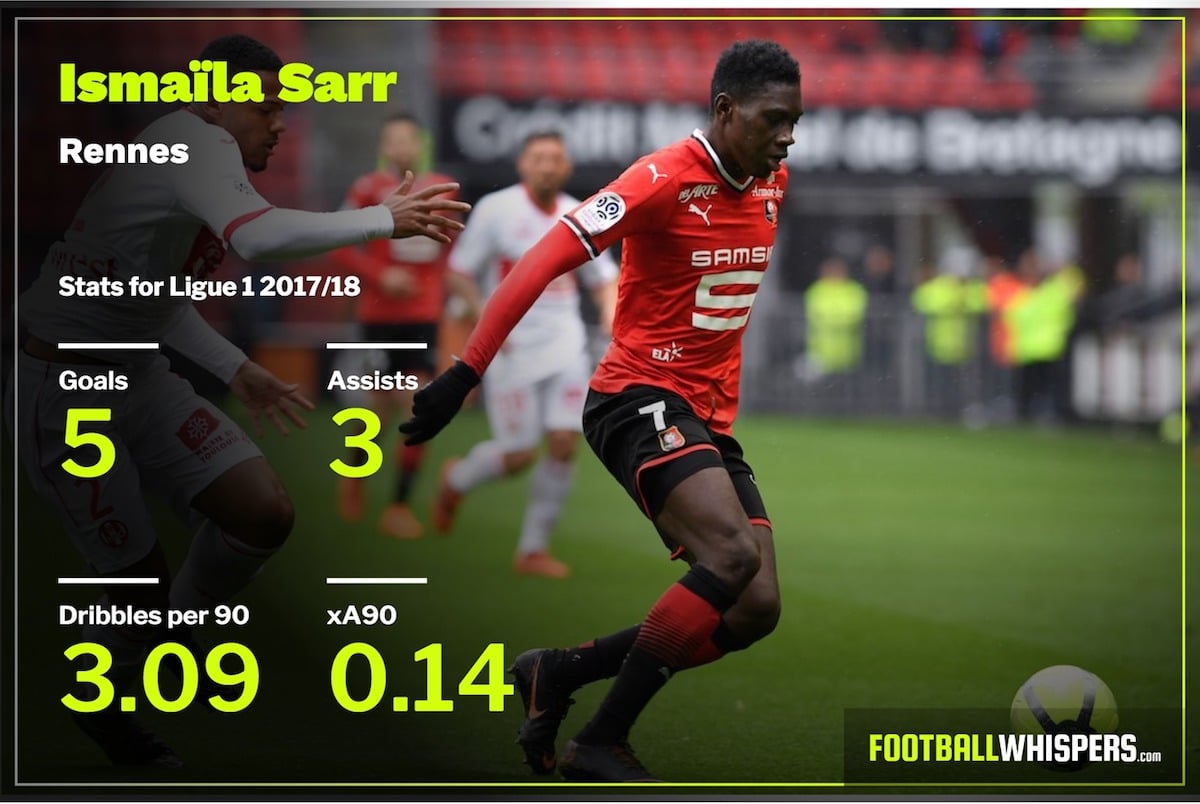 How much will the winger cost?

Recent reports have suggested Rennes' asking price for their in-demand winger is just £20million. But, given how much they paid to sign him from Metz little over a year ago and the exorbitant fees being splashed by major clubs, the French club will surely want to see a much greater return on their investment.

Sarr's agent, Thierno Seydi, recently told The Sun it will take an offer of €50-60million to sign his client, which seems a more likely scenario.

Where is Sarr's most likely destination?

“I have received many calls from English and German clubs and maybe even one from Italy,” Seydi also told The Sun.

“Many agents from the UK have called me proposing to work with them and Ismaïla to get him to the Premier League.

“One Italian agent asked to speak with Juventus.

“We are talking about a great football player, who will play at the highest levels for the next ten years.

“I am open to discussions with all top European clubs. The important thing is that he goes in a team that makes him play.”

If he continues his impressive start to the 2018/19 campaign, Sarr could become one of the most sought-after players in Europe next summer, if he hasn't already been snapped up in January, that is.