When José Mourinho talks, the world listens. Or so the Portuguese thinks. Out of work since being sacked by Manchester United in December, he's had plenty of time to share his pearls of wisdom.

“If I speak [about players] I think that their agents will be very happy,” Mourinho told French radio station RMC last month. “But, for example, I like [Nice winger] Allan Saint-Maximin, I like his speed.

“And I think Ismäila Sarr has a little bit of [Ousmane] Dembélé in him. There are a lot of players in Ligue 1 who have great potential.”

Sarr is a name which Premier League fans might already be au fait with thanks to persistent reports of a switch to England. Arsenal, Leicester City and Watford are three clubs who have been linked consistently.

The latest claims are Sarr's current club, Rennes, will demand €50million for the 21-year-old wideman who has just three seasons of first-team football behind him totally 110 appearances.

So what is all the fuss about and who would Sarr be the best fit for? We've taken a closer look…

What makes Ismäila Sarr so good? 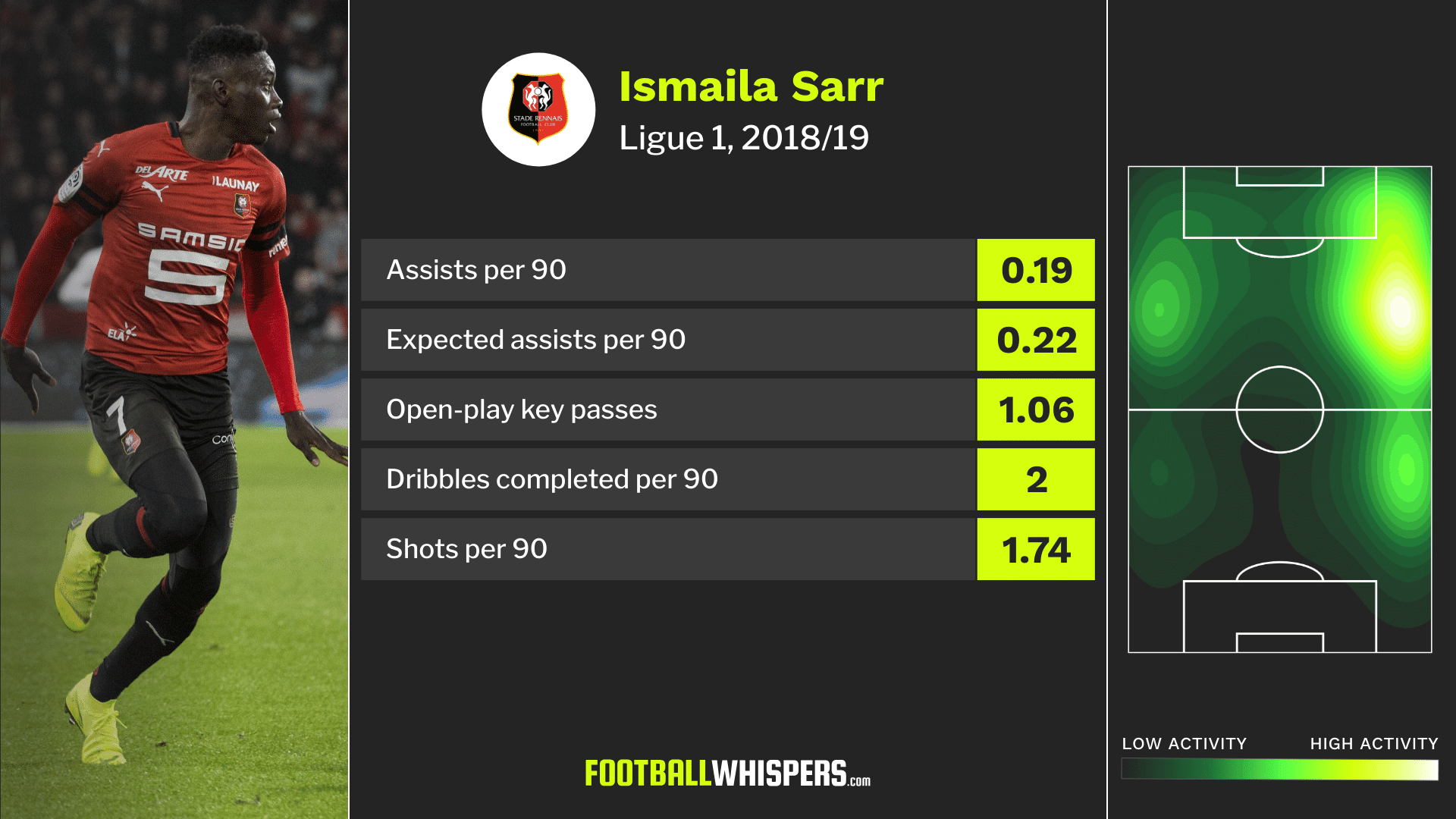 The Senegalese international is the kind of player supporters pay to watch. Comfortable on either flank and using both feet, the speedy winger takes defenders on for fun, regularly beating them, and causes havoc for opposing backlines.

This is borne out in Sarr's Player Persona (below). Exclusive to Football Whispers, Player Personas are a visual representation of a players traits and characteristics based on their statistical output.

The most impressive thing is Sarr has an end product too. He created 0.35 big chances per 90 last term, putting him tenth among his peers, while he supplied six assists – the seventh-highest return for a forward in France's top flight.

He also weighed in with eight goals in the league, out-scoring his seasonal expected goals total of 6.31 and his post-shot xG (which measures on-target efforts only) of 7.12.

That is almost certainly due to his penchant for the spectacular which saw him net a ferocious, rising volley against Jablonec in the Europa League last season (below).  A different competition, yes, but an indicator of the kind of chances the young forwards takes on – and scores.

Unsurprisingly, given his style of play, Sarr is prone to losing possession too. On average, he surrendered the ball 2.15 times per 90, putting him 18th in Ligue 1.

Where would Sarr fit best?

Using Football Whispers' Team Persona model we can contrast the differing styles of Sarr's current club, Rennes, and the three sides linked with a move for him this summer: Arsenal, Leicester and Watford.

The visualisation shows us their styles of play differ significantly. Unsurprisingly, the Gunners' dominate possession. They also complete the second-fewest crosses (3.31) per 90 of the four sides.

Watford, meanwhile, are less about holding onto the ball and more going long with searching passes aimed towards their physical front pairing of Troy Deeney and Andre Gray. At just 24.98m, the Hornets' average width of possession is also the narrowest.

However, Leicester place a far greater emphasis on getting the ball wide and putting crosses into the penalty area. In fact, with 4.39 completed per 90, they have the highest average. The average width of their possession (27.18m) is just behind Rennes' 28.59m too.

Where is Sarr's most likely destination?

The quoted price for Sarr is potentially prohibitive for all three clubs. Arsenal have an infamously tight budget this summer – with some reports claiming Unai Emery will have only £45million to spend – though Rennes will surely have to lower their demands if they want to cash in on their prized asset.

Watford, too, will simply not reach that kind of price. At £18.5million, Gray is their record signing and Gino Pozzo, the club's owner, has been burned by that experience. Leicester, therefore, might be the most likely destination for Sarr.

The Foxes could lose Virgil van Dijk to bring the England international to the Etihad Stadium. That would raise the necessary funds to complete a deal.

However, despite seeing Riyad Mahrez join the champions 12 months ago, Brendan Rodgers' side are well stocked in the wide areas with youngsters Demarai Gray and Harvey Barnes impressing last season, supplemented by Marc Albrighton and Rachid Ghezzal. Adding another exciting young wide player into the mix would surely halt their progress and Leicester's hierarchy are unlikely to support that. All of which suggests a tricky market for Sarr.

Mourinho might think agents will be ‘very happy' to hear him talking about their clients. But he will have to talk Sarr up a bit more if the Rennes forward is to secure a Premier League switch any time soon.