Down the years, Arsenal have fielded their fair share of Pointless answers in the League Cup.

Just this season, you could find a young defender by the name of Julio Pleguezuelo featuring against Blackpool. Is this an Arsenal game or Pro Evo from back in the day?

There have been others, of course. Jeff Reine-Adélaïde, who may or may not sound like a True Detective character, Ben Sheaf (no, me neither), Danny Karbassiyoon, Jay Simpson, Mark Randall, Fran Mérida…

These are all blink-and-you'll-miss-them cameos in the Arsenal story. A lot of them are one-and-done players; they flicker into existence during a League Cup game against a Barnet or Blackpool and then disappear into the football matrix.

Sometimes, though, the matrix spits something back. One player who doesn't seem hindered by his five minutes of Arsenal fame is Ismaël Bennacer.

Bennacer made his solitary Gunners appearance in, you guessed it, the League Cup a few years back, replacing Theo Walcott during a dismal 3-0 defeat to Sheffield Wednesday in October 2015.

He never made another senior appearance and after a loan spell with French side Tours, he joined Empoli in the summer of 2017.

It seemed as though Bennacer's Arsenal story was finished before it had even started.

However, while the club have splurged on shiny new things like Alexandre Lacazette and Pierre-Emerick Aubameyang – who cost over £100million combined – Bennacer has quietly forged a reputation as one of Italian football's up-and-coming midfielders.

Now, in a stunning twist, rumblings in the rumour mill suggest Arsenal have a buyback clause and are thinking of triggering it.

French outlet Le10Sport, via the fine folk at Sport Witness, claim Napoli are also interested, so Arsenal may face stiff competition from the side they're poised to knock out of the Europa League.

Still only 21 years old, the Algeria international helped Empoli to promotion to Serie A last season. And he's taken his chance to shine at Italy's top table.

Despite Empoli's struggles – they're two points from safety with six games remaining at the time of writing – Bennacer has more than done his part to retain Gli Azzurri's top-flight status.

Deployed as a deep-lying midfielder, he has excelled in two key areas: ball-winning and chance creation.

Empoli enjoy a fair share of the ball for a side languishing in the relegation zone, averaging 47.9 per cent of possession.

That has allowed Bennacer a reasonable amount of time to influence games. Empoli are predominantly shaped in a flat 3-5-2, with the No.10 partnering Hamed Traoré and Rade Krunić in midfield.

They make a fairly impressive trio. Traoré, who only turned 19 in February, is set for pastures greener, having signed for Fiorentina before being loaned back to help Empoli in their bid to avoid relegation.

Krunić, the 25-year-old Bosnian, has also enjoyed a fine season, with five goals and six assists. 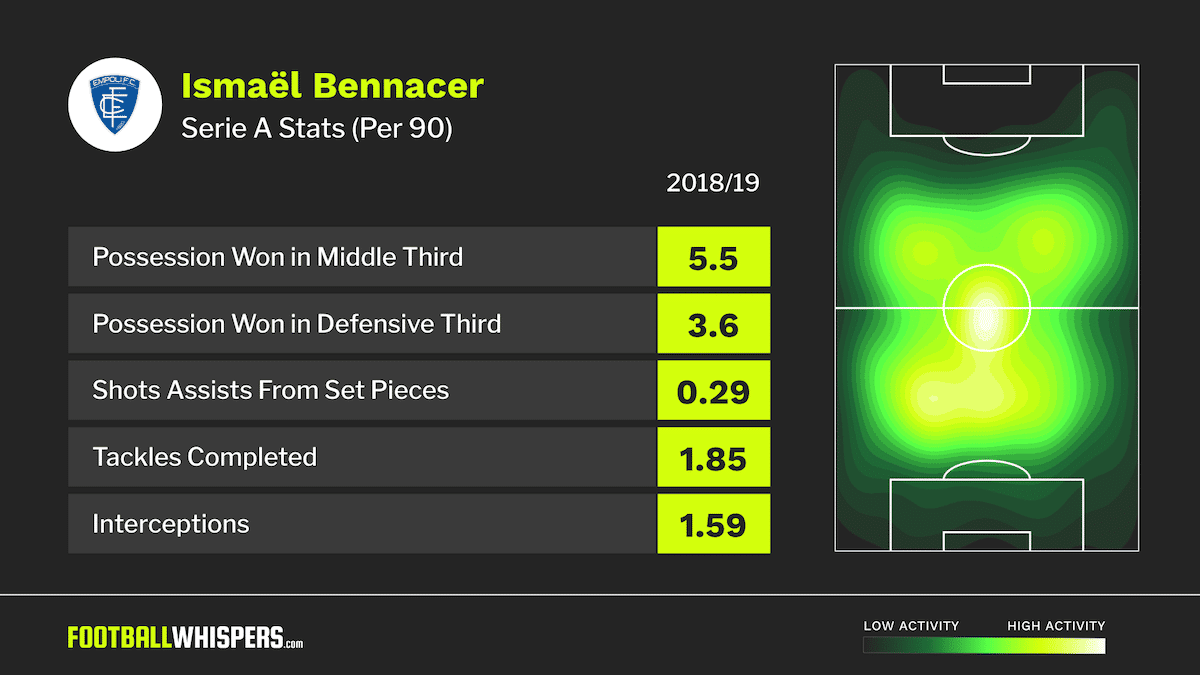 Bennacer has kept pace nicely. Although he is yet to score, he has contributed to five goals and has established himself as one of Serie A's most accomplished ball-winners.

In fact, he's won possession in the middle and defensive third, 148 and 97 times respectively, more than any other midfielder this season, as per the Football Whispers Lab.

He also loves a tackle, completing 50 of the 82 he's attempted. Overall, he's won 201 defensive duels, thus emphatically ending any lazy ‘can he handle the muck and bullets of the Premier League' debate.

Bennacer certainly sounds familiar. Yes, he used to play for Arsenal but he bears striking similarities to Lucas Torreira, the last feisty ball-winning midfielder the Gunners plucked from Italy.

The Uruguayan has settled impressively under Unai Emery this season and Bennacer, whose player persona is not a million miles off (as shown below), appears to have the talent and mentality to thrive under the Spaniard.

With Aaron Ramsey off to Juventus, Bennacer is one of several names being touted as a potential replacement. He's not the same player as Ramsey, of course, but the Algerian has the creativity to be deployed further forward in midfield and the tenacity and nous to slot into a deeper berth.

With the Welshman set to leave, Mohamed Elneny and Mesut Özil potentially joining him and the existence of a buyback clause, Bennacer is a low-risk, high-potential experiment for Arsenal.

Not everyone gets lost in the matrix.