The flirting between Islam Slimani and Watford has been nearly as blatant as Marco Silva's fluttering of his eyelashes when Everton‘s interest became clear.

Slimani, who is Leicester City‘s record signing at a whopping £29million, is out of favour at the King Power Stadium for the third manager in succession and it seems inevitable he will leave.

The Algerian worked under Silva at Sporting and was a Watford transfer target last summer – that much he was happy to admit.

“I had a conversation with Marco Silva, who was my coach at Sporting, and he was very interested in having me on the team,” Slimani explained in October.

“He presented me with a magnificent project, but unfortunately it did not materialise. The leaders of Leicester City told me they wanted me here.”

But things have changed since then, including the Foxes' manager. Claude Puel is now in charge and the Frenchman has been steadfast in his assertion there are too many strikers knocking around the King Power Stadium.

“For Slimani, I cannot give all the ties about an individual player,” Puel said on Thursday.

“I repeat, since the beginning, that we have a lot of strikers. We need to make a good balance for the team, to give game time for all the players.

“We will see if some players can win some game time at other clubs but we have to discuss with these players.”

With Jamie Vardy, Shinji Okazaki and Kelechi Iheanacho all ahead of him, Slimani's future lies away from Leicester. Ahmed Musa and Leonardo Ulloa are still on the books, too, giving Puel six first-team strikers to select from.

But whether Watford will be his next destination remains unclear. The Hornets released a timely and pointed interview with technical director Filippo Giraldi stating the club were happy with the current squad and saw January as the chance to rectify mistakes.

That is not a view echoed by Silva who has had to perform an embarrassing comedown after freezing out Stefano Okaka. Captain Troy Deeney has been some way short of his best, netting just two penalties, while £18.5million club-record signing Andre Gray has struggled for goals, too, scoring just four times.

In terms of the most obvious measure, goals, Slimani has scored just once in the Premier League this term and is performing marginally below his xG of 1.31. But given he has been afforded just one league start this season and totalled a mere 241 minutes of top-flight action, it is too small a sample size from which to draw any wide-ranging conclusions.

In fact, only Gray, with an xG of 5.50, has played anything like enough minutes (1,201) to start looking for trends. Deeney (676) and Okaka (224) have both been out of the side more often than not with Gray preferred.

Perhaps, then, it is better to assess Slimani's worth by what he contributes in terms of build-up and bringing others into play. At a burly 6ft 2in, the Algerian international has the kind of physique which would make him an ideal partner for the more nimble Gray, or to play as an out-and-out line leader.

Despite being restricted to a substitute's brief for much of the campaign, Slimani is second to Gray (1.52) for expected assists (xA) with 1.31. While the Hornets forward has over performed by suppling two, he has done so in nearly five times as many minutes on the field. 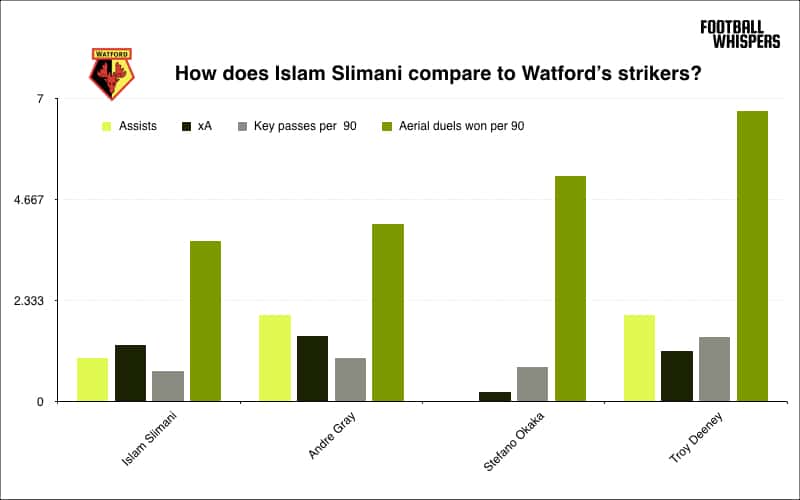 However, given the relatively small sample sizes for all, there is little to be gleaned. For that reason we've also looked at the four players' numbers for the entire of the 2016/17 Premier League campaign in the hope they will offer a more accurate and insightful reflection of their worth.

From a Watford perspective, Slimani's numbers for last season – his first in England – make much more encouraging reading. His seven goals came from just 13 shots on target. Gray, with nine goals, had the most shots on target with 19 but his ratio of a goal every 2.1 shots trails Slimani's return of one every 1.85 shots.

In fact, only Deeney, with ten goals from 18 efforts on target, can better that with 1.8 shots per goal. But the Watford captain's numbers are enhanced by the fact three of his efforts last season were penalties. Gray scored two from 12 yards while Slimani managed just one. 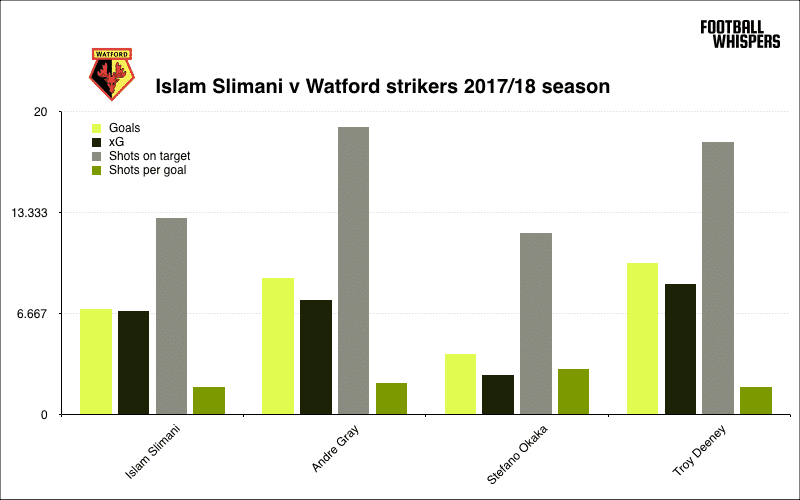 Whether Slimani is a good fit for the Hornets is another matter altogether. Silva has stuck obdurately to playing one striker this season in spite of evidence to suggest playing a front two would be more beneficial.

Indeed, in last weekend's comeback draw against Southampton, the Hornets looked most threatening with Gray and Deeney partnered up top together only for Silva to withdraw the former after his header sparked the comeback.

Okaka is not wanted by Silva, that much is clear. Linked with a move to France by his agent brother, the Italian international has been out of favour under Silva since the opening day of the season. So Slimani's arrival would either pave the way for the former Roma striker to leave or fill the sizeable gap he leaves behind.

As luck would have it, Watford head to Leicester City this weekend. Perhaps when the two managers embrace for the traditional pre-match handshake the topic of conversation, however briefly, will turn to Slimani?