Is it even a transfer window if Tottenham Hotspur aren’t linked with Isco?

For the past few years now, Spurs have been linked with a move for the playmaker. These links usually coincide with the former Málaga maestro having a tough time in the Spanish capital and end with him being restored to the Real Madrid starting XI.

But this time, it could be different.

According to reports in Spain, the beaten Champions League finalists are once again looking at signing the 27-year-old. Unlike in previous years, Mauricio Pochettino does need to add a creative midfielder to his ranks with Christian Eriksen set to leave on a free transfer at the end of the season.

Furthermore, Real Madrid are reportedly the favourites to land the Denmark international. A move that would see Isco surplus to requirements at the Santiago Bernabeu.

Swap deals are rare in football and though this wouldn’t be an official swap, Isco’s potential move to the Premier League will hinge on whether or not Eriksen opts for Madrid ahead of Juventus, with the Serie A champions also keen on the soon-to-be-free midfield dictator.

For the first time ever, Spurs have a genuine need for Isco, with a creative void left to fill in their team, and the Real Madrid No.22 seriously needs to weigh up his options now that Los Blancos are keen to freshen up their final third.

While signing a player of Isco’s calibre would’ve been a statement of intent for Spurs a couple of years back, Pochettino’s men have improved dramatically. That isn’t to say the fleet-footed Spaniard wouldn’t be a welcome addition. But due diligence will need to be thorough.

Eriksen has been a mainstay in Tottenham's starting XI. He’s a creative hub for Pochettino and a consistent supply line for Harry Kane. Isco, on the other hand, hasn’t played more than 2,000 minutes in a single LaLiga season since 2014/15. Perhaps a victim of the erratic nature of Real Madrid president Florentino Pérez, injuries have also played a part in his limited appearances over years.

Despite his copious amounts of experience, Isco is an unknown. 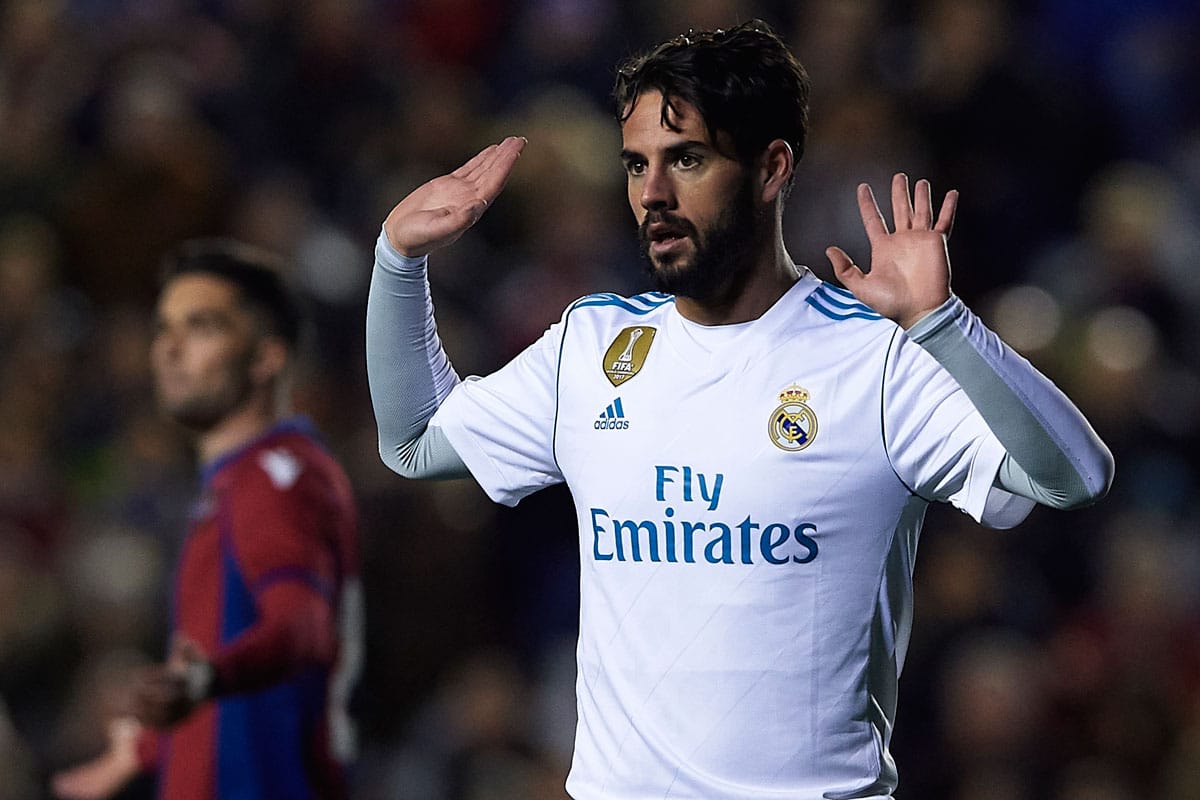 Nobody knows if he can be an almost ever-present throughout the season. And Spurs already have a player with those questions marks hanging over him in Kane.

Equally, nobody actually knows whether Isco’s style would suit the Premier League. Yes, he’s put on a show in LaLiga over the years but Spain is a three-team league. It’s easier to dominate there whereas in England you have six teams battling for four spots and then another four teams trying to break into the top six.

These questions balance out the fact

“He is a fantastic player, with an incredible talent. For many years he has been doing things very well and he is playing for one of the best teams in the world. He is an important player not just in the national team but in his club. He is young and has many years to grow and improve.”

The uncertainty counteracts Zinedine Zidane’s decision to tweak his entire system to fit Isco into the team a few years back. The French tactician appeared married to the 4-3-3 shape before his No.22 started to steal the show. After that, Real Madrid started to use a diamond midfield with Isco at the tip.

From there, Isco was able intelligently ghost his way into positions to act as a springboard for Cristiano Ronaldo and Karim Benzema. He wasn’t just playing simplistic one-twos, he was often creating something out of nothing. The Spaniard was everything you'd want from a No.10 – and more.

Isco’s form carried over into the 2017/18 season and he was rewarded with a new bumper contract, agreeing to extend his stay in the Spanish capital until 2022, with his release clause was set at an eye-watering €700million. It appeared as though he was finally getting the backing a player of his ability deserved.

That now feels like a lifetime ago. Despite this, however, Real Madrid wouldn't let Isco leave on the cheap without assurances that Eriksen would be heading in the opposite direction in the near future. The threat of losing an £80million star for nothing shouldn't force Spurs into doing something that doesn't make business sense though.

Such a swap could see the Premier League side lumped with a high earner who fails to adapt. Yes, they'd be bagging themselves a potentially world-class star but he's that in name more so than reputation at the minute. And unless he's a perfect fit, there's no guarantee Isco from 2017/18 ever makes an appearance for Spurs.

Think Alexis Sánchez at Manchester United. Though it's hard to envisage any transfer going as badly as that one did, Isco to Spurs isn't the game-changer it would've been a couple of years back. If Levy and Pochettino do decide to cash in on Eriksen in January, the money shouldn't be spent on the Spanish midfielder.