“He is a fantastic player, with an incredible talent. For many years he has been doing things very well and he is playing for one of the best teams in the world. He is an important player not just in the national team but in his club. He is young and has many years to grow and improve.”

At the time, the midfield maestro was pulling the strings for Zinedine Zidane’s men. He was playing the best football of his career and it appeared as though he was finally fulfilling the abundance of potential many believed he had as a youngster.

After all, Real Madrid don’t part with €30million for 21-year-olds on a regular basis, but this was the case in June 2013. Isco, starring for Málaga at the time, was tipped to follow manager Mauricio Pellegrini to Manchester City but opted to stay in La Liga, thus becoming Carlo Ancelotti’s first signing as manager of Los Blancos.

Life in the Spanish capital got off to a good start. Isco came off the bench against Real Betis to grab an assist before heading home the winner in the 85th minute. He continued to have an impact when on the pitch but starts were scarce. Ancelotti favoured a 4-3-3 system and there was no obvious place for Isco.

The Real Madrid boss called it “a temporary problem”. True to his word, the former AC Milan manager did find a way to include the creator, and Isco finished the 2013/14 season having featured in 2001 minutes of La Liga football – the equivalent of 22 full 90-minute matches. And he was involved in 14 goals – a good haul for a debut season.

The following season saw him appear in over 3000 minutes in all competitions due to injuries to Real Madrid players. However, more often than not he was shoehorned into the team. Isco wasn't playing in a position to get the best out of him and his consistency suffered. For a period, he was being likened to Zinedine Zidane, then the next week he was being criticised. The Spaniard finished the campaign with four goals and nine assists.

Rafael Benítez replaced Ancelotti at the Santiago Bernabéu ahead of the 2015/16 season and had his own vision for the Madrid midfield. It included Isco, but only as a squad player. The ex-Liverpool boss was replaced by Zidane in December. The team went on to win the Champions League again, but Isco played fewer minutes for Madrid than he had in any of the previous seasons.

The summer transfer window of 2016 saw Tottenham Hotspur emerge as a potential destination for the Valencia academy graduate. Reports claimed that Zidane's men needed to trim their squad and one of Isco or James Rodríguez would be shown the exit door due to the emergence of Chelsea transfer target Marco Asensio.

Spurs left it late in the window and wanted to loan Isco. A move failed to materialise and he remained in Spain. The 2016/17 season was a strange one for the 25-year-old: he played fewer minutes (1638 in La Liga) but had his most productive season, for both club and country. 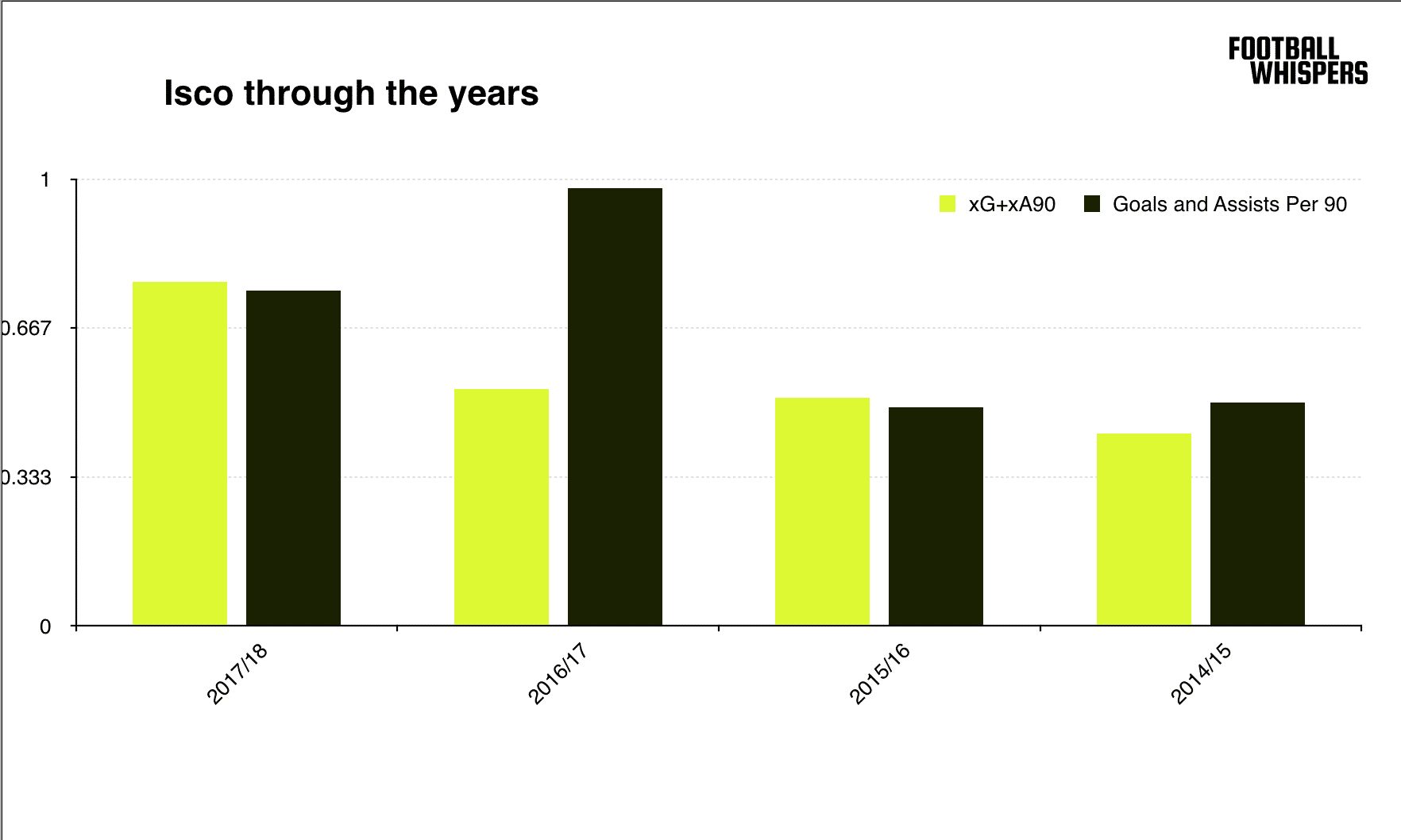 Not to be shown up by Asensio, the new poster boy of Spanish football, Isco made the most of an injury to Gareth Bale to show he'd matured as a player. He'd seen off Rodríguez and Ángel Di María, he wasn't going to let the fresh-faced boy wonder be the one to bring his Madrid career to a premature end.

Isco was no longer inconsistent. He was dictating games and showing on a regular basis how he could be a difference maker of one of the biggest teams in the world.

His eye-catching form resulted in Zidane changing his system to accommodate the former Málaga star. The Frenchman moved away from the usual 4-3-3 to more of a diamond midfield, with Isco at the tip. He flourished.

As you can see in the graphic above, he was outperforming his expected goals and assists per 90. In terms of output he's always been consistent but last season, when the team was built around him, he put on a masterclass.

The freedom he was afforded as a No.10 saw his game go up another level – he wasn't just shackled to a certain part of the pitch; he was dropping deep to take the ball off of the defenders before weaving his way past the opposition and breaking the defensive lines.

Isco was then gliding over the ground and intelligently ghosting his way into positions to act as a springboard for the likes of Cristiano Ronaldo and Karim Benzema. He wasn't just playing simplistic one-twos, he was often creating something out of nothing. 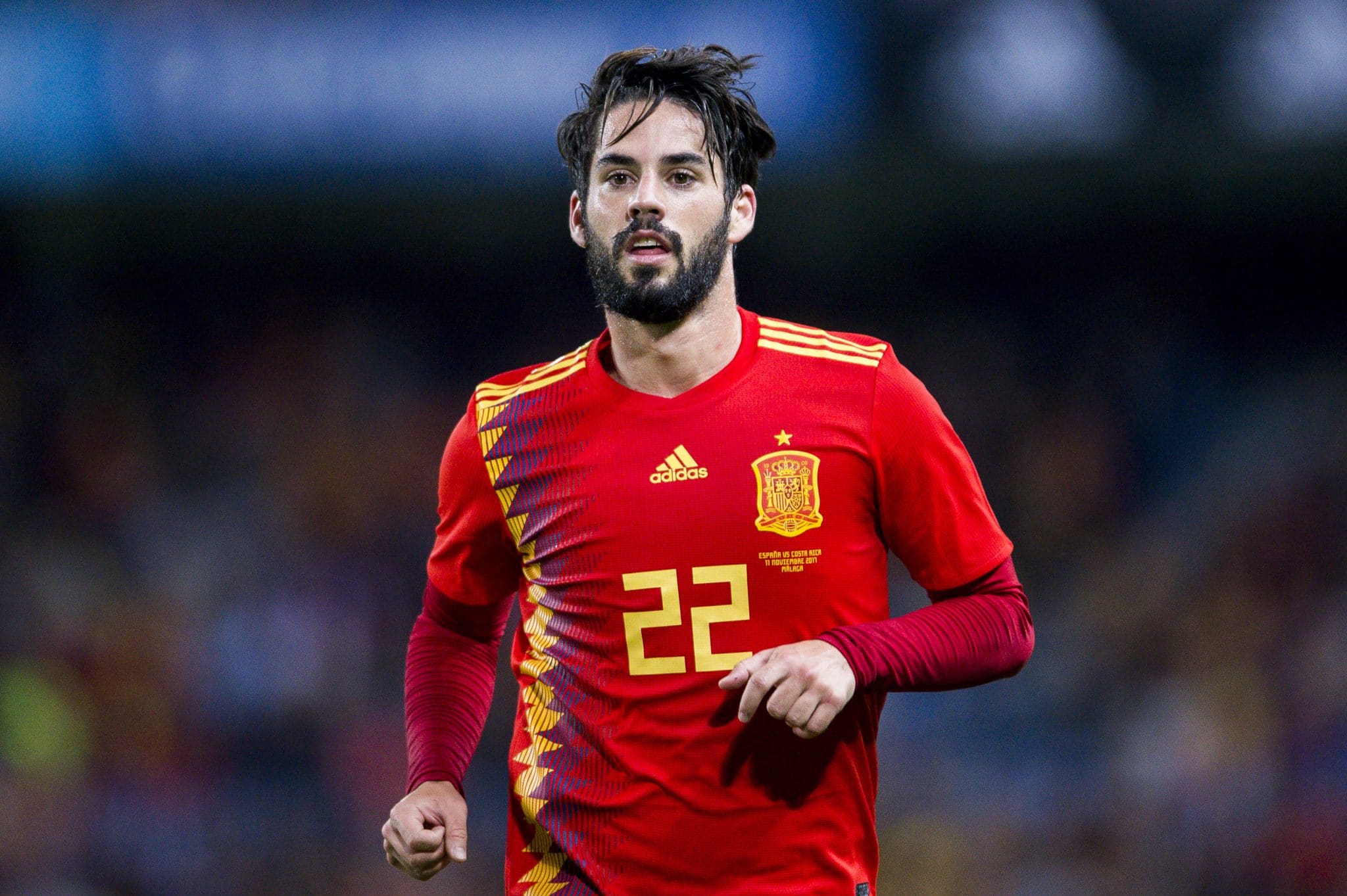 The Spaniard was everything you wanted from a No.10 and more.

Isco's form carried over into the 2017/18 season and he was rewarded with a new bumper contract, agreeing to extend his stay in the Spanish capital until 2022, with his release clause was set at an eye-watering €700million. It appeared as though he was finally getting the backing a player of his ability deserved.

The new deal with the Spanish giants game just two weeks after he put on a masterclass for the national team against Italy. It's rare a manager of a team so well-beaten finds time to praise a player from the opposition, but Gian Piero Ventura did just that.

“All I can think about is that nutmeg he pulled off in midfield. When I saw it, all I could do was applaud. He's a rival, he's on the opposing team, but I am just as much a lover of the beautiful things in this game as anyone.”

The 25-year-old was thriving in the limelight, but Isco's bubble soon burst. Bale's return to full fitness saw Zidane, under pressure after a poor run of form, revert back to the 4-3-3 system; the playmaker was no longer part of the starting XI.

Results for the club have improved recently but on a personal level it's been frustrating for Isco. Since the turn of the year he's made just three starts – one of which was the 2-1 defeat to Leganés.

According to reports, Zidane, fighting for his job in the Spanish capital, has said he will look to sell Isco if he's still in charge next summer. The Real Madrid manager feels let down after placing his trust in the playmaker. 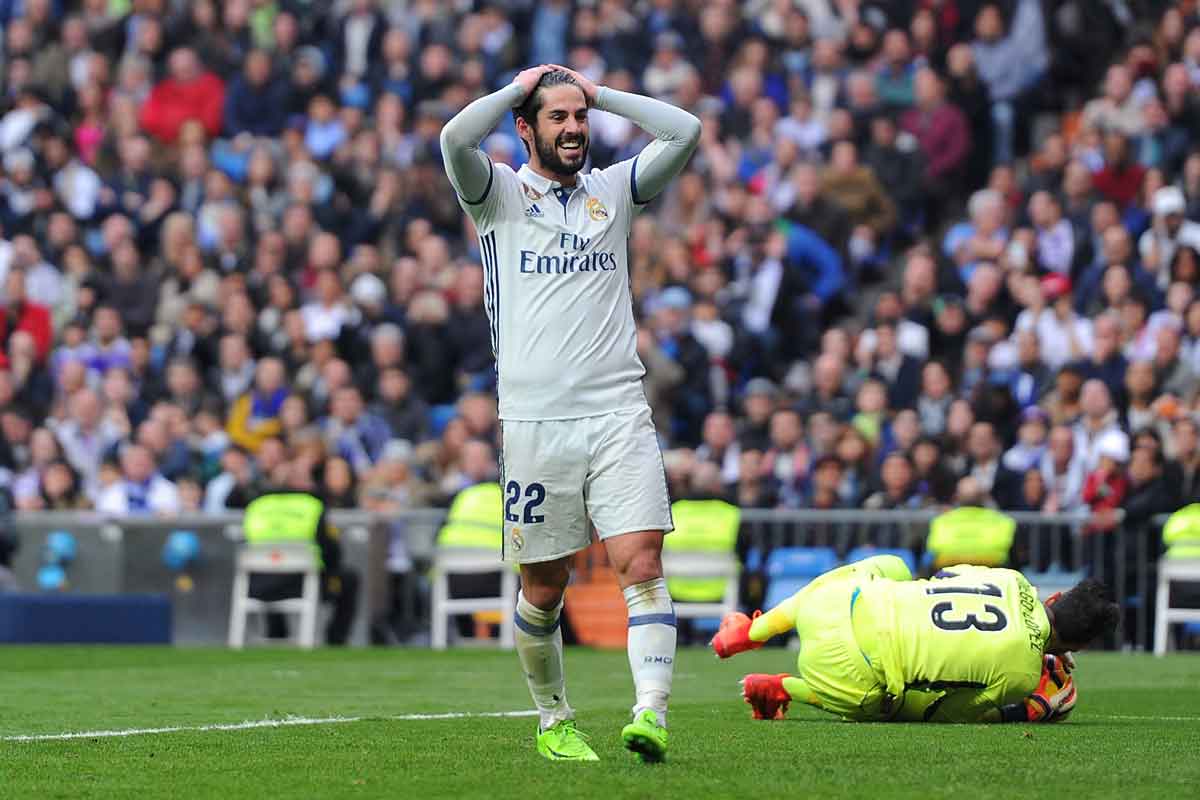 The French tactician signed off on the club loaning Rodríguez to Bayern Munich, believing he could finally rely on Isco, but the Spaniard's performances in recent months have flattered to deceive. Furthermore, there are rumblings that he's failing to carry out instructions and it's having a negative impact on the team.

The news that the Real Madrid No.22 could be up for grabs has a host of Premier League clubs on high alert. Liverpool, Manchester City and Arsenal are said to be interested and want to be part of any conversation. Why wouldn't they? It's rare a player of Isco's calibre is available for transfer. AS also claim Juventus and Bayern Munich could be two potential destinations for the playmaker.

Jürgen Klopp needs a replacement for Philippe Coutinho. Isco offers the same versatility as the Brazilian and would be a lock pick against those low block teams Liverpool regularly struggle against.

Man City, who tried to sign Riyad Mahrez before the window shut, clearly feel as though they need to bolster their attacking ranks. Isco would be a long-term replacement for compatriot David Silva.

Arsenal, well they're spoilt for choice in attack now after signing Henrikh Mkhitaryan and Pierre-Emerick Aubameyang. If they add Isco to their ranks then they really would have the most creative attack in Europe.

It really is make or break for Isco if he's to push on and be part of Europe's elite; if he gets his next move wrong then he'll go down as one of many ‘what if' players.

Isco has showed for Real Madrid that, when given consistent minutes in a set position, he can be one of the best in the world. He's isn't the first player to not be suited to the La Liga champions and he won't be the last, but being deemed surplus to requirements at the Santiago Bernabéu doesn't make you a bad player. A top team in Europe is going to grab themselves a bargain this summer.